High-intensity femtosecond pulses of laser light can undergo cycles of Kerr self-focusing and plasma defocusing, propagating an intense sub-millimeter-diameter beam over long distances. We describe a technique for generating and using these filaments to perform remote imaging and sensing beyond the classical diffraction limits of linear optics.

Probing remote matter with laser light is a ubiquitous technique used in circumstances as diverse as laser-induced breakdown spectroscopy and barcode scanners. In classical optics, the intensity that can be brought to bear on a remote target is limited by the spot size of the laser at the distance of the target. This spot size has a lower bound determined by the diffraction limit of classical optics. However, amplified femtosecond laser pulses generate intensity sufficient to modify the refractive index of the ambient air and undergo self-focusing. This self-focusing effect leads to the generation of highly intense laser filaments which maintain their intensity and small sub-millimeter diameter size at distances well beyond the classical Rayleigh length. Such intensity provides the capability of remote scanning, imaging, sensing, and spectroscopy with enhanced spatial resolution. We describe a technique for generating filaments with a femtosecond regenerative chirped-pulse amplifier, and for using the resulting filament to conduct imaging and spectroscopic measurements at remote distances of at least several meters.

The spatial coherence and corresponding small divergence angle of laser beams have led to numerous applications in remote sensing, including chemically-sensitive measurements of the atmosphere1,2, range-finding3, and remote spectroscopy4. The same coherence properties allow very tight focusing of laser light that can deliver continuous focused intensities of billions of watts per square centimeter and pulsed intensities of 1013 watts per square centimeter over a period of a few femtoseconds. Such extreme intensities are useful for numerous applications including examining the nonlinear optical properties of matter5, precision optical micromachining6, materials characterization through laser-induced-breakdown spectroscopy7, stimulated Raman spectroscopy8,9,10, and trace chemical detection11.

However, the physical limitations of Gaussian beams set limits on the ability to apply these properties of extreme intensity and small divergence angle simultaneously. A laser beam focused to a small spot size will necessarily diverge with a greater angle. Classically, the beam divergence angle is given by , where λ is the wavelength and w0 is the radius of the beam waist. Since the divergence angle is set by the diameter of the laser beam and the focal length f of the focusing lens, , and tight focusing is not possible at distances of many meters as f becomes large compared to d.

Workers in the field of amplified femtosecond pulses noticed that this limitation on intensity vs. range was violated for high-intensity femtosecond pulses, with burn marks smaller than the diffraction limit appearing on targets at large distance from the originating laser12. This was found to be due to Kerr-effect self-focusing. The refractive index of the air is modified in proportion to the intensity of the laser field, and when the laser has a Gaussian intensity profile, the resulting refractive intensity profile becomes functionally a lens5. The beam self-focuses as it propagates, resulting in a narrow and intense filament of less than 100 µm radius whose small size is maintained by a dynamic balance among classical diffraction, Kerr self-focusing, and defocusing due to plasma generation13.

With femtosecond laser filaments, intensities on the order of 1013 W/cm2 can be delivered to targets at distances of many meters with commercially-available femtosecond chirped-pulse amplifiers. Thus, many experiments which previously required tight focusing conditions and targets very close to a lens of high numerical aperture can now be done at distance more typical of remote sensing applications. However, intensities much higher than this threshold are not easily possible with filamentation, as the beam tends to break up into multiple filaments where each individual filament is near the critical power for self-focusing13.

Numerous applications are possible. We present a protocol primarily applicable to imaging and spectroscopy of remote targets using a femtosecond laser filament scanned over the target surface. The experimental setup is shown in Figure 1.

1. Creation of the Femtosecond Laser Filament

2. Remote Scanning of the Target Surface

The resolution of the scanned images is limited optically only by the ~100 µm. Therefore, the translation stage motion should be of this order of magnitude or smaller for maximum resolution. However, this level of resolution is not necessary for all measurements. This protocol has been used for both imaging14 and spectroscopic15 measurements. Figure 1 shows the experimental setup. The pulse is generated in an amplifier system. The pulse is 1 kHz, 50 fs, and centered at 800 nm. Figure 2 compares a scan of a small Texas A&M logo target taken with a laser at the diffraction limit compared to a scan taken with a filament-forming beam. This experiment was performed using filaments in liquid water, but the results may be rescaled for air in remote sensing13. Figure 3 shows spatially-resolved filament-induced breakdown spectroscopy scans of metal objects of different composition buried approximately two millimeters below a layer of sand. The shapes and compositions of the metal objects are apparent. In general, filamentation provides a number of mechanisms for target effects. The initial pulse can provide information on the surface layer, while subsequent pulses can provide information on deeper portions of the material through ablation or mechanical removal of surface layers. 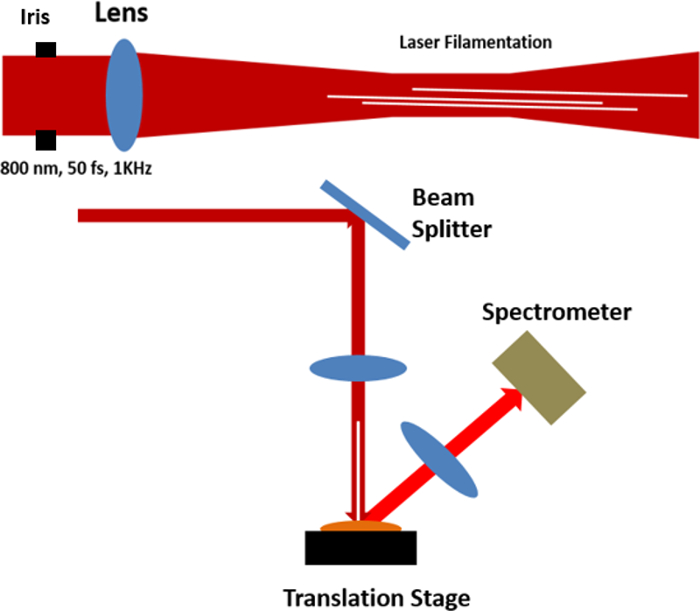 Figure 1. The experimental setup. The laser is 1 kHz, 50 fs, and centered at 800 nm. It is focused with a lens to reach the intensity (~1013 W/cm2) to form laser filaments. The object is under sand and put on a translation stage. The scattered light is collected with a spectrometer. Please click here to view a larger version of this figure. 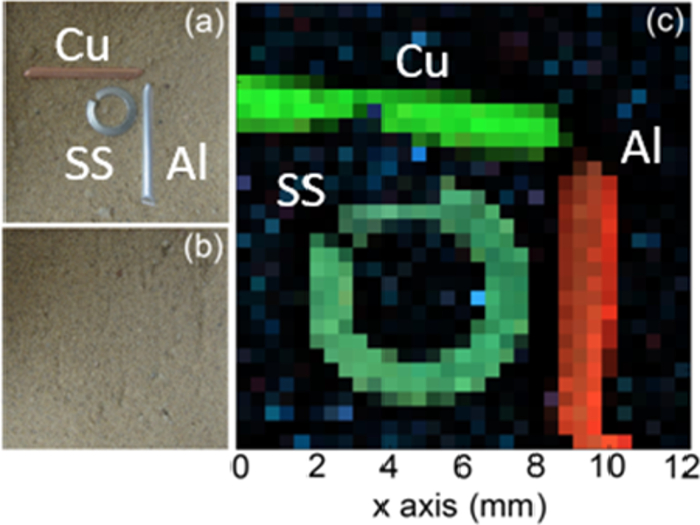 Figure 3. The chemical map. Spectrally and spatially resolved image of metal objects buried under sand. a) Objects above sand. b) Objects below 2.3 ± 0.3 mm of sand. c) Image with material composition color-coded to metal spectral features. Composite image of the buried objects with aluminum (Al), copper (Cu), and stainless steel (SS) corresponding to the red, green, and cyan color components, respectively Please click here to view a larger version of this figure.

The method presented above is a laboratory protocol for the use of high-intensity laser light delivered at classically intractable distances. Of the numerous possible applications of such light – CARS, FIBS, THz radiation, photoacoustics, superradiance, etc. – many applications can deliver point information about surface material properties. Femtosecond laser filaments with sub-classical-diffraction-limited spot size allows use of these techniques while scanning the surface on a point-by-point basis. This protocol is an ideal test bed for the development of such techniques.

This scanning technique is generally better suited for laboratory use and proof-of-concept rather than field deployment since remote sensing in the field generally does not allow fine translation-stage control of the target under investigation. In those scenarios the same lab-developed laser techniques can be used, but the laser itself will have to be scanned through more traditional beam steering methods such as changing the orientation of the laser apparatus itself.

The protocol could be relatively easily extended to involve experiments with multiple filaments, filament bundles, pump-probe experiments, standoff spectroscopy, waveguide, or numerous other possibilities. In each case, one of the major experimental hurdles is the alignment of the intersecting focal spots, but with this protocol, this need only be done once. The optical elements are fixed in place and the sample itself is the only object required to move. This can be done very precisely with a translation stage. Further modification of this protocol to achieve further control over the location of the filament formation distance, including filament formation at hundreds of meters from the laser, is possible in principle by careful control of the output laser pulse. Multi-filamentation will also form a waveguide during the propagation, which could help to deliver a light in free space.

Remote sensing is a broad subject that spans disciplines such as physics, chemistry, engineering, environmental science, etc. In the supplementary material, we propose additional remote sensing schemes including stand-off spectroscopy and superradiance in addition to filamentation. 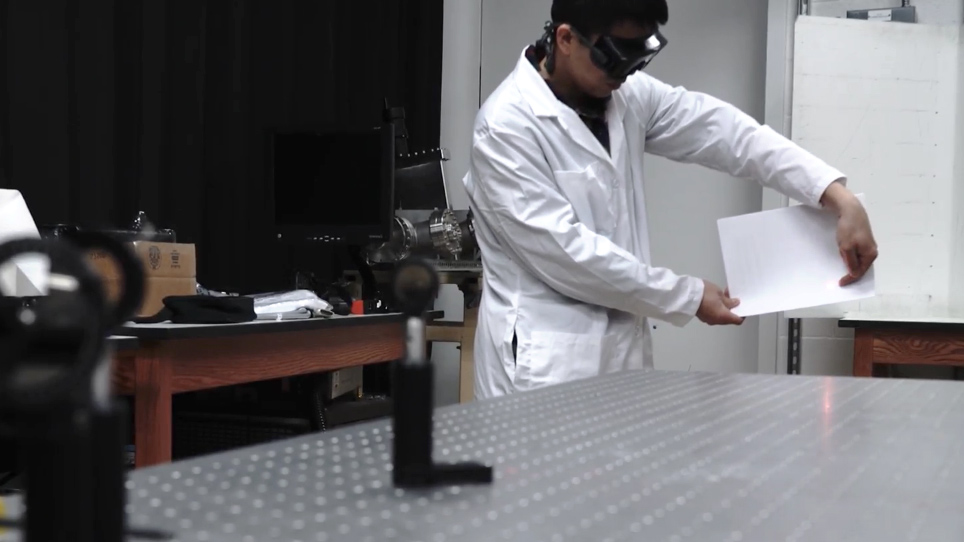