We describe the detailed protocol for the DNA origami-based assembly of gold nanorods into chiral plasmonic metamolecules with strong chiroptical responses. The protocol is not limited to chiral configurations and can be easily adapted for the fabrication of various plasmonic architectures.

The inherent addressability of DNA origami structures makes them ideal templates for the arrangement of metal nanoparticles into complex plasmonic nanostructures. The high spatial precision of a DNA origami-templated assembly allows controlling the coupling between plasmonic resonances of individual particles and enables tailoring optical properties of the constructed nanostructures. Recently, chiral plasmonic systems attracted a lot of attention due to the strong correlation between the spatial configuration of plasmonic assemblies and their optical responses (e.g., circular dichroism [CD]). In this protocol, we describe the whole workflow for the generation of DNA origami-based chiral assemblies of gold nanorods (AuNRs). The protocol includes a detailed description of the design principles and experimental procedures for the fabrication of DNA origami templates, the synthesis of AuNRs, and the assembly of origami-AuNR structures. In addition, the characterization of structures using transmission electron microscopy (TEM) and CD spectroscopy is included. The described protocol is not limited to chiral configurations and can be adapted for the construction of various plasmonic architectures.

DNA nanostructures, DNA origami in particular, have been widely used to arrange molecules and other nanoscale components (e.g., proteins and nanoparticles [NPs]), with nanometer precision into almost arbitrary geometries1,2,3,4,5. The ability to arrange metal NPs on DNA origami templates with a high yield and accuracy enables the fabrication of plasmonic structures with novel optical properties6,7,8,9,10. DNA origami technique is especially useful for the generation of chiral plasmonic structures, which require genuinely three-dimensional architectures11,12,13,14,15,16,17,18,19,20.

This protocol describes in detail the entire process of the fabrication of DNA origami-templated chiral assemblies of AuNRs. The software used for the design21 and structure prediction22,23 of DNA origami is intuitive and freely available. The origami fabrication and AuNR synthesis use common biochemistry lab equipment (e.g., thermocyclers, gel electrophoresis, hot plates, centrifuges). The structures are characterized using standard TEM and CD spectroscopy.

The fabrication of similar plasmonic nanostructures with top-down methods (e.g., electron beam lithography) would require rather complicated and expensive equipment. In addition, DNA origami templates provide the possibility to incorporate structural reconfigurability in plasmonic assemblies24,25,26,27,28,29,30,31,32,33, which is extremely challenging for structures fabricated with lithography techniques. Compared to other molecular-based approaches34,35,36,37, DNA origami-based fabrication provides a high level of spatial precision and programmability.

1. Design of the DNA origami

2. Assembly of the DNA origami templates

NOTE: The protocol for AuNR synthesis is adapted from previous literature40 with minor modifications.

NOTE: This section describes the protocol for AuNR functionalization with single-stranded DNA (ssDNA), following the so-called low pH route adapted from previous literature42. The AuNRs covered with DNA are purified by centrifugation; alternatively, the purification can be performed using agarose gel electrophoresis.

TEM images of DNA origami templates, AuNRs, and final origami-AuNR assemblies are shown in Figure 4, Figure 5, and Figure 6A, respectively. Due to their binding preference to TEM grids, origami-AuNR assemblies are usually seen as parallel origami bundles and rods (Figure 6A). Thermal annealing is required for the correct alignment of AuNRs on origami templates (Figure 6A,B). The protocol enables high yields of the assembly of AuNRs into chiral metamolecules with strong plasmonic CD responses (Figure 7).

Table 1: Temperatures and rates for the thermal annealing of DNA origami templates.

Table 2: Temperatures and holding times for the annealing of AuNRs and DNA origami templates. The cooling rate between the steps is set at 0.1 °C/min. The DNA origami-AuNR samples are annealed while shaking at 400 rpm. 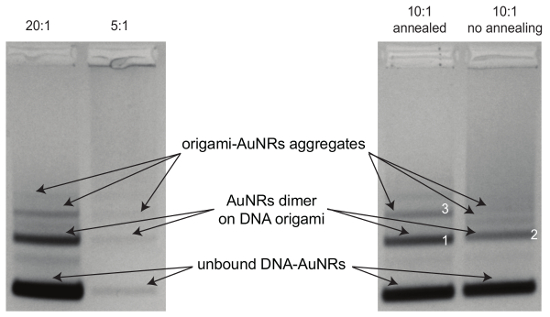 Figure 3: The agarose gel electrophoresis purification of origami-AuNRs. Gel (0.7%) was run for 3.5 h at 80 V for the samples prepared following the assembly procedure with different DNA-AuNR-to-origami ratios (20:1, 5:1) and samples (10:1 DNA-AuNRs-to-origami ratio) with/without annealing procedure. For TEM images of the samples in bands 1, 2, and 3, see Figure 6. Please click here to view a larger version of this figure. 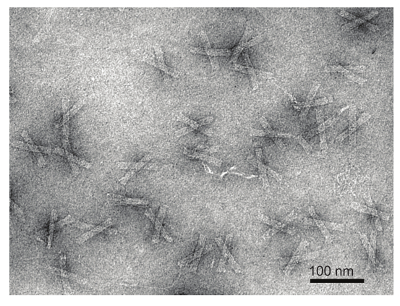 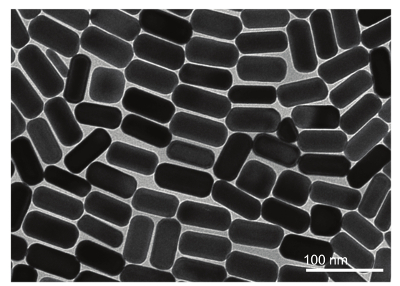 Figure 5: Representative TEM image of the AuNRs. The average dimensions of synthesized AuNRs are 70 x 30 nm. Please click here to view a larger version of this figure. 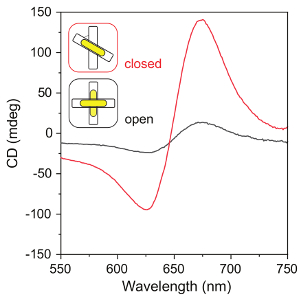 The protocol introduces the whole workflow of design, assembly, purification, and characterization of DNA origami-based chiral assemblies of AuNRs. The DNA origami templates used in the protocol are particularly suitable for the fabrication of stimuli-responsive assemblies. Various types of responses and functionalizes can be incorporated into the lock strands that define the chiral state of the origami template (Figure 1B)24,25,26,31. For static assemblies, simpler block-shaped templates are often sufficient14,45,46,47.

The DNA origami-based approach to the fabrication of plasmonic nanostructure inherits limitations of the DNA origami technique48. The size of the origami templates is typically limited by the size of the scaffold strand. The stability of DNA structures is reduced under law-salt conditions. The cost of synthetic staple strands remains rather high. However, recent developments in the field of structural DNA nanotechnology are expected to overcome these limitations49,50,51,52,53,54,55.

Compared to other molecular-based approaches for generating chiral assemblies of AuNRs34,35,36,37, DNA origami provides a high level of spatial precision and programmability.

For achieving reliable and reproducible optical responses of chiral assemblies, we strongly recommend adapting the protocols for AuNR synthesis40, since the quality and optical properties of commercial products may vary between batches. Additional annealing (step 6.2) is often crucial for ensuring the correct attachment of AuNRs to DNA origami templates (Figure 6).

Finally, the protocol described here is not limited to chiral assemblies. DNA origami provides a very flexible platform for the fabrication of complex plasmonic nanostructures9,10.

The authors thank S. Voutilainen for her assistance with CD spectrometer. The authors acknowledge the provision of facilities and technical support by Aalto University at OtaNano - Nanomicroscopy Center (Aalto-NMC). This work was supported by the Academy of Finland (grant 308992) and the European Union's Horizon 2020 research and innovation programme under the Marie Skłodowska-Curie grant agreement No. 71364. 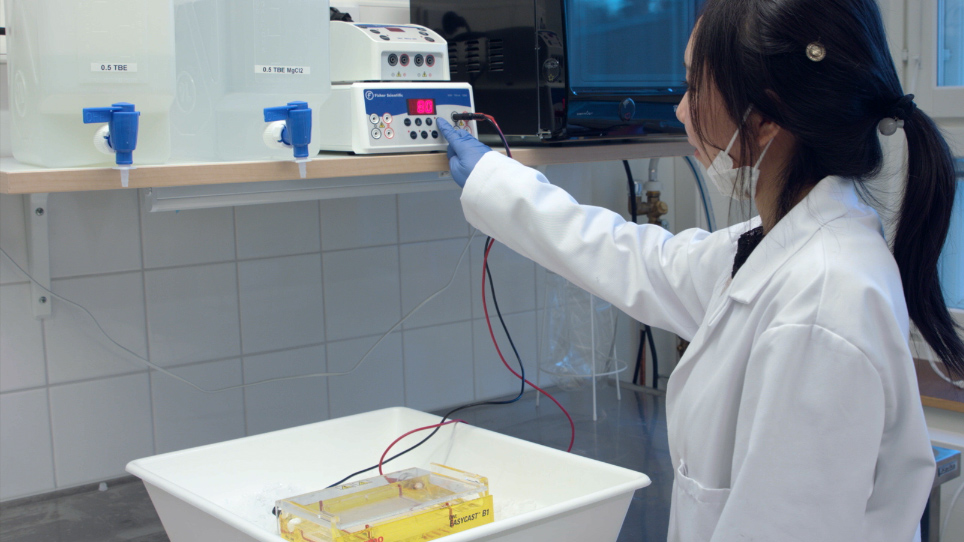