Laminin-111 (Ln1) is an essential part of the extracellular matrix in epithelia, muscle and neural systems. We have previously demonstrated that the microstructure of Ln1 alters the way that it signals to cells, possibly because Ln1 assembly into networks exposes different adhesive domains. In this protocol, we describe three methods to generate polymerized Ln1.

Unlike growth factors or cytokines, extracellular matrix (ECM) proteins can assemble into structural networks. As ECM dysfunction is a key element of many disease conditions, the mechanisms by which cells sense and transduce signals from ECM composition, microstructure and biomechanics are attractive targets for therapeutic development. Growing evidence suggests that microstructure of these networks plays a major role in how these proteins signal to cells. To date, this linkage between ECM microstructure and cell function has been shown for collagen I1, fibronectin2, and fibrin3.

Laminin-111 (Ln1) is a trimeric, cross-shaped protein that is a key structural component of the extracellular matrix that contacts epithelial cells4, muscle cells5, and neural cells6. In the mammary gland, Ln1 is necessary for functional differentiation of mammary gland epithelial cells into milk producing cells 7,8,9, and Ln1 is crucial for induction of tumor reversion10,11. Ln1 and other laminins are necessary for development of cortical actin networks and sarcolemma organization in muscle12,13, and for neural cell migration and neurite outgrowth13 . Thus, understanding the mechanisms by which laminin signals to cells is an active area of research.

Ln1 contains multiple adhesive domains for a broad range of receptors including integrins, syndecans, dystroglycan, LBP-110 and LamR (Figure 1A)4,14. The E8 fragment, which contains the c-terminus globular domains of laminin α1, is necessary for binding dystroglycan and integrins α6β1 and α3β115, and it is necessary for functional differentiation of epithelial cells15,16. In contrast, the short arms show different biological activity17, meaning that availability for recognition of these different Ln1 domain after network formation could alter cell behavior.

We have recently demonstrated that Ln1 arranged into a polymeric network exhibits fractal properties (i.e., a structure that is self-similar across multiple length scales)18. Fractal networks signal differently to epithelial cells compared to Ln1, which lacks this arrangement19. This fractal network indicates a particular assembly structure, where the long arm is preferentially exposed to cells18. As a result of this different long arm display, epithelial cells undergo functional differentiation into milk producing cells with well-organized tight junctions and suppression of actin stress fibers19.

We describe 3 methods to generate Ln1 networks from short arm-short arm binding interactions, which show a high display of the Ln1 long arm: 1) by cell-free assembly with acidic buffers, 2) by co-incubation with glycoproteins, or 3) by interaction with cell surface dystroglycan. These three methods generate similar laminin microstructures through three very different mechanisms, permitting flexibility in experimental design. Previous work suggests that these three methods could represent biological robustness: in mammary gland epithelia, either cell surface dystroglycan, glycoproteins, or artificially structured laminin can induce functional differentiation19. Thus, researchers can choose between these methods based on the study subject: dystroglycan expressing cells show no sensitivity to Ln-1 microstructure, as dystroglycan in the cell membrane induces correct polymerization into a fractal network19,20. Matrigel, a mix of laminins and glycoproteins21, represents the most economical source of Ln-1, and offers the necessary microstructure to induce dystroglycan knockout mammary cells to differentiate20, but contains a complex mixture of proteins with lot to lot variability. PolyLM represents the cleanest, most reductionist system that provides this function, but at increased cost and lower efficacy to induce mammary cell differentiation compared to Matrigel19.

These three methods have a fractal network structure characteristic of diffusion limited aggregation18,19, and show altered biological activity compared to aggregated laminin in multiple experimental systems22,23,24,25. Future studies using these methods could identify the receptors and signaling necessary for epithelial differentiation and determine to restore normal cell-matrix interactions in cells in abnormal microenvironments20, such as tumors.

Figure 1: Background of Ln1 and polymerization method: A: Ln1 is a complex trimeric protein with multiple adhesive domains (receptor binding sites noted), which can bind a variety of integrin and non-integrin receptors (in black) and form polymeric networks by short arm-short arm binding (in tan). B: Ln1 can form a hexagonal lattice in the presence of calcium ions and either low pH, glycoproteins such as nidogen-1 or cell surface dystroglycan. C: example SEM image of polymerized Ln1 showing hexagonal lattice and proposed Ln1 assembly model. Please click here to view a larger version of this figure. 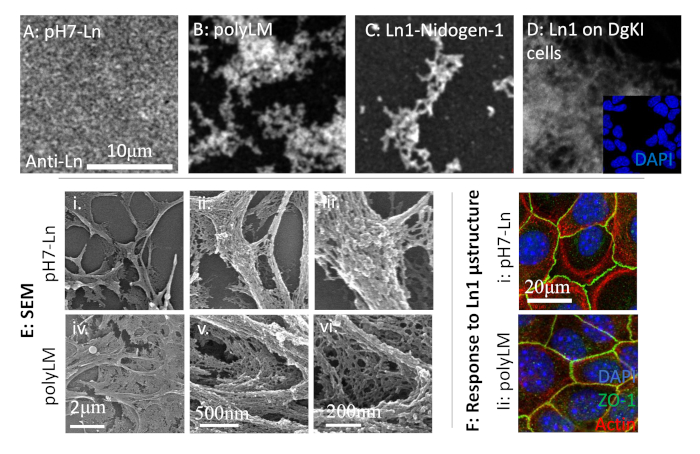 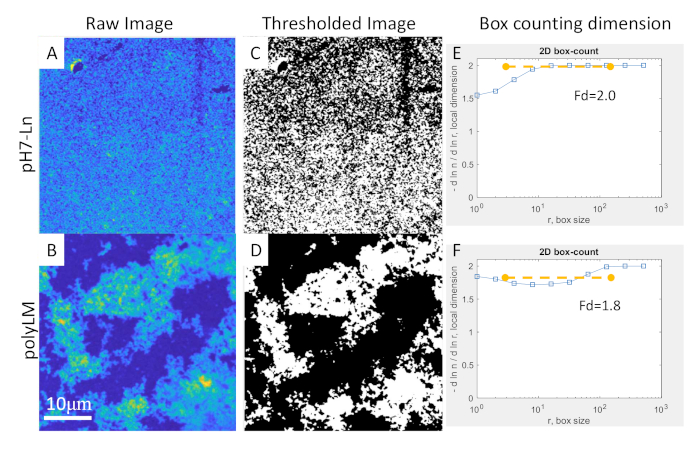 Figure 3: Fractal dimension estimation with the box counting method. A&B: Raw image of pH7-Ln and polyLM show differences in morphology. C&D: these images are thresholded to give rise to a black and white image, E&F: then the log of the ratio of the number of boxes containing the image to the size of the box is calculated. The average slope represents the box counting dimension Fd is calculated. pH7-Ln has a characteristic dimension of 2.0, indicating no fractal properties, whereas polyLM has a dimension of ~1.7, indicative of a diffusion limited aggregation process. Please click here to view a larger version of this figure.

Laminins represent a key element of the ECM in epithelial, muscular, and neural organ systems, and have been shown in vitro to play essential roles in regulating the functional differentiation of cells. Growing evidence indicates that the structure of laminin displayed to cells regulates its signaling and resultant cell phenotype15,16, thus methods to control Ln1 microstructure should be of interest to basic biologists working in these fields, and to tissue engineers seeking to recapitulate normal behavior in vitro. More generally, the microstructure of a variety of extracellular matrix proteins is known to regulate biological response and understanding the mechanisms by which microstructure modulates cell function is an active area of research.

In this work, we describe three methods to polymerize laminin into networks with fractal microstructure characteristic of diffusion limited aggregation. These Ln1 polymers have been shown to signal differently to cells compared to aggregated Ln1, potentially due to altered adhesive domain display to cells. These three methods to control Ln1 microstructure may represent biological redundancy in assembly of Ln1, but this represents a challenge for experimental work. Controlling Ln1 microstructure using acidic buffer treatment will only show effects when added to dystroglycan knockout cells19,20. Thus, experimental design must consider the cells and the purity of Ln1 to be used. Commercially available Ln1 is commonly derived from EHS matrix, which contains a high percentage of nidogens and other glycoproteins; Ln1 in EHS matrix polymerizes correctly into fractal networks in neutral buffered systems. Recombinant Ln1 has recently become available commercially but is exceptionally costly.

Ln1 protein quality is crucial for this work as short arm fragments can block polymerization. Short arm fragments (i.e., the E4 fragment) interfere with network formation as each fragment induces a void in the network29. Previous data shows that inclusion of E4 fragments can block Ln1 induced phenotypes29,30. Likewise, we have found that network formation is disrupted by small quantities of laminin-332 (unpublished data), which like E4 fragments contains a single adhesive domain29,30. Thus, it is crucial to check that Ln1 is intact, and highly purified to remove other laminin species before starting work.

While these methods are relevant to researchers studying cell-matrix interactions, it should be noted that the laminin family is highly complex, involving 15 known members and additional splice variants31, and this family interacts with a wide range of receptors, glycoproteins, collagens and potentially growth factors4. Thus, polymerized Ln1 represents a reductionist state which can be expected to be modified rapidly by cell function. Furthermore, different organ systems sense, respond to, and remodel laminins differently: we have demonstrated that linkage of laminin to actin through dystroglycan is dispensable for the mammary gland19, whereas dystroglycan is absolutely necessary for myocyte function32.

This work was performed under the auspices of the U.S. Department of Energy by Lawrence Livermore National Laboratory under Contract DE-AC52-07NA27344. IM release LLNL-JRNL-799443.

This work was funded by Lawrence Livermore National Lab LDRD 18-ERD-062 (to C.R.). Thanks to John Muschler for his kind gift of the DgKO and DgKI cells. Thank you to the staff at the University of California Berkeley Electron Microscope Laboratory for advice and assistance in electron microscopy sample preparation and data collection.