Both gas chromatography-mass spectrometry (GC-MS) and liquid chromatography-mass spectrometry (LC-MS) are widely used metabolomics approaches to detect and quantify hundreds of thousands of metabolite features. However, the application of these techniques to a large number of samples is subject to more complex interactions, particularly for genome-wide association studies (GWAS). This protocol describes an optimized metabolic workflow, which combines an efficient and fast sample preparation with the analysis of a large number of samples for legume crop species. This slightly modified extraction method was initially developed for the analysis of plant and animal tissues and is based on extraction in methyl tert-butyl ether: methanol solvent to allow the capture of polar and lipid metabolites. In addition, we provide a step-by-step guide for reducing analytical variations, which are essential for the high-throughput evaluation of metabolic variance in GWAS.

Large-scale "omics" approaches have enabled the analysis of complex biological systems1,2,3 and further understanding of the link between genotypes and the resulting phenotypes4. Metabolomics using ultra-high-performance liquid chromatography-mass spectrometry (UHPLC-MS) and GC-MS enabled the detection of a plethora of metabolite features, of which only some are annotated to a certain degree, resulting in a high proportion of unknown metabolites. Complex interactions can be explored by combining large-scale metabolomics with the underlying genotypic variation of a diverse population5. However, handling large sample sets is inherently associated with analytical variations, distorting the evaluation of metabolic variance for further downstream processes. Specifically, major issues leading to analytical variations are based on machine performance and instrumental drift over time6. The integration of batch-to-batch variation is challenging and especially problematic when analyzing large-scale structured plant populations. Multiple normalization procedures were suggested to correct for non-biological variations, e.g., the usage of internal, external, and isotope-labeled internal standards to correct for analytical errors, of which each is inherently associated with known problems and pitfalls7,8,9,10.

In addition to analytical variation, the choice of extraction protocols generally varies depending on the analytical method. Ultimately, it is desired to reduce material and labor costs as well as the necessity of using several aliquots of the same sample for various analytical processes by performing phase separation-based extraction methods. These methods were first introduced using chloroform: methanol/water solvents to fractionate polar and hydrophobic compounds11.

This protocol describes a fast high-throughput pipeline for a multi-omics platform to profile both polar metabolites and lipids in legume species. Further, it shows how those datasets can be appropriately corrected for analytical variation and normalized before integrating genotypic information to detect metabolite quantitative trait loci (QTL) by performing GWAS.

NOTE: The analysis of derivatized metabolites is based on a previously described protocol17. Handle all derivatization reagents in the fume hood. Ensure that N-methyl-N-(trimethylsilyl)trifluoracetamide (MSTFA) does not get in contact with water and humidity.

Successful metabolomics GWAS experiments should begin with a proper experimental design, followed by sample collection, extraction, data acquisition, and processing, as illustrated in Figure 1. In this protocol, the MTBE method15 was used to extract and analyze hundreds of metabolites belonging to several compound classes. Chromatography depends highly on the properties of the utilized column as well as elution buffer mixtures. Figure 2 shows chromatograms of QC samples, indicating the elution pattern of some major lipid classes in this analytical system. The applied gradients for each platform are given in Table 1. Strong emphasis was placed on handling systemic errors in large-scale experiments. Performing large-scale metabolomics is inherently associated with systemic errors. For demonstration, we analyzed lipidomic data across several common bean species. Supplemental Table 1 provides the extracted raw lipidomic data obtained after chromatogram processing using the software indicated in the Table of Materials. Following this protocol enabled us to circumvent major issues in dealing with omics data, especially while handling large sample sets. The normalization procedure yields in accurate correction of batch-wise analytical errors, as demonstrated in Figure 3. Although increasing the numbers of QC samples would increase the power of the normalization, this is not always feasible due to cost and time constraints. For high-throughput metabolomics GWAS with non-targeted metabolic features, it is essential to illustrate higher numbers of trait-marker association appropriately. A pleiotropic map38 combining multiple GWAS results could be used to highlight the genomic regions to which several traits are linked (Figure 4). 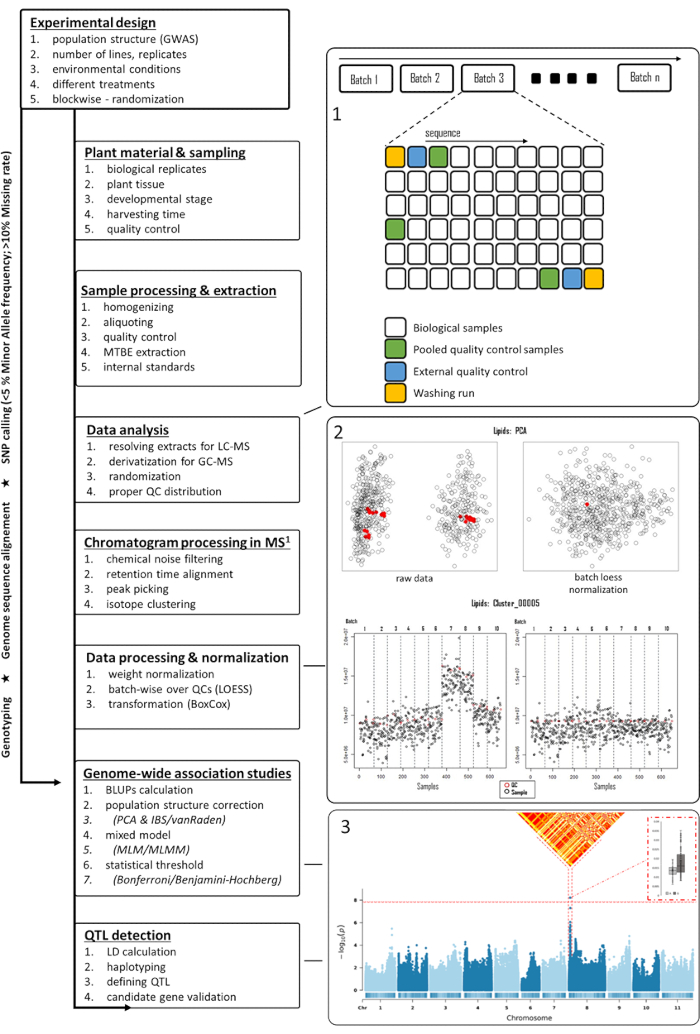 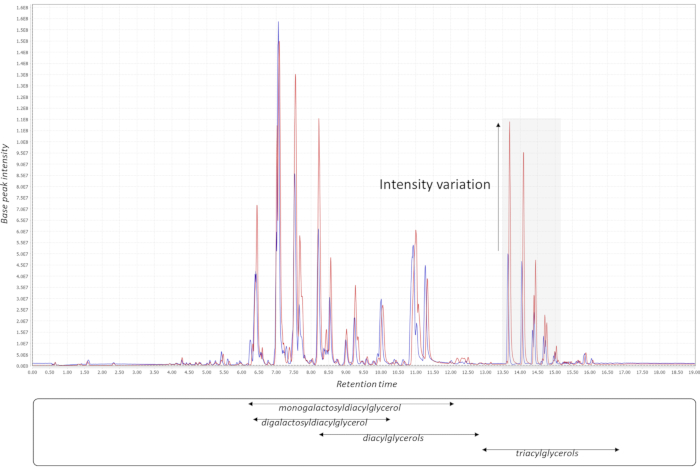 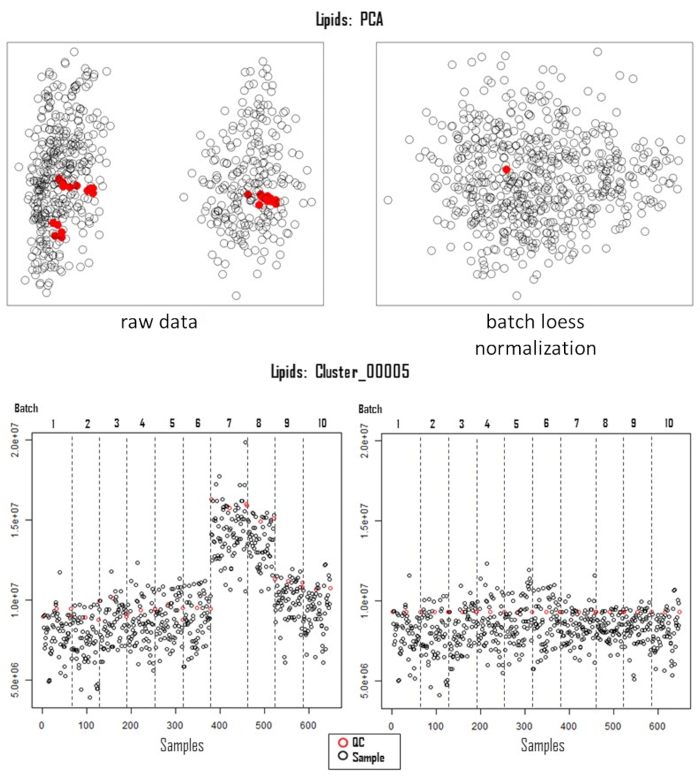 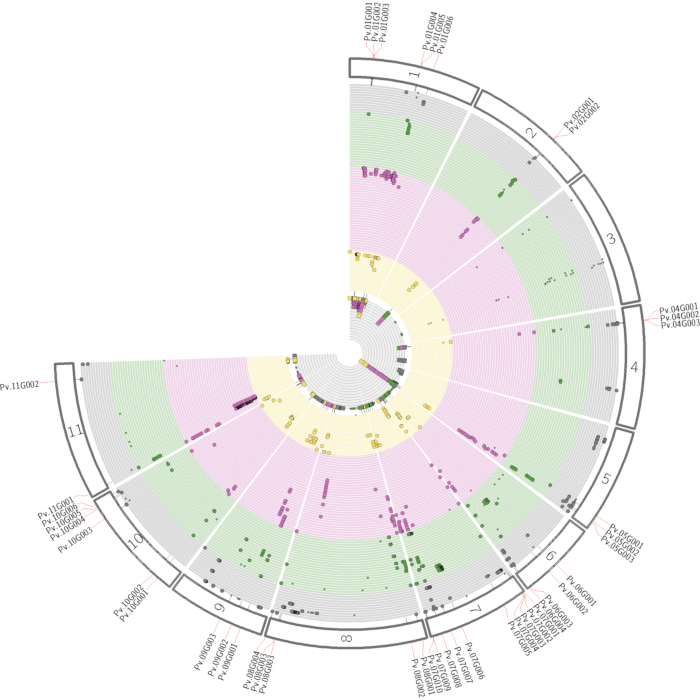 Supplemental Table 1: Raw lipidomics data. Indicates the peak intensities for each of the detected clusters over each sample. Please click here to download this Table.

Both GC-MS and LC-MS are widely used tools for profiling complex mixtures of various metabolite classes. Handling large datasets with these tools is inherently associated with a non-biological variation, e.g., analytical variation, which interferes and biases the interpretation of the results. This protocol presents a robust and high-throughput extraction pipeline for comprehensive metabolic profiling to eliminate variation of non-biological origin and conduct large-scale "omics" studies. The volumes and concentrations used in this protocol were adjusted for legume species in different tissues. However, these parameters can be slightly modified and used for large-scale metabolic samples from other plant species as well.

This protocol discusses several crucial steps that might lead to potential variation while handling a large number of samples, e.g., during harvesting12,13, extraction14, as well as randomization46. Furthermore, there are additional issues that have not been discussed in this protocol that must be considered to ensure high-quality metabolomic data, e.g., matrix effect and ion suppression14.

The power of QC-based normalization methods inherently depends on the number of QC samples in each batch. As mentioned earlier, although increasing the number would increase the power, the intra-batch variation of the QCs is relatively marginal compared to inter-batch variation in these analytical systems, as illustrated in Figure 3. Overall, there are other QC-based normalization methods, such as systemic error removal using random forest (SERRF), which have been shown to outperform most of the other normalization methods such as batch-wise-ratio, normalization using an optimal selection of multiple internal standards (NOMIS), and probabilistic quotient normalization (PQN)47. However, SERRF relies on multiple QC samples in each batch, e.g., every tenth sample, which is not feasible while handling large numbers of samples. The main advantage of QC-based normalization over other data-driven or internal standard-based methods is that it retains the essential biological variation while accommodating unwanted technical variation28. Readers may refer to this review on the handling of variation28.

One main issue in GWAS is the rate of false positives, which originate mostly due to the linkage of causal and non-causal sites48,49. Second, the conservative statistical correction approaches, e.g., Bonferroni and FDR, correct for the number of independent tests, which is not equal to the number of assayed SNPs in GWAS due to the linkage between proximate SNPs50,51 Therefore, the actual number of independent tests is often lower. Another way to reduce the conservative statistical threshold would be to reduce the number of tested SNPs used for GWAS based on linkage decay over defined genomic regions52. The GWAS-integrated high-throughput metabolomics platform described in this protocol has a wide range of applications. In particular, it will facilitate improvements in crop breeding by changing the metabolite/lipid composition for industrially and nutritionally desired levels. Overall, metabolomics has provided an in-depth insight into the genetic architecture of a plethora of metabolites and metabolic diversification that occurred during crop domestication over the last decades, indicating the vast potential of metabolomics-associated breeding53. The molecular biological approaches for downstream QTL validation include the generation of CRISPR/Cas9 mutant lines54, T-DNA insertion lines55, stable and/or transient overexpression lines56, VIGS, ex vivo metabolomics approaches57 next to the conventional approach in generating cross F2 populations as well as cross validation in different populations.

The authors have no conflicts of interest to declare.

M.B. is supported by the IMPRS-PMPG 'Primary Metabolism and Plant Growth'. A.R.F. and S.A. acknowledge the financial support of the EU Horizon 2020 Research and Innovation Programme, project PlantaSYST (SGA-CSA No. 739582 under FPA No. 664620), and project INCREASE (GA 862862).