Amyloid-β (Aβ) causes memory impairments in Alzheimer's disease (AD). Although therapeutics have been shown to reduce Aβ levels in the brains of AD patients, these do not improve memory functions. Since Aβ aggregates in the brain before the appearance of memory impairments, targeting Aβ may be inefficient for treating AD patients who already exhibit memory deficits. Therefore, downstream signaling due to Aβ deposition should be blocked before AD development. Aβ induces axonal degeneration, leading to the disruption of neuronal networks and memory impairments. Although there are many studies on the mechanisms of Aβ toxicity, the source of Aβ toxicity remains unknown. To help identify the source, we propose a novel protocol that uses microscopy, gene transfection, and live cell imaging to investigate early changes caused by Aβ in axonal growth cones of cultured neurons. This protocol revealed that Aβ induced clathrin-mediated endocytosis in axonal growth cones followed by growth cone collapse, demonstrating that inhibition of endocytosis prevents Aβ toxicity. This protocol will be useful in studying the early effects of Aβ and may lead to more efficient and preventative AD treatment.

Amyloid-β (Aβ) deposits are found in the brain of patients with Alzheimer's disease (AD) and are considered a critical cause of AD1 that disrupt neuronal networks, leading to memory impairments2,3,4. Many clinical drug candidates have been shown to effectively prevent amyloid-β (Aβ) production or remove Aβ deposits. However, none have succeeded in improving memory function in AD patients5. Aβ is already deposited in the brain prior to the onset of memory impairments6; therefore, decreasing Aβ levels in the brains of patients exhibiting memory impairments may be ineffective. Aβ deposition is present in preclinical AD patients; however, these patients rarely present with neuronal degeneration and memory deficits6. There is a time lag between Aβ deposition and memory impairments. Therefore, a critical strategy for the prevention of AD is blocking Aβ toxicity signaling during the early stages of AD, prior to the development of memory deficits. Aβ deposition induces axon degeneration7,8,9,10,11,12,13, which may lead to a disruption of neural networks and permanent impairment of memory function. Many studies have investigated the mechanisms of Aβ toxicity; for example, the degenerated axons of AD mice brains have been shown to have increased autophagy14. Calcineurin activation has been reported as a possible mechanism of Aβ-induced axonal degeneration15; however, the direct trigger of axonal degeneration remains unknown.

This study focuses on the collapse of axonal endings called growth cones. The collapse of axonal growth cones can be caused by axonal growth repellents, such as semaphorin-3A and ephrin-A516,17,18,19,20. Collapse-like dystrophic axonal endings have been observed in the brains of AD patients21,22. Additionally, a failure of growth cone functioning can provoke axonal degeneration23. However, it is unknown whether Aβ induces growth cone collapse. Therefore, this study presents a novel protocol to observe the early effects of Aβ in cultured neurons and investigate Aβ-induced growth cone collapse.

In this protocol, Aβ1-42 was incubated at 37 °C for 7 days before use, because incubation of Aβ1-42 was needed for producing toxic forms27,28,30,35. After this incubation, aggregated forms of Aβ were observed (Figure 1A). It has been reported that similar incubation of Aβ1-42 produced the fibril form of Aβ36. After treatment with this aggregated Aβ1-42, immunostaining with an antibody for the toxic oligomer of Aβ35,37 was performed, and positive staining was detected on cultured neurons (Figure 1B). Considering the above, this incubation protocol produces the toxic forms of Aβ.

Several days were required for the induction of axonal degeneration after Aβ exposure. The events prior to axonal degeneration remain unclear. Therefore, this protocol has been developed to further understand the mechanisms involved. Using this protocol, the early phenomena induced by Aβ treatment were analyzed. Cortical neurons were cultured for 4 days. The longest neurites in the cultured neurons were identified as axons; these were confirmed by positive immunostaining for the axonal marker, tau-1, and negative immunostaining for the dendritic marker, MAP2 (Figure 2). After 1 h of vehicle treatment, growth cones had spread lamellipodia and processed several filopodia. These were identified as healthy growth cones. Conversely, 1 h of Aβ1-42 treatment led to shrunken growth cones, which developed no lamellipodia or filopodia. These were identified as collapsed growth cones. Collapse scores were calculated as described in step 1.3.7. When shapes of growth cones were unclear, they were eliminated from the analysis. Aβ1-42 treatment led to a significant increase in collapse score, corresponding to increased axonal growth collapse, when compared to the collapse score of vehicle-treated growth cones27.

Axonal growth cones were observed before and after treatment with Aβ1-42 (Figure 3). Cells were maintained in the inverted microscope with a humidified atmosphere of 10% CO2 at 37 °C. Images were captured every 5 min. As shown in Figure 3, growth cones collapsed between 21 and 26 min after Aβ1-42 treatment. Growth cones were excluded from live cell imaging if they did not retain their healthy shape for 1 h prior to any treatment. 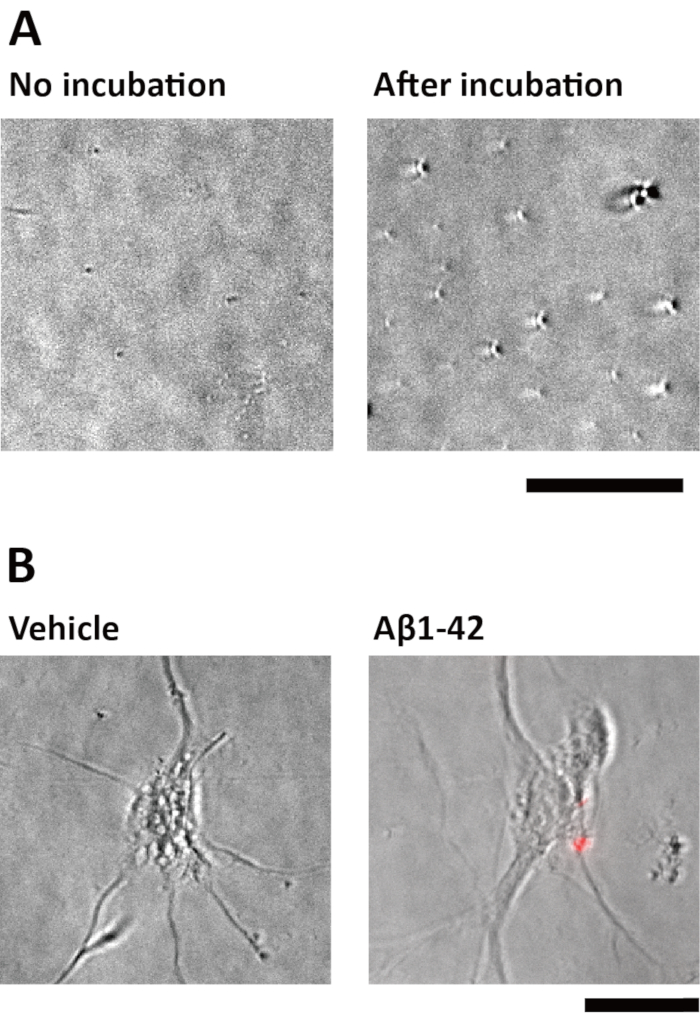 Figure 1: Incubation of Aβ1-42 aggregates Aβ. (A) Aβ1-42 was dissolved in distilled water at a concentration of 0.5 mM and incubated at 37 °C for 7 days (after incubation), or stored at -30 °C without incubation (no incubation). Each Aβ solution was diluted to 0.1 mM; then, 10 μL of each diluted solution was dropped on glass slides and covered with coverslips. Bright-field images with oblique illumination were captured by using inverted microscope B. Scale bar = 20 μm. (B) Aggregated Aβ1-42 or vehicle treatment on cultured neurons for 4 h. Following treatment, the neurons were fixed and immunostained for toxic Aβ oligomers. Fluorescence images (red) and bright-field images with oblique illumination (gray) are shown. Scale bar = 20 μm. Please click here to view a larger version of this figure. 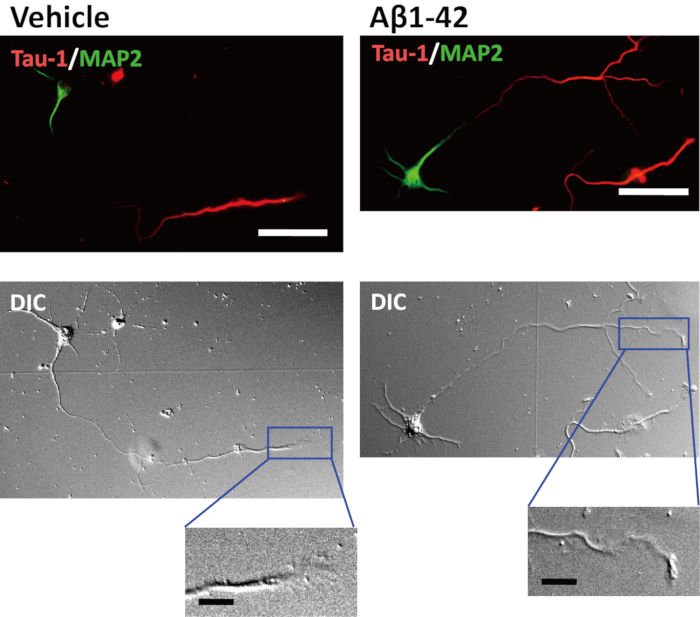 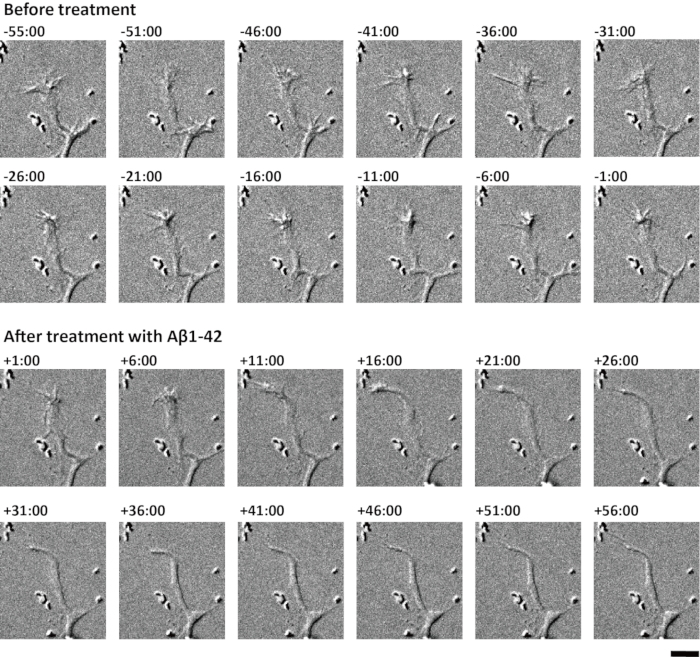 Figure 3: Live cell imaging before and after Aβ1-42 treatment. After 4 days of culture, cells were transferred to an inverted microscope and DIC images were captured every 5 min. Time-lapse images are shown. The digits represent minutes:seconds after the application of aggregated Aβ1-42 (final concentration, 0.5 μM). Scale bar = 10 μm. Please click here to view a larger version of this figure. 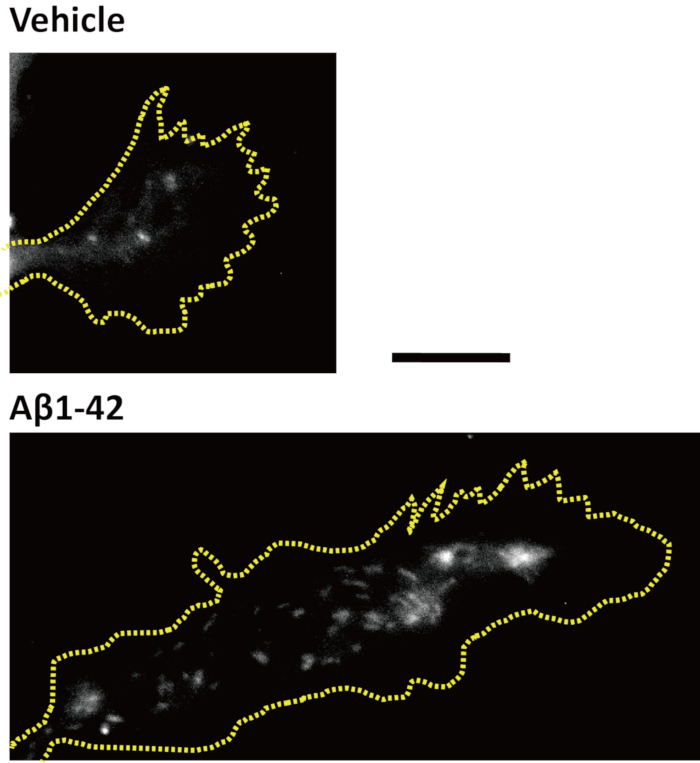 Figure 4: Twenty minutes of Aβ1-42 treatment induced endocytosis. Cortical neurons were cultured for 4 days and treated with a fluorescence membrane probe. Then, neurons were treated for 20 min with Aβ1-42 or vehicle. Fluorescence images of the growth cones are shown. The yellow dotted lines represent the outlines of the growth cones. Scale bar = 10 μm. Please click here to view a larger version of this figure. 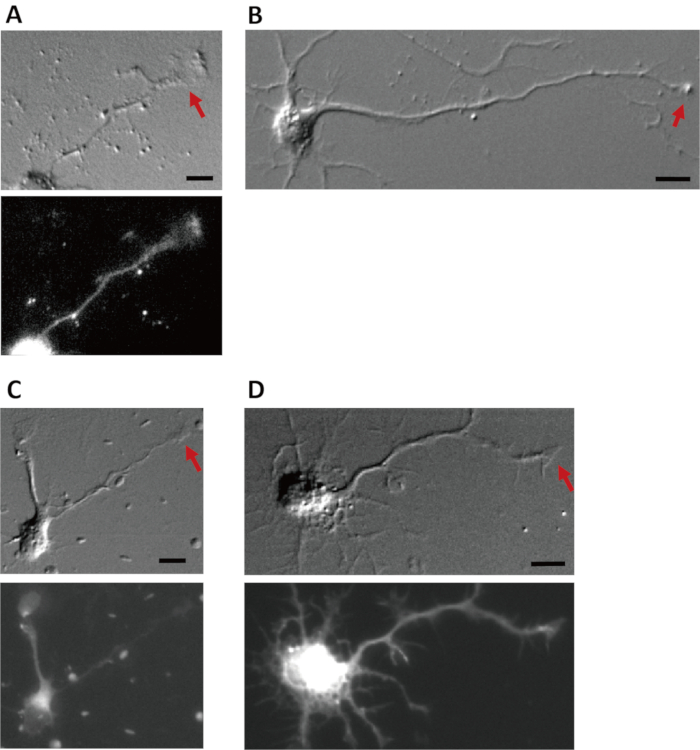 This protocol was developed from collapse assays for axonal growth repellents, such as semaphorin 3A and ephrin-A516,17,18,19,20. Collapse assays have been used in studies assessing the development of neuronal networks. I have shown that this protocol can be applied to pathological analyses, particularly those involving mechanisms of AD; however, a limitation may be that approximately 40% of growth cones collapsed in the healthy condition. This percentage is higher than results from cultured dorsal root ganglion neurons, which are more commonly used in collapse assays16,17,18,19,20. Therefore, the difference in cell types might be linked to differences in collapse ratios. The collapse ratios found in this study were consistent with those found in previous studies with normal cultured cortical neurons40,41. Furthermore, Aβ1-42 induced similar levels of growth cone collapse when compared with other collapse factors, such as semaphorin 3A and ephrin-A527. Therefore, this protocol is valid for the quantification of Aβ1-42-induced growth cone collapse. This fixation protocol is important to maintain the shape of growth cones. If the cells were conventionally fixed with 4% paraformaldehyde at room temperature, more growth cones may have collapsed due to the fixation procedure (data not shown). Alternatively, glutaraldehyde and fixation buffers are available for rigid fixation, as previously described42; however, glutaraldehyde exhibits autofluorescence, which is a significant impediment for fluorescence imaging.

A recent study with the same protocol showed that the water extract from Radix Polygalae (roots of Polygala tenuifolia) inhibited Aβ1-42-induced endocytosis in cultured neurons, prevented axonal degeneration, and reduced memory deficits in a transgenic mouse model of AD31. A novel candidate for AD prevention has been found with this protocol. A combination of gene transfection and live cell imaging in this protocol might show the other cellular events found in axons and their terminals before and after Aβ treatment, such as Ca2+ imaging, microtubule dynamics, and cell adhesion dynamics, which are reportedly related to axonal growth43,44,45. This protocol may help reveal more detailed mechanisms of Aβ toxicity and may help lead to the prevention and/or treatment of AD.