A protocol for the space payload design, the space experiment on thermocapillary convection, and analyses of experimental data and images are presented in this paper.

Under microgravity conditions in space, many interesting physical phenomena are presented due to the absence of gravity. In a liquid with a free surface, there exists a new flow system (i.e. thermocapillary flow) that is caused by the temperature gradient or concentration gradient. Different from traditional convection on the ground, thermocapillary convection is a ubiquitous phenomenon in space environments. As it is a very important research subject in microgravity fluid physics, a number of experiments have been carried out in space as well as on the ground. Recently, space experimental studies were performed on thermocapillary convection on the SJ-10 recoverable scientific experiment satellite. The space experiment payload consisted of eight systems, namely a fluid experiment system, liquid storage and injection system, temperature control system, thermocouple measurement system, infrared thermal camera, displacement sensors, CCD image acquisition system, and electrical control system, as shown in Figure 1 (left). The space experiment payload for research on surface waves of thermocapillary convection is shown in Figure 1 (right). This study focused on the instability of flow, oscillation phenomena, and transitions, which are important characteristics in the transition process from laminar flow to chaos. Studies on these fundamental subjects have great significance for research regarding strong nonlinear flow.

Over the past 30 years, microgravity science has undergone prolific development in China14,15,16, and a number of microgravity experiments have been conducted in space17,18. In the field of fluid physics, the first microgravity experiment was the study of two-layer fluid on the SJ-5 recoverable satellite in 1999, and the flow structure was obtained by the particle tracing method14. In 2004, the study on thermocapillary migration of a droplet was carried out on the SZ-4, and the relationship between migration velocity and critical Mach (Ma) number was obtained15,16. In 2005, the experimental study on multi-bubble thermocapillary migration was carried out on the JB-417, and the migration rules were obtained as the Ma number was increased to 8,000. Meanwhile, problems such as bubble merging were also studied. In 2006, the study on diffusion mass transfer was carried out on the SJ-8 recoverable satellite, the Mach-Zehnder interferometer was first applied in the space experiment, the process of diffusion mass transfer was observed, and the diffusion coefficient was evaluated18.

In order to observe the convective pattern transition, temperature oscillation, and liquid-free surface deformation, six thermocouples, an infrared thermal camera, and a displacement sensor to quantify the frequency, amplitude, and other physical quantities of the oscillation were used. Through investigations on oscillation and transition in thermocapillary convection in space, the mechanism of thermocapillary convection in the microgravity environment, which provides scientific guidance for the growth of materials in space, can be discovered and understood. Furthermore, technological breakthroughs in such space experiments, such as the techniques of liquid surface maintenance and liquid injection without bubbles, will further enhance the simplicity and technical level of microgravity experiments in fluid physics.

1. Design and preparation of the experimental system

2. Establishment of the temperature control system

3. Establishment of the measurement system

NOTE: All devices can be controlled by software.

The accurate volume ratio was defined, and the liquid surface topography was reconstructed based on the images captured by the CCD. The critical instability condition was determined, and the oscillation characteristics were studied through analyses on single point temperature signals and displacement oscillating signals. The structure of the flow field was obtained, and the transition of the flow pattern was determined through the change of the infrared image with time. The flow characteristics, flow mechanism, and bifurcation transition can also be studied by means of comprehensive analysis on multiple experimental results.

Infrared thermal images have been obtained to visualize the temperature distributions on the liquid-free surface in thermocapillary convection. A variety of oscillatory flow patterns have been observed, which include radial oscillation or clockwise/counterclockwise circumferential rotations (Figure 8). Thermocapillary flow first loses its stability and transitions to radial oscillation, and then to circumferentially rotating waves. It has been found that steady thermocapillary convection evolves to a standing wave, then a traveling wave, and finally to the coupling state of traveling wave and standing wave.

Figure 1: Space experimental payload. (Left) Schematic of the payload. (Right) Image of the space experiment payload. The thermocapillary convection can be observed by means of the infrared camera, CCD, and displacement sensor. Please click here to view a larger version of this figure.

Figure 3: Vacuum filling device and the filling process. This procedure carried out before launch ensured that no bubbles were generated in the liquid during the space experiments. Please click here to view a larger version of this figure.

Figure 4: Schematic of the connection between the stepper motor and cylinder. The silicone oil discharge from or suction to the cylinder can be realized by controlling the push/pull switch of the stepper motor. Please click here to view a larger version of this figure. 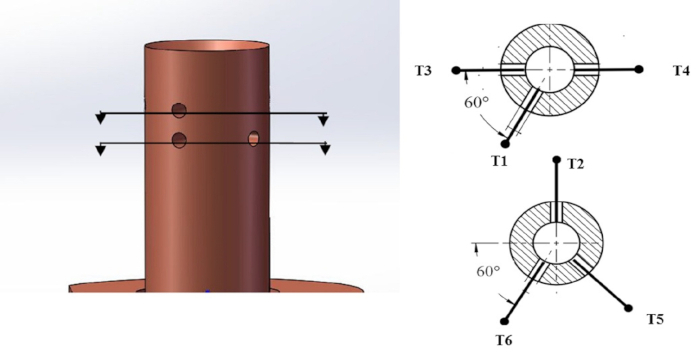 Figure 5: The installation locations of thermocouples. Temperature signals at different heights and azimuthal angles can analyze the traveling wave characteristics. Please click here to view a larger version of this figure. 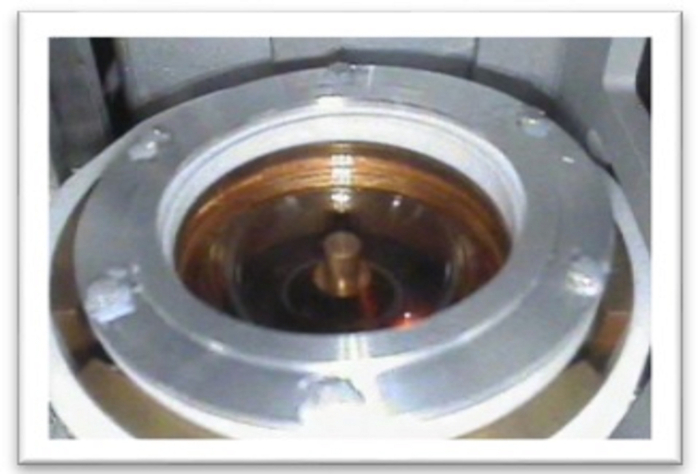 Figure 6: CCD image of the annular liquid pool (Case 13, Vr = 0.715). Whether the liquid level climbs or not can be identified by the image. The volume ratio can also be obtained by edge processing of the image. Please click here to view a larger version of this figure. 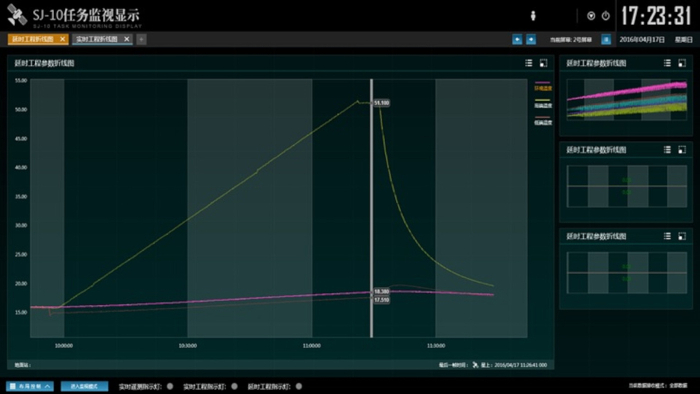 Figure 7: Real-time temperature control curve (Case 13, Vr = 0.715). This is a linear heating mode with a rate of 0.5 °C/min. Please click here to view a larger version of this figure. 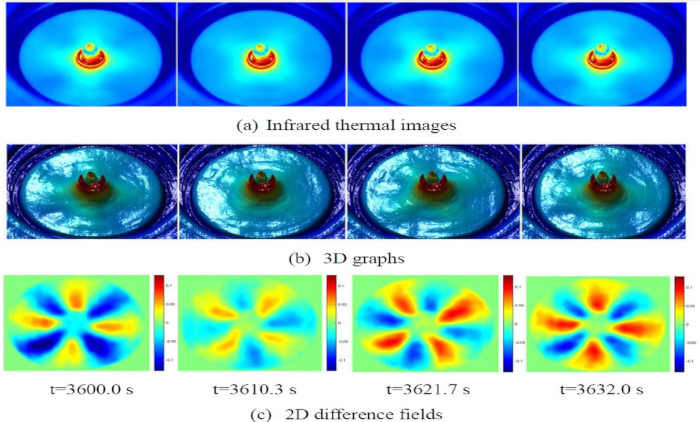 Figure 8: Temperature field on the free surface in one period (Case 13, Vr = 0.715). (A) Infrared thermal images of the hydrothermo wave. (B) Corresponding 3D graphs of (A). (C) Corresponding periodic subaverage images of original images in (A). The cold zone and the hot zone appear alternately in pairs. Red = high temperature; blue = low temperature. Please click here to view a larger version of this figure.

Due to the limitation of space resources, the volume of the equipment as a whole is only 400 mm × 352 mm × 322 mm, with a weight of only 22.9 ± 0.2 kg. This is very inconvenient when selecting and laying out experimental devices, and the establishment of the flow system becomes the critical step. Therefore, the increasing temperature difference is set at two ends of the liquid pool so that the fluid can generate a series of flow phenomena. In order to observe the entire process of the convection from steady to oscillation in a single experiment, 2cSt silicone oil is chosen as the working liquid because of its transparency and appropriate physical parameters. In addition, because of the surface tension, the liquid surface is curved. The observation point of the displacement sensor should be at the center of the inner and outer diameters.

Only 23 groups of valuable space experimental data have been obtained due to the limited flight time of the satellite, and experiments at a large temperature difference (above 40 °C) have yet to be carried out. In addition, due to the limitation of space resources, the model lacks rotation function compared with the real industrial crystal growth method.

In terms of equipment development, two key problems have been solved, namely the maintenance of the liquid-free surface and the liquid injection without bubbles, both of which play key roles in the successful implementation of space experiments. These two key technologies have also been successfully applied to subsequent space experiments, such as in the Tiangong-2 space mission, and will also be applied to additional space experiments in the future.

The experimental device and observation method based on SJ10 thermocapillary convection can provide a scientific basis and technical support for the study of fluid mechanics, microgravity physics, real industrial crystal growth, and possibly many other numerous applications.

There are many participants who have contributed to the work reported in this paper, including all the members of our project team, as well as some people from the Astronauts research and training center (ACC) and Neusoft.

This work is funded by the Strategic Priority Research Program on Space Science, Chinese Academy of Sciences: SJ-10 Recoverable Scientific Experiment Satellite (Grant No. XDA04020405 and XDA04020202-05), and by the joint fund of National Natural Science Foundation of China (U1738116).