Disorders of the respiratory system with a chief complaint of shortness of breath are among the most common reasons for both outpatient and inpatient evaluation. The most obvious visible clue to a respiratory problem will be whether the patient is displaying any signs of respiratory distress, such as fast respiratory rate and/or cyanosis. In a clinical situation, this will always require emergent attention and oxygen therapy.

Unlike pathology in other body systems, many pulmonary disorders, including chronic obstructive pulmonary disease (COPD), asthma, and pneumonia, can be diagnosed by careful clinical examination alone. This starts with a comprehensive inspection and palpation. Keep in mind that in non-emergency situations the patient's complete history will have been taken already, gaining important insight into exposure histories (e.g., smoking), which could give rise to specific lung diseases. This history can then confirm physical findings as the examination is performed. 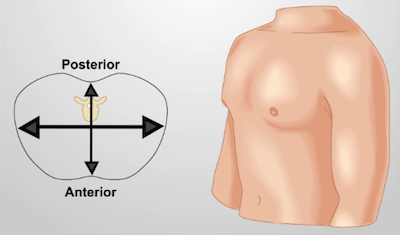 Figure 1. Thorax of a normal adult. A transverse section of a thorax (left); a torso (right). The anteroposterior chest diameter is smaller than lateral diameter. 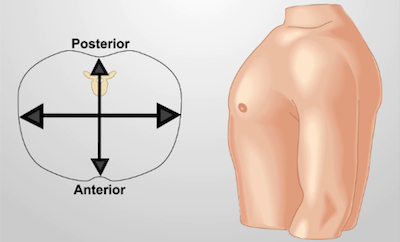 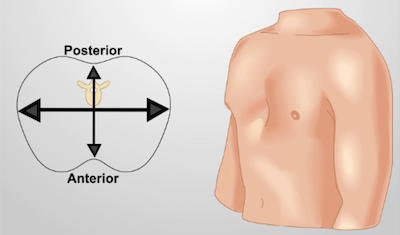 Figure 3. Pectus Excavatum (funnel chest). A transverse section of thorax (left); a torso (right) with signs of pectus excavatum (depression of the lower portion of sternum) 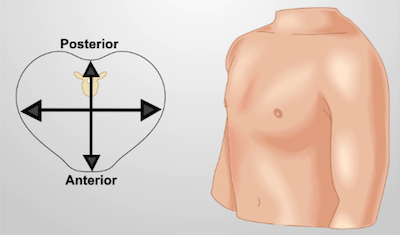 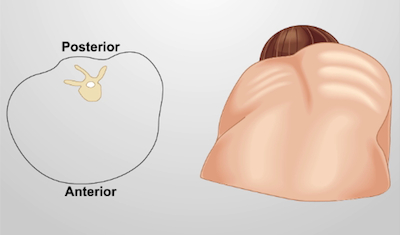 Disorders of the respiratory system with a chief complaint of shortness of breath are among the most common reasons for both outpatient and inpatient evaluation.

The air we breathe in travels through our trachea into our lungs through the bronchi. Inside the lungs, it passes through the bronchioles to ultimately enter the specialized air sacs called alveoli. The alveoli are surrounded by blood capillaries, which allow diffusion of inhaled oxygen into our blood stream and facilitate excretion of carbon dioxide; thus maintaining our system's homeostasis.

Dysfunctioning of lungs, which occurs in diseases like asthma, emphysema or chronic obstructive pulmonary disorder, commonly known as COPD, can be diagnosed with the help of a simple respiratory exam. This assessment involves inspection, palpation, percussion and auscultation. This presentation will focus on the inspection and palpation aspect only; the rest will be covered in another video of this collection.

First, let's briefly review what to look for during inspection and palpation of the respiratory system. Unlike pathology in other body systems, many pulmonary disorders can be diagnosed by careful inspection alone. For example, simply by checking the respiration rate, one can diagnose respiratory distress. Similarly, observing the muscles used in respiration can also provide some insight. Normal or quiet breathing is accomplished just by the use of diaphragm and external intercostal muscles, while forced expiration involves the internal intercostal and abdominal muscles. Other than these primary muscles, there are accessory muscles for inspiration, such as scalene, sternocleidomastoid, pectoralis minor and trapezius. A constant use of these muscles, which can be observed during inspection, indicates difficulty in breathing.

Another parameter that can be inspected is the chest's anteroposterior diameter, which is normally smaller than its lateral diameter. Therefore, a "barrel" chest, which is indicated by bulging chest with an abnormal increase in anteroposterior diameter, is indicative of conditions such as COPD and emphysema. Some chest deformities like pectus excavatum signified by sunken or caved-in chest, or pectus carinatum, which refers to a protruding or "pigeon" chest, are due to congenital defects. By inspection, one can also detect kyphoscoliosis, which is an outward and lateral curvature of the spine; this can severely impair respiration.

Coming to palpation, palpating the lateral borders of the trachea via the sternal notch helps in determining if the trachea is in normal, midline position or not, as a deviated trachea can indicate lung pathology. Other major areas of palpation include all of the head, neck and axillary lymph nodes. Lymphadenopathy, which is abnormal number or size of lymph nodes, can indicate a respiratory tract infection.

Taken together, careful inspection and palpation can provide great deal of information regarding the physiology and pathophysiology of a patient's respiratory system.

After reviewing what to look for during a respiratory exam, let's walk through the detailed steps of general observations and inspection. Before every examination, wash your hands thoroughly with soap and warm water. Enter the room, where the patient is already seated. Introduce yourself and briefly explain the exam you are going to perform. Make sure that the patient is undressed down to their waist. Females should keep their underwear on and expose one hemithorax at a time as requested. Position the patient on the examination table at a 30-45° angle and approach them from their right side.

First, note the signs of obvious respiratory distress. These include: hoarse voice, fast respiratory rate, unusual posturing to maximize air entry like tripoding, breathing using accessory muscles, inward movement of intercostal muscles, coughing with sputum, wheezing, and cyanosis. Next, ask the patient to stretch out their arms and extend the wrists. Inspect for the presence of tremor and also note if nicotine staining of nails is present. Ask the patient to put their two thumbnails side by side. Note if a diamond-shape is formed on the inside. If clubbing is present, this doesn't happen, and it can be a sign of pulmonary fibrosis, cystic fibrosis, or bronchogenic carcinoma.

Examine the skin on the anterior tibial surface for erythema nodosum, which is inflammation of the skin, or panniculitis that typically causes painful red nodular areas. Inspect the patient's face for obvious facial flushing, and for the signs of Horner's syndrome, which includes the triad of miosis, ptosis, and hemifacial anhidrosis-that is decreased sweating on one side of the face. Ask the patient to tilt their head upwards and look into each nostril with the help of a flashlight. This is to inspect for nasal polyps or evidence of epistaxis. Next, instruct the patient to open their mouth and stick out their tongue. The color of the tongue should be noted-pink or red represent normal, while bluish discoloration suggests central cyanosis. Then, ask the patient to phonate by saying, "Ahhhhh", and using a tongue depressor, inspect the throat for pharyngitis or tonsillar inflammation.

Now, let's review the palpation steps of the respiratory physical exam. Start with palpating the radial pulse. A bounding or abnormally strong pulse can be a sign of carbon dioxide retention. Next, assess for lymphadenopathy in the cervical region. Palpate the nodes with on both sides simultaneously. Start at the preauricular glands followed by jugulodigastric, submandibular, submental, anterior cervical, supraclavicular, posterior cervical, posterior auricular, and occipital lymph nodes. Assess for axillary lymphadenopathy by holding the patient's arm near the elbow with one hand and palpating in the axilla with your other hand. Next, feel the trachea by placing the right index finger in the sternal notch. Palpate the lateral borders of the windpipe to determine if it is in the normal, midline position.

Following that, palpate the chest wall by using the palm of your hand to assess for any obvious point tenderness, masses, or rib deformities. Perform the palpation at four to five different levels anteriorly and posteriorly, and any differences between the right and left sides can indicate abnormal underlying lung tissue. Next, assess chest expansion, place your hands just below the level of the nipples, with thumbs touching in the midline and fingers extended to make contact with the lateral edges. Ask the patient to take a deep breath. The thumbs should separate by approximately 5 cm or more in normal chest expansion. This technique can be also utilized posteriorly.

Lastly, to assess tactile vocal fremitus, place the hypothenar sides of your hands at the lower anterior part of the chest. Then ask the patient to say "99" every time you change the position. The vibration felt against your hand should be the same for each position on both sides. Same test can be performed on the posterior surface.

You've just watched JoVE's video on inspection and palpation during a respiratory exam. Severe pulmonary illnesses will sometimes be apparent from simply glancing at the patient. Gaining important clues related to smoking and other exposure history could further aid in the diagnosis of specific lung disease. In addition, careful inspection and palpation can help detect disorders that are not apparent and therefore one should take the time to go through this entire process on every patient with a respiratory complaint. As always, thanks for watching!

Look first and foremost for any signs of respiratory distress in a patient and unique breathing pattern. Severe underlying pulmonary illnesses will often be apparent from simply glancing at patients. Conditions such as COPD and emphysema can reveal themselves in a patient's appearance and body habitus. These patients can loosely be classified as either "pink puffers" or "blue bloaters." "Pink puffers" are usually thin and have emphysema. They have a hyper-inflated chest, usually have a fast respiratory rate in order to maintain their oxygen saturations, and are mildly hypoxemic. "Blue boaters" are obese and more severely hypoxic, relying on hypoxia for their respiratory drive. They typically have COPD and carbon dioxide retention with signs of heart failure.

Remember that crucial diagnostic clues will be provided by simply listening during the process of inspection and palpation (without using a stethoscope). For instance, if a patient sounds hoarse, congested, wheezy, or is coughing, this can give insight into the diagnosis in many cases. Palpation will then confirm what has already been found through careful visual inspection. Lymphadenopathy can indicate a respiratory tract infection, and decreased chest expansion is a sign of chronic underlying lung disease. Take the time to go through this entire process on every patient during your examination. 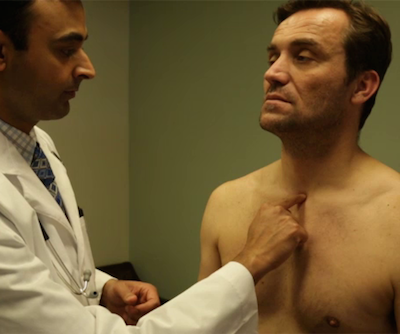