Soil comprises the thin layer at the earth’s surface, containing biotic and abiotic factors that contribute to life. The abiotic portion includes inorganic particles ranging in size and shape that determine the soil’s texture. The biotic portion incorporates plant residues, roots, organic matter, and microorganisms. Soil microbe abundance and diversity is expansive, as one gram of soil contains 107-8 bacteria, 106-8 actinomycetes, 105-6 fungi, 103 yeast, 104-6 protozoa, 103-4 algae, and 53 nematodes. Together, the biotic and abiotic factors form architectures around plant roots, known as the rhizosphere, that provide favorable conditions for soil microorganisms.

Biotic and abiotic factors promote life in soils. However, they also contribute stressful dynamics that limit microbes. Biotic stress involves competition amongst life to adapt and survive in environmental conditions. For example, microbes can secrete inhibitory or toxic substances to harm neighboring microorganisms. Penicillium notatum is a notorious fungus, as it reduces competition for nutrients by producing an antimicrobial, which humans harvest to create the pharmaceutical penicillin. Abiotic stresses arise from physical or chemical properties limiting microbial survival, such as light, moisture, temperature, pH, nutrients, and texture.

Directly observing the interrelationships between soil organisms, particles, and behaviors within varying soil environments is difficult, but the contact slide assay, also known as the buried-slide technique, developed by Rossi et al. (1936) provides a snapshot viewpoint into soil microbiology. This method is useful for observing soil fungi, actinomycetes, and bacteria via microscopy. Although, it is not intended for microbial quantifications, as it only implies one small portion of a larger heterogeneous environment.

This method is easily performed by burying a glass slide into soil for several days, then fixing the microorganisms on the slide with acetic acid. The microbes are stained with Rose Bengal dye and observed via microscopy using oil immersion on the 100X objective. Three microbial groups can be distinguished, as bacteria appear as small rounded shapes, actinomycetes filaments as thin strings, and fungal hyphae as thick threads. In soil, almost all bacteria are smaller and rounder than those in pure culture due to nutritional stress, which causes shrinking and rounding for a more favorable surface: volume ratio. The irregular dark shapes not stained are soil particles. Different nutrient amendments can be added to the soil to provide carbon and glucose sources that promote microbial growth and interactions. This technique allows for easy observation of soil microbiology and helps to identify several organisms present in the environment. 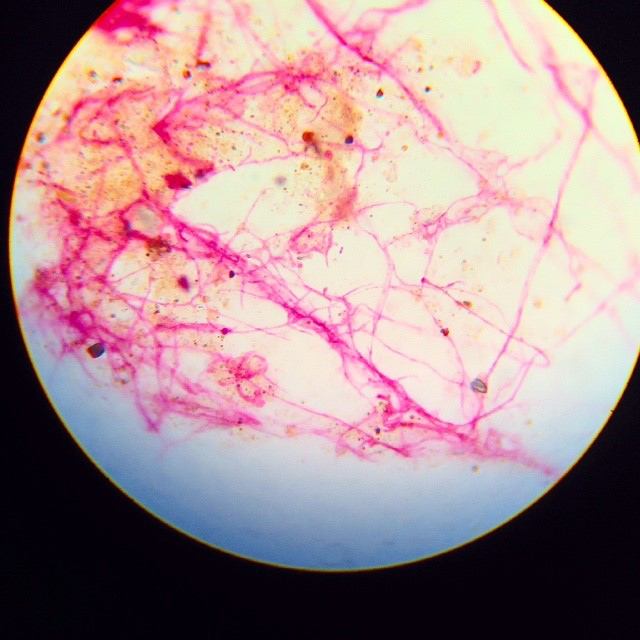 Figure 1. A slide under a microscope.

The relationships between the various organisms and inorganic components in soil are vital to understanding soil changes and environmental stresses, but cannot be elucidated without direct visualization.

Soil, an extremely complex system, is a habitat for millions of diverse organisms. The region of soil directly around plant roots in particular, called the rhizosphere, contains a unique array of organisms that are directly influenced by the plant roots.

The abiotic, or non-biological, component of the rhizosphere includes inorganic particles ranging in size and shape that contribute to the soil's texture. The biotic, or biological, portion includes plant residues, roots, organic matter, and microorganisms.

This video will demonstrate the direct visualization of the biotic and abiotic components of rhizosphere soil, in order to understand factors affecting soil changes and to predict environmental stresses.

Microscopic organisms tend to reside in the water located within soil pores. Bacteria are among the simplest and most plentiful organisms present in soil, and are found in many morphologies including spheres called cocci, rods called bacilli, and filamentous forms.

Fungal species, such as yeast and molds, are the second most abundant organisms in soil. They work to decompose and recycle dead organic matter. Microscopic filamentous fungi visually differ from other microorganisms, as they possess long and branched hyphae that release spores.

Direct observation of the relationships between these organisms is challenging, but can be achieved using a contact slide assay. This method is performed by submerging a glass slide into soil for several days and allowing the organisms and soil particles to adsorb to the slide surface.

The slide is then removed at an angle to prevent smearing of the surface. The microbes are fixed with acetic acid, and stained with Rose Bengal stain to enable visualization via light microscopy.

Now that you understand the principles behind the contact slide assay technique, lets take a look at the process in the laboratory.

First, collect surface garden soil and transfer the soil into the lab. Weigh 150 g of soil into the 2 separate containers. One container should be labeled as the treatment sample, which will be modified with nutrients to encourage rapid proliferation of organisms. Label the other as the control, which will be unchanged.

Calculate the water content in the soil, using the technique shown in this collection’s Determination of Moisture Content in Soil video. Based on this calculation, determine the amount of water in the soil on a dry weight basis. Now calculate the amount of water that needs to be added to give a 15% soil moisture content. This brings the moisture to field capacity, optimal for microorganism growth.

Next, label 4 clean microscope slides: two as treatment, and two as control. Insert the two treatment slides into the treatment soil container. Leave a section of each slide exposed above the soil surface, and ensure that there is a gap between the two slides.

Insert the two control slides into the control soil container in the same way. Cover the cups with plastic wrap, and secure with a rubber band. Puncture the plastic wrap several times to allow air transfer, but still prevent excessive evaporation.

Finally, weigh both cups, record their weight, and incubate them in a designated area at room temperature for seven days.

After the seven-day incubation, calculate the soil moisture content by weighing the soil cups. Determine if weight has been lost due to water evaporation, and replace the water if needed.

Remove the plastic wrap from the container, and remove the two slides from the soil by pressing each slide to an inclined position, and withdrawing so that the upper face of the slide is undisturbed.

Gently tap the slides to remove large soil particles. Using a damp paper towel, clean the lower face of the slides. Allow them to dry at room temperature in a fume hood. Once dry, pick up a slide with forceps, and immerse it into acetic acid for 1 to 3 min.

Rinse the top of the slide with a gentle stream of distilled water to remove excess acid. Repeat these steps for all slides. Allow the slides to air dry.

Support the slide on a staining rack over a container to catch excess dye. Using a dropper, gently cover the surface of each slide with phenolic Rose Bengal dye. Allow the slides to stain for 5 to 10 min, taking care to add more dye as needed to keep the slides wet. Gently rinse the slides with water to remove excess stain, and allow the slides to dry at room temperature.

Examine the slides on a light microscope, using an oil immersion objective. The treated soil will have more soil microbes.

Bacteria are found as small cocci or rod shapes, typically in clumps, on soil particles or lining fungal hyphae.

The direct isolation of organisms from soil is important to the understanding of soil and environment characteristics.

Entomopathogenic nematodes are microscopic round worms that parasitize insects. While they are not visualized in the contact slide assay, they can be isolated from collected soil samples, as shown in this example.

Filamentous fungi are vital to soil health due to their role in nutrient recycling. The isolation and observation of filamentous fungi from soil was conducted in this example.

Soil microorganisms naturally break down components in soil, such as dead plants and organisms. Biodegradation and colonization of biodegradable plastic films was examined, as shown in this example.

Fungi were isolated from plastic films buried in soil for several months. The fungi were then tested individually for growth on plastic films. Plastic films were then incubated with the selected fungal strain with no growth media, in order to observe direct degradation of the plastic by the fungi. 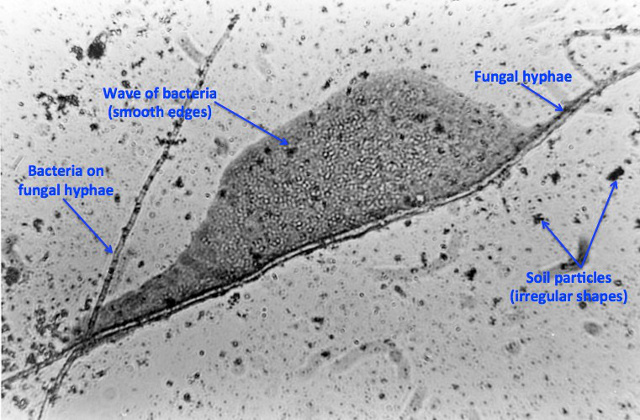 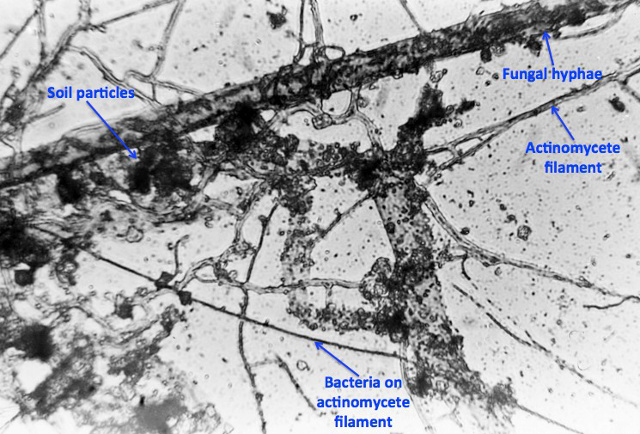 The contact slide assay, also referred to as the buried-slide, is a simple technique utilized to qualitatively observe soil biota. This assay qualitatively shows the spatial interactions between fungal hyphae, actinomycete filaments, bacteria, and soil particles. Individuals or industry can employ this assay to gather knowledge on a particular soil’s health in regards to agriculture, gardening, composting, teaching, and studying. However, this technique does not quantify soil micro biota, as it only encompasses a small portrait of a larger heterogeneous environment.

Soil organism relationships can be observed by performing the contact slide assay and viewing the results through 100X oil immersion microscopy (Figures 2 and 3). The simplicity and ease to performing this assay makes it a great starting technique for those who have never been exposed to microbiology and may be viewing microorganisms through a microscope for the first time. 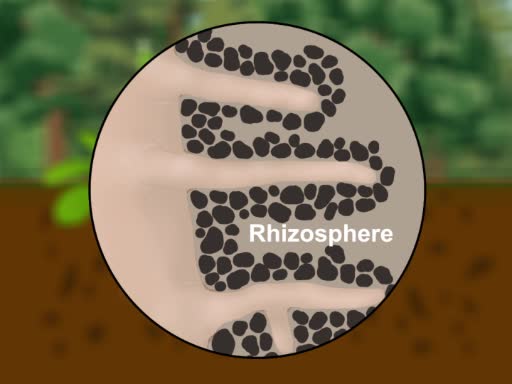