The accompanying video describes the use of the GELFREE 8100 Fractionation System, which partitions complex protein samples on the basis of molecular weight and recovers the fractions in liquid phase. The video describes how the technology works, how it is used, and provides resultant data, with polyacrylamide gel electrophoresis analysis of fractionated bovine liver homogenate.

The GELFREE 8100 Fractionation System is a novel protein fractionation system designed to maximize protein recovery during molecular weight based fractionation. The system is comprised of single-use, 8-sample capacity cartridges and a benchtop GELFREE Fractionation Instrument. During separation, a constant voltage is applied between the anode and cathode reservoirs, and each protein mixture is electrophoretically driven from a loading chamber into a specially designed gel column gel. Proteins are concentrated into a tight band in a stacking gel, and separated based on their respective electrophoretic mobilities in a resolving gel. As proteins elute from the column, they are trapped and concentrated in liquid phase in the collection chamber, free of the gel. The instrument is then paused at specific time intervals, and fractions are collected using a pipette. This process is repeated until all desired fractions have been collected. If fewer than 8 samples are run on a cartridge, any unused chambers can be used in subsequent separations.

This novel technology facilitates the quick and simple separation of up to 8 complex protein mixtures simultaneously, and offers several advantages when compared to previously available fractionation methods. This system is capable of fractionating up to 1mg of total protein per channel, for a total of 8mg per cartridge. Intact proteins over a broad mass range are separated on the basis of molecular weight, retaining important physiochemical properties of the analyte. The liquid phase entrapment provides for high recovery while eliminating the need for band or spot cutting, making the fractionation process highly reproducible1.

*The total amount of protein to be separated will depend on the complexity of the sample. For more complex samples, such as tissue homogenate, 150-200 μg per channel is recommended.

A 200 μg of bovine liver homogenate was partitioned into 12 fractions each, using the GELFREE Fractionation System. 6 μL of each fraction was run on a standard 1D SDS PAGE gel and silver stained. As shown in Figure 1, the protein sample was fractionated into 12 distinct fractions, spanning the molecular weight range from 3.5kDa to 150kDa. A molecular weight standard (ColorBurst, Sigma) are also shown in lanes 1 and 14. The gel shown here highlights the high-recovery rate achieved using the GELFREE 8100 system for protein fractionation. The gel shown here represents 4% of the protein recovered from 200 μg. 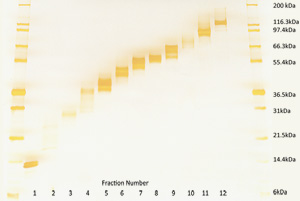 Figure 1. Proteins from bovine liver homogenate separated using the GELFREE Fractionation system. 6 μL of each 150 μL fraction was loaded and run on a 1D SDS PAGE gel and silver stained. A molecular weight (MW) standard was also loaded as indicated. Please click here to see a larger version of figure 1.

The GELFREE 8100 Fractionation System provides a quick, simple and reproducible method for partitioning complex protein samples into discrete molecular weight-based fractions. This novel method of fractionation eliminates the need for band or spot cutting, making it possible to isolate proteins over a broad mass range in 90 minutes. The ability to load relatively large amounts of sample and recover fractions in liquid phase is particularly useful in the isolation and analysis of low-abundance proteins, which are typically more difficult to detect. The resulting fractions can then be used in a wide array of applications, such as LC-MS, MALDI-TOF, and immunoblotting.

The authors of this article are employed by Protein Discovery that produces reagents and instruments used in this article. 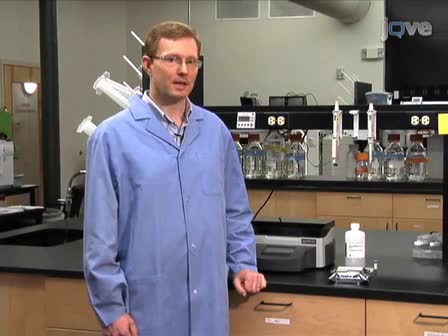