Functional transcranial Doppler sonography (fTCD) is a simple and non-invasive ultrasound technique which can be used to assess the lateralization of cognitive functions, especially language, and is suitable for use with children.

Here we will describe the use of functional transcranial Doppler ultrasound (fTCD) as a cost-effective, non-invasive and reliable method for assessing cerebral lateralization. The procedure involves measuring blood flow in the middle cerebral artery via an ultrasound probe placed just in front of the ear. Our work builds on work by Rune Aaslid, who co-introduced TCD in 1982, and Stefan Knecht, Michael Deppe and their colleagues at the University of Münster, who pioneered the use of simultaneous measurements of left- and right middle cerebral artery blood flow, and devised a method of correcting for heart beat activity. This made it possible to see a clear increase in left-sided blood flow during language generation, with lateralization agreeing well with that obtained using other methods3.

The middle cerebral artery has a very wide vascular territory (see Figure 1) and the method does not provide useful information about localization within a hemisphere. Our experience suggests it is particularly sensitive to tasks that involve explicit or implicit speech production. The 'gold standard' task is a word generation task (e.g. think of as many words as you can that begin with the letter 'B') 4, but this is not suitable for young children and others with limited literacy skills. Compared with other brain imaging methods, fTCD is relatively unaffected by movement artefacts from speaking, and so we are able to get a reliable result from tasks that involve describing pictures aloud5,6. Accordingly, we have developed a child-friendly task that involves looking at video-clips that tell a story, and then describing what was seen. 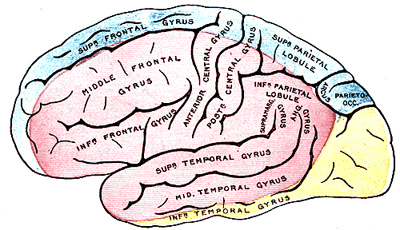 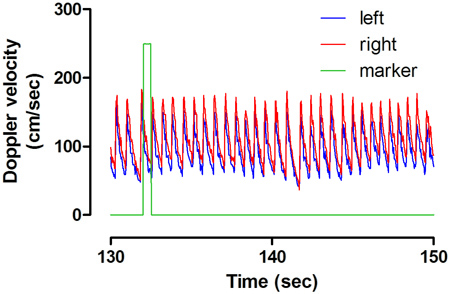 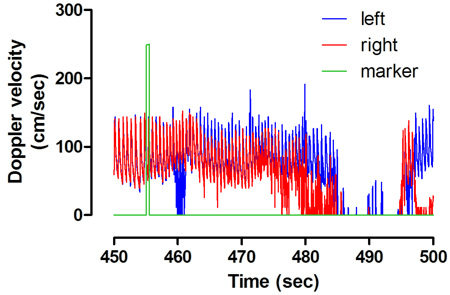 Figure 4. Disrupted data recording of raw Doppler velocity (cm/sec) for the Left (blue) and Right (red) Doppler channels from 400 to 450 seconds during a single experimental session. Event marker indicating stimulus onset displayed in green. Significant evidence of dropout is visible for both channels. 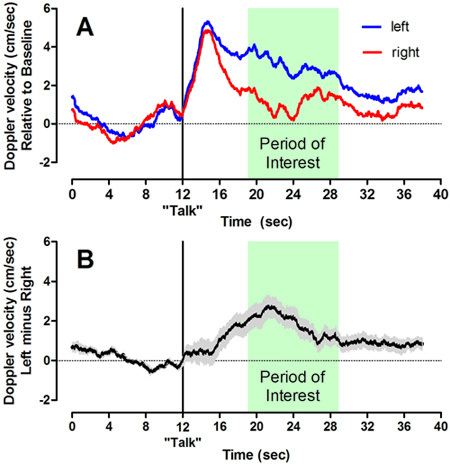 Figure 5. Left (blue) and right (red) channel (Panel A) and left minus right difference (Panel B) Doppler Velocity (cm/sec) averaged across all acceptable trials for a group of participants. Participants were cued to "Talk" at 12 seconds and the period of interest for the laterality calculation is also depicted in green. The grey error bars surrounding the difference velocity in Panel B represent the standard error of the mean.

Avi examples: the video sequences to tell the "Freezefoot" story can be downloaded from: http://psyweb.psy.ox.ac.uk/oscci/Miscellaneous.htm

As well as studying normal development, we have been using fTCD to study language lateralization in adults and children with developmental disorders of language and literacy 8, 9. We are also interested in developing methods of using fTCD for assessment of lateralization of visuo-spatial abilities10, 11.

We thank Hubertus Lohmann for sharing his expertise in fTCD techniques. This work was funded by Wellcome Trust programme grant no. 082498/Z/07/2. 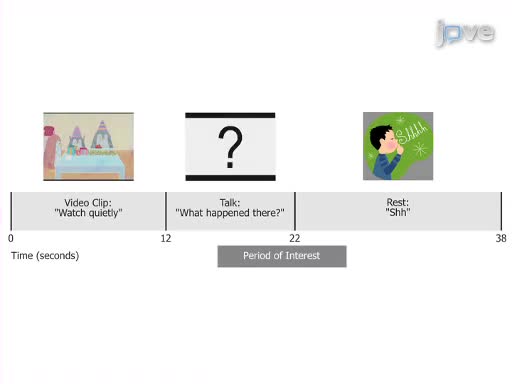