Objective assessments of the physiological mechanisms that support speech are needed to monitor disease onset and progression in persons with ALS and to quantify treatment effects in clinical trials. In this video, we present a comprehensive, instrumentation-based protocol for quantifying speech motor performance in clinical populations.

Improved methods for assessing bulbar impairment are necessary for expediting diagnosis of bulbar dysfunction in ALS, for predicting disease progression across speech subsystems, and for addressing the critical need for sensitive outcome measures for ongoing experimental treatment trials. To address this need, we are obtaining longitudinal profiles of bulbar impairment in 100 individuals based on a comprehensive instrumentation-based assessment that yield objective measures. Using instrumental approaches to quantify speech-related behaviors is very important in a field that has primarily relied on subjective, auditory-perceptual forms of speech assessment1. Our assessment protocol measures performance across all of the speech subsystems, which include respiratory, phonatory (laryngeal), resonatory (velopharyngeal), and articulatory. The articulatory subsystem is divided into the facial components (jaw and lip), and the tongue. Prior research has suggested that each speech subsystem responds differently to neurological diseases such as ALS. The current protocol is designed to test the performance of each speech subsystem as independently from other subsystems as possible. The speech subsystems are evaluated in the context of more global changes to speech performance. These speech system level variables include speaking rate and intelligibility of speech.

The protocol requires specialized instrumentation, and commercial and custom software. The respiratory, phonatory, and resonatory subsystems are evaluated using pressure-flow (aerodynamic) and acoustic methods. The articulatory subsystem is assessed using 3D motion tracking techniques. The objective measures that are used to quantify bulbar impairment have been well established in the speech literature and show sensitivity to changes in bulbar function with disease progression. The result of the assessment is a comprehensive, across-subsystem performance profile for each participant. The profile, when compared to the same measures obtained from healthy controls, is used for diagnostic purposes. Currently, we are testing the sensitivity and specificity of these measures for diagnosis of ALS and for predicting the rate of disease progression. In the long term, the more refined endophenotype of bulbar ALS derived from this work is expected to strengthen future efforts to identify the genetic loci of ALS and improve diagnostic and treatment specificity of the disease as a whole. The objective assessment that is demonstrated in this video may be used to assess a broad range of speech motor impairments, including those related to stroke, traumatic brain injury, multiple sclerosis, and Parkinson disease.

The respiratory subsystem is evaluated using the Phonatory Aerodynamic System (PAS). The system allows for simultaneous recordings of oral pressure, airflow, and speech acoustics (see Table 1 for the list of equipment and manufacturers). A disposable face mask and a disposable pressure-sensing tube are necessary for recordings. Prior to recording, the flow and pressure channels are calibrated according to the manufacturer's specifications.

The resonatory subsystem is evaluated using Nasometer. This device consists of a headset with a baffle plate, which is positioned under the nose and separates the oral and nasal cavities. Two microphones that detect the oral and nasal acoustic signals are attached to opposite sides of the plate.

Facial (lip and jaw) movements are registered in 3D using a high resolution, optical motion capture system10. The infrared digital video cameras capture the positions of 15 reflective markers that are attached to each participant's head and face at specific anatomical landmarks. An acoustic speech signal is recorded simultaneously with speech kinematics.

Tongue tracking is accomplished using an electromagnetic tracking device (WAVE), which records the position and rotation of sensors that are attached to the tongue. Unlike the optical motion tracking that is used to record external, facial structures, the electromagnetic technology provides a way to accurately track tongue movements during speech11.The system uses a combination of 5 and 6-degree-of-freedom (5DOF and 6DOF) sensors to record articulatory motions in a calibrated volume (30 x 30 x 30 cm). Movement data and acoustic data are acquired simultaneously.

In addition to the subsystem-level variables, speech intelligibility and speaking rate are measured. These measures are essential because they are current clinical "goal standards" characterizing bulbar speech performance. They provide an indication of the functional status of the speech production system as a whole and quantify the severity of speech impairment. These measures are obtained using the Sentence Intelligibility Test (SIT)12.

Table 2: Measurements obtained for each subsystem and task

Bamboo walls are getting to be very popular. They are strong, easy to use, and good looking. They provide a good background and create the mood in Japanese gardens. Bamboo is a grass, and is one of the most rapidly growing grasses in the world. Many varieties of bamboo are grown in Asia, although it is also grown in America. Last year we bought a new home and have been working on the flower gardens. In a few more days, we will be done with the bamboo wall in one of our gardens. We have really enjoyed the project.

Here we demonstrated a comprehensive protocol for the assessment of bulbar (speech) dysfunction in ALS. The data obtained from this protocol are used to gain a deeper understanding of how ALS affects speech production. These data are also used to identify the most sensitive measures of disease progression. Although this protocol is currently being employed for research, the findings from this research will be utilized to develop more cost-efficient and clinically feasible approaches to quantify bulbar involvement.

This work has been supported by the National Institute of Health, National Institute on Deafness and Other Communication Disorders, Grant R01DCO09890-02, Canadian Foundation for Innovation (CFI-LOF #15704), and Connaught Foundation, University of Toronto. The authors would like to thank Cynthia Didion, Mili Kuruvilla, Krista Rudy, and Lori Synhorst for assistance with data collection and analysis; and Cara Ullman for creating video clips.

Animations were made by Blue Tree Publishing (http://www.bluetreepublishing.com/)

The SPA and SMASH software is Matlab based and can be obtained by contacting Jordan Green at jgreen4@unl.edu. 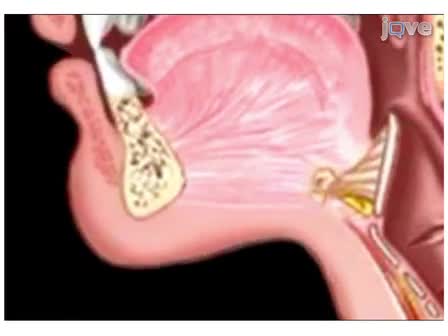