This protocol provides instructions on how to use a self-contained underwater velocimetry apparatus (SCUVA), which is designed for quantification of in situ animal-generated flows. In addition, this protocol addresses challenges posed by field conditions, and includes operator motion, predicting position of animals, and orientation of SCUVA.

The ability to directly measure velocity fields in a fluid environment is necessary to provide empirical data for studies in fields as diverse as oceanography, ecology, biology, and fluid mechanics. Field measurements introduce practical challenges such as environmental conditions, animal availability, and the need for field-compatible measurement techniques. To avoid these challenges, scientists typically use controlled laboratory environments to study animal-fluid interactions. However, it is reasonable to question whether one can extrapolate natural behavior (i.e., that which occurs in the field) from laboratory measurements. Therefore, in situ quantitative flow measurements are needed to accurately describe animal swimming in their natural environment.

We designed a self-contained, portable device that operates independent of any connection to the surface, and can provide quantitative measurements of the flow field surrounding an animal. This apparatus, a self-contained underwater velocimetry apparatus (SCUVA), can be operated by a single scuba diver in depths up to 40 m. Due to the added complexity inherent of field conditions, additional considerations and preparation are required when compared to laboratory measurements. These considerations include, but are not limited to, operator motion, predicting position of swimming targets, available natural suspended particulate, and orientation of SCUVA relative to the flow of interest. The following protocol is intended to address these common field challenges and to maximize measurement success.

When the protocol is done correctly, the particle images surrounding the target will be sharp and easy to distinguish. Using the particle fields captured in situ by SCUVA’s video camera (Figure 1A) and a DPIV processing software package, velocity fields of flow surrounding the target (Figure 1B) will be revealed. Vectors in the velocity field indicate magnitude and direction of the local flow velocity. If sufficient video is collected to provide a time series of images, a time series of velocity fields can also be determined.

Figure 2 In situ particle fields surrounding Mastigias sp. and Solmissus sp. (A and B, respectively). Red arrow in A indicates a region of high reflectivity, which results in saturation of the image, making it difficult to distinguish between particles and the target. Red arrow in B indicates a region of streaking that results when the flow rate is not sampled at a high enough frequency.

A potential constraint in the field is the need for particles in the flow, which are necessary to implement digital particle image velocimetry (DPIV). In coastal water, suspended particulate matter exhibits sizes on the order of 10 μm in diameter and concentrations between 0.002 and 10 per mm3.4 Additional studies using a submersible holocamera for particle detection confirm sufficient presence of seeding particles to perform DPIV in ocean water.5 During open sea and coastal ocean diving, we have found that particle densities and sizes are not a constraint for conducting in situ DPIV.

Aside from particle densities and sizes, another concern relevant to DPIV measurements is the homogeneity of particle concentrations.

Several different issues should be considered when preparing and conducting in situ experiments using the protocol. While recording, the operator is instructed to remain stationary and refrain from all out-of-plane and rotational motion. This request is simple in theory but difficult in practice, and these measurements require advanced diving skill to be completed successfully. Out-of plane and rotational motions of the operator result in erroneous DPIV data. However, in-plane motions can be corrected by using in-house software.6 It is recommended to the operator to practice buoyancy control for several dives before using SCUVA to maximize measurement efficiency.

Besides buoyancy considerations, the operator should be aware of the target flow direction. Flows that travel out-of-plane relative to the laser sheet will not yield reliable DPIV results, and the operator should orient SCUVA to capture these flows most effectively. In addition, the position of the diver relative to the target must be selected so as to minimize diver-induced flow in the measurements. Diver-induced flow introduces error to the target flow, and measurements that include diver effects should not be used for further analysis.

In the event that the target has a highly reflective surface, the fluid region surrounding the target will be strongly illuminated, making it difficult to distinguish nearby individual particles from surrounding fluid (region indicated by red arrow, Figure 2A). Filters or polarizers can be added to the laser or camera housings to reduce the intensity of the laser light captured by the video camera sensor. If this is not possible due to logistical constraints and limited access to equipment, post-processing of images using in-house software can provide sufficient correction by subtracting from the images the elevated pixel intensities near the target. Another consideration that affects the quality of DPIV data is whether particle streaks are present. If particle fields have regions of streaking (indicated by red arrow, Figure 2B), the video camera is recording at a frame rate too low to resolve these high velocities. By increasing the frame rate, particle streaking can be reduced. However, this results in a reduction of light reaching the video camera sensor and makes the particle field look dimmer. If the video camera has the ability to manually set aperture settings, increase the aperture setting to prevent dimming of the particle field. Determining the optimal device settings may require multiple dives with SCUVA before successful data collection. 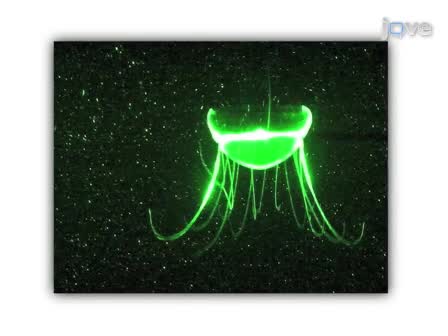