The use of domestic and miniature pigs in science has increased significantly in recent years. By demonstrating how to perform intubation, transurethral bladder catheterization, femoral artery and vein catheterization, as well as transcardial perfusion, we aim to further increase the value of Göttingen minipigs in biomedical research.

The emergence of the Göttingen minipig in research of topics such as neuroscience, toxicology, diabetes, obesity, and experimental surgery reflects the close resemblance of these animals to human anatomy and physiology 1-6.The size of the Göttingen minipig permits the use of surgical equipment and advanced imaging modalities similar to those used in humans 6-8. The aim of this instructional video is to increase the awareness on the value of minipigs in biomedical research, by demonstrating how to perform tracheal intubation, transurethral bladder catheterization, femoral artery and vein catheterization, as well as transcardial perfusion.

Endotracheal Intubation should be performed whenever a minipig undergoes general anesthesia, because it maintains a patent airway, permits assisted ventilation and protects the airways from aspirates. Transurethral bladder catheterization can provide useful information about about hydration state as well as renal and cardiovascular function during long surgical procedures. Furthermore, urinary catheterization can prevent contamination of delicate medico-technical equipment and painful bladder extension which may harm the animal and unnecessarily influence the experiment due to increased vagal tone and altered physiological parameters. Arterial and venous catheterization is useful for obtaining repeated blood samples and monitoring various physiological parameters. Catheterization of femoral vessels is preferable to catheterization of the neck vessels for ease of access, when performing experiments involving frame-based stereotaxic neurosurgery and brain imaging. When performing vessel catheterization in survival studies, strict aseptic technique must be employed to avoid infections6. Transcardial perfusion is the most effective fixation method, and yields preeminent results when preparing minipig organs for histology and histochemistry2,9. For more information about anesthesia, surgery and experimental techniques in swine in general we refer to Swindle 2007. Supplementary information about premedication and induction of anesthesia, assisted ventilation, analgesia, pre- and postoperative care of Göttingen minipigs are available via the internet at http://www.minipigs.com10. For extensive information about porcine anatomy we refer to Nickel et al. Vol. 1-511. 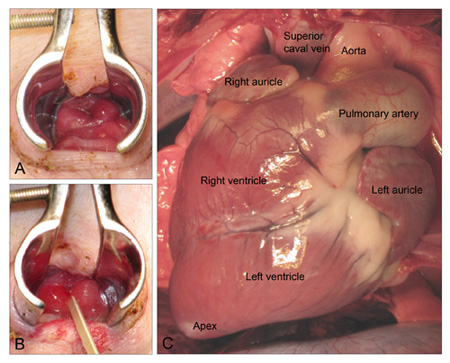 Figure 1. A: The female Göttingen minipig external urethral opening. B: The urethral opening after insertion of catheter. C: Ventral view of the minipig heart after median sternotomy. 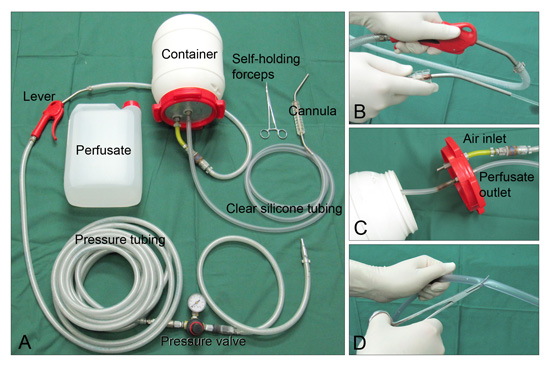 Figure 2. A: The perfusion system consists of inlet tubing with an adjustable pressure valve and a lever used to control inlet of compressed air into the container holding the perfusate. Clear silicone tubing connects the container to a blunt-tip cannula made from a 4 mm steel pipe. B and C: By compressing the inlet lever, the pressure rises in the container and the perfusate is propelled through the cannula. D: When the clear silicone tubing and cannula are filled with perfusate, the flow is stopped with a clamp and the system is ready for use.

This presentation provides step-by-step visual instructions on how to perform four frequently used procedures in minipig research12,13. The techniques described may be used with little or no adaptation in landrace pigs and other large research animals such as dogs and sheep14. Aseptic technique must be employed to avoid infections, when performing the described procedures in survival studies.

Induction of anesthesia is important for animal welfare and scientific reasons, and should provide absence of corneal reflexes and good muscular relaxation, before endotracheal intubation is attempted. However, because the anaesthetics used for induction are not given in fixed doses, but administered until the desired effect is observed, it is important to closely monitor the animal due to the risk of apnoea, especially if using propofol6,10. For tracheal intubation, the use of xylocaine spray or muscle relaxant can facilitate the introduction of the tube, but the use of neuromuscular blockers should only be done by personnel who are well-trained in such procedures so as to conform with ethical requirements. Care should be taken not to traumatize the laryngeal passage during intubation, in order to avoid tracheal swelling and edema. Airway edema can be treated with NSAID or similar anti-inflammatory drugs10. Pigs can be intubated from various positions, but having the animal on its back tends to be easier for those who regularly carry out human intubation, as it presents the airway in a similar manner6. The most common error during intubation is inadvertent placement of the tube in the esophagus, which is situated just below the laryngeal passage when the animal is placed on its back. Note, the tube should never be advanced without first clearly identifying the arytenoids cartilages and vocal cords.

Transurethral catheterization of the urinary bladder through the urethra is easily done in female pigs, while this procedure is extremely difficult, perhaps impossible, in males6. It should be noted that since the female urethral orifice is anterior to the vagina, the larger vaginal opening can be mistakenly catheterized. The use of sterile and disinfecting lubricant is advisable for survival studies. Furthermore, lubricant with local anesthetic effect may ease the catheterization procedure.

When performing femoral artery and vein catherization, the choice of vessel catheters and how they are secured differ between non-survival and survival studies, especially when catheters are implanted for an extended period of time6. For instance catheters for chronic implantation should be highly biocompatible, have retention beads or cuffs for fixation as well as not traumatize the vessel wall over time, thus inducing thrombosis or erosion6.

In the present video, we use a closed system powered by compressed air for transcardial perfusion. Another option is to use a system driven by gravity. The advantage of gravity systems in comparison to systems utilizing compressed air is that they are simple, efficient, and present no risk of pressurized air entering the vascular system. However, the hydrostatic pressure exerted by gravity systems changes continuously during perfusion, and this can affect the histological results15. Depending on which type of histopathological studies one wants to perform, it may be advantageous to perfuse the animal with heparinized saline first. This is particular importantance when performing immunofluorescent staining in order to avoid autofluorescence problems caused by erythrocytes. Furthermore, if the organ of interest is the brain, the descending aorta could be clamped to save fixative. However, in pigs, this step entails additional dissecting and will prolong the procedure.

All procedures were approved by the Danish Experimental Animal Inspectorate, Danish Ministry of Justice and were conducted according to the "Principles of laboratory animal care" (NIH publication No. 86-23, revised 1985).

The study was financially supported by the Lundbeck Foundation, The Karen Elise Jensen Foundation, The Health Research Fund of Central Denmark Region and The Institute of Clinical Medicine Aarhus University Hospital. We acknowledge with gratitude the skilful assistance of Donald F Smith, Anders Steen Soerensen, Henrik Soerensen, Asbjoern Ettrup-Christensen, and the staff at Paaskehoejgaard. 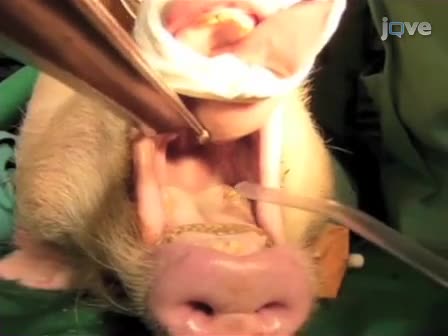