Cell transplantation is an essential technique for studying tissue regeneration and for developing cell-based therapies of disease. We demonstrate here a microsurgical technique that permits the transplantation of genetically labeled cells directly into the kidney of adult zebrafish fish.

Regenerative medicine based on the transplantation of stem or progenitor cells into damaged tissues has the potential to treat a wide range of chronic diseases1. However, most organs are not easily accessible, necessitating the need to develop surgical methods to gain access to these structures. In this video article, we describe a method for transplanting cells directly into the kidney of adult zebrafish, a popular model to study regeneration and disease2. Recipient fish are pre-conditioned by irradiation to suppress the immune rejection of the injected cells3. We demonstrate how the head kidney can be exposed by a lateral incision in the flank of the fish, followed by the injection of cells directly in to the organ. Using fluorescently labeled whole kidney marrow cells comprising a mixed population of renal and hematopoietic precursors, we show that nephron progenitors can engraft and differentiate into new renal tissue - the gold standard of any cell-based regenerative therapy. This technique can be adapted to deliver purified stem or progenitor cells and/or small molecules to the kidney as well as other internal organs and further enhances the zebrafish as a versatile model to study regenerative medicine.

3. Load the cell solution into a Hamilton syringe.

4. Transplantation of progenitor cells directly into the kidney.

The overall strategy of the transplantation is illustrated in Figure 1. For our renal studies, the kidney is dissected and analyzed by EGFP fluorescence. Engraftment and differentiation of renal progenitor cells is detected as early as seven days post transplant. This is evident by the presence of multiple clusters of EGFP+ renal epithelial cells (Figure 2). By 18 days post transplant, we detect an average of 24 EGFP+ nephrons, indicating that donor cells have formed new kidney tissue (Figure 3). To demonstrate long-term engraftment, we dissected a recipient fish 59 days post transplant (Figure 4). This fish had many nephrons at the site of injection (red arrowhead) in addition to multiple nephrons at distant sites (white arrowheads), suggesting that renal progenitor cells are migratory. This technique is faster and more efficient compared to when cells are injected into the circulation via the heart, which takes approximately three months to detect engraftment. 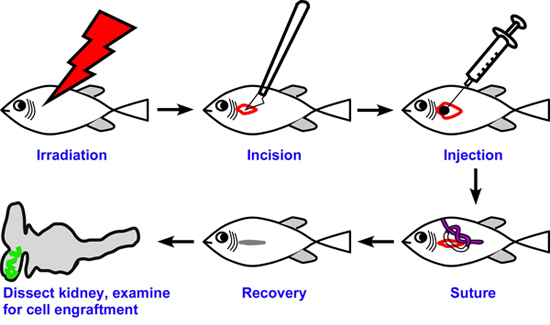 Figure 1. Overall scheme of transplantation. Non-transgenic recipient fish are irradiated to suppress immune rejection of transplanted cells. Three days later, an incision is made on the flank of the fish and donor progenitor cells are injected into the exposed head kidney. The incision is closed up with one suture and fish are placed back into the system for recovery. Kidneys of recipient fish are dissected at later time points and analyzed for engraftment and progenitor activity. 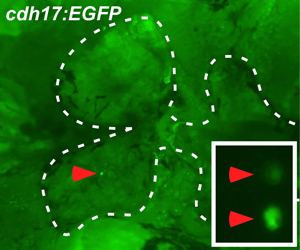 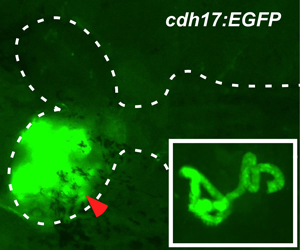 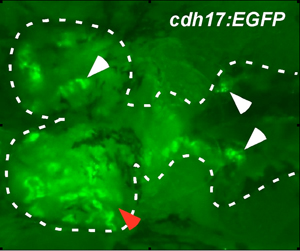 Cell transplantation techniques are crucial for regenerative studies and are the gold standard assay for measuring stem cell activity. Here, we report a method for transplanting cells directly into the kidney of adult zebrafish to determine stem and progenitor cell activity. This procedure involves making an incision through the muscle to expose the head kidney, followed by injection of cells directly into the kidney. The incision is closed with a single suture and the operated fish have a 90-100% survival rate. In our experiments, engrafted renal progenitor cells are detected in 80-100% of the transplanted fish by seven days post transplantation. One limitation of this technique is that the incision is near the dorsal aorta, which can be easily ruptured by the scalpel. However, once mastered, the rate of bleeding can be reduced to less than one percent. Our method could be adapted to deliver other cell types (blood, stromal, or vascular) as well as small molecules to the kidney. The development of this technique will help advance regenerative studies and permit stem and progenitor cell potential to be assessed in vivo. 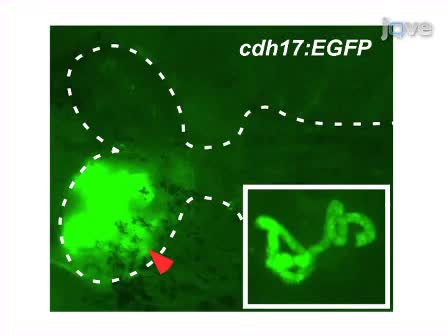