Neurons are first characterized electrophysiologically. Then the cytoplasm from the recorded neuron is aspirated and subjected to reverse transcription-PCR analysis to detect the expression of mRNAs for neurotransmitter synthesis enzymes, ion channels, and receptors.

In mammalian central nervous system, different types of neurons with diverse molecular and functional characteristics are intermingled with each other, difficult to separate and also not easily identified by their morphology. Thus, it is often difficult to analyze gene expression in a specific neuron type. Here we document a procedure that combines whole-cell patch clamp recording techniques with single-cell reverse transcription polymerase chain reaction (scRT-PCR) to profile mRNA expression in different types of neurons in the substantial nigra. Electrophysiological techniques are first used to record the neurophysiological and functional properties of individual neurons. Then, the cytoplasm of single electrophysiologically characterized nigral neurons is aspirated and subjected to scRT-PCR analysis to obtain mRNA expression profiles for neurotransmitter synthesis enzymes, receptors, and ion channels. The high selectivity and sensitivity make this method particularly useful when immunohistochemistry can not be used due to a lack of suitable antibody or low expression level of the protein. This method is also applicable to neurons in other brain areas.

scRT-PCR detected mRNA for glutamic acid decarboxylase 1 (GAD1, the key enzyme for GABA synthesis and a marker for GABA neurons) in electrophysiologically identified SNr GABA neurons, but not in DA neurons (Fig. 1B4,5). In contrast, scRT-PCR detected mRNA for tyrosine hydroxylase (TH, key enzyme for dopamine synthesis and a marker for DA neurons) in electrophysiologically identified SNc and SNr DA neurons, but not in GABA neurons (Fig. 1B4,5). So scRT-PCR results confirm the electrophysiological neuron identification. Next, scRT-PCR was used to profile the expression of voltage-activated Kv3 channel subunits, Kv3.1, Kv3.2, Kv3.3 and Kv3.4. These subunits contribute to form voltage-gated K+ channels of diverse properties depending on subunit composition (Ding et al. 2011). In the example SNr GABA neuron shown in Fig. 1B4, mRNAs for Kv3.1, Kv3.2, Kv3.3 and Kv3.4 were detected. In the example SNr DA neuron shown in Fig.1B5, only Kv3.2, Kv3.3 and Kv3.4 were detected. In our pooled data, Kv3.1 was more frequently detected in SNr GABA neurons than in nigral DA neurons, indicating a higher expression level of Kv3.1 in the fast-spiking SNr GABA neurons (Ding et al. 2011). 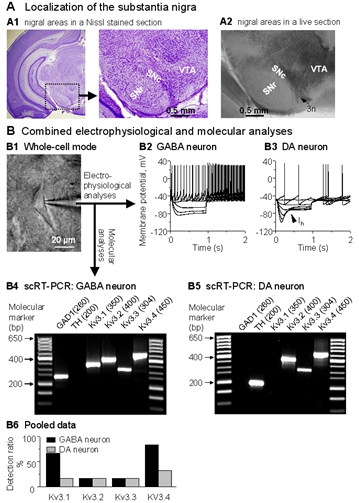 Based on our experience, several factors can lead to false negative scRT-PCR results. These factors include failure in aspirating sufficient amount of the cytoplasm due to patch pipette tip clogging, RNase contamination, and inefficient PCR primers. Patch pipette tip clogging usually can be seen on the video monitor and indicated by increased access resistance. RNase contamination can be avoided by thorough deactivation and wearing gloves. PCR primer effectiveness should be tested by using total RNA from a brain tissue punch (Zhou et al. 2008; Ding et al. 2011).

Since we always use DNase to first treat our samples before RT, we have not encountered false positive results. Theoretically, without DNase digestion, genomic DNA contamination and thus false positive detection may occur when the gene is intronless or the primer pair does not span the intron region.

The combination of patch clamp recording in brain slice with scRT-PCR we demonstrated here provide an excellent method to investigate the mRNA expression profiles for ion channels, receptors, and key enzymes for neurotransmitter synthesis in individually characterized neurons. This is particularly useful when the protein in question can not be detected and localized using other methods such as immunohistochemistry due to low expression level and/or lack of suitable antibody (Surmeier et al. 1996; Zhou et al. 2009). The high sensitivity and selectivity of scRT-PCR allow the detection of low abundance mRNAs (Surmeier et al. 1996). Additionally, this method allows the correlation of gene expression with electrophysiological and functional properties in individually characterized neurons (Liss et al. 2001; Zhou et al. 2008, 2009; Ding et al. 2011). Based on literature evidence and our experience, this method is applicable to every neuron types in the nervous systems. 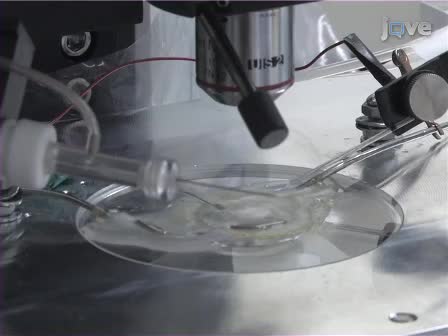