We describe a method to localize fluorescently tagged proteins in electron micrographs. Fluorescence is first localized using photo-activated localization microscopy on ultrathin sections. These images are then aligned to electron micrographs of the same section.

Mapping the distribution of proteins is essential for understanding the function of proteins in a cell. Fluorescence microscopy is extensively used for protein localization, but subcellular context is often absent in fluorescence images. Immuno-electron microscopy, on the other hand, can localize proteins, but the technique is limited by a lack of compatible antibodies, poor preservation of morphology and because most antigens are not exposed to the specimen surface. Correlative approaches can acquire the fluorescence image from a whole cell first, either from immuno-fluorescence or genetically tagged proteins. The sample is then fixed and embedded for electron microscopy, and the images are correlated 1-3. However, the low-resolution fluorescence image and the lack of fiducial markers preclude the precise localization of proteins.

Alternatively, fluorescence imaging can be done after preserving the specimen in plastic. In this approach, the block is sectioned, and fluorescence images and electron micrographs of the same section are correlated 4-7. However, the diffraction limit of light in the correlated image obscures the locations of individual molecules, and the fluorescence often extends beyond the boundary of the cell.

We outline the nano-fEM technique in five steps. First, the sample is fixed and embedded using conditions that preserve the fluorescence of tagged proteins. Second, the resin blocks are sectioned into ultrathin segments (70-80 nm) that are mounted on a cover glass. Third, fluorescence is imaged in these sections using the Zeiss PALM microscope. Fourth, electron dense structures are imaged in these same sections using a scanning electron microscope. Fifth, the fluorescence and electron micrographs are aligned using gold particles as fiducial markers. In summary, the subcellular localization of fluorescently tagged proteins can be determined at nanometer resolution in approximately one week.

Steps 3.1-3.3 are carried out in the same cryovials used for freeze-substitution. Infiltration and polymerization are carried out at -30 °C in the AFS to preserve the fluorescent protein.

Histone tagged with tdEos can be stably expressed in the nematode C. elegans, and the transgenic animals were processed using the protocol described above. The PALM and electron micrographs were acquired from the same section (Figure 1). To align the images, the sum TIRF image, which sums the fluorescence over the entire time course, is overlaid on the electron micrograph. The gold nanoparticles appear in both the fluorescence and electron micrographs and can be used to align the two images using the 'transform' function in Photoshop (Figure 1A and B). Then, the same 'transform' value was applied to the PALM image (Figure 1C). At this magnification, structural detail cannot be distinguished, so we zoomed into a region near the top end of the micrograph (Figure 2). In the high magnification image, subcellular details such as a nucleus, a nucleolus, nuclear pores, and endoplasmic reticulum could be observed. Moreover, the tagged Histone molecules are exclusively localized to the nucleus but not to the nucleolus, as expected. The correlative PALM and electron microscopy thus allows for protein localization at the highest resolution.

Five problems can compromise the quality of the images. First, ice crystal damage can distort ultrastructure (Figure 3A and B). Placing specimens in a cryo-protectant such as bacteria, which reduces the propagation of ice crystals, can reduce this damage. Nevertheless, one must still screen specimens by electron microscopy and discard those with freezing artifacts. Second, GMA does not cross-link to tissues like epoxy resins, and thus specimens often break loose from the surrounding plastic and stretch, shrink or even fall out of the section (Figure 3C and D). Dissection of the sample away from the bacteria or other cryo-protectant before embedding provides for greater adhesion of the plastic to the specimen (Figure 3C). Similarly, structures such as lipid droplets in the gut often dissociate from the tissues due to the absence of cross-linking (Figure 3E). Third, the incomplete polymerization of plastic causes stretching or folding of tissues (Figure 3F); the presence of oxygen in the sample also impedes the polymerization of GMA. Fourth, the poor sectioning quality of GMA often results in an inconsistent morphology (Figure 3G and H). GMA sections should be cut at 70 nm or thicker and at a speed of around 1.6 mm/s to minimize sectioning artifacts. Fifth, background autofluorescence from dust on the coverslip or section is inevitable. Autofluorescence from dust can be minimized by using pre-cleaned coverslips and by avoiding dust contamination from kimwipes and filter paper as described in the protocol. The PALM analysis program can edit out signals from the specimen or plastic that fluoresce longer than typical signals from fluorescent proteins (Figure 2 A and B). The final image will therefore be free of such artifacts. 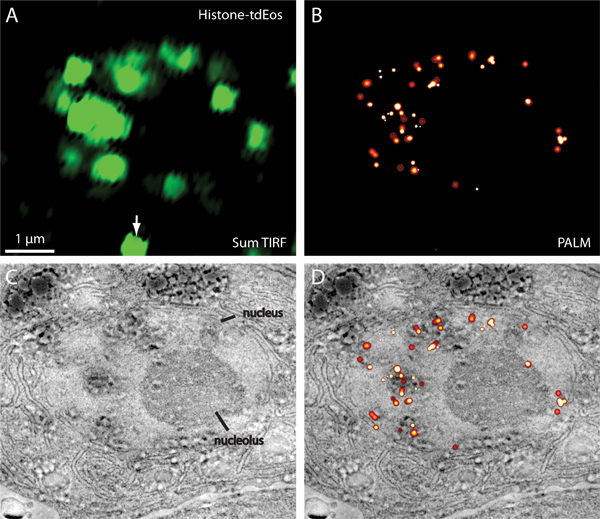 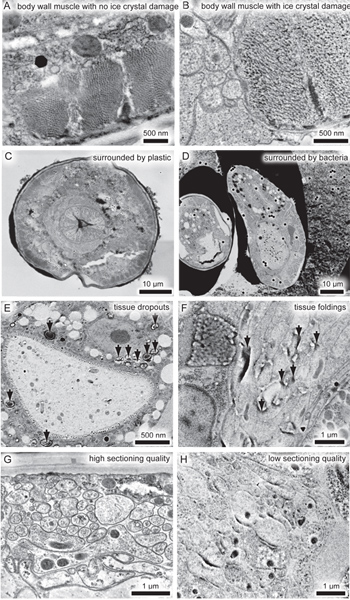 Here we describe how to preserve fluorescent proteins in plastic, localize the fluorescent proteins in sections, and image the ultrastructure using electron microscopy. Proteins were localized below the diffraction limit using PALM microscopy to nanometer resolution. To adapt this protocol to particular specimens, the following parameters should be considered: fluorophore, quantification, and alignment.

The choice of fluorescent protein or organic fluorophore depends on the application and the model system. We have tested a variety of fluorescent proteins, including EGFP, YFP, Citrine, mEosFP, mEos2, tdEos, mOrange, PA-mCherry, and Dendra12. The preservation of fluorescence from each fluorophore was similar, suggesting that all fluorescent proteins can be preserved using the described method. We chose tdEos because it expressed well in C. elegans, proteins remained functional when fused to tdEos, and because its photo-activation characteristics were optimal for PALM microscopy. However, aggregation or failed expression of tdEos has been occasionally observed12.

In PALM, the number of molecules can be quantified because fluorescence of each molecule is separated spatially and temporally. However, quantification may be misleading for four reasons: oxidation, undercounting, overcounting, and overexpression. First, a fraction of the fluorescent proteins can be denatured or oxidized during sample processing5,12. Although ~90% of the fluorescence signal was preserved through fixation and embedding in our protocol, oxidation of the fluorescent protein may occur after the specimen has been sectioned and the surface exposed to oxygen. Second, the activation of photo-activatable proteins is stochastic, and thus multiple molecules can be activated in a given diffraction limited spot8. Fluorescence from the multiple molecules will appear as one spot, and thus the total number of proteins will be undercounted. Third, a similar problem can lead to overcounting. In PALM, each fluorescent protein is localized and then "erased" by bleaching. However, fluorescent proteins can return from the dark state without being permanently bleached18. Such molecules will then be counted multiple times. Fourth, tagged proteins are expressed as transgenes and are often present in multiple copies, which can lead to overexpression. Therefore, quantification from PALM can be used to estimate but not precisely determine the number of molecules in a given location.

The alignment of a PALM image with an electron micrograph can also be challenging because of the resolution difference in light and electron microscopy and distortion caused by the electron beam. Gold particles serve as tightly localized fiducial markers in electron micrographs. However, fluoresecence from gold particles is not photo-activated, and appears as a large diffraction-limited spot. Thus, the placement of a fluorescence image over an electron micrograph is an estimate. Distortions can also arise from interactions of electrons with the plastic section. Acrylic resins such as GMA are less stable under the electron beam, and the dimensions of the plastic can be altered. Under these circumstances, aligning the fluorescence with ultrastructure may require non-linear transformation of the fiducial markers.

Production and Free Access to this article is sponsored by Carl Zeiss, Inc. 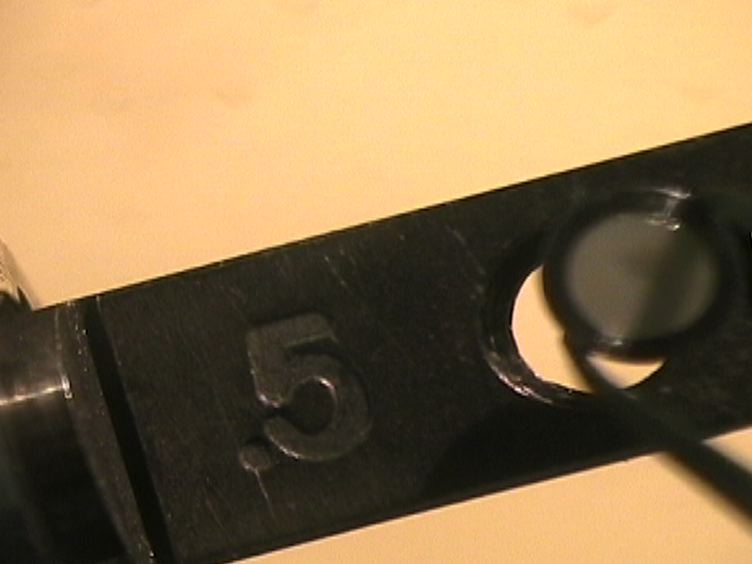