Zebrafish have been a valuable tool for many research areas. Here we demonstrate a method to elicit a visual response and calculate a functional visual acuity in the adult zebrafish.

Zebrafish are a proven model for vision research, however many of the earlier methods generally focused on larval fish or demonstrated a simple response. More recently adult visual behavior in zebrafish has become of interest, but methods to measure specific responses are new coming. To address this gap, we set out to develop a methodology to repeatedly and accurately utilize the optokinetic response (OKR) to measure visual acuity in adult zebrafish. Here we show that the adult zebrafish's visual acuity can be measured, including both binocular and monocular acuities. Because the fish is not harmed during the procedure, the visual acuity can be measured and compared over short or long periods of time. The visual acuity measurements described here can also be done quickly allowing for high throughput and for additional visual procedures if desired. This type of analysis is conducive to drug intervention studies or investigations of disease progression.

Zebrafish (Danio rerio) are a good model to study visual physiology due to the similarity of their retina to other vertebrates, their short life cycle, and the availability of genetically altered mutants1,2. The optokinetic reflex/response/nystagmus (OKR) is a combination of smooth pursuit and rapid saccade eye movements. For more than 60 years clinicians have demonstrated that the OKR can be used for objectively measuring visual acuity in patients and is especially useful for determining infant visual capabilities3-5. The first recorded use of OKR in animals was using pigeons in the 1950s6. More recently, the OKR has become a valuable tool for assessing the visual function in larval zebrafish and is often used to screen for genetic mutants that have a visual impairment1,2. While the OKR has been widely used to determine visual function in larval zebrafish, it has only recently been demonstrated in adult zebrafish7-10. A recent paper by Tappeiner et al. uses a commercially available optomotor system traditionally used for mice, OptoMotry, to demonstrate that the visual acuity of the adult zebrafish remains quite constant, ~0.59 cycles per degree (cpd), even across various angular velocities7.

Although the OKR has proven to be quite useful in larval zebrafish studies, other methods for visual behavior have been used in zebrafish adults with varying degrees of success. The escape response assay demonstrated that albino and ruby zebrafish, both pigmentation mutants, have reduced visual responses in bright light conditions11,12. This same escape response assay has also successfully identified night blindness d mutants, albeit at 2 years of age13. However, the escape response assay is not without flaws. It is difficult to ascribe to an exact visual function and is only a gross approximation of visual changes - meaning it takes a large change before the change is identified.

Another method that has been developed for identifying adult zebrafish with visual impairments is the optomotor response (OMR)11. In this assay, fish are placed in a circular tank with an opaque column in the center. Black and white stripes rotate around the tank and the fish is tasked with swimming in the direction of the stripe motion. Like the escape response, the OMR focuses on the visuomotor capabilities of the adult zebrafish. It has however been used successfully to identify fish with visual impairments, such as the lrp2/bugeye mutants14. The lrp2/bugeye zebrafish exhibit buphthalmos, elevated intraocular pressure, diminished OMR, and progressive retinal degeneration14,15.

Many studies have used the visuomotor capabilities in adult zebrafish, which are often subjective and cannot be quantitatively analyzed. By using the OKR, one can study the visual acuity of adult fish more objectively. We have built our own OKR device, modeled after one initially used for larval studies1. In this study we demonstrate that the OKR can be used to calculate both monocular and binocular visual acuity in zebrafish.

All animal husbandry and experiments should be approved and conducted in accordance with guidelines set forth by the Institutional Animal Care and Use Committee of the respective institution or other legal requirements.

The OKR device as explained above and shown in Figure 1 functions with minimal maintenance. As noted in step 2.3, immobilizing the tail is critical to keeping the fish restrained during the recording. Sufficiently immobilized, the fish can be kept in the OKR device for prolonged periods of time. Consequently, care should be taken during the initial immobilization steps, so that more data can be collected for each individual fish.

The binocular OKR is readily elicited in normal adult fish. By following the procedure above one can find visual acuities for zebrafish of many ages (Figure 2). The best binocular spatial acuity we recorded was 0.74 cpd. As noted in Figure 2, the binocular acuity generally increases with age (n=46; p = 0.002 ANOVA using SPSS v14), but levels off after about 12 months of age. When we compared the measured visual acuity in 5 month old wild type fish to age-matched lrp2/bugeye fish, we found that the lrp2/bugeye fish had significantly reduced acuity (p < 0.001; wild type: 0.49±0.05 cpd; n=8; lrp2/bugeye: 0.35±0.06; n=10; Student's T-test using Excel).

By occluding the right eye the visual acuity for the left eye can be determined and vice versa. When compared to the binocular acuity, binocular summation is observed similarly to human vision17 (Figure 3). The binocular acuity was generally 5-10% better than either right (OD) or left (OS) acuities measured independently. For some individual fish the difference was a 25% improvement. 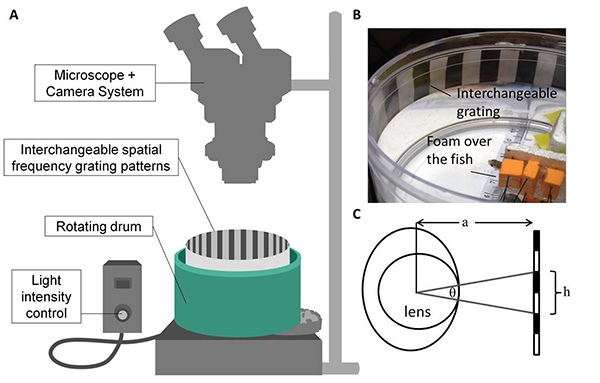 Figure 1. OKR recording. A) The OKR device consists of a 14.5 cm diameter rotating drum and microscope with adjustable light intensity settings (300-8,000 lux). A camera provides a live feed on an adjacent monitor. The rotating drum has various speed settings in both clockwise and counterclockwise directions and interchangeable spatial frequency gratings are inserted and removed as needed. B) Fish are secured and placed in the center of the rotating drum. C) Cycles per degree (cpd) is calculated using cpd= 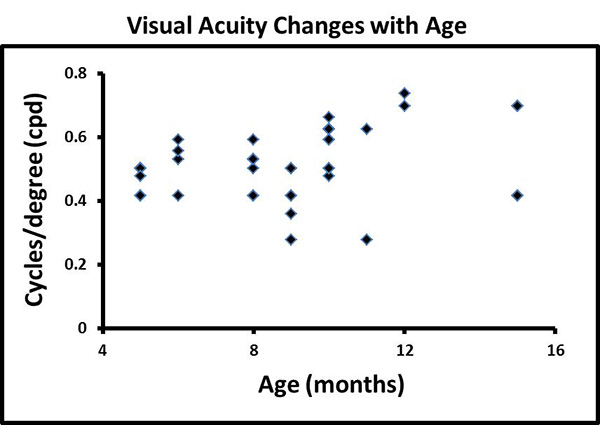 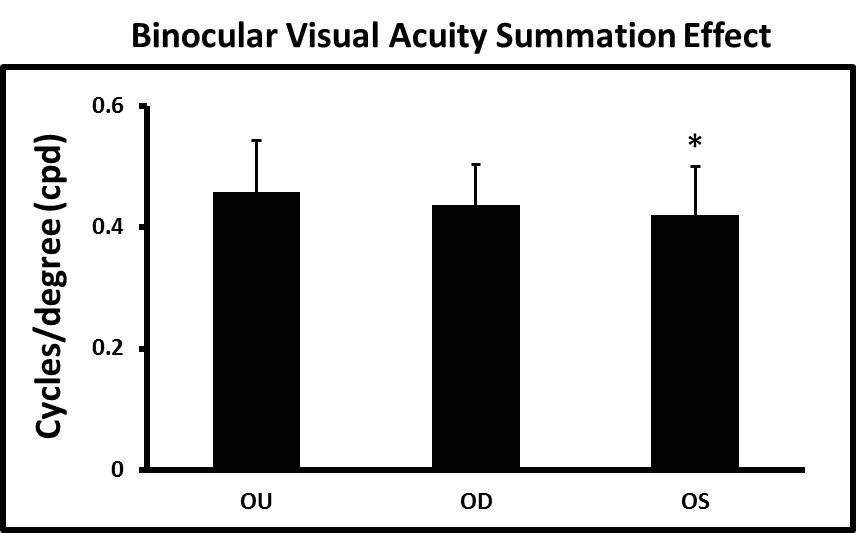 On occasion the fish may escape into the water tank. It is critical to immobilize the tail. Additionally the use of a thin sponge/towel over the fish's body was also found to be invaluable to keeping the fish suspended for prolonged periods of time. We were able to keep fish immobilized for more than 30 min using this procedure without harming the fish. This amount of time is more than sufficient to do the binocular and both monocular acuities.

The presentation of the grating can be either done as described here and elsewhere using a physically rotating drum or by presenting a digital display18-22. Both types have specific advantages and disadvantages. We chose to use the physical rotation both for cost reasons and technical specifications. Excluding the computer and imaging equipment, the OKR device described here can be built for around $150.

Interestingly, adult zebrafish vision when compared to human vision (20/20) is approximately 20/1,000 (when 0.60 cpd is converted to -0.3 logMAR). Although this may seem poor, the zebrafish eyes are very well suited for its environment. Despite the visual task of looking through 6.5 cm of water, a few millimeters of polycarbonate, and another centimeter of air, the fish perform quite well! We found that the adult zebrafish acuity is about 70% of what would be predicted given their photoreceptor spacing.23 Contrast that with optimal human performance ~20/12, which is about 80% of the predicted 20/10, and OKR technique for measuring visual capability in adult zebrafish is impressive24,25.

The technique of measuring independent eye visual acuities would allow for studies in which one eye could be treated and the other used as a control. Additionally, fish with asymmetric eye development such as the lrp2/bugeye or fish that develop cataract could be monitored more accurately. It should be noted that care needs to be taken to accurately measure the distance from the eyes to the stripes and to occlude the full field of vision. This technique should open the door to more accurate and specific measures of zebrafish visual function.

Funding provided by the Western University of Health Sciences College of Optometry to DJC. Special thanks to Irisa Tam for graphic design. 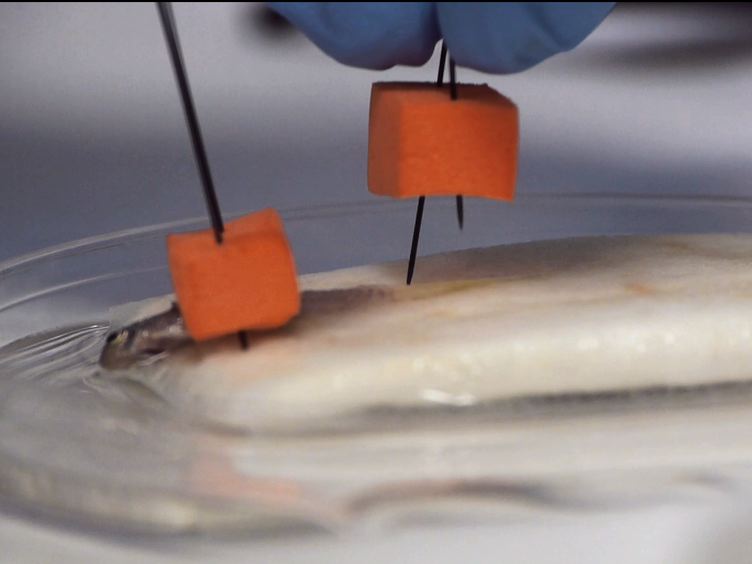