A qPCR assay was developed for detection of Escherichia coli O157:H7 targeting a unique genetic marker, Z3276. The qPCR was combined with propidium monoazide (PMA) treatment for live cell detection. This protocol has been modified and adapted to a 96-well plate format for easy and consistent handling of numerous samples

A unique open reading frame (ORF) Z3276 was identified as a specific genetic marker for E. coli O157:H7. A qPCR assay was developed for detection of E. coli O157:H7 by targeting ORF Z3276. With this assay, we can detect as low as a few copies of the genome of DNA of E. coli O157:H7. The sensitivity and specificity of the assay were confirmed by intensive validation tests with a large number of E. coli O157:H7 strains (n = 369) and non-O157 strains (n = 112). Furthermore, we have combined propidium monoazide (PMA) procedure with the newly developed qPCR protocol for selective detection of live cells from dead cells. Amplification of DNA from PMA-treated dead cells was almost completely inhibited in contrast to virtually unaffected amplification of DNA from PMA-treated live cells. Additionally, the protocol has been modified and adapted to a 96-well plate format for an easy and consistent handling of a large number of samples. This method is expected to have an impact on accurate microbiological and epidemiological monitoring of food safety and environmental source.

Numerous probes for genes or hypothetical open reading frames (ORFs) in E. coli O157:H711 were designed for qPCR assay based on the clues from DNA genotyping microarrays from our laboratory and by searching within the GenBank database of the National Center for Biotechnology Information. The sequence of Z3276 ORF, which is a fimbrial gene11, was selected for qPCR assay. Subsequently, a qPCR assay was developed through numerous trials on PCR parameters such as concentrations of primers and probes, as well as annealing and extension temperatures (data not shown). After incentive inclusivity and exclusivity tests on reference strains such as E. coli O157:H7, non-O157 and Shigella strains in the qPCR, the ORF Z3276 was identified as a specific and strong genetic marker for identification of E. coli O157:H7. Then we develop a new qPCR method using this unique biomarker for identification of E. coli O157:H7.

Another challenge in detection of E. coli O157:H7 in contaminated foods and environment is accurate determination of live cells from samples. The extended presence of DNA from dead cells and inability to differentiate viability in PCR assay could cause false-positive readings, resulting in overestimation of live cell numbers in detection. Consequently, this limits the PCR usage in accurate detection of foodborne pathogens12. A novel approach to differentiate DNA of the dead cells has been taken by combining propidium monoazide (PMA) treatment with PCR procedure in the last few years13-15. PMA is able to go inside of dead cells, and intercalate into the DNA when exposed to light, but it cannot go inside of live cells to react with the DNA of the live cells. Thus, in PMA-treated mixtures of live and dead cells, the DNA of dead cells cannot be amplified in PCR13. We combined PMA treatment with the newly developed qPCR assay to selectively detect live E. coli O157:H7 cells. Additionally, we have made the PMA-qPCR assay possible for high throughput detection.

2. Primer and Probe Design for the qPCR Assay

One of the key factors of this assay is the sensitivity and specificity of the Z3276 probe used in the qPCR. It can detect as low as a few copies of the genome of DNA of E. coli O157:H7 as shown in Figure 1A. Of the 120 non-O157 strains examined, including the six major non-O157 STEC strains, O104:H4 strains, Salmonella, and Shigella strains, no cross-reactivity was found, as shown in Table 1.

Combination of the PMA treatment with qPCR

Incubating E. coli O157:H7 cells with PMA (50 mM) for 5 min in the dark and exposing to light for 2 min were selected for PMA treatment conditions. Additionally, we modified PMA treatment procedure. Compared with various transparent microtubes used in the cross-linking step, a 96-well plate was found to be more efficient to reach the optimal cross-linking effect and more convenient than handling a large number of sample tubes during the light exposure process.

The effects of PMA-mediated inhibition of amplification of DNA from dead cells on this qPCR assay were shown in Figure 1 by using DNA derived from two serial 10-fold live or dead cell dilutions. The results show that the curves generated from the live cells treated with PMA (red curve) and without PMA (blue curve) seem linear and nearly identical to one another. Slight CT value differences were shown between the live cells treated with PMA and without PMA (Figure 1A), suggesting that PMA treatment had little effect on amplification of DNA of the live cells in the qPCR. But a 15-CT value difference (32,000 fold) was shown between the dead cells treated with PMA and without PMA, demonstrating that PMA treatment efficiently suppressed DNA amplification from the dead cells (Figure 1B). 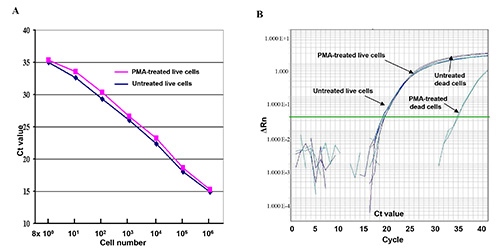 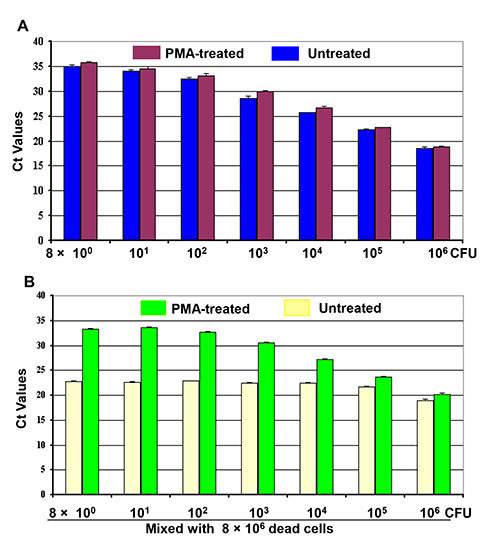 A primary aim of the study involves use of an ORF Z3276, a unique to E. coli O157:H7, as a sole biomarker for qPCR assay. At present, most qPCR assays are targeting virulence genes, such as stx1, stx2, and eaeA1,2,5,6 or shared phenotypic genes, such as uidA3,4, rfbE and fliC genes8,9. Occasionally, a species or strain cannot be definitely identified by the virulence gene(s), such as stx1and stx2 genes, as those genes are present in different species or strains16 as well. Using rfbE and fliC for target genes, both genes are needed to be used for complete identification17. Using ORF Z3276 as a biomarker, this qPCR assay has been demonstrated to be sensitive and specific assay (Table 1). This assay has been subjected to stringent inclusivity and exclusivity tests, including O157:H7 strains (n = 367), over 100 non-O157 strains, and other pathogenic species, such as Salmonella and Shigella. All O157:H7 strains examined were positively detected, and no cross-reactivity was found from the non-O157 strains (Table 1), indicating that ORF Z3276 is a unique and strong biomarker for detection of E. coli O157:H7.

The other objective of the study is to selectively detect live cells from dead cells by PMA treatment before DNA extraction. PMA can penetrate into the dead cells with compromised membrane and bind to DNA, and thus inhibits the DNA amplification of dead cells in PCR13. We have modified the PMA-treatment procedure, and adapted it to a 96-well plate format for the procedure. The right intensity of light exposure is essential to obtain the optimal cross-linking effect. Previously, microtubes have been used in this step13-15. However, separate microtubes are difficult to handle in light exposure step, and these tubes are not absolutely transparent to obtain the best cross-liking. Using a 96-well plate, we improved the efficiency of PMA-treatment. These changes may impact the assay in several ways: they make it easier to obtain a thorough and uniform cross-linking effect, especially with numerous samples; the treated samples can be moved from one plate to another to make it possible for detection of large number of samples; and they provide this PMA-qPCR assay with automation potential for the whole process. The limitation of this PMA-qPCR assay is that PMA treatment increases the PCR assay cost somewhat and slightly reduced the sensitivity of PCR assay.

We thank the U.S. Department of Homeland Security for providing part of the funding. 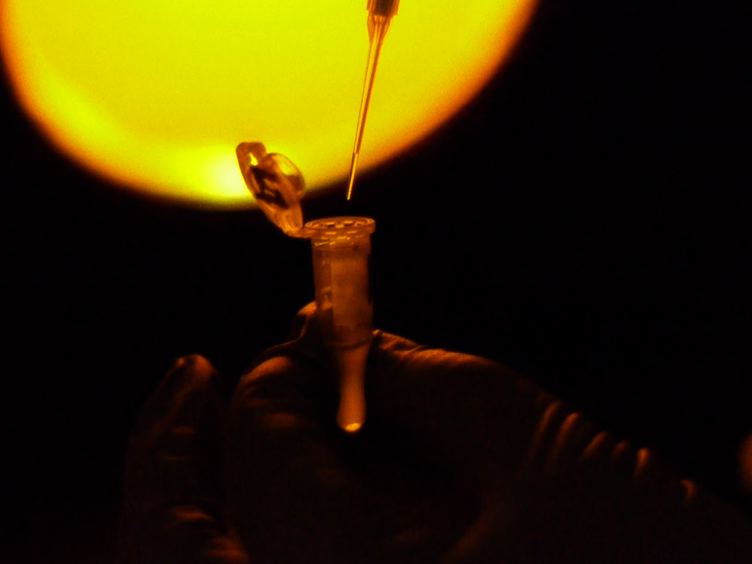