Calcium ions play an integral role in neuron function: They act as intracellular signals that can elicit responses such as altered gene expression and neurotransmitter release from synaptic vesicles. Within the cell, calcium concentration is highly dynamic due to the presence of pumps that selectively transport these ions in response to a variety of signals. Calcium imaging takes advantage of intracellular calcium flux to directly visualize calcium signaling in living neurons.

This video begins with an overview of the key reagents used for this technique, known as calcium indicator dyes. The discussion includes an introduction to the commonly used dye Fura-2 and some basic principles behind how both ratiometric and non-ratiometric calcium indicators work. Next, a typical calcium imaging experiment is presented, from preparing the cells and dye to capturing and analyzing the fluorescent images. Finally, several experimental applications of calcium imaging are provided, such as the study of neuronal network activity and sensory processing.

Calcium imaging is an extremely useful technique for investigating the variety of roles that calcium ions have in functioning neurons. Calcium ions generate a multitude of intracellular signals that control key functions, such as neurotransmitter release from synaptic vesicles. Calcium imaging methods enable direct measurement of the dynamic calcium flux within neurons and neuronal tissue. This video provides an overview of how calcium indicator dyes work, how a calcium imaging experiment is completed, and finally discusses some of the applications of this technique.

Calcium indicator dyes are modified chelator molecules, such as Fura-2, that are composed of two main components. The first is the chelator site that binds calcium in a selective way. The second is a fluorescent site that emits light at a specific wavelength when illuminated by an excitation wavelength of ultraviolet light.

The binding of calcium to the dye alters its fluorescence properties, which provides a way to quantify the changes in calcium concentration, which is represented here by the difference in fluorescent intensity emitted by this neuron at two different excitation wavelengths.

Most calcium indicator dyes are further modified to allow them to readily cross the cell membrane and are introduced either in the bath solution with the neurons or injected into brain tissue for whole-animal studies.

Dual excitation or emission dyes, like Fura-2, are called ratiometric calcium indicators. Non-ratiometric dyes that have single excitation and emission wavelengths do exist. However, they are more susceptible to photobleaching, which is weakening or loss of fluorescence with prolonged light exposure.

Begin by preparing the calcium indicator dye of choice, such as Fura-2, and mixing it with additional physiological solutions. Vortex the solution to ensure proper mixing. Once sufficiently mixed transfer into a dish. Now place the cover slip with the cultured neurons in the dish with the dye solution. Next, incubate the neurons in the dark for the required time at the appropriate temperature, which in this case is 30 minutes at 37 ˚C. After the incubation period, transfer the coverslip to a dish without the dye.

Now that the microscope stage is ready, bring the neurons into focus using visible light. Test the dye by illuminating the cells at 340 and 380 nm wavelengths. Recall that with Fura-2, non-activated neurons should emit more light when excited by 380 nm since calcium is not bound.

Next, adjust the camera settings in order to optimize the dynamic range before starting the experiment. Collect an image at each wavelength, then use the region of interest or ROI tool to measure the background intensity at each wavelength. Input the background values into the control software so that they can be subtracted from subsequent images.

Once the initial setup is complete, choose the five or so fields of view that are to be imaged for the experiment and save the coordinates in the control software. During the experiment the automated stage moves to a field, collects a ratio of the field intensity at 340 and 380 nm wavelengths, and moves on to the next field until all fields are collected.

In some experiments, a pharmacological agent is added to the perfusion fluid that causes changes in the intracellular calcium levels. A high potassium solution, which depolarizes neurons, can cause the intracellular calcium concentration to rise as shown in this time lapse series of images and serves as a good positive control. Once the data collection is completed, proceed to the analysis.

To analyze the results, select regions of interest that include neurons or parts of neurons using the software. Next, use the software to measure image ratiometric intensity information from both wavelengths at each ROI in all of the images collected. With this information, a quantitative assessment of the changes in intracellular calcium concentrations over time can be made.

Now that you have an understanding of how calcium imaging in neurons is achieved, let’s look at some of the ways this valuable method is applied in research today.

First and foremost, calcium imaging is used to investigate how intracellular calcium fluxuates in relation to neural activity.

In this study, individual neurons were filled with a calcium indicator dye while being patch-clamp recorded. The precise control of the membrane potential enabled by the patch-clamp technique provides insight into calcium flux dynamics.

Here, neuroscientists used calcium imaging to assess the fluorescent signal of 40 neurons. With this information, network properties such as signal propagation and neural correlations can be determined.

Calcium dynamics can also reveal how neurons process signals from the outside world, like smells.

In this experiment, pheromone-sensing organs extracted from a mouse nose were grown in culture. Neurons within the tissue were incubated with Fura-2 and imaged while being presented with odorants like urine or purified pheromones. By manipulating the expression of odorant receptor proteins in olfactory neurons, it is possible to directly visualize how a single protein influences the ability of a cell to respond to unique smells.

You’ve just watched JoVE’s introduction to calcium imaging in neurons. In this video, we discussed the properties behind the technique and reviewed a typical experiment.

Given calcium’s many important roles, calcium imaging will remain a vital tool in the understanding of neurons and how they interact with each other. 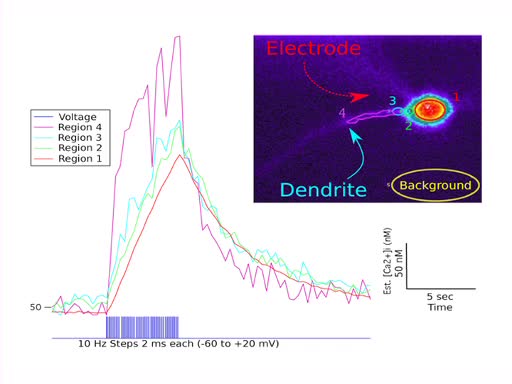