Solvated polymer brushes are well known to lubricate high-pressure contacts, because they can sustain a positive normal load while maintaining low friction at the interface. Nevertheless, these systems can be sensitive to wear due to interdigitation of the opposing brushes. In a recent publication, we have shown via molecular dynamics simulations and atomic force microscopy experiments, that using an immiscible polymer brush system terminating the substrate and the slider surfaces, respectively, can eliminate such interdigitation. As a consequence, wear in the contacts is reduced. Moreover, the friction force is two orders of magnitude lower compared to traditional miscible polymer brush systems. This newly proposed system therefore holds great potential for application in industry. Here, the methodology to construct an immiscible polymer brush system of two different brushes each solvated by their own preferred solvent is presented. The procedure how to graft poly(N-isopropylacrylamide) (PNIPAM) from a flat surface and poly(methyl methacrylate) (PMMA) from an atomic force microscopy (AFM) colloidal probe is described. PNIPAM is solvated in water and PMMA in acetophenone. Via friction force AFM measurements, it is shown that the friction for this system is indeed reduced by two orders of magnitude compared to the miscible system of PMMA on PMMA solvated in acetophenone.

Perfect lubricants reduce friction and wear for solids in relative motion even when normal loads are high. To achieve this, the lubricant should remain in the contact during sliding and at rest. However, under a positive normal load, simple, low-viscosity liquids are quickly squeezed out of the contact area and even higher-viscosity oils are expelled eventually. Yet, biological contacts, e.g., in human joints, remain lubricated with low-viscosity fluids at all times. Nature realizes such efficient lubrication using sugar chains attached to solid surfaces1. The hydrophilic sugar chains keep an aqueous liquid in the contact provided that the normal pressure does not exceed the osmotic pressure of the solvent2. Therefore, a lot of effort has been directed towards mimicking biological lubricants by grafting polymers to solid surfaces forming so-called polymer brushes3-12.

When two opposing polymer brushes are brought into contact, segments of the polymer chains on one side can move into the brush chain segments at the opposite side. This effect is called interdigitation13. When the brushes are in relative sliding motion, interdigitation is the main source of wear14 and friction15-17. In fact, recently, friction-velocity relations for sliding polymer brushes have been derived18. These scaling laws are based on interdigitation and the consequent stretching and bending of the polymers upon sliding. The main characteristics agree with results of surface forces apparatus experiments19 and of molecular dynamics (MD) simulations20. In the latter the degree of overlap can be directly quantified. Moreover, it was shown that the overlap between polyelectrolyte brushes can be tuned by applying an electric field21. Thus, if interdigitation can be circumvented, friction and wear in these systems would be significantly reduced.

In a recent publication22 we have shown via MD simulations that two immiscible solvated polymer brush systems prevent overlap between the brushes. Moreover, upon sliding the brushes, we found a decrease of the friction force by two orders of magnitude compared to the traditional miscible brush systems, in excellent agreement with our atomic force microscopy (AFM) measurements. Here, we explain in detail how to set up the AFM experiments of Ref. 22. The basic principle is sketched in Figure 1. On the two counter-surfaces, two different brushes, each solvated by their own preferred solvent, are needed. In this configuration each brush remains in its own solvent. Consequently, polymer segments from one brush do not penetrate into the other brush. Poly(methyl methacrylate) (PMMA) is grafted from an AFM colloidal probe and the brush is solvated by acetophenone. From the flat surface poly(N-isopropylacrylamide) (PNIPAM) is grafted and solvated in water. To compare the present system to traditional miscible systems, a second flat counter-surface bearing a PMMA brush solvated in acetophenone is made. The measured friction force upon sliding the immiscible system of PMMA on PNIPAM is approximately 1% of the friction for the miscible system of PMMA on PMMA. Note that the use of these particular brush systems is just one example. The presented method is generic and works due to the preferred absorbance of the solvents in the different brushes. Therefore, more types of brushes are expected to be applicable, as long as the chosen solvents de-mix in the two brushes. The effect is amplified by using two non-mixing solvents (like acetophenone and water) such that an extra slippery fluid-on-fluid-sliding interface is created22,23. 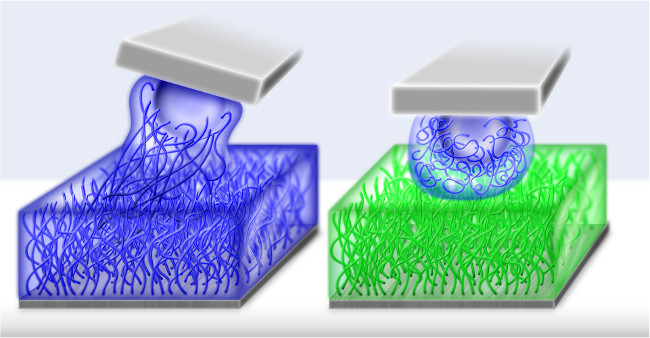 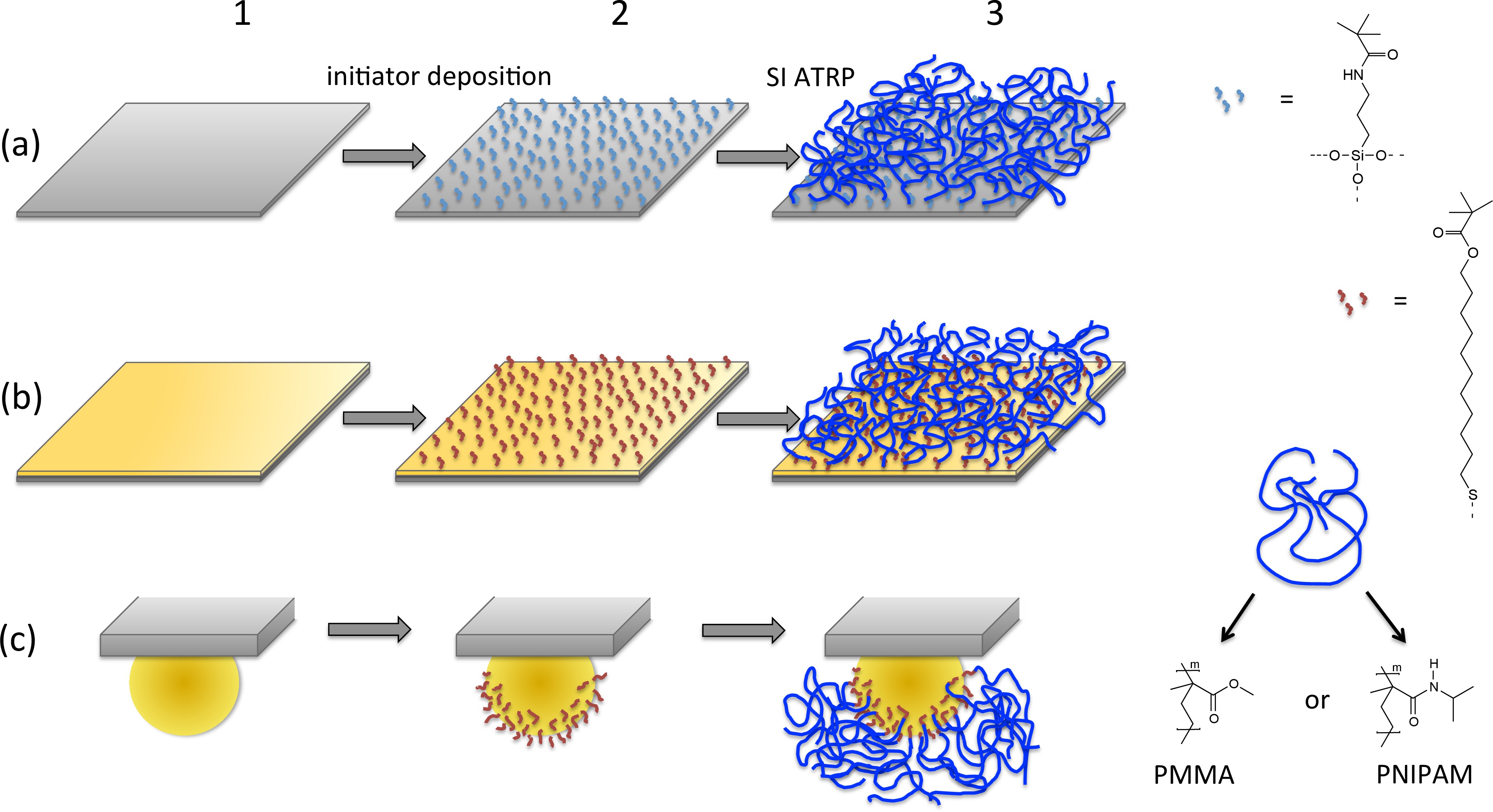 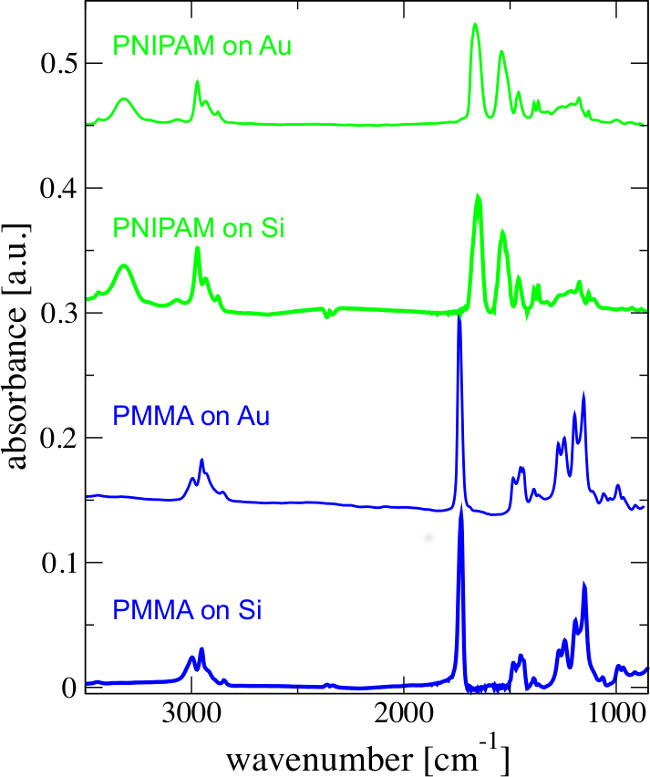 Figure 4. Averaged, filtered and smoothed force traces upon sliding the miscible (left) and immiscible (right) systems (adjusted from Ref. 22). The surface is moved back and forth by 40 μm at a scan-rate of 1 Hz and normal load of 30 nN.

The presented results show that the friction, for immiscible systems of individually solvated brushes, is strongly reduced compared to traditional miscible systems of two of the same solvated brushes. The preferred absorbance of the different solvents in the two brushes prevents the brushes from interdigitating and consequently a major source of wear and dissipation in polymer brush friction is eliminated. The presented method is therefore fundamentally different from sliding dry hydrophilic on hydrophobic brushes, where the friction will be determined by brush-specific interactions27. In fact, upon shearing PMMA on PNIPAM (collapsed height 166 nm) without solvents, we found that the friction was 50% higher compared to dry PMMA on PMMA (collapsed height 236 m).

As already pointed out shortly in the notes of the ‘Protocol’ section, there are a couple of crucial points that need to be kept in mind while performing these particular experiments: Firstly, acetophenone is a better solvent for PNIPAM than water. Thus, care should be taken that acetophenone does not enter the PNIPAM brush by wetting the PNIPAM brush with plenty of water. Since acetophenone and water do not mix, the acetophenone will now not enter the PNIPAM brush. That is why we did not immerse our system completely in acetophenone, but instead created an acetophenone capillary for the miscible system. Another reason for incomplete immersion is that complete immersion results in too strong hydrodynamics, such that we only measured the Stokes drag on the colloid and cantilever. Secondly, in AFM experiments the torsional and normal spring constants are coupled. Cantilevers with a low normal spring constant will also have a relatively low torsional spring constant and vice versa. This limits the lowest measurable friction coefficient to >10-3. Thus, in order to measure the full friction reduction, the friction for the miscible system needs to be high. This is achieved by using long high-density brushes and a relatively high shear velocity of typically 100 m/sec. Moreover, the capillary between the brushes also increases the friction forces. We measured the lowest friction coefficient, for an immiscible system22, of μ = 0.003 under an estimated normal stress of 200 kPa. Using the same experimental conditions, we found that μ = 0.15 for the miscible system.

Note that the experiments were performed in a controlled laboratory environment and that surfaces used in industry are not as ideal as used in the presented experiments. Most surfaces have a non-uniform roughness distribution28 and thus many asperities of different shapes and sizes. During the collision of two brush-bearing asperities, the friction is composed out of different dissipation channels29. Next to steady-state dissipation mechanisms, such as interdigitation and solvent flow, there will be hysteretic effects in the shape30 due to the slow relaxation time of the polymers and solvent. Besides, capillaries are formed and broken. In the traditionally used miscible brush systems, transient interdigitation31 amplifies shape- and capillary hysteresis. With the immiscible system presented here, transient interdigitation is eliminated too. Moreover, capillary hysteresis can be circumvented by application of two immiscible solvents. Therefore, also for the more common rough surfaces, friction and wear will be reduced using immiscible brush systems22. The main source of friction that remains is brush deformation. Anchoring polyzwitterionic polymers, which are known for their intrinsic low friction32, onto one of the surfaces can minimize the latter. In such systems the osmotic pressure of the solvent is high resulting in little brush deformation under high normal loads.

The presented method of immiscible brush systems can be applied in almost any system where low friction is desirable. The method functions well under high pressures. However, care should be taken that the temperature is kept around RT. High temperatures damage the polymers, which will cause liquid-flow out of the contact and consequently high friction. Examples of potential application are: syringes, piston systems, axle bearings and hinges.

We thank M. Hempenius and E. Benetti for fruitful discussions, Y. Yu for careful checking of the recipe, M. Vlot for the image design of Figure 1, C. Padberg and K. Smit for technical support. E.K. acknowledges the Netherlands Organization for Scientific Research (NWO, TOP Grant 700.56.322, Macromolecular Nanotechnology with Stimulus Responsive Polymers) for financial support. SdB has been supported by the Foundation for Fundamental research on Matter (FOM), which is financially supported by the Netherlands Organization for Scientific Research (NWO). 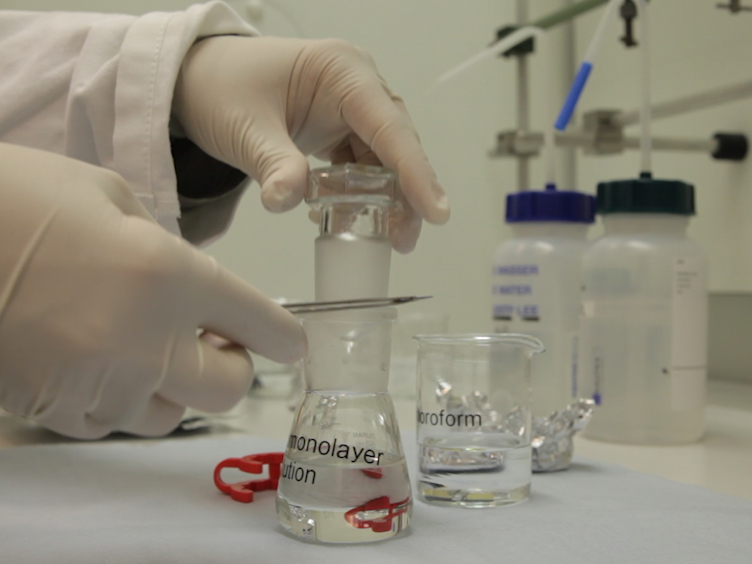