A method of fabricating organic photovoltaic (OPV) tandems that requires no vacuum processing is presented. These devices are comprised of two solution-processed polymeric cells connected in parallel by a transparent carbon nanotubes (CNT) interlayer. This structure includes improvements in fabrication techniques for tandem OPV devices. First the need for ambient-processed cathodes is considered. The CNT anode in the tandem device is tuned via ionic gating to become a common cathode. Ionic gating employs electric double layer charging to lower the work function of the CNT electrode. Secondly, the difficulty of sequentially stacking tandem layers by solution-processing is addressed. The devices are fabricated via solution and dry-lamination in ambient conditions with parallel processing steps. The method of fabricating the individual polymeric cells, the steps needed to laminate them together with a common CNT cathode, and then provide some representative results are described. These results demonstrate ionic gating of the CNT electrode to create a common cathode and addition of current and efficiency as a result of the lamination procedure.

Polymer semiconductors are the leading organic photovoltaic (OPV) materials due to high absorptivity, good transport properties, flexibility, and compatibility with temperature sensitive substrates. OPV device power conversion efficiencies, η, have jumped significantly in the past years, with single cell efficiencies as high as 9.1%1, making them an increasingly viable energy technology.

Despite the improvements in η, the thin optimal active layer thicknesses of the devices limit light absorption and hinder reliable fabrication. Additionally, the spectral width of light absorption of each polymer is limited compared to inorganic materials. Pairing polymers of differing spectral sensitivity bypasses these difficulties, making tandem architectures2 a necessary innovation.

Series tandem devices are the most common tandem architecture. In this design, an electron transport material, an optional metallic recombination layer, and a hole transport layer connect two independent photoactive layers called sub-cells. Linking sub-cells in a series configuration increases the open circuit voltage of the combination device. Some groups have had success with degenerately doped transport layers3–5, but more groups have used particles of gold or silver to aid recombination of holes and electrons in the interlayer6,7.

Previous efforts featured monolithic, parallel, tandem OPV devices with CNT sheets functioning as interlayer anodes8,9. These methods require special care to avoid shorting of one or both cells or damaging preceding layers when depositing later layers. The new method described in this paper eases fabrication by placing the CNT electrode on top of the polymeric active layers of two single cells, then laminating the two separate devices together as shown in Figure 1. This method is remarkable as the device, including an air-stable CNT cathode, can be fabricated entirely in ambient conditions employing only dry and solution processing.

CNT sheets are not intrinsically good cathodes, as they require n-type doping to decrease the work function in order to collect electrons from the photoactive region of a solar cell10. Electric double layer charging in an electrolyte, such as an ionic liquid, can be used to shift the work function of CNT electrodes11–14.

As described in a preceding paper15 and depicted in Figure 2, when the gate voltage (VGate) is increases, the work function of the CNT common electrode is decreased, creating electrode asymmetry. This prevents hole collection from the OPV’s donor in favor of collecting electrons from the OPV’s acceptor, and the devices turn ON, changing from inefficient photoresistor into photodiode15 behavior. It should also be noted that the energy used to charge the device and the power lost due to gate leakage currents is trivial compared to the power generated by the solar cell15. Ionic gating of CNT electrodes has a large effect on the work function due to the low density of states and the high surface area to volume ratio in CNT electrodes. Similar methods have been used to enhance a Schottky barrier at the interface of CNT with n-Si16.

NOTE: Use 15Ω/□ ITO glass, and purchase or cut the ITO glass into sizes suitable for spin coating and photolithography. It is most efficient to perform steps 1.1-1.7 on a piece of glass as large as possible, and then cut it into smaller devices. Also note that steps 1.1-1.7 require the ITO glass to be oriented with the ITO-side up. This can be checked easily with a multimeter’s resistance setting.

A tandem device formed from differing polymers, particularly polymers of significantly differing band gaps, is of practical interest as these devices can absorb the largest spectral range of light. In this device structure, the PTB7 sub-cell is the back cell and P3HT is the front sub-cell. This is intended to absorb the greatest amount of light as the P3HT sub-cell is largely transparent to the longer wavelength light absorbed by the PTB7 sub-cell. For the sake of clarity, the solar cell parameters, VOC, JSC, FF, and η will be decorated with a superscript T, F, or B when referring to the tandem, front or back cell respectively. Table 1 shows these abbreviations.

A selection of current voltage curves for the device are depicted in Figure 3, and extracted solar cell parameters in Figure 4. It is observed that the PTB7 sub-cell (back) turned ON at a much lower VGate than the P3HT sub-cell (front). Figure 4 shows that the PTB7 cell begins to turn ON at VGate = 0.5 V and peaks around VGate = 1.5 V. The front sub-cell shows signs of turning ON around VGate = 1.0 V, but does not fully turn ON below VGate = 2.0 V. VTOC and FFT mimic the behavior of the worse sub-cell, being slightly higher than the front sub-cell for VGate < 2.0 V and slightly higher than the back cell for VGate > 2.0 V. JTSC is far less than the sum of JFSC and JBSC for VGate < 1.5 V, after which point the current addition is quite good. ηT is less than the greater of ηF or ηB for all VGate except at 1.5 V.

The poor addition of current and efficiency for low VGate appears to be due to the front sub-cell acting as a shunt in its OFF state. This is seen from the highly linear curves of the front cell and the tandem at VGate = 1.5 V in Figure 3. Conversely, after the PTB7 back cell has degraded, (at VGate = 2.25 V), it still maintains a diode characteristics, as shown by the curve in Figure 3, and thus does not act as a shunt. This results in addition of JSC, but VTOC, FFT and ηT are reduced due to the low VBOC. While the process draws robustness from its simplicity, there are variations due to the manual processing and batch-to-batch variations in materials. This can result in shifts in turn on voltage of ±0.25 V and peak efficiency by ±0.5%. This variation can be decreased with a more automated process. 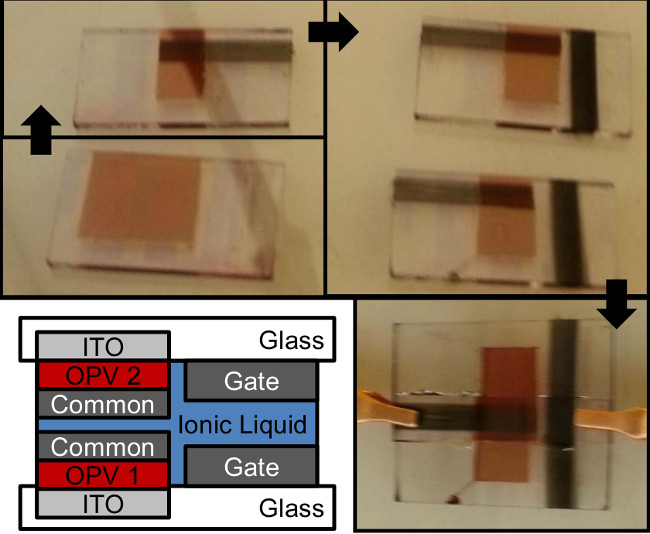 Figure 1. Tandem device design process. The fabrication and lamination process used in building the ionically-gated tandem OPV, with arrows depicting the sequence. A diagram of the final device structure is shown on the bottom left corner. Please click here to view a larger version of this figure. 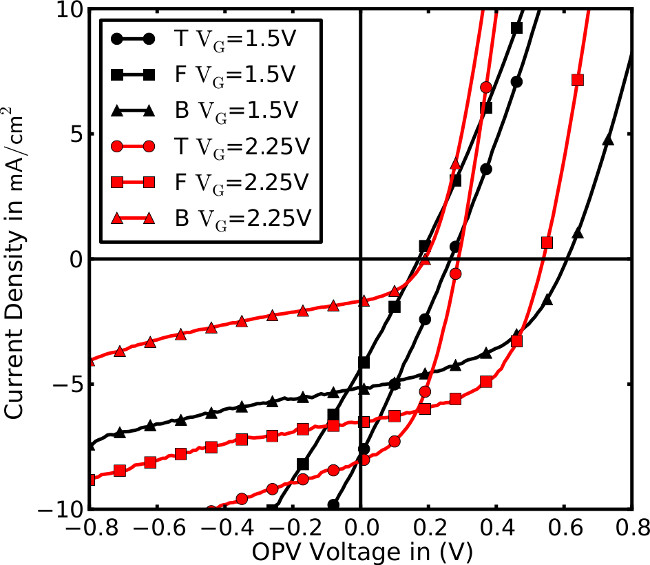 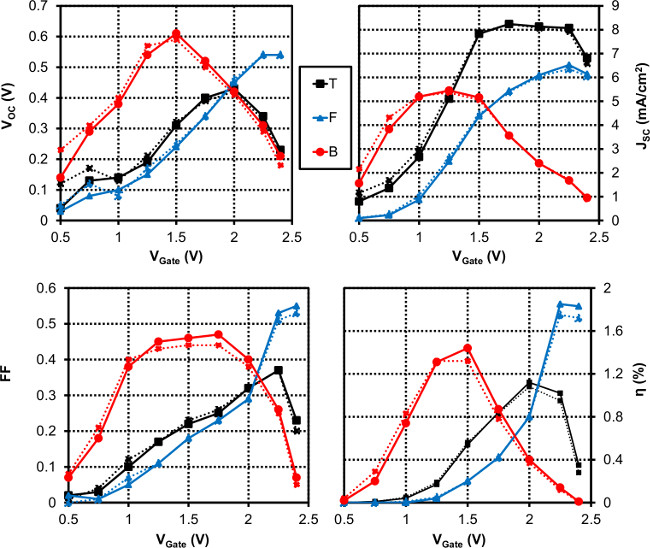 Figure 4. Device parameters. Solar cell parameters extracted from IV measurements from VGate = 0.5 V to VGate = 2.25 V. ‘T’ and black squares denote the tandem curve, ‘F’ and blue triangles the front, and ‘B’ and red circles the back. The dotted lines show results for descending voltages sweeps of the OPV device while the solid lines show the ascending results.

The results highlight a few considerations when designing parallel tandem solar cells. Notably, if one of the sub-cells is performing poorly, tandem performance in negatively affected. The results show that there are two main effects. If one sub-cell is shorted, e.g., shows ohmic behavior, the FFT will be no higher than the FF of the bad sub-cell. JTSC and VTOC will be similarly affected. This is the case when VGate is low and the P3HT sub-cell has not turned ON.

Conversely, if one sub-cell has good diode properties, but low VOC or JSC, then JTSC is nearly the sum of JFSC and JBSC. However, if there is a large difference between each sub-cell VOC, then VTOC is nearly equivalent to the lesser VOC. This performance is demonstrated when VGate is high and the PTB7 cell has turned off. The ηT can be somewhat higher in the case, but is still likely to be less than that of the better sub-cell alone.

Given the lower HOMO level of the PTB7 polymer, it is possible that suppression of hole injection/extraction occurs more rapidly in PTB7, and thus the device turns on at a lower VGate. Other effects to consider are the fact that PTB7 is a copolymer, which is a polymer composed of alternating donor and acceptor units. This might have an impact on the interface dipoles generated between the polymer and the CNT common electrode.

The procedure described in this text is applicable to applications which adhere to the following constraints. The semiconducting active material must not be soluble or adversely affected by the ionic materials. In the case of light emitting or photovoltaic devices, the anode and semiconducting layers should not be opaque in the same spectral regions. Given these constraints, it is possible to apply these techniques to organic light emitting diodes, organic field effect transistors, and similar inorganic devices.

In conclusion, a parallel tandem device fabrication method that possesses benefits over conventional processing methodologies is described. The method requires no vacuum processing, is scalable, can be performed in ambient conditions, and each active layer is fabricated in an optimal manner, reducing the incidence of shorts and simplifying processing. Salient features are identified in the operation of parallel OPV tandems. While the overall efficiencies are somewhat low, further improvements can be made by optimizing photoactive layers and CNT electrodes. Additionally, if sub-cell turned on at the same time, an ηT over 3% would be observed. 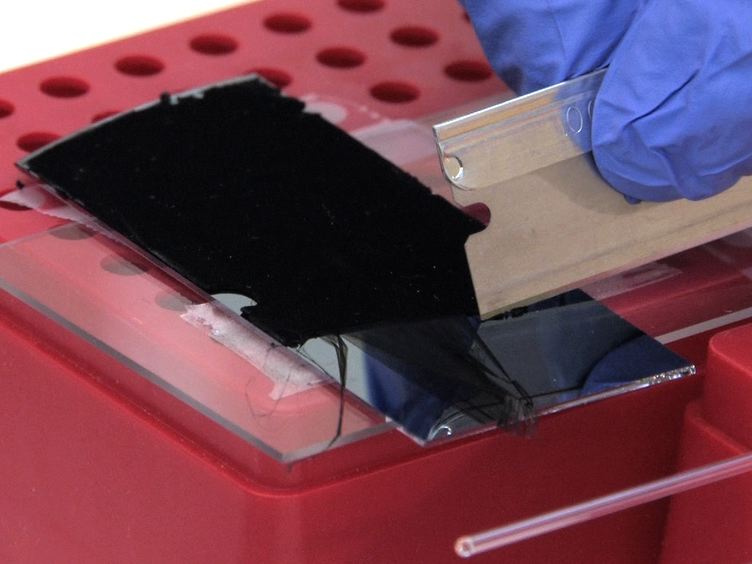