Basal and luminal cells comprise the majority of the prostate epithelium1. Lineage tracing studies have revealed that these cell types are predominantly self-sustained by distinct progenitors in the adult mouse2; however, luminal differentiation from basal progenitors has been observed in several contexts including development3,4, tissue regeneration5, inflammation6,7 and prostate cancer initiation2,8. Furthermore, emerging data supports the existence of multipotent luminal progenitors as well as luminal-committed progenitors9. In metastatic prostate cancer, differentiation from an AR-dependent luminal lineage to an AR-indifferent lineage with basal and neuroendocrine features represents an increasingly appreciated mechanism of resistance to androgen pathway inhibitors10,11,12. Therefore, as differentiation is implicated in normal physiology, cancer initiation and resistance to therapy, elucidating key molecular regulators of prostate epithelial cell differentiation is critical.

The mouse prostate organoid model has emerged as an elegant ex vivo context to study prostate epithelial cell differentiation9,13,14. In this assay, individual epithelial cells are plated into a 3D matrix where they generate glandular structures containing both basal and luminal cells within 1 week. While existing approaches for plating cells into organoid culture can be used to efficiently generate organoids, these approaches require further optimization14. Notable challenges associated with culturing prostate organoids include (1) excluding two-dimensional (2D) colonies that form beneath the Matrigel (matrix gel) from analysis, (2) maintaining the integrity of the matrix gel during media changes, and (3) counting organoids accurately. This paper outlines an approach to generate organoids from epithelial cells isolated from mouse prostate. The approach described entails coating plates with poly(2-hydroxyethyl methacrylate) (Poly-HEMA) to prevent the occurrence of 2D colonies. Furthermore, cells are plated into a matrix gel ring, rather than a matrix gel disc, which makes changing the media and counting organoids less challenging. These techniques allow researchers to more easily investigate how genetic alterations or small molecules introduced prior to, or during, organoid formation alter key processes such as differentiation.

Harvesting of prostate organoids for Western blot or immunohistochemical analysis by whole-mount confocal microscopy can provide valuable mechanistic insight into differentiation13, yet well-established protocols to prepare organoids for such techniques are lacking. This manuscript describes approaches to harvest organoids for (1) collection of protein lysate, or (2) fixation and staining for confocal microscopy. Importantly, the approach described for fixing and staining prostate organoids is considerably improved in relation to existing methods. While these rely on sectioning organoids15, the method described in this manuscript utilizes intact organoids, which helps protect against organoid damage during sample preparation. When used in combination, Western blot and confocal microscopy can provide valuable insight into the molecular regulators of differentiation. Alternatively, these approaches can be used to model other processes such as development and transformation.

All methods described here have been approved by the Institutional Review Board at the University of California, Los Angeles.

NOTE: A schematic illustrating the approaches described in the paper is provided in Figure 1.

NOTE: Plates are coated with Poly-HEMA to prevent 2D colony formation on the surface of the well beneath the matrix gel. Prepare Poly-HEMA-coated plates 1 day prior to plating sorted basal or luminal prostate epithelial cells into mouse organoid culture. Thaw 1 mL aliquots of reduced growth factor matrix gel, hereafter referred to as matrix gel, on ice 2 h prior to step 2.1. Y-27632 (ROCK inhibitor) should be added to mouse organoid media immediately prior to step 2.1. Perform steps 2.1-2.8 on ice.

NOTE: Existing media should be replaced with fresh media every 48 h. Before each media change, pre-warm mouse organoid media. It is not necessary to add ROCK inhibitor to the media used for replenishing.

Prostate epithelial cells are plated into mouse organoid culture where they form organoids, which are harvested prior to preparation for downstream analysis (Figure 1).

Basal and luminal epithelial cells are isolated using FACS. After excluding DAPI+ cells and depleting Lin+ cells (CD45, CD31, Ter119), basal and luminal cells are distinguished based on differential expression of EpCAM and CD49f (Figure 2). The approach described to plate prostate basal and luminal cells into organoid culture entails: (1) plating cells into matrix gel rings, and (2) coating wells with Poly-HEMA. Plating into rings has been previously described in Agarwal et al9. Utilizing this approach (Figure 3A) allows researchers to more easily avoid the matrix gel while replenishing the media (Step 3), and more easily count organoids by following the circumference of the well. Coating wells with Poly-HEMA has been shown to prevent 2D colony formation in retinal organoids17; however, this approach has not been utilized in the prostate organoid model. Importantly, coating wells with Poly-HEMA (Table 3) eliminates the occurrence of 2D colonies without interfering with organoid formation (Figure 3B). These modifications expand the capabilities of the prostate organoid assay. 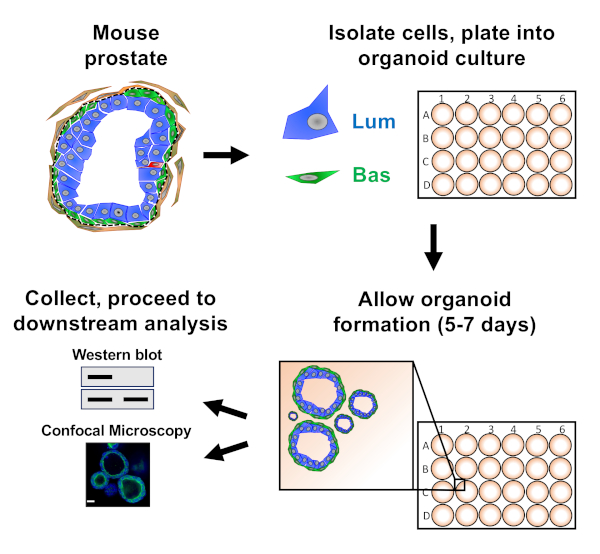 Figure 1: Schematic illustrating workflow to generate prostate organoids for collection and analysis. Total mouse prostate is dissociated and basal and luminal prostate epithelial cells are isolated by fluorescence-activated cell sorting via established protocols18,19. Basal or luminal cells suspended in a mixture of mouse organoid media and matrix gel are plated into matrix gel rings. After 5 to 7 days of culture, organoids are harvested for analysis by Western blot or confocal microscopy. Please click here to view a larger version of this figure. 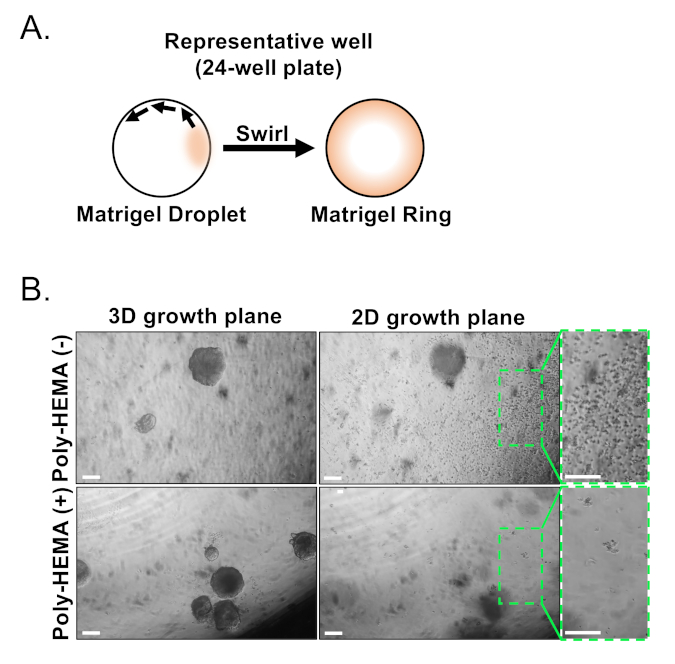 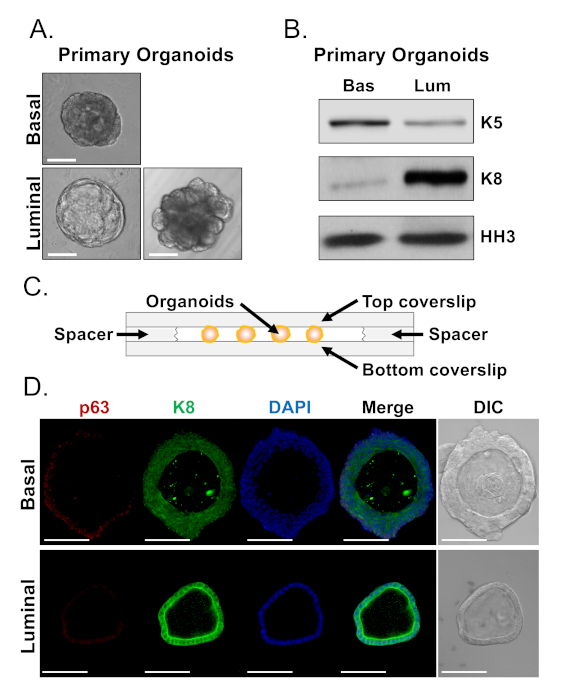 Table 1: Instructions for the preparation of key solutions.

Table 2: Instructions for the preparation of mouse organoid media.

The prostate organoid model represents an elegant ex vivo context where basal to luminal differentiation is reported to occur. Methods to establish prostate organoids are well established14; however, further optimization of these methods is necessary. Furthermore, approaches to harvest and prepare prostate organoids for analysis are not clearly described. This paper describes an approach to plate prostate epithelial cells isolated from mouse prostate into organoid culture. This approach allows researchers to (1) prevent the occurrence of 2D colonies during organoid formation, (2) reduce the risk of disruption to the matrix gel during media replenishment, and (3) count organoids more effectively. In addition, this manuscript outlines approaches to harvest organoids for preparation for Western blot analysis, or whole-mount confocal microscopy. Importantly, the approach utilized to prepare organoids for confocal microscopy maintains the intact structure of organoids through its duration, which reduces organoid damage prior to image acquisition. Altogether, the approaches described expand the capabilities of the prostate organoid assay.

Notably, the organoid-forming capacity of basal and luminal cells can be altered both by methods used to isolate the respective populations, and by culture conditions. The organoid culture conditions used in this assay were first described by Karthaus et al.13. Whereas Karthaus et al. have reported that basal cells have a higher organoid forming capacity (15%) than luminal cells (1%)13, Chua et al., using distinct isolation methods and culture conditions, have reported that luminal cells (0.2-0.3%) have a higher organoid-forming capacity than basal cells (0.03%)20. Overall, methods described by Karthaus et al. lead to higher organoid-forming rates for both basal and luminal cells, likely reflecting differences in the approach used to isolate basal and luminal cells13, as opposed to culture conditions that bias against organoid formation from luminal cells. It remains unclear whether the protocol described in this manuscript favors luminal organoid formation from multipotent luminal progenitors, or committed-luminal progenitors9. Though timely and cost-prohibitive, in vivo lineage tracing studies can be used to validate progenitor features associated with distinct prostate epithelial lineages elucidated in the organoid assay.

Processes such as development, differentiation and transformation are not only relevant to prostate biology, but also relevant to the biology of other tissues including the brain, lung, intestine, pancreas and liver. The methods described facilitate the utilization of the organoid model to study these processes in not only the prostate, but also a wide range of tissues. 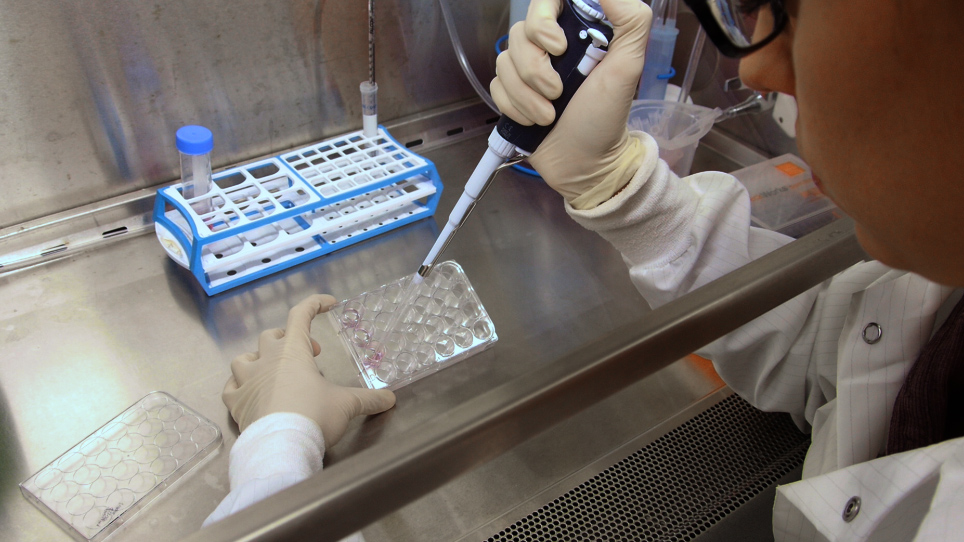