Here, we developed a novel multilayered modified strategy for liquid-like bioinks (gelatin methacryloyl with low viscosity) to prevent the sedimentation of encapsulated cells.

During the extrusion-based three-dimensional bioprinting process, liquid-like bioinks with low viscosity can protect cells from membrane damage induced by shear stress and improve the survival of the encapsulated cells. However, rapid gravity-driven cell sedimentation in the reservoir could lead to an inhomogeneous cell distribution in bioprinted structures and therefore hinder the application of liquid-like bioinks. Here, we developed a novel multilayered modified strategy for liquid-like bioinks (e.g., gelatin methacryloyl with low viscosity) to prevent the sedimentation of encapsulated cells. Multiple liquid interfaces were manipulated in the multilayered bioink to provide interfacial retention. Consequently, the cell sedimentation action going across adjacent layers in the multilayered system was retarded in the bioink reservoir. It was found that the interfacial retention was much higher than the sedimental pull of cells, demonstrating a critical role of the interfacial retention in preventing cell sedimentation and promoting a more homogeneous dispersion of cells in the multilayered bioink.

Three-dimensional (3D) bioprinting has been a promising method to manufacture complex architectural and functional replicas of native tissues in biofabrication and regenerative medicine1,2,3. The common strategies of bioprinting, including inkjet, extrusion, and stereolithography printing, have pros and cons from different perspectives4. Among these techniques, the extrusion procedure is most commonly used due to its cost-effectiveness. Bioink plays a key role in the process stability of extrusion bioprinting. The ideal cell-laden bioink should not only be biocompatible but also be suitable for mechanical properties5. Bioinks with low viscosity are typically presented as a liquid-like state. These bioinks can be easily and quickly deposited and avoid cell membrane damage induced by high shear stress during extrusion. However, in complex cases requiring long-term printing periods, low viscosity often gives rise to the inevitable sedimentation of the encapsulated cells in the bioink reservoir, which is usually driven by gravity and leads to an inhomogeneous cell dispersion in the bioink6,7. Consequently, a bioink with inhomogeneous cell dispersity hampers the in vitro bioprinting of a functional tissue construct.

Several recent studies focusing on bioinks have reported the promotion of homogenous dispersity of encapsulated cells. A modified alginate bioink based on dual-stage crosslinking was used for extrusion bioprinting8. An alginate polymer was modified with peptides and proteins in this study. Cells presented a more homogeneous distribution in this modified alginate than in the commonly used alginate due to the attachment sites provided by the peptides and the proteins. Alternatively, blended bioinks have been utilized to solve the sedimentation of cells in bioink. A blended bioink containing polyethylene glycol (PEG) and gelatin or gelatin methacryloyl (GelMA) with improved mechanical robustness was used in another study9. The encapsulated cells presented a homogeneous distribution mainly because the viscosity of the blended bioink was improved. In general, there are several factors influencing the dispersity of the encapsulated cells in the bioink, such as the viscosity of the bioink, the gravity of the cells, the density of the cells, and the duration of the working period. Among these factors, the gravity of cells plays a critical role in promoting sedimentation. The buoyancy and friction provided by the viscous bioink have been investigated as the main forces against gravity to date10.

Herein, we developed a novel strategy to promote homogeneous dispersity of the encapsulated cells in bioink by manipulating multiple liquid interfaces in the bioink reservoir. These liquid interfaces created by the multilayered modification of bioink can not only provide interfacial retention, which retards the sedimentation of cells, but also maintain a suitable biocompatibility and rheological behavior of the bioink. In practice, we modified aqueous GelMA solution (5%, w/v) with silk fibroin (SF) in a multilayered manner to longitudinally produce four interfaces, providing interfacial tensions in the blended bioink. As a result, the gravity loading on the cells was offset by the man-made interfacial tension, and a nearly homogeneous dispersion of the encapsulated cells in the bioink was obtained due to less sedimentation across the adjacent layers of cells. No similar protocol to slow down the sedimentation of encapsulated cells by manipulating interfacial retention in liquid bioinks has been reported to date. We present our protocol here to demonstrate a new way to solve cell sedimentation in bioprinting.

A schematic of the preparation of cell-laden bioinks is shown in Figure 1. After preparation of the different bioinks, loading, reheating and bioprinting were performed (Figure 2). To evaluate the distribution of the encapsulated cells in the bioink reservoir, a bioprinting procedure was performed using three different cell-laden bioinks in three 96-well plates (Figure 3A). Two control groups (pristine GelMA and SF-1-GelMA bioinks) and the experimental group (SF-M-Layered-GelMA bioink) were used to investigate the dispersity of the encapsulated cells (Figure 3B). Sixty microliters of cell-laden bioink was extruded in every well of the three 96-well plates. The total volume of the three kinds of bioink was 2 mL, and as a result, the period of bioprinting was more than 30 min. With the additional incubation prior to printing (30 min), the total working period was more than 1 h and was deemed a suitable fabrication duration for bioprinting large tissues and organs. The number of cells in the target wells, labeled in Figure 3A, in the three plates was counted. The counts of the cells in different wells could reflect the dispersity of the encapsulated cells among the different groups. The results showed that as the bioprinting procedure progressed, the density of cells in the target wells decreased in all groups. In the SF-0-GelMA group, approximately 70% of the cells were deposited in the bottom layer after the total procedure. In the SF-1-GelMA group, approximately 40% of the cells were deposited in the bottom layer, and approximately 5% of the cells were deposited in the top layer. In the SF-M-Layered-GelMA group, the deposition of encapsulated cells was more homogeneous than that of the control groups (Figure 3C and 3D). 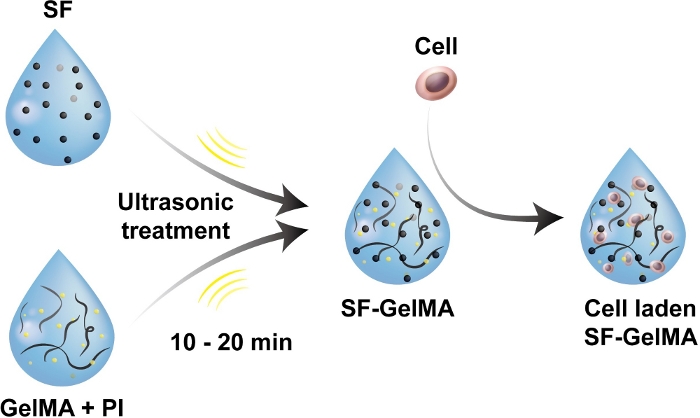 Figure 1: Schematic of the SF-GelMA bioink preparation. The SF-GelMA was prepared by mixing the silk fibroin (SF) and GelMA/photoinitiator (PI) complex followed by ultrasonic treatment for 10-20 min. Then, the target cells in the SF-GelMA mixture were suspended to prepare the cell laden SF-GelMA bioink. Please click here to view a larger version of this figure. 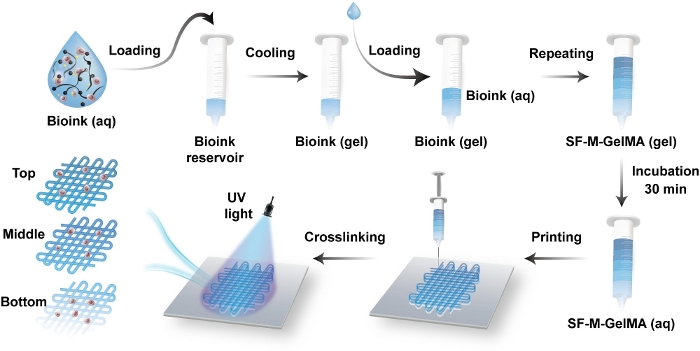 Figure 2: The loading, reheating, and bioprinting procedure. The cell laden SF-GelMA, as the bioink (aq), was loaded into the bioink reservoir and transformed into the gel state from the cooling procedure. The loading and cooling procedure was repeated 5 times using the bioinks (aq) with different concentrations of SF (0.5, 0.75, 1.0, 1.25, and 1.5%) to obtain SF-Multilayered-GelMA (SF-M-Layered-GelMA). The gel state SF-M-Layered-GelMA was reheated by placing the bioink in an incubator for 30 min. The gel state bioink turned into a liquid state after incubation. Then, the prepared bioink was used for printing using a 2 mL syringe as the bioink reservoir with a 27 G printing nozzle. The printed tissue construct was crosslinked by using UV light. Aq means aqueous solution. Please click here to view a larger version of this figure. 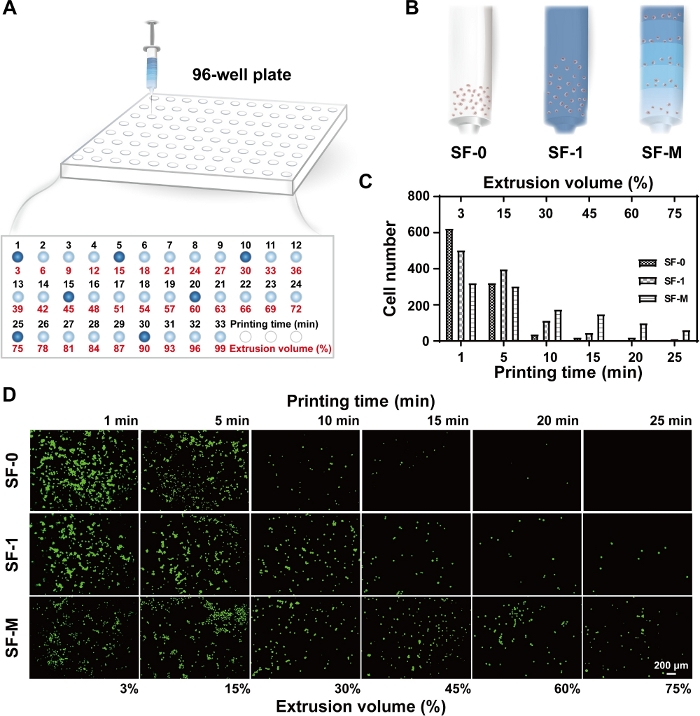 Figure 3: The bioprinting procedure used three different cell-laden bioinks. (A), Sixty microliters of bioink was extruded into the corresponding 96-well plate per minute, and it took more than 30 min to achieve the bioprinting procedure in the 96-well plate. (B), Three different kinds of bioinks were used to investigate the dispersity of the encapsulated cells in the bioprinting procedure: two control groups (pristine GelMA and SF-1-GelMA bioinks) and the experiment group (SF-M-Layered-GelMA bioink). (C-D), Cell densities of the No. 1, 5, 10, 15, 20, 25, and 30 wells in the three plates were detected with staining, showing the distribution of encapsulated cells in the three bioinks, and the deposition of the encapsulated cells in the SF-M-Layered-GelMA group was more homogeneous. Please click here to view a larger version of this figure.

where D is the diffusion coefficient, K is the consistency, T is the absolute temperature, η is the viscosity of the solution, and d is the diameter. It can be concluded that the difference in diffusion coefficient of SF molecules in water and in GelMA solution is determined by the difference in viscosity of these two surrounding solutions. Moreover, the diffusion radius can be calculated as follows:

where R is the diffusion radius, D is the diffusion coefficient, and T is the diffusion time. Pure water presents a viscosity at 8.9 x 10-4 Pa·s, and the viscosity of GelMA at zero shear rate in our study was higher than 1000 Pa·s. Hence, the diffusion radius of a single SF molecule at 25 °C is less than 0.66-1.18 μm/hour in the GelMA solution. This indicates that SF can hardly diffuse across the adjacent layers in the SF-M-Layered-GelMA system, which demonstrates the stability of the multilayered system. 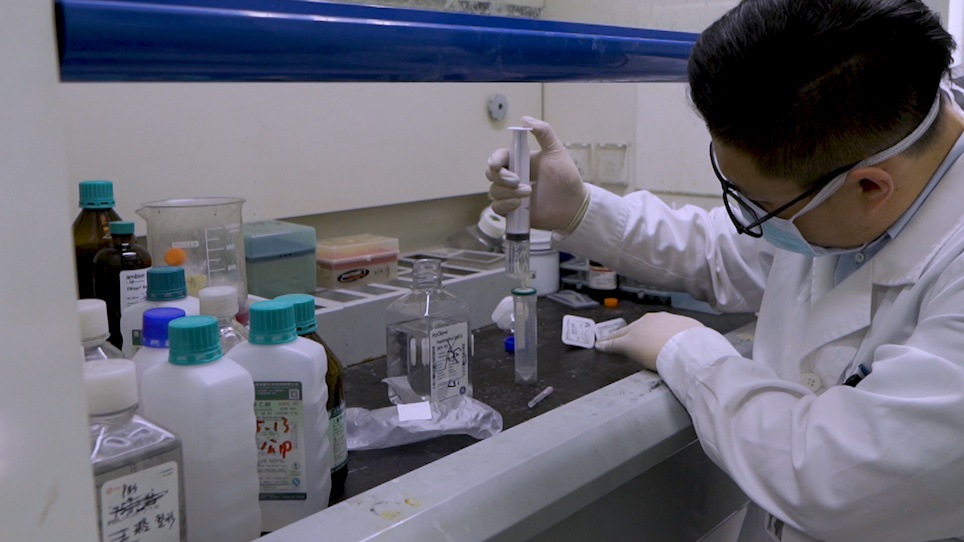