Mitochondrial DNA (mtDNA) defects are an important cause of disease and may underlie aging and aging-related alterations 1,2. The mitochondrial theory of aging suggests a role for mtDNA mutations, which can alter bioenergetics homeostasis and cellular function, in the aging process 3. A wealth of evidence has been compiled in support of this theory 1,4, an example being the mtDNA mutator mouse 5; however, the precise role of mtDNA damage in aging is not entirely understood 6,7.

Observing the activity of respiratory enzymes is a straightforward approach for investigating mitochondrial dysfunction. Complex IV, or cytochrome c oxidase (COX), is essential for mitochondrial function. The catalytic subunits of COX are encoded by mtDNA and are essential for assembly of the complex (Figure 1). Thus, proper synthesis and function are largely based on mtDNA integrity 2. Although other respiratory complexes could be investigated, Complexes IV and II are the most amenable to histochemical examination 8,9. Complex II, or succinate dehydrogenase (SDH), is entirely encoded by nuclear DNA (Figure 1), and its activity is typically not affected by impaired mtDNA, although an increase might indicate mitochondrial biogenesis 10-12. The impaired mtDNA observed in mitochondrial diseases, aging, and age-related diseases often leads to the presence of cells with low or absent COX activity 2,12-14. Although COX and SDH activities can be investigated individually, the sequential double-labeling method 15,16 has proved to be advantageous in locating cells with mitochondrial dysfunction 12,17-21.

Many of the optimal constitutions of the assay have been determined, such as substrate concentration, electron acceptors/donors, intermediate electron carriers, influence of pH, and reaction time 9,22,23. 3,3'-diaminobenzidine (DAB) is an effective and reliable electron donor 22. In cells with functioning COX, the brown indamine polymer product will localize in mitochondrial cristae and saturate cells 22. Those cells with dysfunctional COX will therefore not be saturated by the DAB product, allowing for the visualization of SDH activity by reduction of nitroblue tetrazolium (NBT), an electron acceptor, to a blue formazan end product 9,24. Cytochrome c and sodium succinate substrates are added to normalize endogenous levels between control and diseased/mutant tissues 9. Catalase is added as a precaution to avoid possible contaminating reactions from peroxidase activity 9,22. Phenazine methosulfate (PMS), an intermediate electron carrier, is used in conjunction with sodium azide, a respiratory chain inhibitor, to increase the formation of the final reaction products 9,25. Despite this information, some critical details affecting the result of this seemly straightforward assay, in addition to specificity controls and advances in the technique, have not yet been presented.

Examples of inappropriate COX/SDH double-labeling in brain sections from wild-type mice due to insufficient COX labeling are shown in Figure 4. Inadequate incubation time for the demonstration of COX activity, or reducing the availability of molecular oxygen by coverslipping the slide during incubation, resulted in a reduced deposition of the DAB reaction product, and thus allowed for formation of the blue formazan end product during the SDH incubation. 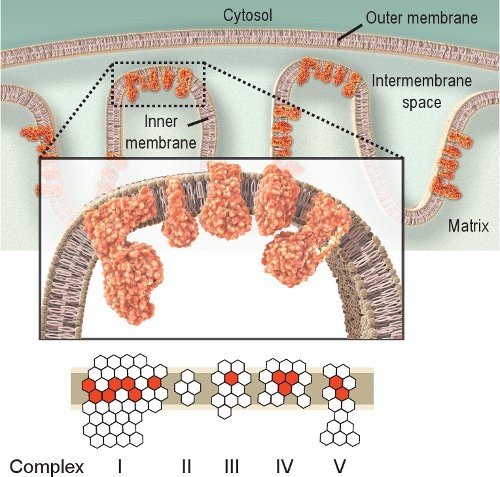 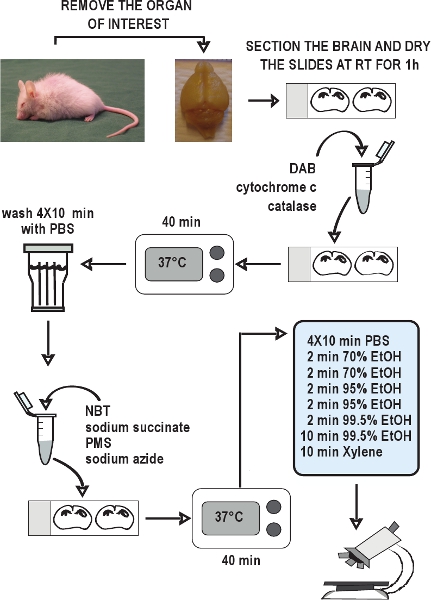 Figure 4. Examples of inappropriate COX/SDH double-labeling. Brain sections from wild-type mice were sequentially labeled for COX and SDH activities. (Scale bar: 200 μm.) Inadequate incubation times (10 and 25 minutes) for the demonstration of COX activity resulted in a reduced deposition of the brown DAB reaction product, compared to the 40-minute incubation time (left and center). The shortened incubation times allowed for the formation of the blue formazan end product during the SDH incubation, misleadingly suggesting the presence of cells with COX deficiencies. Coverslipping the slides during the COX incubation also resulted in inaccurate formation and deposition of the DAB reaction product (right).

The combined COX/SDH histochemical method enables the visualization of cells with mitochondrial dysfunction. This technique, with early studies dating back to 1968, remains popular, with many considering it the "gold standard" for identifying mitochondrial diseases in patients14,19,26,27. It is now frequently used to investigate mtDNA mutation-driven aging and aging-related disorders 12,13,18,20,21,24. The COX/SDH double-labeling method is often used in parallel with other techniques to identify specific mtDNA mutations and to further investigate the mitochondrial respiratory enzymes, such as oximetric measurements and spectrophotometric enzyme analysis 28,29.

In spite of its long-standing use, important details, simple specificity controls, and advances to improve the method have not yet been presented. In regards to handling of the tissue, it is important to use fresh-frozen tissue with this technique, because although COX will survive the formalin fixation, SDH will not. Although this is a limitation of the technique, no post-mortem delay has been found to interfere with this method 24, but it is suggested to quickly remove the organs of interest to preserve morphology. However, continuous freeze-thaw cycles of the tissues and sections should be avoided. Tissue samples may be frozen on dry ice; however, some tissues may require freezing in isopentane or propane cooled with liquid nitrogen to obtain optimal morphology and to avoid freezing artifacts. The appropriate thickness of the cryostat sections, depending on tissue-type, should also be determined. It is recommended to collect between 8 - 14-μm sections, thin enough for penetration of the solutions but thick enough to preserve anatomical features after dehydration. The suggested cryostat temperature of -21 °C may need to be adjusted ± 1-2 °C. If the specimen is too cold, the section may curl, if it is too warm, the section may stick to the knife. With regard to handling of the slides, the use of a grease pen, which is often beneficial in keeping the incubation medium on the slide, should be avoided. Instead, use 150- 200 μl of incubation medium per slide, depending on the number of sections. The use of a coverslip during incubation should also be avoided until the slide is ready to be mounted, because molecular oxygen must be present during the COX labeling step (Figure 4). Lastly, it is suggested to use the commercially available DAB solution (e.g. Sigma), a safer alternative to preparing DAB solution from the crystalline solid. DAB solution can also be made from available tablets, but inconsistent COX labeling results were found when this tablet-based DAB solution was used.

To obtain consistent and reliable results from this biochemical assay, the following points are recommended. Use freshly prepared PBS and ethanol in each experiment. Prepare stock solutions of cytochrome c, NBT, PMS (shield from light), sodium succinate, sodium azide, and malonate in 0.1 M PBS pH=7.0, adjusting the pH to 7.0 with 0.1 M HCl or 0.1 M NaOH. Aliquot and store the stock solutions at -20 °C, and rapidly thaw the solutions just prior to use. To obtain consistent results in each experiment, it is recommended to process a maximum of ten slides per experiment to minimize time delays. There is some variability between experiments; therefore, sections from each subject/animal should be repeated at least three-to-four times, and appropriate controls should be used in each experiment. Lastly, as the incubation times do influence the amount of COX-labeling (Figure 4, left and middle panels) and SDH-labeling, it is not recommended to vary the incubation times by more than 5% (2 mins).

The combined COX/SDH protocol presented here is based on principles previously described 9,22,23,25. As with many technqiues, variations of this protocol, such as excluding the addition of PMS and sodium azide, using an aqueous mountant, and varying incubation and rinse times, do exist and may work equally as well.