We demonstrate a method to determine successful or failed fertilization on the basis of sperm nuclear morphology in Arabidopsis double fertilization using an epifluorescence microscope.

Flowering plants produce seeds through double fertilization, a process that is directly controlled by interactions between proteins localized on gamete plasma membrane1,2. Flowering plant male gametes, a pair of sperm cells, develop in pollen. A pollen tube that grows after pollination delivers a pair of sperm cells to female gametes, an egg cell and a central cell, which develop in an embryo sac. After the male and female gametes meet, proteins on the gamete surface promote recognition, attachment, and fusion to complete double fertilization. In previous studies, the male gamete membrane proteins GENERATIVE CELL SPECIFIC 1 (GCS1)/HAPLESS2 (HAP2)3,4 and GAMETE EXPRESSED 2 (GEX2)5 were identified as fertilization regulators involved in gamete fusion and attachment, respectively. We recently identified a male gamete-specific membrane protein, DUF679 DOMAIN MEMBRANE PROTEIN 9 (DMP9), as a fertilization regulator involved in gamete interaction. We found that a decrease of DMP9 expression results in significant inhibition of egg cell fertilization during double fertilization in A. thaliana6.

NOTE: Before starting the process, a pair of No. 5 forceps is required.

2. Preparation of Ovule for Observation

NOTE: The following items are required: a slide glass with double-sided tape attached, No. 5 forceps, a 27 G injection needle, and a dissecting microscope.

NOTE: In this protocol, we used an epifluorescence microscope equipped with a fluorescence filter cube (see Table of Materials), a digital camera, and the accompanying software.

Ovules from a pistil pollinated with DMP9KD/HTR10-mRFP were collected at 7-8 HAP and observed.

Figure 1: Flower buds suitable for emasculation. (A) A flower bud at stage 11, showing bits of the petals at the top. (B-D) A flower bud in which was removed the sepals (B) and petals (C) and that was then emasculated completely (D). The anther dehiscence has not occurred yet. Scale bar = 1 mm. Please click here to view a larger version of this figure. 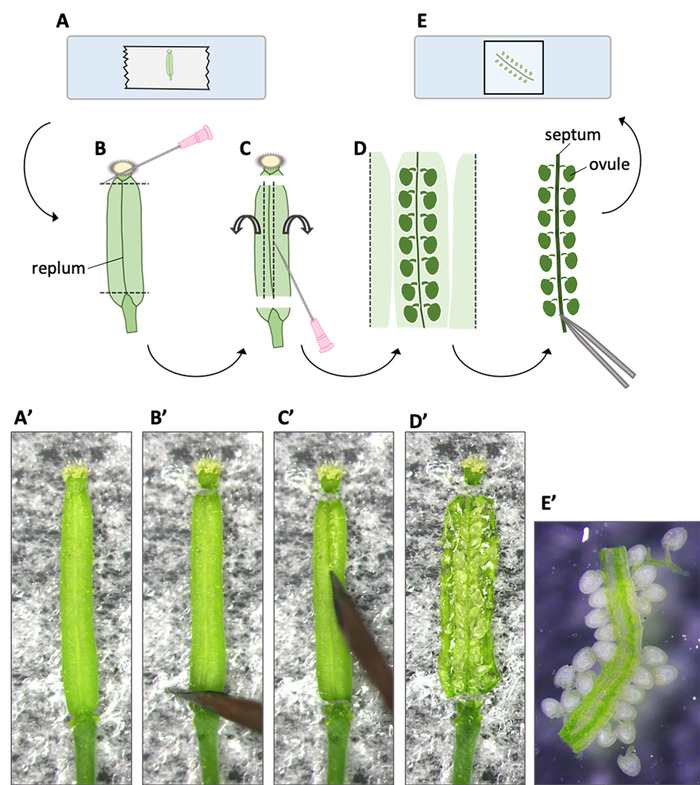 Figure 2: Flow of ovule sample preparation. The procedures are shown by illustrations (A-E) and photographs (A’-E’). (A, A’) A pistil is placed on double-sided tape attached to a slide glass, and its upper and lower ends are cut off with an injection needle. (B, B’) The ovary wall is incised along both sides of the replum. (C, C’) Both sides of the ovary walls are opened, everted, and pressed onto the tape for fixing. (D, D’) The septum where ovules are connected in arrays is exposed. (E, E’) One end of the septum is pinched and lifted up with forceps. The septum with connecting ovules is transferred to a drop of water on a slide glass. Please click here to view a larger version of this figure. 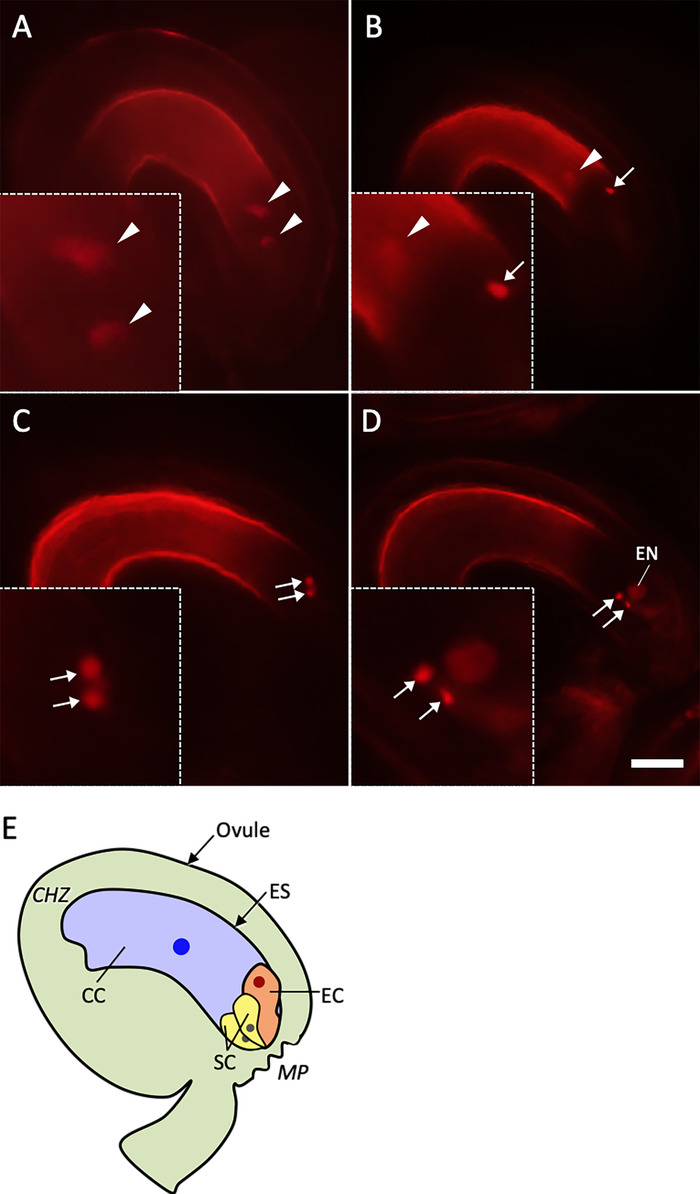 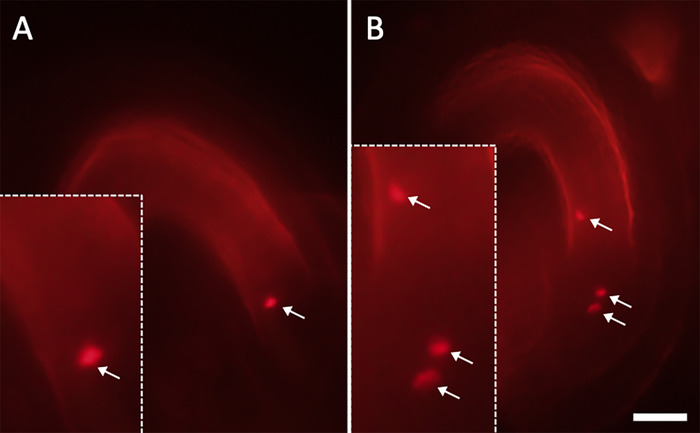 Supplementary Figure 1: Condensed sperm nuclei at plasmogamy during fertilization, judged by combination with a female plasma membrane marker line. pFWA::GFP-PIP where the central cell plasma membrane is visualized was used as female parent (GFP). GFP-PIP also labels endo membranes12. The ovule contains two condensed mRFP-labeled sperm nuclei (arrows; RFP). The RFP signal at charazal end side (arrow) is shown in the central cell (Merge), indicating that the sperm nucleus is in plasmogamy (after gamete membrane fusion, but before karyogamy). The panel on the right is a magnification of the area surrounded by dashed lines in the merged image. A blank area marked by an asterisk corresponds to the position of the central cell nucleus. The dashed line indicates the outline of the central cell facing the egg cell. Scale bar = 20 μm. Please click here to download this file.

HTR10-mRFP labels paternal chromatin (i.e., visualizes sperm cell nuclei), and the dynamics in double fertilization have been reported7. Immediately after release from a pollen tube, HTR10-mRFP-labeled sperm nuclei are still condensed. However, each of the sperm nuclei is decondensed upon merging with a fertilized female gamete nucleus at karyogamy three to four hours after gamete membrane fusion7. Unfertilized sperm cells remain condensed, as shown in an embryo sac in which gcs1 sperm cells are arrested without fertilization (Figure 3D). Usually, when the fertile HTR10-mRFP is used as the pollen parent, 57.9% ± 17.8% (mean ± s.d.; n = 16 pistils) of ovules in a pistil at 7-8 HAP contain two mRFP-labeled sperm nuclei signals, and almost all of the signals (97.2%) are decondensed, reflecting successful double fertilization (a similar signal pattern is shown in Figure 3A). In the case of DMP9KD/HTR10-mRFP, ovules containing two mRFP-labeled sperm nuclei were observed at a similar frequency to that of HTR10-mRFP, but 17.6% of them showed single fertilization6. We adopted the HTR10-mRFP dynamics for observation of a large number of ovules under in vivo conditions using an epifluorescence microscope. The protocol is simple and quick, which enables the collection of sufficient data for statistical proof. Using this protocol as the first instance, the significance of single fertilization of the central cell by DMP9KD/HTR10-mRFP sperm cells was proved6.

Other potential causes of phenotypes (2) and (3) should be considered. It has been reported that sperm cells respectively begin plasmogamy with an egg cell or central cell several minutes after being released into an embryo sac under semi-in vitro culture conditions11. In addition, a time lag of a few minutes exists between the first and second fertilizations, although there is no preference for the order of fertilization of the egg cell and the central cell11. Therefore, a pair of condensed and decondensed sperm nuclei in phenotype (2) might indicate a time lag between the fertilizations instead of single fertilization. In order to confirm the occurrence of single fertilization at a significant frequency in phenotype (2), a number of samples sufficient for statistical analysis should be examined. Phenotype (3), which has two condensed sperm nuclei (Figure 3C), could reflect a period of immobility of sperm cells prior to plasma membrane fusion12 or the period between plasmogamy and karyogamy. Therefore, two condensed sperm nuclei at 7-8 HAP do not fully reflect 'failure' of double fertilization, and it is necessary to observe the ovules at a later time after pollination to assess the success or failure of double fertilization. In this regard, ovule observation at 16-18 HAP is recommended, because most of the ovules would have completed double fertilization with sperm cells delivered by the first pollen tube, and HTR10-mRFP signals of unfertilized sperm nuclei would remain until the next day of pollination, as shown in Figure 3D.

A pattern of single condensed HTR10-mRFP-labeled sperm nucleus (Figure 4A) was rarely detected, which was likely due to the quick disappearance of another paternal HTR10-mRFP signal in the fertilized female gamete as a result of single fertilization. In this analysis, three or more HTR10-mRFP-labeled sperm nuclei were also detected as a rare case (Figure 4B), due to second pollen tube acceptance by the fertilization recovery system10. In this protocol, these cases were excluded from the data, because tracing the behaviors of two sperm cells derived from one pollen tube is critical for accurate assessment.

Since the polarity for the positions of the female gametes in an embryo sac is well regulated (i.e., the egg cell and the central cell differentiate at the micropylar and the chalazal side, respectively), which female gamete is fertilizing can be judged by the relative positions of the mRFP-labeled sperm nuclei. However, there is a limitation in distinguishing between unfertilized and plasmogamy states, because both states are indicated by the condensed sperm nuclei signal. To evaluate precisely whether plasmogamy after gamete membrane fusion has occurred or not when the sperm nuclei are condensed, it is required to use female gamete membrane marker lines, as reported by Takahashi et al. (2018)6. For example, when a pFWA::GFP-PIP plant12 in which the central cell plasma membrane was visualized was used as a female parent, it is clear that a sperm cell fused with the central cell was in plasmogamy (Supplementary Figure 1).

In summary, our protocol described here can be used for statistical assessment of success or failure of fertilization in each female gamete. Although the employment of the female plasma membrane marker is required to judge the plasmogamy, our method is useful for functional analysis of the fertilization regulator.

This work was supported by Japan Society for the Promotion of Science KAKENHI grant (JP17H05832 to T. I.) and by funding from the Strategic Priority Research Promotion Program on Phytochemical Plant Molecular Sciences, Chiba University (Japan).