18.1: What is a Nervous System?
TABLE OF
CONTENTS
X

Chapter 36: Plant Responses to the Environment 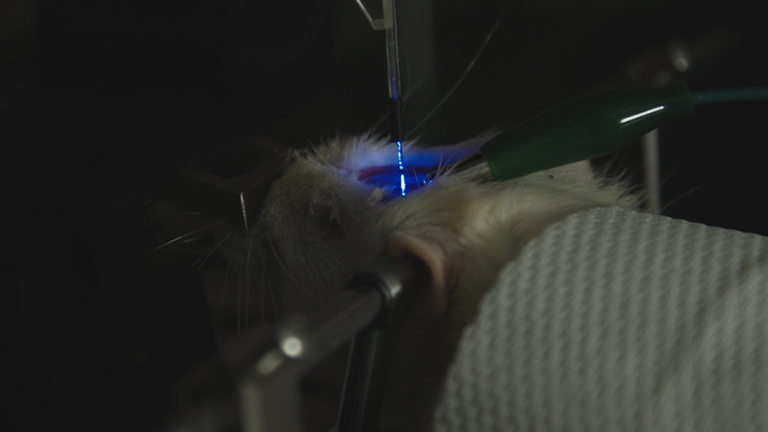 The nervous system allows a person to detect the outside world and make appropriate responses to it. Additionally, it controls functions ranging from breathing to advanced reasoning.

This system is divided into two parts, the central nervous system or CNS which contains the brain and spinal cord, and the peripheral nervous system, the PNS, which includes the nerves that travel between the CNS and the rest of the body.

The brain is subdivided into areas that have different functions such as processing visual information or coordinating movements, but it is also highly interconnected, allowing for integration of information.

Like the rest of the nervous system, the brain is composed of neurons, cells that generate and transmit neural signals, and glia, cells that support neural functioning.

Below the brain lies the spinal cord, CNS tissue that extends down the vertebral canal. It facilitates signaling between the brain and PNS and also controls some basic functions such as reflexes.

In the PNS, nerves, bundles of neuronal axons, transmit instructions out to skeletal muscles to control movement and to internal organs to regulate autonomic functions such as digestion. Nerves also carry sensory information from receptor cells such as those in the skin that detect touch to the CNS for analysis.

The nervous system is the collection of specialized cells responsible for maintaining an organism’s internal environment and coordinating the interaction of an organism with the external world—from the control of essential functions such as heart rate and breathing to the movement needed to escape danger.

Parts of the Nervous System

The vertebrate brain is primarily divided into the cerebrum, cerebellum, and brainstem. The cerebrum is the largest, most anterior part of the brain that is divided into left and right hemispheres. Each hemisphere is further divided into four lobes: frontal, parietal, occipital, and temporal. The outermost layer of the cerebrum is called the cortex which is involved in processing complex sensory information and most cognitive functions. Deeper inside the brain lie other critical components, including the hippocampus, hypothalamus, thalamus, and basal ganglia. The cerebellum (the “little brain”) is located posterior and below the cerebrum and is responsible for coordinating muscle movement. The brainstem connects the brain to the spinal cord and has important centers for vital functions such as breathing and swallowing.

The spinal cord lies below the brain and is continuous with the brainstem. It contains neuronal cell bodies and bundles of axons that connect the brain and different parts of the body. Besides being a critical conduit of information, the spinal cord can carry out some functions without input from the brain, such as locomotion and other reflexes. The nerves of the PNS carry motor commands from the CNS out to muscles, and sensory information from receptor cells to the CNS for interpretation. Besides the movement of skeletal muscles, nerves regulate the activity of internal organs such as the lungs and intestines through the sympathetic and parasympathetic divisions of the autonomic nervous system.

Cells of the Nervous System

Two main cell types make up the nervous system: neurons and glial cells. Neurons are the heavy-hitters in the CNS—they are responsible for communicating with each other and carrying information back and forth from the nervous system to the rest of the body. It is estimated that the human brain contains around 100 billion neurons and a staggering 100 trillion connections between them. They come in many different morphologies and perform a wide range of functions. Neurons use an array of neurochemicals and ions to communicate at junctions called synapses.

The other main type of cells of the nervous system is part of a group called glial cells. They include a diverse group of cells that contribute to the function of neurons and roughly equal the number of neurons in the brain. The main types of glial cells include astrocytes, microglia, oligodendrocytes, and ependymal cells in the CNS; Schwann cells and satellite cells are found in the PNS.

Mental Health Is a Global Concern

The nervous system governs virtually every experience we have, and its disruption due to trauma, disease, genetics, or exposure to harmful chemicals can have severe impacts on health and quality of life. The mental health conditions that stem from such effects are remarkably common across the world. Increasing our understanding of neurological and neurodevelopmental disorders continues to provide potential treatments and therapeutics to many who suffer from mental health conditions. The World Health Organization (W.H.O.) and the National Institutes of Mental Health (N.I.M.H) in the U.S., among other organizations, provide valuable resources to both study these conditions and track their impact on society.