Human memory seems to work in two broad ways. Like modern computers, the human mind has explicit, or declarative, memory: ask a question, and a person gives the best answer they can. Input a query, and a computer program returns the contents of the relevant parts of its stored memory.

Humans also have a second kind of memory system, one not really typical of computers, one that experimental psychologists call implicit.

Implicit memory is a broad term that refers to the many ways past experiences influence present behavior. Pavlov’s famous dogs, for example, learned to associate the sound of a bell with mealtime. Eventually, they began salivating whenever they heard a bell, even if food was not delivered.

Humans also possess implicit memory. Implicit memories, for example, are the reason it can be difficult to fall asleep in a new place; people associate their bedroom environment and their nighttime routines with sleepiness.

The use of a verbal priming technique allows for investigation into the nature of implicit memory.

Implicit memory refers to the unconscious impact that past experiences have on human behavior.

Let's elaborate. If a person regularly sleeps in specific environment, he might feel sleepy if placed in new environment with similar surroundings.

The objects from the sleeping environment prime the individual to respond in a similar manner, even though that person may not remember specific objects in the room.

Through the use of a verbal priming paradigm, this video demonstrates how to design the stimuli and perform the experiment, as well as how to analyze and interpret data investigating implicit memory.

This experiment includes two short phases: an Exposure Phase and a Test Phase. During the Exposure Phase, participants are briefly shown single words from a list, called Prime Words, and asked to identify whether or not the word is found indoors or outdoors.

This first phase is a clever cover task that exposes, or primes, individuals to words that should be unknowingly encoded into memory.

During the second Test Phase, words from the Prime list are intermixed with new words, as well as with words in which the letters have been reordered to produce strings of non-words. Participants are asked to make judgments about whether letter strings are English words or not.

In this experiment, the dependent variable is reaction time, or how much time elapses from the appearance of each word on the screen to when the participant makes an accurate response.

Such performance implies faster access to already stored mental representations. In other words, the primed words are encoded into implicit memories compared to novel non-words.

To conduct this study, prepare stimuli by generating a list of 30 common English nouns. Randomly divide these words into three equal groups: Prime Words, New Words, and Words for Scrambling.

From the Words for Scrambling group, create a novel list of 10 non-words by randomly reordering the letters in each word to produce strings that are not English words.

After preparing the word groups, have the participant sit at the computer. Discuss the overall purpose of the study to the participant. Explain to him or her to watch for words centered on the computer screen and respond by making key presses.

Immediately after the Exposure phase, initiate the second part, the Test Phase.

In this case, randomly present the Prime Words, New Words, and Scrambled letters intermixed across the 30 trials. Instruct the participant to quickly and accurately press the 'M' key if the letter string during the trial is a word or the 'Z' key if the string is not an English word.

During the Test Phase, record response accuracy and reaction time.

To analyze how priming influenced the participant's performance, average the reaction times for all of the correct responses across the three groups: Prime Words, New Words, and Non-Words.

By graphing the average times by word group, notice that participants responded faster when they were presented with Prime Words compared to New Words, and the slowest when responding to Non-Words.

Now that you are familiar with setting up a verbal priming task, let's take a look at how other researchers use the technique to investigate the neural underpinnings of implicit memory processes.

One of the most famous cases involves patient E.P., who suffered neural damage caused by the herpes encephalitis virus. In this case, the virus entered the brain and caused extensive damage to his medial temporal lobe.

When E.P. was tested on a verbal priming task, he showed faster responses to Prime words, just like control participants.

The finding reinforced the theory that memories can be dissociated into different sub-types. The damage caused anterograde amnesia for declarative memories but left implicit memories intact.

Researchers examine whether or not prior exposure to stimuli influences subsequent behavior and neural activity. This approach is valuable to understand conditions where priming is compromised, such as after the administration of certain drugs or traumatic events.

You've just watched JoVE's introduction to Verbal Priming. Now you should have a good understanding of how to design and perform the experiment, as well as analyze results and apply the phenomenon.

In general, people take a relatively long time to judge letter strings as non-words. So responses to non-words are longer on average than responses to words.

The crucial result, however, is in the comparison between “New Words” and “Prime Words”: people respond more quickly, on average, to “Prime Words.”

Recall that the “Prime Words” were the ones that appeared in the “Exposure” phase. But the participant was not asked to remember those words at that point, only to judge them as likely to be found indoors or outdoors. In the “Test” phase, participants were not asked if they had seen any of the words before, only whether a string constituted an English word or not. Why would responses to the “Prime Words” be faster than responses to the “New Words” then? When shown incidentally during the “Exposure” phase, those words became encoded into implicit memory. Their mental representations were primed. And so when a word/non-word judgment needed to be made, the participant had faster access to those words, speeding up their responses. 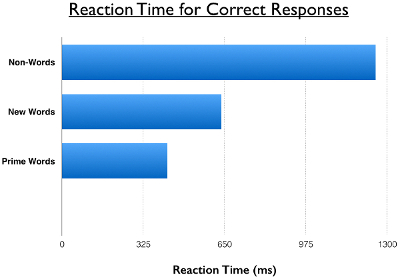 Figure 5: Reaction time for correct responses. The participant responded to “Prime Words”—words that appeared in the “Exposure” phase—more quickly than they did to “New Words.”

One place in which implicit memory and priming have long drawn interest is in marketing and advertising. Why do companies like Coca-Cola or McDonalds advertise all the time? Hasn’t everyone heard of them by now? One reason is that they want to prime the public’s memory, to have their brands on people’s minds without people necessarily knowing it. From their perspective, the advertising is worth it if the target audience and their products cross paths coincidentally and priming pushes the audience’s behavior in their direction.

By automatically forming associations to what a person already knows, priming is also thought to play an important role in the ability to comprehend new information and subjects. It is therefore important for researchers to investigate conditions that may impair priming and reduce aptitude. For example, recent research suggests weakened verbal priming as a result of drug abuse, a fact that may account for some of the known cognitive impairments drug use can cause.

Implicit memory is important in trauma and post-traumatic stress. Objects, sounds, and smells in the environment during a traumatic experience can become triggers for stress, anxiety, and even delusion through implicit association with the traumatic experience.

Finally, implicit memory, and priming, in particular, has been an area of interest in studies of memory loss in disorders such as Alzheimer’s. Many types of brain damage seem to impair explicit memory, but not implicit memory. One of the most famous examples of this comes from a patient known as E.P. E.P. suffered from herpes encephalitis, a condition in which the herpes virus enters the brain and causes extensive neural damage. E.P.’s disease destroyed a considerable amount of his medial temporal lobe, an area known to be crucial for the formation of new memories. In E.P, this produced severe anterograde amnesia. However, in a surprising experiment, researchers could show that implicit memory remained intact. When asked explicitly whether he had seen one of the exposure words, E.P. could not remember. Yet he showed faster responses to those words in the priming task, just like control participants. 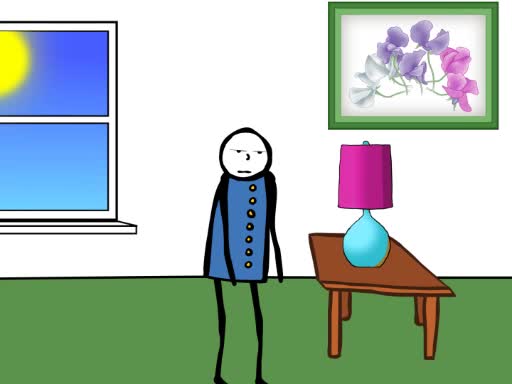