In perception, it is often the case that the ability to recognize and interpret complex stimuli feels effortless but actually demands complicated and intensive processing. This is because processing is specialized and automated for certain types of very important stimuli. Among the best examples of this phenomenon is face processing. People do not try to detect and recognize faces. It just seems to happen. However, detecting faces and telling them apart from one another is actually a demanding computational task. 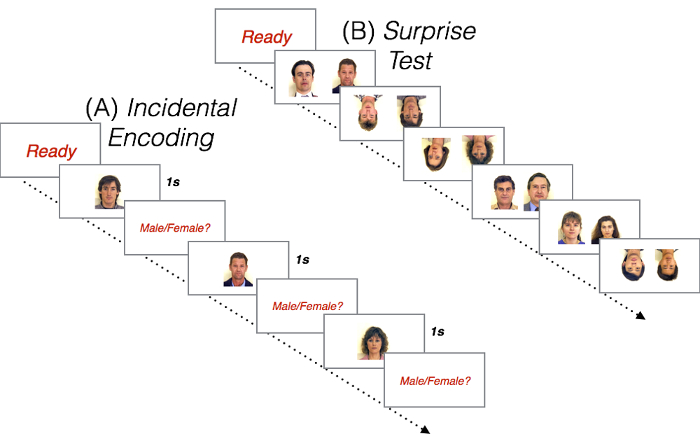 Figure 1. Methods for an incidental encoding memory paradigm designed to demonstrate the inverted face effect. The experiment has two parts. In the first part, called the incidental-encoding phase, participants observe a set of 40 faces, one by one, and are asked to simply report whether each face is male or female. In the second phase, the participant is given a surprise memory test. In each trial, two faces are shown side-by-side. One of each pair is one of the faces shown in the encoding phase, and the other, called the foil, is a new face, never seen before by the observer. The task is to use the right and left arrow keys to indicate which face in each pair is the one seen previously. Crucially, half the face pairs appear upside-down. The measure of interest is report accuracy for right-side up compared with upside-down faces. Please click here to view a larger version of this figure.

Impressively, for successful recognition, complex and demanding computations must occur in dedicated brain networks to integrate separate features into a cohesive face.

While recognizing faces right side up is relatively easy, identifying them in an upside-down position is far more difficult, even though this is not true for other kinds of visual objects.

This is often referred to as the inverted-face effect, and is used in experiments designed to investigate how face recognition takes place both cognitively and in the brain.

This video will demonstrate how to design and execute, as well as how to analyze and interpret an experiment investigating the inverted-face effect via an incidental-encoding memory paradigm.

In this experiment, participants are asked to judge male and female faces in two difference phases: incidental exposure and testing.

During the first incidental-exposure part, the participant is shown a set of 40 faces, one-at-a-time for 1 s each.

After every image is displayed, the participant is asked to report whether it was male or female by making an associated key press. This process mimics our natural ability to process faces—incidentally, without knowing it.

Then, for the second, test phase, the participant is shown two faces side-by-side. One is randomly chosen from the incidental-exposure portion and the other, called the foil, is sex-matched and never seen before by the participant.

Faces in the testing period are also randomly intermixed, with half of them upside-down and the other half, right side up. The participant is asked to indicate which of the two was seen previously.

In this case, the dependent variable is the number of faces correctly identified—a simple measure of memory accuracy—across upright and inverted orientations.

Participants are expected to perform better at recalling previously seen faces when they are shown upright, as opposed to inverted. Poor performance when identifying the inverted faces is known as the inverted-face effect.

Before starting the experiment, verify that the participant does not have any known visual impairments or difficulty in recognizing people.

To begin, seat the participant 60 cm from the presentation computer. Explain the instructions for the incidental-exposure phase without mentioning the test phase to come.

Start the program and stand nearby as the participant performs the first phase of the experiment and completes 40 trials in a 5-min period. Note that they see a single face for 1 s, and identify the sex of the face by pressing the 'M' key for male or 'F' for female.

Following the initial phase, thank the participant for completing this portion of the study and inform them of the instructions for the next test phase.

Once again, start the program and stand nearby as they complete the second memory phase of 40 trials. In this part, note that the participant presses either the left or right arrow key to indicate which face was observed previously.

To analyze the data, simply calculate the proportion of faces correctly identified and graph the results of memory accuracy by trial type: upright versus inverted.

Notice that for most visually normal participants, the accuracy is much higher when identifying faces that are upright as opposed to inverted, demonstrating the inverted-face effect.

Poor performance with the inverted ones—near chance—suggests that specialized facial processing mechanisms are tuned to take advantage of the fact that they are almost always experienced in an upright orientation.

Now that you are familiar with the complexity involved in processing inverted faces, let’s examine additional research scenarios where the effect can be applied.

In addition, brain damage to the FFA may result in a disorder known as prosopagnosia—the inability to recognize faces, including your own.

The task is often used to diagnose face blindness, as prosopagnostic individuals typically have just as much difficulty identifying right-side-up faces, as they do with those that are inverted.

You’ve just watched JoVE’s introduction to the inverted face effect. Now you should have a good understanding of how to design and conduct this type of experiment by implementing the encoding of a series of faces and retrieving familiar faces by memory. You should also know how to analyze and interpret the results.

To analyze the results, simply compute the proportion of faces correctly identified by the participant in trials with upside-down (inverted) and trials with right-side up (upright) faces. Compare performance using a bar graph, as shown in Figure 2. For most visually normal observers, accuracy will be much higher with upright compared to inverted faces. However, this is a difficult task, and you may find performance below 0.9 even for upright faces. For inverted faces, performance may even approach chance, 0.5-what an observer would score if they just guessed on each trial. Poor performance with inverted faces shows that specialized computations and brain mechanisms used for recognizing faces are tuned to take advantage of the fact that faces are almost always experienced in an upright orientation. 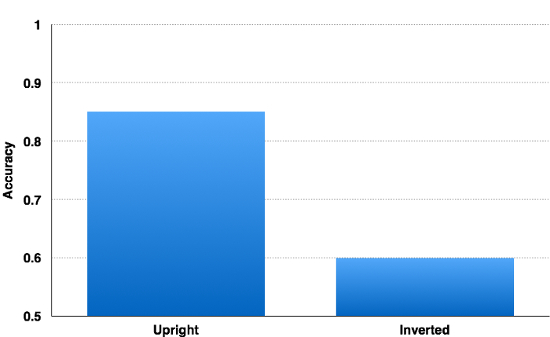 The discovery that inverted faces are difficult to process has many applications. Neuroimaging studies, for example, have taken advantage of the effect to identify brain regions involved in specialized face processing. Brain scans are taken when observers view upright as well as inverted faces. The responses to the two kinds of stimuli are then compared. Both sets of stimuli have very similar visual properties overall, leading to similar activity throughout much of the visual system. In one brain area though, upright faces produce a much more vigorous response than inverted ones, suggesting that inverted faces fail to engage specialized face-processing neurons. The area that responds this way is called the fusiform gyrus, or the fusiform face area (sometimes FFA for short). This brain region is implicated in many other studies that investigate specialized aspects of face processing.

A second application has to do with a disorder known as prosopagnosia. This refers to extreme difficulty recognizing, at times even detecting faces. Prosopagnosia can arise following brain damage to the fusiform gyrus. But it is now known to also appear in people with no known cause of brain damage. One way that prosopagnosia is assessed involves the inverted-face effect. In particular, individuals with prosopagnosia don't show a typical inversion effect. Although they have no more trouble recognizing upside down faces than they do right side up ones, they have considerable trouble with right side up ones in general. This lack of an inverted face effect suggests that prosopagnosia is caused by the absence of specialized face processing systems-the kind that seem to know that faces are usually seen right side up. 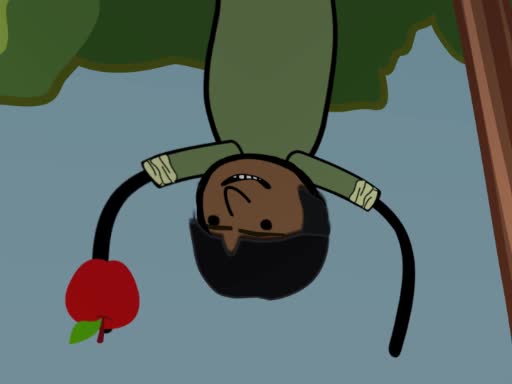