When a pot of water is placed on a hot stove, heat is said to "flow" from the stove to the water. When two or more objects are placed into thermal contact with each other, heat spontaneously flows from the hotter objects to the colder ones, or in the direction that tends to equalize the temperature between the objects. For example, when ice cubes are put in a cup of room-temperature water, heat from the water flows to the ice cubes and they begin to melt. Often, the term "heat" is used inconsistently, usually to simply refer to the temperature of something. In the context of thermodynamics, heat, like work, is defined as a transfer of energy. Heat is energy transferred from one object to another because of a difference in temperature.

Furthermore, the total energy of any isolated thermodynamic system is constant-that is, energy can be transferred to and from different objects within the system and can be transformed to different types of energy, but energy cannot be created or destroyed. This is the first law of thermodynamics. It is very similar to the conservation of energy law discussed in another video, but in the context of heat and thermodynamic processes. In the case of ice cubes in water, if the first law of thermodynamics was invalid, then one might expect that adding ice cubes to an isolated room-temperature cup of water would cause the water to boil, which would imply the creation of energy.

There is a clear distinction between internal energy, temperature, and heat. The internal energy of a substance refers to the total energy of all molecules in the substance. Its temperature is a measure of the average kinetic energy of all individual molecules. Consider two pieces of hot metal in thermal equilibrium resting next to each other, one half the size of the other. They both have the same temperature, but the smaller piece of metal has half the thermal energy than the other. Finally, heat, as discussed above, is the transfer of energy from different objects.

where c is a characteristic quality of the material called its specific heat (or sometimes called specific heat capacity). Rearranging Equation 1 gives:

Hence, the units of specific heat is J. The specific heat can be described as the amount of heat required to raise 1 g of a substance by 1 °C. At standard atmospheric pressure, the specific heat of water is known to be 4.18 J/(g°C). In other words, if 4.18 J of energy is supplied to 1 g of water, its temperature would increase by 1 °C. However, this is assuming that the sample of water is sufficiently isolated from its surroundings. If it is not, some of the energy being transferred to the water could be lost to the environment surrounding the water-the surrounding air, for instance. This kind of energy loss, or transfer, is referred to as the system "doing work." The first law of thermodynamics can then be written as:

where U is the total internal energy of a system, Q is the heat added to the system, and W is the work done by the system.

This lab will feature a "coffee cup calorimeter," which is essentially a Styrofoam cup. Styrofoam sufficiently insulates the interior substance from the surroundings of the cup so that the system will do no work and W = 0.

1. Measure the specific heat capacity of lead and demonstrate the first law of thermodynamics.

Enthalpy is a type of energy that flows between objects of different temperatures.

In order to understand enthalpy, one must be familiar with the first law of thermodynamics, which states that the energy cannot be created or destroyed, it can only change forms. And the total amount of energy in a system is constant.

The concept of enthalpy is evident in a pot of water on a stove. Heat, denoted by the letter Q, spontaneously flows from the hot stove to cooler water. In response, the temperature of the water rises. However, since this is an open system, there is some heat lost to the surroundings.

On the other hand, a system can be thermodynamically isolated, like a thermos filled with hot water, where heat is not transferred between the system and its surroundings. If you drop a piece of a cold metal into this system, the heat spontaneously flows from the hot water to the cooler metal. So, if we apply the first law of thermodynamics to this isolated system, we can say that the heat lost by the water, or Qout, equals the heat absorbed by the metal, or Qin.

In this video, we will demonstrate this simple heat transfer experiment that tests the first law of thermodynamics.

Before delving into the protocol, let's review some important concepts related to this experiment. As we discussed, heat, or Q, is a type of energy that is spontaneously transferred from a hot to a cold object.

Heat is often confused with temperature, which is the measure of the average kinetic energy of all of the individual molecules in a substance. For example, consider a large and small piece of hot aluminum at thermal equilibrium. They both have the same temperature, however the smaller piece of metal has less thermal energy than the other because it has fewer molecules and less mass.

The other factor is C, or the heat capacity, which depends on the material. For example, wood has a higher heat capacity than aluminum. This means that less heat is needed to increase the temperature of 1 kg of aluminum than 1 kg of wood.

C is a constant that is defined as the amount of heat required to raise the temperature of a unit mass of a substance by one degree. These values have been calculated empirically for many common materials, like water.

In the next section, we will see how to experimentally calculate C for lead using a calorimeter, which provides a thermodynamically isolated system.

First, obtain two Styrofoam cups, which will act as the insulated calorimeter in this experiment. Cut a small portion off of the top of one cup, so that it can act as a lid for the other. Punch a small hole in the lid so that the thermometer will fit through tightly

Pour 220 mL of water into the unmodified cup, then place the lid on top. Measure the temperature of the water.

Next, fill a beaker with enough water so that a lead sample can be fully submerged.Place the beaker on a hot plate, and bring the water to a boil.

Weigh a lead sample, and record the mass. Then, attach a string and suspend it using a ring stand. Submerge the lead sample in the boiling water until it is completely covered with water.

Quickly place the hot sample into the cup, and place the lid on top. Slide the thermometer back through the hole in the lid.

Swirl the coffee cup with the lead sample to ensure a uniform temperature. Watch the temperature on the thermometer as it changes, and record the final stabilized temperature.

From the first law of thermodynamics, we know that in this experiment, the hot piece of lead transferred heat to the colder water. If we assume that the calorimeter provides a thermodynamically isolated system, then the heat output from the lead equals the heat input to the water. Using the formula Q = mCΔT, we get the following equation.

This is in excellent agreement with the known heat capacity of lead, 0.128. This result validates the first law of thermodynamics.

Heat transfer and the conservation of energy principles apply to several day-to-day events, but often go unnoticed. Here are some examples.

A simple experiment using water and ice demonstrates the first law of thermodynamics and heat transfer by thermal conduction. Initially, the glass of water is at room temperature and is cooled with the addition of ice. Eventually, the ice melts and the water and melted ice reach the same temperature, as heat was transferred from the water to the ice.

However, because the system is not isolated from the surroundings, eventually the warmer room transfers heat to the water raising the temperature.

You've just watched JoVE's introduction to heat and the first law of thermodynamics. You should now understand the basic concept of heat and the conservation of energy. Thanks for watching!

Using the values recorded in Table 1, the specific heat of lead can be calculated. From the first law of thermodynamics, it is known that energy is neither created nor destroyed in an isolated system, but energy can transfer between different objects within the system. When the hot piece of lead is put in the coffee cup calorimeter, heat will be supplied from the lead to the water, and that heat transfer is conserved; that is, the heat output of the lead, Qout, equals the heat input of the water, Qin

As in Equation 3, the total energy U is constant. Using Equation 1, Equation 4 can be equivalently written as:

With the specific heat of water known to be 4.18 J/(g°C) and the information from Table 1, clead can be solved for:

The accepted value for the specific heat of lead is 0.128, so the results here are in excellent agreement, with only a 1.5% difference.

The first law of thermodynamics applies to the entire universe-no energy can be created or destroyed throughout the universe, but all kinds of energy transfers and transformations do take place. Plants convert energy from sunlight into the chemical energy stored in organic molecules, many of which we subsequently eat. Nuclear power plants that produce much of our electricity use heat transfer from hot radioactive rods to produce steam, which powers turbines that generate electricity. Refrigerators work by using electricity to pull heat out of the system. An evaporator filled with coolant and a condenser perform work on the refrigerator to effect a negative heat transfer.

Heat transfer was observed in a closed system between a piece of hot lead and room-temperature water. The specific heat capacity was measured by measuring temperature changes in known quantities of water and lead. If the Styrofoam cup system was not sufficiently insulated from its surroundings, heat from the system would have been lost-in other words, the hot water/lead would have done work on the surroundings, as in Equation 3. If this was the case, the calculations performed in this lab would have been much more difficult to make, since the surrounding air readily dissipates heat to its surroundings. Because Styrofoam cups acts as a good insulator, the system was considered independent of the surrounding air. The first law of thermodynamics was observed, as no energy was created or destroyed during the experiment; the energy of the closed system was conserved. 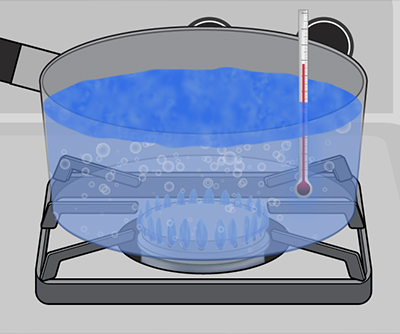