Figure 1: Diagram showing magnetic field patterns (visualized by magnetic field lines) generated by a straight-line current (a), a solenoid (b), and a bar magnet (c). 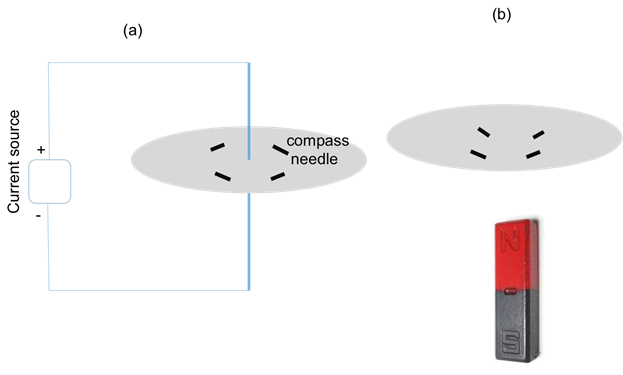 Figure 2: Diagram showing experimental setups using (a) a current flowing in a straight segment of wire that runs perpendicular to a plate and through the center hole on the plate; or (b) a bar magnet brought close to the plate and oriented perpendicular to the plate, to generate magnetic fields, which will orient compass needles on the plate along the direction of the local magnetic fields. 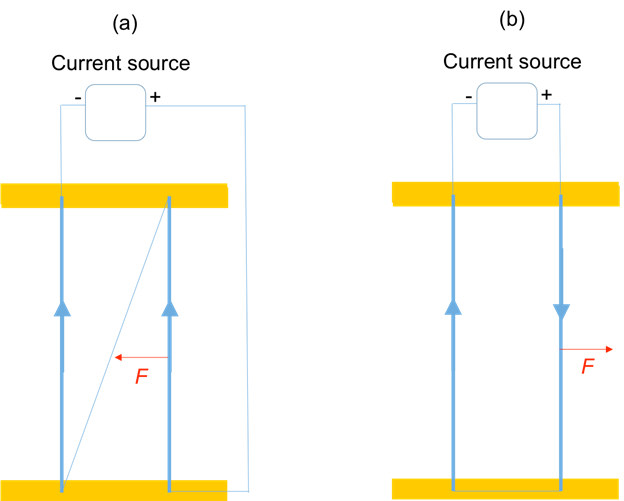 Figure 3: Diagram showing experimental setups of two parallel wires with current flowing in the same (a) or opposite (b) directions.

Magnetic fields are fundamental to electromagnetism and underlie many practical applications ranging from compasses to magnetic resonance imaging.

Magnetic fields or B-fields can be generated by moving charges, such as an electrical current, or objects such as bar magnets due to the microscopic dynamics of charges inside the magnetic material.

For example, a long straight wire carrying an electrical current produces a magnetic field, whose direction, as represented by "magnetic field lines", is along the circular tangent direction around the wire.

Having reviewed the basics of magnetic fields, let us perform a simple experiment to visualize these magnetic field lines and demonstrate how the Lorentz force exerted by a generated magnetic field affects a parallel current-carrying wire.

Gather the necessary materials and instruments, namely a DC current source, a plastic board mounted with several compass needles and a straight conducting wire passing through its center, and a permanent bar magnet.

Observe the plastic board with a hole in its center. It is mounted with several compass needles around the center hole using pins, such that the needles are free to rotate.

Also note that the conducting wire is fed through the center hole of the board. Make sure that the wire is perpendicular to the board. Connect the wire to the DC current supply using cables with clamps.

Turn ON the current source and set the current supply to +5 amperes. Observe the behavior of the compass needles.

Next, turn OFF the power supply and switch the positive and negative cables. Then, turn ON the power supply to reverse the direction of the current flowing through the wire and observe the compass needles again.

Now turn OFF and disconnect the current supply and obtain a similar plastic board mounted with magnetic needles, but without the conducting wire fed through it. Next, identify the north pole of the bar magnet.

With the long-axis of the bar magnet parallel to the board, bring the north pole closer to the board from the side. Observe the compass needles for any change in orientation.

Now flip the bar magnet such that the south pole is closer to the board. Once again, observe the compass needles for any change in orientation.

First assemble a frame with two bars, one of them is horizontal running along the top of the frame and the other is vertical that connects the base to the first bar. Next, anchor or tape the mid section of the two long conducting wires to the frame. Dangle one end of both wires from the frame such that the two wires are parallel to each other.

Now, connect the end of the two wires to the switch and the terminals. Then connect the setup to a battery.

Make sure that the wires are connected such that the current flows in the same direction in both wires. Then, flip the switch to connect the battery to the conducting wires.

Observe the two wires when the current is passing through them. Next, turn OFF the switch to stop the flow of current through the wires.

Now having reviewed the protocols, let us review the results of the experiments performed.

On reversing the direction of the current, the local magnetic field reverses, which in turn reverses the orientation of the compass needles.

And when the bar magnet is flipped, the direction of the magnetic field also reverses, which reverses the orientation of the compass needles.

In the experiment with the two long wires, the wires are attracted to each other when the current flowing in them has the same direction. This is because of the Lorentz force generated by the magnetic field.

On the other hand, when the flow of current in the two wires is in opposite directions to each other, the right hand rule shows that the direction of Lorentz force at the right wire site is away from the left wire, making the force repulsive. Therefore, the two wires are pushed apart.

Centuries ago, the Song dynasty of China invented the first magnetic compass that was used for navigation. Since then we have relied on the compass, which works in tandem with the earth's own magnetic field, for direction.

Magnetic fields also have a multitude of applications in the field of medicine and medical diagnostics. The most common use of magnetic fields is in magnetic resonance imaging or MRI. MRI scanners use strong magnetic fields and field gradients to generate images of the inside of the body.

You've just watched JoVE's introduction to magnetic fields. You should now know how to visualize magnetic fields using compass needles and understand how the Lorentz force of a magnetic field produced by a current affects another nearly parallel current. Thanks for watching! 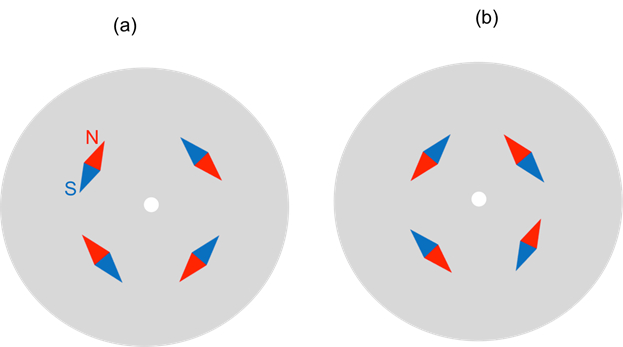 Figure 4: Diagram showing representative patterns of the compass needles responding to the current-induced magnetic fields (a) when the current is positive as shown in the setup shown in Figure 2a, where the current flows from top to bottom, and (b) when the current reverses (now from bottom to top). 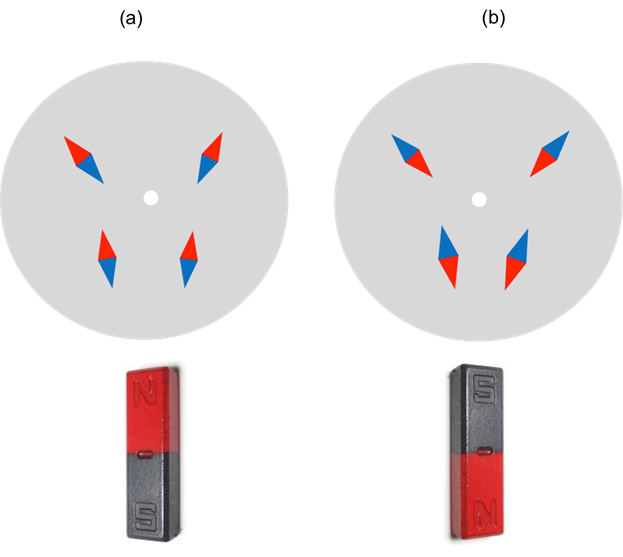 For Section 2, the two wires will be seen to attract to each other when the currents flowing in them have the same direction, and repel each other when the currents in them have opposite directions. This is due to the Lorentz force of the magnetic field generated by one current acting on the other current-carrying wire. For the situation in Figure 3a (currents in two wire have same direction), the magnetic field (B) produced by the left wire is pointing into the page at the position of the right wire (according to the right hand rule, as well as in Figure 4b), and therefore the Lorentz force as determined by the vector product of qv (along the current direction) and B will point to the left (thus attractive). The force reverses (pointing to the right, thus repulsive) for the situation in Figure 3b, when the current in the right wire reverses (qv reverses). The directions of the force due to the magnetic field created by left wire acting on the right wire are depicted by red arrows in Figure 3.

In this experiment, we have visualized magnetic fields using compass needles that orient with the local magnetic field. We also demonstrated the Lorentz force of a magnetic field produced by a current on another nearly parallel current. 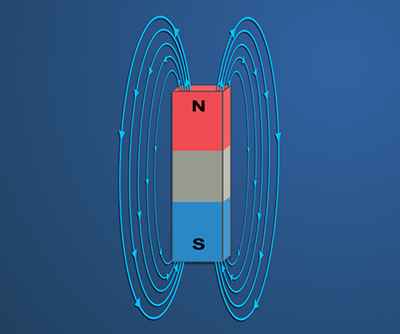