The elevated plus maze test is one of the most widely used tests for measuring anxiety-like behavior in mice. Here, we present a movie showing the detailed procedures for conducting the test.

Although the mouse genome is now completely sequenced, the functions of most of the genes expressed in the brain are not known. The influence of a given gene on a specific behavior can be determined by behavioral analysis of mutant mice. If a target gene is expressed in the brain, behavioral phenotype of the mutant mice could elucidate the genetic mechanism of normal behaviors. The elevated plus maze test is one of the most widely used tests for measuring anxiety-like behavior. The test is based on the natural aversion of mice for open and elevated areas, as well as on their natural spontaneous exploratory behavior in novel environments. The apparatus consists of open arms and closed arms, crossed in the middle perpendicularly to each other, and a center area. Mice are given access to all of the arms and are allowed to move freely between them. The number of entries into the open arms and the time spent in the open arms are used as indices of open space-induced anxiety in mice. Unfortunately, the procedural differences that exist between laboratories make it difficult to duplicate and compare results among laboratories. Here, we present a detailed movie demonstrating our protocol for the elevated plus maze test. In our laboratory, we have assessed more than 90 strains of mutant mice using the protocol shown in the movie. These data will be disclosed as a part of a public database that we are now constructing. Visualization of the protocol will promote better understanding of the details of the entire experimental procedure, allowing for standardization of the protocols used in different laboratories and comparisons of the behavioral phenotypes of various strains of mutant mice assessed using this test.

Although the mouse genome has been sequenced, the functions of most of the genes are not known. Genetic modification techniques allow for deletion or other manipulation of a specific gene in mice (Austin et al., 2004; Aiba et al., 2007). The influence of a given gene on a specific behavior can then be determined by conducting behavioral analyses of the mutant mice (Takao and Miyakawa, 2006b; Takao et al., 2007).

The elevated plus maze test is one of the most popular tests of all currently available animal models of anxiety (Rodgers and Dalvi, 1997; Crawley, 2007). This test for anxiety-like behavior has been used for screening and phenotyping transgenic and knockout mice (Crawley, 1999) and for drug discovery (Hogg et al. 1996; Crawley, 2007). The elevated plus maze test has a strong predictive validity for screening anxiolytic drugs (Rodgers and Dalvi, 1997; Mechiel Korte and De Boer, 2003; Crawley, 2007); anxiolytic drugs specifically increase, and anxiogenic drugs specifically decrease, the number of entries into the open arms and the time spent there. The total entries score and total distance are considered a useful index of general activity. Total entries score is also an index of anxiety, and the percentages of entries and time spent in each arm constitute the index of primary anxiety (Rodgers and Dalvi, 1997, Mechiel Korte and De Boer, 2003). The open and closed arms are considered to evoke the same exploratory drive, therefore avoidance of the open arms is considered to be a result of the induction of higher levels of fear (Rodgers and Dalvi, 1997). It is thought that the aversion of mice to explore the open arms of the maze is caused by fear of open and elevated spaces.

In 1984, Handley and Mithani reported on preliminary work with the elevated X (plus) maze test described above. The original test apparatus was raised 70 cm above the floor, and comprised two closed and two open arms, each of which measured 45 cm long by 10 cm wide. In their initial studies, they reported the ratio of open/total arm entries (Handley and Mithani, 1984). Subsequently, other indices were developed that included the number of entries into the closed and open arms and the time spent in the closed and open arms for rats (Pellow et al, 1985; Pellow and File, 1986) and mice (Lister, 1987).

The measures of the elevated plus maze test are recorded by an observer during the experiment. In our laboratory, the test is recorded with a video camera connected to a computer and the behavioral data (Image EP) are acquired and analyzed using the Image EP program. Number of entries onto the open arms versus number of total arm entries, and time spent on the open arms versus closed arms, provide the measures of anxiety-like behavior.

We assessed more than 90 strains of genetically engineered mutant mice using the protocol shown in the movie and have a large set of raw data for more than 5000 mice (including wild-type and mutant mice). In our test battery, wild-type littermates are usually used as a control. As a background strain, C57BL/6J mice are widely used. We collected the data of C57BL/6J mice in the behavioral tests. The values obtained from C57BL/6J mice in our elevated plus maze test are as follows (n=914; mean SEM); total distance traveled: 1547.55 14.27 cm; duration of time spent: 56.49 2.42 s (open arms), 384.02 3.13 s (closed arms), 161.90 2.17 s (maze center); ratio of time spent in the open arms: 9.19 0.36%, ratio of time spent in the closed arms: 63.82 0.52%; number of entries: 7.64 0.21 (open arms), 24.32 0.28 (closed arms); % open arm entries: 21.9 0.05, % closed arms entries: 78.1 0.05. C57BL/6J mice spend less time in open arms than in closed arms (p<0.0001, n=914, paired-t test). This indicates that C57BL/6J mice tend to avoid the open arms, and that the time spent in the open arms is a valid index of anxiety-like behavior. Additionally, the order of trials is counterbalanced across genotypes, because the trial number affects the time spent in the open arms and the center platform. That is, the indices all increase during the 3rd and 4th mice compared to the 1st mice (p=0.0089, n=476) (unpublished data). With our protocol, analysis of more than 1661 mice showed that the sequential order of the mice tested in a cage does not significantly affect the open arm stay time (unpublished data). That is, the performances of the first mice taken from the cage do not significantly differ from those of the second, the third or the last mice.

Crabbe and colleagues reported that uncontrolled variables and experiments characterizing mutants may yield results that are specific to a particular laboratory (Crabbe et al., 1999). The procedural differences that exist between laboratories make it difficult to replicate or compare the results among them. Establishing visual documentation of the protocol will promote better understanding of experimental procedures, allowing for standardization of the protocols used across laboratories and for comparisons of the behavioral phenotypes of various strains of mutant mice assessed using these tests. We previously published a movie protocol of the light/dark transition test (Takao and Miyakawa, 2006a). Likewise, movies of other protocols, such as for the open field test, the porsolt forced swim test, and fear conditioning tests that we use in our behavioral test battery are presently being made for publication as future video journal articles.

All procedures were approved by the Animal Use and Care Committee of Kyoto University.

This research was supported by Grants-in-Aid for Scientific Research of the Japan Society for the Promotion of Science (JSPS), Grant-in-Aid from Ministry of Education, Culture, Sports, Science and Technology in Japan, Grants-in-Aid from BIRD and CREST of Japan Science and Technology Agency, Grant-in-Aid from Neuroinformatics Japan Center (NIJC), RIKEN and by Grant-in-Aid for Scientific Research on Priority Areas-Integrative Brain Research (Shien)- from MEXT in Japan. We thank O'hara & Co. and Mariko Hayashi for their assistance in creating this movie. 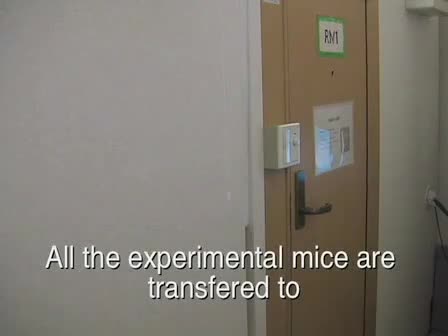