We describe the fine dissection of the stomatogastric nervous system from the stomach of the American lobster (Homarus americanus).

With the goal of understanding how nervous systems produce activity and respond to the environment, neuroscientists turn to model systems that exhibit the activity of interest and are accessible and amenable to experimental methods. The stomatogastric nervous system (STNS) of the American lobster (Homarus americanus; also know was the Atlantic or Maine lobster) has been established as a model system for studying rhythm generating networks and neuromodulation of networks. The STNS consists of 3 anterior ganglia (2 commissural ganglia and an oesophageal ganglion), containing modulatory neurons that project centrally to the stomatogastric ganglion (STG). The STG contains approximately 30 neurons that comprise two central pattern generating networks, the pyloric and gastric networks that underlie feeding behaviors in crustaceans1,2. While it is possible to study this system in vivo3, the STNS continues to produce its rhythmic activity when isolated in vitro. Physical isolation of the STNS in a dish allows for easy access to the somata in the ganglia for intracellular electrophysiological recordings and to the nerves of the STNS for extracellular recordings. Isolating the STNS is a two-part process. The first part, dissecting the stomach from the animal, is described in an accompanying video article4. In this video article, fine dissection techniques are used to isolate the STNS from the stomach. This procedure results in a nervous system preparation that is available for electrophysiological recordings.

Prior to beginning this protocol the stomach of the lobster must be removed from the animal and prepared as described in the companion JoVE article (Bierman & Tobin, 2009). The majority of the steps outlined below are to be performed under a dissection microscope.

Part I- Isolating the Commissural Ganglia

The anatomy of lobster stomach and STNS has been well described previously5,6, and variations of this dissection procedure have been utilized in numerous studies. We recommend becoming familiar with the anatomy of the stomach5-7and STNS5,8 prior to beginning dissections. Such familiarity will decrease the risk of accidental damage to nerves and tissue.

To maintain the health of the preparation, it is critical to maintain the preparation at a cool temperature. This is easily achieved by exchanging the saline every 30 mins with 4˚C saline kept in a refrigerator. When immersed in cold saline, the isolated STNS preparation is viable for many hours. Recordings in related Homarus gammarus have demonstrated stable rhythmic activity from the STG throughout 5 days in vitro9; similar robustness has been seen in H. americanus (pers. obs.).

This preparation may be used for a variety of studies focused on nervous system function. The activity of the neurons may be recorded either using intracellular, sharp electrode recordings from somata or axons, or by recording electrical impulses extracellularly from the nerves. Many ion channels in the STG neurons have been partially cloned and mRNA can be measured from manually pulled somata10,11.

We would like to acknowledge our advisor, Dr. Eve Marder. This research was supported by National Institute of Health grants NS17813 to Eve Marder and NS059255 to A-E T. 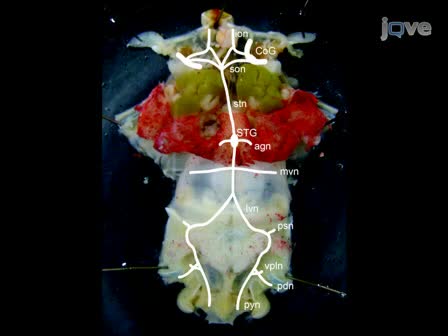