Description of a virus-induced gene silencing (VIGS) method for knock-down of gene expression in Nicotiana benthamiana and tomato.

RNA interference (RNAi) is a highly specific gene-silencing phenomenon triggered by dsRNA1. This silencing mechanism uses two major classes of RNA regulators: microRNAs, which are produced from non-protein coding genes and short interfering RNAs (siRNAs). Plants use RNAi to control transposons and to exert tight control over developmental processes such as flower organ formation and leaf development2,3,4. Plants also use RNAi to defend themselves against infection by viruses. Consequently, many viruses have evolved suppressors of gene silencing to allow their successful colonization of their host5.

Virus-induced gene silencing (VIGS) is a method that takes advantage of the plant RNAi-mediated antiviral defense mechanism. In plants infected with unmodified viruses the mechanism is specifically targeted against the viral genome. However, with virus vectors carrying sequences derived from host genes, the process can be additionally targeted against the corresponding host mRNAs. VIGS has been adapted for high-throughput functional genomics in plants by using the plant pathogen Agrobacterium tumefaciens to deliver, via its Ti plasmid, a recombinant virus carrying the entire or part of the gene sequence targeted for silencing. Systemic virus spread and the endogenous plant RNAi machinery take care of the rest. dsRNAs corresponding to the target gene are produced and then cleaved by the ribonuclease Dicer into siRNAs of 21 to 24 nucleotides in length. These siRNAs ultimately guide the RNA-induced silencing complex (RISC) to degrade the target transcript2.

Different vectors have been employed in VIGS and one of the most frequently used is based on tobacco rattle virus (TRV). TRV is a bipartite virus and, as such, two different A. tumefaciens strains are used for VIGS. One carries pTRV1, which encodes the replication and movement viral functions while the other, pTRV2, harbors the coat protein and the sequence used for VIGS6,7. Inoculation of Nicotiana benthamiana and tomato seedlings with a mixture of both strains results in gene silencing. Silencing of the endogenous phytoene desaturase (PDS) gene, which causes photobleaching, is used as a control for VIGS efficiency. It should be noted, however, that silencing in tomato is usually less efficient than in N. benthamiana. RNA transcript abundance of the gene of interest should always be measured to ensure that the target gene has efficiently been down-regulated. Nevertheless, heterologous gene sequences from N. benthamiana can be used to silence their respective orthologs in tomato and vice versa8.

N. benthamiana plants used for silencing should be around 2 ½ weeks old which is the time when the cotyledons and the first 2 - 4 true leaves have emerged. Tomato (Solanum lycopersicum) plants are used 7 - 8 days post emergence, when the true leaves have not yet appeared.

Figure 1 shows a representative experiment with N. benthamiana and tomato plants silenced for PDS. Plants show the characteristic photobleaching phenotype observed in plants with diminished amounts of carotenoids. For the PDS-silenced control plants, photobleaching starts to be seen as soon as 1 ½ weeks after infiltration.

Figure 1. Silencing of the PDS control gene causes photobleaching in N. benthamiana (A) and tomato (B) plants. Photographs were taken 3 ½ weeks after silencing.

Bring to a final volume of 1 liter with distilled water. Autoclave. Be aware that AB salts precipitate as an orange powder. Just mix them well by swirling before their use.

Table 3. Preparation of 200 mM Acetosyringone. Please note that acetosyringone should be prepared the day it will be used.

Virus-induced gene silencing is a method that allows rapid reverse genetic screens. It avoids the generation of T-DNA or transposon mediated gene knock-outs, which are only available in certain plants like Arabidopsis and maize. It also circumvents the time consuming process of plant transformation and allows the targeting of multiple genes at the same time, provided that they have sufficient homology10 or that different host target sequences are arranged in tandem in the silencing vector6, 11.

However, silencing is never 100% efficient and therefore, care must be taken when interpreting results. A negative result may simply indicate that the residual protein concentration was sufficient to carry out its function without obvious phenotypic consequences. Also, some constructs are better at silencing than others so it is always advisable to use at least two different mRNA regions to generate the silencing constructs for each gene. Furthermore, there is always the possibility of off-target silencing if there is sufficient homology of a gene with your silencing construct or if secondary siRNAs, which may cause transitive silencing, are produced12. This holds especially true for gene families. It is therefore of utmost importance to quantify the silencing efficiency of your target and off-target genes, either by RT-PCR or Northern blot analyses. If RT-PCR is chosen as the method to estimate VIGS efficiency, one of the primers should anneal to the gene outside the region targeted for silencing so that the transcript being produced by the virus is not also amplified and the results truly reflect the dowregulation of a particular endogenous gene.

VIGS efficiency is always greater in N. benthamiana than it is in tomato. Therefore, caution must be taken when silencing tomato seedlings. In tomato, it is critical to choose the right plant developmental stage and to maintain proper environmental conditions for viral spread. Also, gene transcript abundance must be performed for each plant under study. In addition, usually in tomato VIGS, the A. tumefaciens strain is GV3101 while in N. benthamiana either GV3101 or GV2260 are used6,13. It is possible to silence a gene employing a heterologous sequence from another species, provided there is sufficient homology between the two. Also, when constructing a pTRV2-target gene vector, insert lengths should be in the range of 200 to 1000 bp and they should not include homopolymeric regions (e.g. poly A tails)14.

If the cultures carrying pTRV2 with the genes of interest become contaminated with PDS, sometimes no photobleaching will be observed. Instead, plants will have a shorter stature. Therefore, it is critical to minimize any sources of cross contamination during the experiment which could potentially bias your results.

We thank Dr. Patricia Manosalva for her valuable insights on the manuscript. Funding was provided by the National Science Foundation Plant Genome Program, award number DBI-0605059. 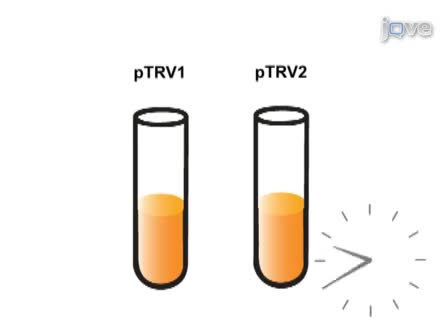