Electrophysiological recordings from Drosophila embryos allow analyses of developing muscle and neuron electrical properties, as well as characterization of functional synaptogenesis at the glutamatergic neuromuscular junction and central cholinergic and GABAergic synapses.

Drosophila is a premier genetic model for the study of both embryonic development and functional neuroscience. Traditionally, these fields are quite isolated from each other, with largely independent histories and scientific communities. However, the interface between these usually disparate fields is the developmental programs underlying acquisition of functional electrical signaling properties and differentiation of functional chemical synapses during the final phases of neural circuit formation. This interface is a critically important area for investigation. In Drosophila, these phases of functional development occur during a period of <8 hours (at 25°C) during the last third of embryogenesis. This late developmental period was long considered intractable to investigation owing to the deposition of a tough, impermeable epidermal cuticle. A breakthrough advance was the application of water-polymerizing surgical glue that can be locally applied to the cuticle to enable controlled dissection of late-stage embryos. With a dorsal longitudinal incision, the embryo can be laid flat, exposing the ventral nerve cord and body wall musculature to experimental investigation. Whole-cell patch-clamp techniques can then be employed to record from individually-identifiable neurons and somatic muscles. These recording configurations have been used to track the appearance and maturation of ionic currents and action potential propagation in both neurons and muscles. Genetic mutants affecting these electrical properties have been characterized to reveal the molecular composition of ion channels and associated signaling complexes, and to begin exploration of the molecular mechanisms of functional differentiation. A particular focus has been the assembly of synaptic connections, both in the central nervous system and periphery. The glutamatergic neuromuscular junction (NMJ) is most accessible to a combination of optical imaging and electrophysiological recording. A glass suction electrode is used to stimulate the peripheral nerve, with excitatory junction current (EJC) recordings made in the voltage-clamped muscle. This recording configuration has been used to chart the functional differentiation of the synapse, and track the appearance and maturation of presynaptic glutamate release properties. In addition, postsynaptic properties can be assayed independently via iontophoretic or pressure application of glutamate directly to the muscle surface, to measure the appearance and maturation of the glutamate receptor fields. Thus, both pre- and postsynaptic elements can be monitored separately or in combination during embryonic synaptogenesis. This system has been heavily used to isolate and characterize genetic mutants that impair embryonic synapse formation, and thus reveal the molecular mechanisms governing the specification and differentiation of synapse connections and functional synaptic signaling properties.

In the mature embryo and newly-hatched larva, the dorsal motor neuron population has been subject to more limited recording. Neuronal soma recordings reveal whole cell capacitance in the range of 1.8-2.5 pF (2.0 pF average), series resistance of 40-60 MΩ and input resistance of ~5 GΩ (Baines and Bate, 1998; Featherstone et al 2005). These cells clearly grow in size and complexity during embryonic maturation, and this growth continues throughout larval development. In third instars, whole cell capacitance is 17-20 pF, series resistance is 25-37 MΩ and input resistance averages ~900 MΩ (Rohrbough and Broadie, 2002; Richard Baines, personal communication). Ionic conductances increase throughout development, but current density (pA/pF) remains remarkably constant. In mature embryos, synaptic currents average 75-100pA in amplitude, with both rapid ESC events and prolonged currents averaging ~500 msec (Baines and Bate, 1998; Featherstone et al 2005). In embryos, these sustained events average 3-5 per min, increasing to ~20 per min in the first instar (Richard Baines, personal communication). Note that the morphological complexity and membrane properties of Drosophila neurons makes it virtually impossible to properly voltage clamp much of the cell beyond the soma. One should therefore interpret recordings with care.

Electrophysiological recording from Drosophila embryos requires manual manipulation and dissection. The health of the preparation, and consequent quality of the recordings, depends on one being able to quickly and neatly prepare the fragile embryonic tissues for recording, and then execute the experiment. Experimenters should be proficient in both embryonic dissections and patch clamp electrophysiology before trying to tackle both at once.

Recordings can be done in one of several variants of the “modified standard” or “haemolymph-like” (HL) salines. The primary differences between these two saline classes are 1) Na+ concentration (120-135 mM standard vs. 70 mM HL) and 2) Mg2+ concentration (4 mM standard vs. 20 mM HL). The major advantage of the high Na+ concentration in the standard solution is to facilitate action-potential propagation and, therefore, the maintenance of normal, patterned synaptic transmission. The HL salines suppress action-potential mediated synaptic transmission. The difference in Mg2+, which blocks voltage-gated calcium channels, alters the amplitude of synaptic transmission and shifts the Ca2+-dependency range upwards in the HL salines (Stewart et al. 1994). HL salines therefore show much lower synaptic transmission amplitudes at a given [Ca2+]. Careful control of osmolarity eliminates cellular vacuolation in both salines, and morphology appears equally well preserved in either saline. Since neither saline replicates actual haemolymph, the selection of a saline should reflect the needs of the question under study.

There are several important guidelines to maximize success of embryonic recordings. First, the ability to successfully form gigaohm seals on embryonic muscle decreases with developmental age. This is likely due primarily to development of the basement membrane surrounding the maturing muscles. To counteract this, longer collagenase treatment (1-2 min) is required. However, care must be taken because this lengthened enzymatic treatment will quickly compromise the muscle attachment to the body wall, and can easily lead to muscle detachment. One rule we have found effective is to limit the enzyme treatment to ~50% of the time that causes detectable muscle detachment. Second, it is crucial that the nerve has a tight fit in the suction electrode for adequate stimulation; too loose and the stimulation fails, too tight and it is not possible to stimulate an adequate section of the nerve. In our experience, this is definitely the biggest single limitation to successful NMJ recording. The appropriate diameter for the suction electrode must be empirically determined, but every effort should be made to preserve a good stimulation electrode, which can easily be used for an entire day of recording. Third, for successful neurotransmitter and drug applications to the NMJ, it is critical to become familiar with synapse placement. With experience, the stereotyped endings can easily be found with DIC optics. For the beginner, nerve terminals in the embryo can be revealed with membrane-permeant fluorescent mitochondrial dyes, such as Rhodamine 123 or 4-Di-2-Asp (Yoshikami and Okun, 1984; Broadie and Bate, 1993a). The dissected embryo is simply exposed to the dye (5mM, 5 mins) and excess dye removed with several washes of saline. The preparation is then viewed with an epi-fluorescence attachment and appropriate filters. Similar approaches can utilize transgenic GFP constructs marking the embryonic synapse. 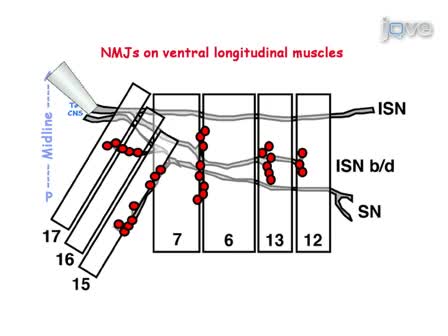