Stimulus-evoked [Ca2+]i signals of individual human sperm are assessed. Motile cells are loaded with Ca2+-sensitive fluorescent dye (AM-ester method) and immobilised in a perfusable chamber. Cells are imaged by time-lapse fluorescence microscopy and stimulated via the perfusing medium. Responses of single cells (or regions) are analysed offline using Excel.

Fluorescence microscopy of cells loaded with fluorescent, Ca2+-sensitive dyes is used for measurement of spatial and temporal aspects of Ca2+ signaling in live cells. Here we describe the method used in our laboratories for loading suspensions of human sperm with Ca2+-reporting dyes and measuring the fluorescence signal during physiological stimulation. Motile cells are isolated by direct swim-up and incubated under capacitating conditions for 0-24 h, depending upon the experiment. The cell-permeant AM (acetoxy methyl ester) ester form of the Ca2+-reporting dye is then added to a cell aliquot and a period of 1 h is allowed for loading of the dye into the cytoplasm. We use visible wavelength dyes to minimize photo-damage to the cells, but this means that ratiometric recording is not possible. Advantages and disadvantages of this approach are discussed. During the loading period cells are introduced into an imaging chamber and allowed to adhere to a poly-D-lysine coated coverslip. At the end of the loading period excess dye and loose cells are removed by connection of the chamber to the perfusion apparatus. The chamber is perfused continuously, stimuli and modified salines are then added to the perfusion header. Experiments are recorded by time-lapse acquisition of fluorescence images and analyzed in detail offline, by manually drawing regions of interest. Data are normalized to pre-stimulus levels such that, for each cell (or part of a cell), a graph showing the Ca2+ response as % change in fluorescence is obtained.

Sperm from healthy fertile males, with a normal semen analysis, are normally prepared for imaging as follows.

Figure 1 shows a series of images from an experiment in which the cells were stimulated with 3 μM progesterone. The upper row and movie 1 show the fluorescence images in grey-scale and the same mages are shown below (and in movie 2) in pseudocolor (lookup table '16_colors' in Image J), where 'cool' colors indicate low fluorescent intensity and 'warm' colors indicate high fluorescence intensity. Cells can be viewed in pseudocolor during the experiment, using lookup tables in IQ, but using grey scale is generally more informative for assessing .whether the cells are well-labeled. The first two images were collected at 0 s and 100 s after commencing recording. Fluorescence should be stable and tends to be strongest in the post acrosomal area and sperm neck. Progesterone entered the imaging chamber at approximately 175 s and the 3rd and 4th images (180 s and 220 s) shows a rapid increase in [Ca2+]i (fluorescence) originating in posterior head and neck region of the cell. Subsequent images are at 290, 360, 740, 990 and 1440 s, showing the decay of the initial [Ca2+]i transient and development of a secondary sustained elevation. Figure 2 shows a spreadsheet analysis, converting raw fluorescence values for each ROI to normalized fluorescence (% change in fluorescence compared to the control period) Figure 3 shows time-normalized fluorescence plots for 3 cells showing 'typical' responses to 3 μM progesterone. 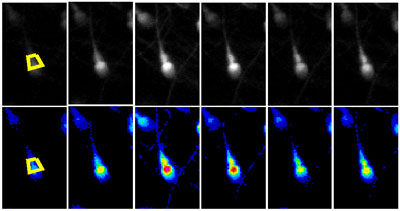 Figure 1. Example data from a cell stimulated with progesterone. A series of fluorescence images in grey scale (upper row) and pseudocolor (lower row) are shown. Time points are 0, 180, 220, 290, 360 and 990s. 3 μM progesterone entered the imaging chamber at 175 s. ROIs are shown in the first panel. 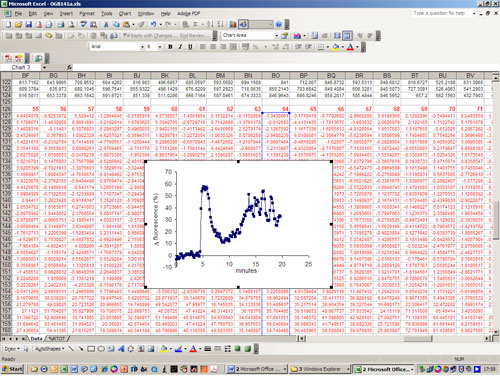 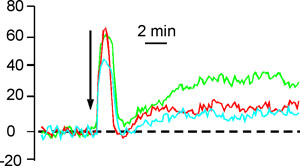 When carried out successfully, this technique allows recording of the distribution and kinetics of spontaneous and induced Ca2+ signals in human sperm. Responses can be obtained from a large number of cells (up to 200) which is important since human sperm can show a lot of variation in their spontaneous and stimulated Ca2+ signals. Successful labeling and survival of the cells during recording are highly dependent on sample quality. Poor samples give poor labeling , poor responses and cells may die during recording.

Human sperm are very sensitive to photo-damage and we therefore use the minimal necessary illumination (both intensity and exposure time) in order to maximize cell survival and minimize artifacts due to cell death. A high-sensitivity camera (permitting use of low-intensity illumination) is a great benefit since the camera will pick up weak fluorescence. Back-illuminated, EM-CCD cameras are particularly well-suited, though very expensive. LED illumination (instead of using a xenon or mercury lamp with excitation filter also improves cell survival (Nishigaki et al, 2006).

We do not use Fura-2, despite the obvious advantages of ratio-metric imaging, because Fura requires excitation with UV light and because it is necessary to take two images for each ratio. For data obtained with single wavelength, visible light dyes, normalization of the fluorescence intensity largely compensates for difference in dye loading between cells, but not for dye distribution within an individual cell, and this must be borne in mind. Though single wavelength dyes can, in principle, be calibrated, the accuracy of the technique is poor and we do not attempt to do this.

Whereas the ratio data obtained with Fura-2 (or the emission ratio dye indo), even without calibration, give an acceptably faithful representation of relative changes in [Ca2+]i, the fluorescence intensity of the single wavelength dyes is far from linearly related to [Ca2+]i. Over the most useful part of the saturation curve the relationship for single wavelength dyes usually approximates to logarithmic. We currently use Oregon Green BAPTA-1 (Figure 4) because it is sensitive to small changes in [Ca2+]i close to resting level s (50-100 nM). When [Ca2+]i rises above 1 μM responses will be under-represented in terms of fluorescence change and the dye may saturate. An option for improvement of the technique without resorting to UV excitation is to double load cells with a dye such as Fluo-3 and Fura red. Both can be excited at 488 nM but simultaneous their responses are very different. Recording of emission at 540 and 650 nM provides a ratio which can provide a better method for accurate monitoring of [Ca2+]i (Haughland, 2002) and may be applicable to sperm (Nisigaki et al, 2006). 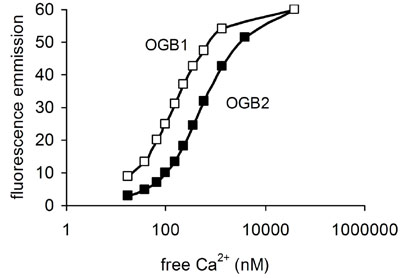 Figure 4. Relationship between free [Ca2+] (nM) and fluorescence emission at peak wavelength (approx 525 nm) for Oregon Green BAPTA-1 and Oregon Green BAPTA-2. OGB1 gives a higher fluorescence at resting [Ca2+] but saturates at lower levels and thus has a smaller useable range. Data for these plots were obtained from the Molecular Probes handbook (Haughland, 2002).

This work is funded by the Wellcome Trust, The Medical Research Council, The Royal Society, Birmingham Science City and The Infertility Research Trust. We would like to acknowledge the expert assistance of Cairn Research in constructing and integrating the imaging rigs. 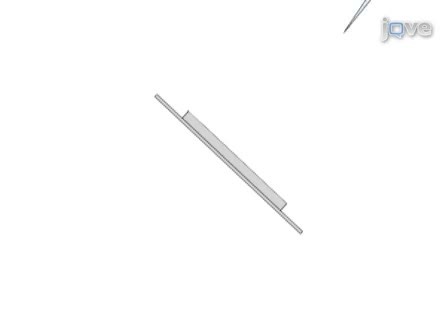