We provide a reproducible method for culturing confluent monolayers of human fetal retinal pigment epithelial cells (hfRPE) cells that exhibit morphology, physiology, polarity, and protein and gene expression patterns of adult native tissue. This work has been extended to an animal model of several eye diseases.

We have developed a cell culture procedure that can produce large quantities of confluent monolayers of primary human fetal retinal pigment epithelium (hfRPE) cultures with morphological, physiological and genetic characteristics of native human RPE. These hfRPE cell cultures exhibit heavy pigmentation, and electron microscopy show extensive apical membrane microvilli. The junctional complexes were identified with immunofluorescence labeling of various tight junction proteins. Epithelial polarity and function of these easily reproducible primary cultures closely resemble previously studied mammalian models of native RPE, including human. These results were extended by the development of therapeutic interventions in several animal models of human eye disease. We have focused on strategies for the removal of abnormal fluid accumulation in the retina or subretinal space. The extracellular subretinal space separates the photoreceptor outer segments and the apical membrane of the RPE and is critical for maintenance of retinal attachments and a whole host of RPE/retina interactions.

All human tissue related research follows the tenets of the Declaration of Helsinki and the NIH institutional review board. Fetal eyes are obtained by an independent procurer, Advanced Bioscience Resources (ABR, Alameda, CA), from random donors at 16 to 22 weeks of gestation, placed in RPMI-1640 media containing tubes (provided by ABR), packed on ice, and delivered by an overnight priority delivery service. Tissues remain viable up to 48 hours after enucleation.

MEM-alpha modified medium (Sigma-Aldrich) is used as the base medium to prepare 5% and 15% serum-containing media for culturing of RPE cells (RPE medium; Table 1 below).

* THT is made by dissolving taurine-hydrocortisone-triiodo-thyronin in 1 1.5 mL PBS before making the medium. Multiple aliquots are made and stored at -80°C to simplify culturing preparation of the culture medium.

** Fetal bovine serum is not obtained from Sigma-Aldrich or Gibco.

Fetal bovine serum used in media preparation is obtained from Atlanta Biologicals (Norcross, GA). Each bottle of the serum is heat inactivated (56°C for 1hr) prior to use. To ensure cell culture consistency large amounts of serum from the same lot are purchased and stored in -20°C until they are used for media preparation. Sparsely seeded cells from a specific batch of hfRPE cells are grown in 24- or 12- well plates for a few weeks in media containing 20% FBS from different lots. The fastest growing melanated cells with the most classical RPE morphology (cobblestone) indicate an appropriate serum lot that can be used for cell culture. 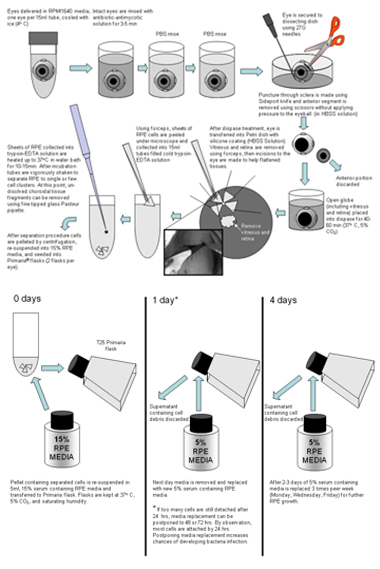 Figure 1. After incubation antibiotics are rinsed off twice with medium such as HBSS or PBS. One eye globe at the time is transferred to 10 cm Petri dish with coated with Sylgard-184 (WPI) and secured with 27G needles. Using ClearCut sideport knife (Alcon) an incision is made through the sclera below the ciliary body (1/3 of the distance from eye equator to the anterior surface). This incision is used to start a circular cut for removal of the anterior eye portion. This cut is made using a tungsten- carbide coated curved iris scissors with one blade serrated (FST). Prior to the removal of the anterior part of the eye, a cut is made through the vitreous body to avoid detaching the retina from the RPE at the posterior pole. After the anterior portion of the eye is removed, the posterior pole is incubated with dispase-I solution (2 U/mL, cat. no. 04942086001; Roche Diagnostics, Indianapolis, IN) in 5% serum containing medium for 40-60 minutes in 37°C-5% CO2. After dispase treatment, the posterior poles are transferred to a HBSS in Petri dishes with silicon padding (Sylgard 184; Dow Corning, Midland, MI) and dissected into quadrants or larger pieces to sufficiently flatten tissues. Then the retina is gently removed with forceps. Single-cell RPE layers were peeled off in sheets and collected directly into cold trypsin-EDTA (Gibco, #25200-056) solution. After the RPE are collected, tubes with tissues in trypsin-EDTA are sealed and transferred into water bath for 10-15 mins at 37°C. After 10 mins of incubation, the tubes are vigorously shaken to separate RPE into small clusters. If the separation is not complete, the tubes are placed back into water bath for another 5 mins. After trypsin-EDTA incubation, the tubes are inspected for possible un-dissolved mixed cell clusters. Any observed clusters are removed using fine tipped glass Pasteur pipette. After spinning down (1.4 rpm on clinical centrifuge for 4 mins), hfRPE cells are re-suspended in 15% RPE media and then put into Primaria flasks (example: cat. no. 08-772-45; Fisher Scientific, Pittsburgh, PA). This medium is replaced after 1 day with 5% serum-containing RPE medium, and subsequent changes were made every 2 to 3 days. After 3 to 4 weeks, the cells became confluent and uniformly pigmented. They are then trypsinized in 0.25% trypsin-EDTA for 10 to 15 minutes, re-suspended in 15% serum-containing RPE cell culture medium, and seeded onto clear cell culture inserts at 150 to 200K cells per well (Transwell; Corning Costar, Corning, NY), using 12-mm diameter inserts, 0.4-um pores, polyester membranes (example: cat. no. 07-200-161, Fisher Scientific). Before seeding, the wells were coated with human extracellular matrix (10 μg in 150 μL HBSS per well, cat. no. 354237; BD Biosciences, Franklin Lakes, NJ) and cured with UV light in the hood for 2 hours. In some cases, the trypsinization procedure was repeated for a second time, to collect the cells that did not detach after the first trypsinization. The same protocol (excluding coating with ECM) was used to culture cells on the flasks to generate the P1 population of cells. These cells were used in experiments when they had a total tissue resistance of ≥ 200 Ω•cm2 and were uniformly pigmented.

In previous experiments we have used these primary cultures to determine the expression, polarization and function of plasma membrane transport proteins and identify specific signaling pathways that regulate RPE function 1-11 These characteristics as they are accumulated provide a validation set of properties that can be applied to each cell generation. The experiments summarized below identify the proteins that determine transepithelial fluid transport and the integrity of the paracellular pathway. These in vitro experiments have been validated in an animal model of retinal re-reattachment 6. 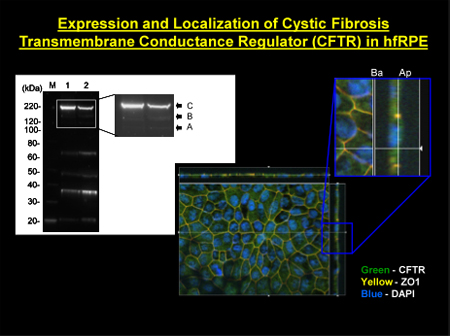 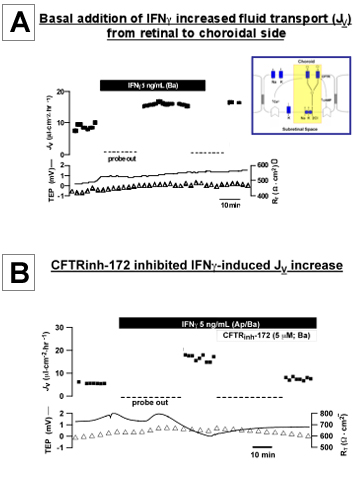 Figure 3. IFNγ-induced physiological changes in hfRPE. A: addition of IFNγ to the basal bath increased transepithelial fluid transport (Jv) across monolayer of primary, cultured hfRPE cells. Jv is plotted as a function of time in the top trace and net fluid absorption (apical to basal bath) is indicated by positive values; transepithelial potential (TEP) and total tissue resistance (RT) are plotted as a function of time in the bottom traces. B: Addition of CFTRinh-172(5 μM) to the basal bath inhibited the IFNγ-stimulated Jv increase. 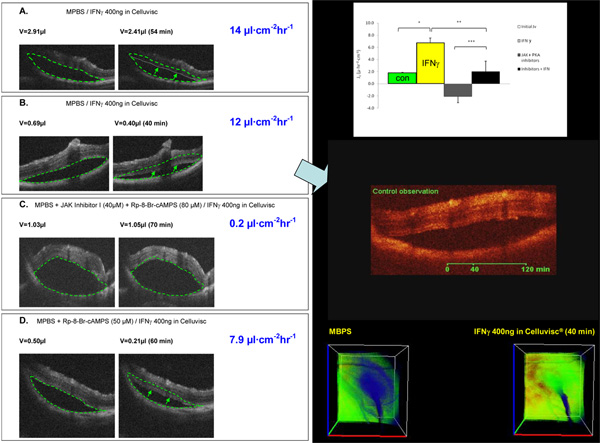 Figure 4. In vivo retinal detachment experiments. The procedures for these in vivo experiments have been previously described in detail 6. In these experiments, retinal detachments were created in rat eye by injection of 0.5-3 μL of modified PBS solution into the subretinal space (SRS), alone or with a combination of JAK-STAT and PKA pathway inhibitors. Each experiment had an initial control period of 40-70 min after creation of the retinal detachment. During this time, the rate of change of bleb volume was measured to insure bleb stability. Optical coherence tomography imaging (Institute of Applied Physics, Russian Academy of Science, Nizhniy Novgorod, Russia) was used to measure the time course of the volume change in SRS.

The time course of re-attachment volume change was measured by optical coherence tomography (OCT). OCT images from 4 different experiments (panels on the left; A-D) that show a change in detachment sizes (arrows in A, B, and D) following the addition of IFNγ to the anterior surface for 40-70 min. Panels A and B show that IFNγ increased Jv from its control rate (≈ 2 μl•cm2•hr-1) to 14 and 12 μl•cm2•hr-1, respectively. Following addition of JAK-STAT pathway and PKA inhibitors (C and D), the IFNγ - induced absorption rates were significantly reduced to 0.2 and 7.9 μl•cm2•hr-1, respectively. Arrows indicate the boundary of the bleb for comparison with the area enclosed within the dashed line, (starting volume). Right side of figure: top panel- summary of measured Jv rates from several experiments; middle panel- movie (click here); lower panel- 3D sections of experiment summarized in B. Pseudocolor in blue indicates spatial extent of detachment at t = 0 and 40 min after addition of INFγ.

All animal experiments were conducted in compliance with the Association for Research in Vision and Ophthalmology statement. The protocol was approved by the Animal Care and Use Committee of the National Institutes of Health.

In the present experiments, we describe additional modifications of our previously published techniques 3 designed to streamline the multiple steps needed to produce consistent hfRPE primary cultures with a higher numbers of available cells per eye. Each change in the original procedure was rigorously tested in multiple physiology and molecular biology experiments to ensure that the changes did not introduce artifacts and being continually tested by many other labs using these cells. Finally, additional experiments were carried out to compare the in vitro results to similar perturbations in animal models.

This work was supported by the National Institutes of Health Intramural Research Program. 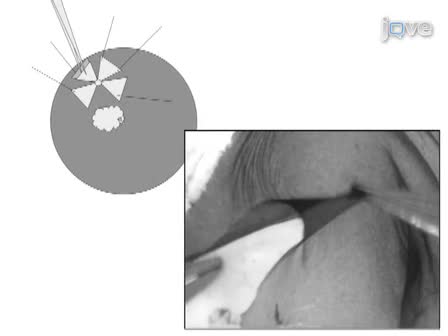