Drug self-administration and ultrasonic vocalizations (USV) are used as behavioral assessments in animal research, but rarely in combination. The purpose of this article is to describe the advantages of recording USVs during drug self-administration procedures to assess affective responses to drug experience.

Drug self-administration procedures are commonly used to study behavioral and neurochemical changes associated with human drug abuse, addiction and relapse. Various types of behavioral activity are commonly utilized as measures of drug motivation in animals. However, a crucial component of drug abuse relapse in abstinent cocaine users is "drug craving", which is difficult to model in animals, as it often occurs in the absence of overt behaviors. Yet, it is possible that a class of ultrasonic vocalizations (USVs) in rats may be a useful marker for affective responses to drug administration, drug anticipation and even drug craving. Rats vocalize in ultrasonic frequencies that serve as a communicatory function and express subjective emotional states. Several studies have shown that different call frequency ranges are associated with negative and positive emotional states. For instance, high frequency calls ("50-kHz") are associated with positive affect, whereas low frequency calls ("22-kHz") represent a negative emotional state. This article describes a procedure to assess rat USVs associated with daily cocaine self-administration. For this procedure, we utilized standard single-lever operant chambers housed within sound-attenuating boxes for cocaine self-administration sessions and utilized ultrasonic microphones, multi-channel recording hardware and specialized software programs to detect and analyze USVs. USVs measurements reflect emotionality of rats before, during and after drug availability and can be correlated with commonly assessed drug self-administration behavioral data such lever responses, inter-response intervals and locomotor activity. Since USVs can be assessed during intervals prior to drug availability (e.g., anticipatory USVs) and during drug extinction trials, changes in affect associated with drug anticipation and drug abstinence can also be determined. In addition, determining USV changes over the course of short- and long-term drug exposure can provide a more detailed interpretation of drug exposure effects on affective functioning.

Figure 1: Spectogram display of a 22-kHz range USV. Long calls in the 22-kHz range are elicited in conjunction with aversive stimuli and are thought to reflect a negative emotional state.

Figure 2: Spectogram display of 50-kHz USVs. Short "flat" and "frequency modulated" 50-kHz USVs are elicited in anticipation and during cocaine self-administration. They are associated with positive affect. 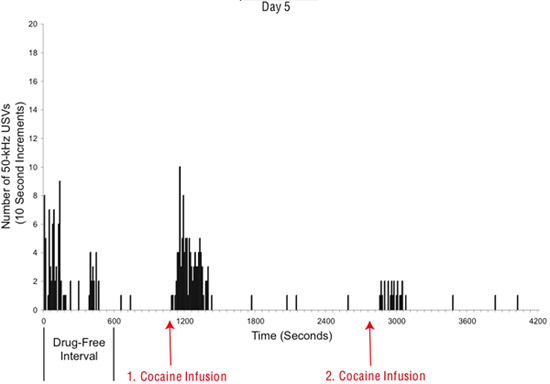 Figure 3: Cocaine-Induced 50-kHz range USVs. Graph depicts USVs (10-sec bins) elicited before and after self-administered cocaine injections (0.75 mg/kg/inj) in a representative rat on Day 5 of cocaine self-administration sessions. Immediately after placement within the operant chamber and prior to cocaine availability, cocaine-anticipatory USVs were elicited and during self-administration, cocaine-induced USVs were emitted.

Rats vocalize in ultrasonic frequencies that serve a social and communicatory function and express subjective emotional states 1,2. 22-kHz USVs are triggered by events that cause anxiety and distress, such as footshock cues, the presence of predators, aversive drugs and social defeat 2,3. Therefore, these typically long USVs (>0.3s) are thought to represent a state of negative affect of the animal. Conversely, shorter 50-kHz USVs (>0.3s) are emitted during and in anticipation of positive encounters, such as feeding, mating and social play, and have thus been linked to a positive emotional state of the animal 2,4. These calls have also been associated with reinforcing events related to the activation of the dopaminergic system 5. For example, increased 50-kHz USVs have been elicited by systemic injections of cocaine 6 or d-amphetamine 7 and environments previously paired with drugs of abuse 8-10.

It has been proposed that increases in locomotor activity in rodents relate to enhanced motivation and appetitive behavior 11-14. However, this relationship is indirect as best. By studying the emergence and persistence of USVs of particular frequencies, it is possible to gain insight to emotional effects of various aspects of drug experience.

In this experimental setup, we collected USV recordings immediately before and during drug self-administration sessions. This allowed us to examine the development of drug expectation during the non-drug interval just prior to the start of the session and to assess the direct effects of cocaine on USVs. The drug self-administration method allows rats to directly control their own drug intake levels animals and develop accurate expectations of the timing and frequency of drug administration. As a result, USVs detected during these sessions reflect accurate expectations of drug delivery. In addition, USVs can be assessed during intervals prior to drug availability (e.g., anticipatory USVs), in rats receiving experimenter-administered drugs, and during drug extinction trials. Therefore, changes in affect associated with drug anticipation, non-contingent drug administration and drug abstinence can also be determined. Analyses of USV changes over the course of short- and long-term drug exposure could provide a more detailed interpretation of drug exposure effects on affective functioning.

In addition to drug self-administration experiments, USV recordings in operant chambers can also be used for a variety of other behavioral manipulations associated with reward or aversion, such as alcohol drinking, food reinforcement, and fear conditioning and extinction procedures.

Since the MedPC software can be used to precisely manipulate experimental conditions, such as lever availability and lighting conditions, its use in combination with USV recording and analyses allows emotional effects of drug-associated cue presentations (i.e., light presentations or other sensory stimuli) and the direct effects of drug intake to be determined. Therefore, to ensure overlapping timelines of self-administration procedures and USV recordings, it is crucial that both software programs (e.g., MedPC and RECORDER) are activated simultaneously at the start of each session.

Due to the enormous amount of digital space required to store USV data (e.g., a 10-minute sound file requires approx 250 MB), caution must be taken when multiple animals are run on a single computer system at the same time. To avoid recording errors, the RAM size of the recording computer system needs be substantial (1-2 GB). Other ways to decrease recording errors include lowering the USV resolution during recording and/or reduce the number of animals run at one time. In addition, it is important that the researcher is vigilant to all aspects of data collection throughout the experimental procedure. For instance, the accumulation of a large amount of recording data on the hard drive may cause the USV recording program to pause. In this case, the recording program would need to be restarted immediately to avoid loss of USV data and de-synchronization of USVs with other behavioral measures.

Environmental conditions may influence USV calling. For example, the touch by an unfamiliar human can cause the animal to emit negative 22-kHz calls, which could be mistaken as an aversion to the experimental conditions. Therefore, intensive handling prior to experimental manipulations is an important aspect of behavioral experiments. In addition, since novel environments can also elicit non-specific USV calls, animals should be habituated to the test environment if possible. 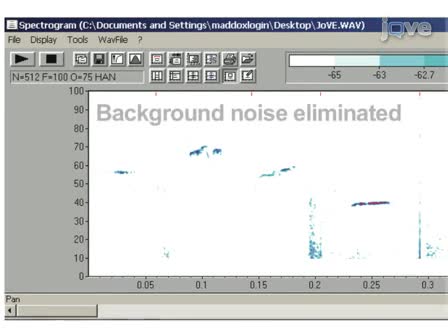