Fluorescence imaging is a promising innovative modality for image-guided surgery in surgical oncology. In this video we describe the technical procedure for detection of the sentinel lymph node using fluorescence imaging as showcased in gynecologic oncologicy. A multispectral fluorescence camera system, together with the fluorescent agent indocyanine green, is applied.

The prognosis in virtually all solid tumors depends on the presence or absence of lymph node metastases.1-3 Surgical treatment most often combines radical excision of the tumor with a full lymphadenectomy in the drainage area of the tumor. However, removal of lymph nodes is associated with increased morbidity due to infection, wound breakdown and lymphedema.4,5 As an alternative, the sentinel lymph node procedure (SLN) was developed several decades ago to detect the first draining lymph node from the tumor.6 In case of lymphogenic dissemination, the SLN is the first lymph node that is affected (Figure 1). Hence, if the SLN does not contain metastases, downstream lymph nodes will also be free from tumor metastases and need not to be removed. The SLN procedure is part of the treatment for many tumor types, like breast cancer and melanoma, but also for cancer of the vulva and cervix.7 The current standard methodology for SLN-detection is by peritumoral injection of radiocolloid one day prior to surgery, and a colored dye intraoperatively. Disadvantages of the procedure in cervical and vulvar cancer are multiple injections in the genital area, leading to increased psychological distress for the patient, and the use of radioactive colloid.

Fluorescent lymph nodes can be detected with a high signal-to-background ratio. Also, flow of ICG through lymphatic vessels can be monitored allowing real-time lymph node mapping. Results may be influenced by increasing depth of the node, possibly requiring different illumination procedures to achieve detection. Future application of specific tumor targeted fluorescent agents may provide intraoperative detection of a positive SLN with cancer cells using this technology. 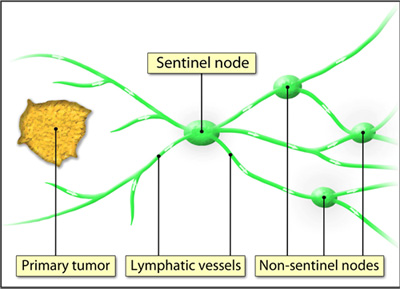 Figure 1. The sentinel lymph node (SLN) theory. The SLN is the first draining lymph node(s) from the tumor. 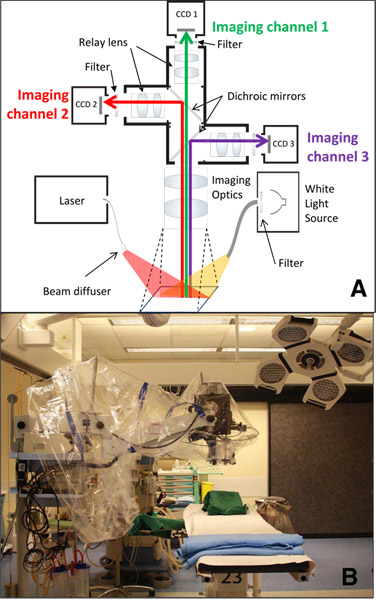 This video demonstrates the application of multispectral intraoperative fluorescence imaging technology for intraoperative detection of the sentinel lymph node (SLN) in gynecologic oncology. The methodology has certain advantages over the conventional SLN procedure. The injection takes place during the surgical procedure itself with the patient anesthetized rather than a day prior to surgery, which is more patient-friendly, especially in gynecologic cancers. Furthermore, intraoperative imaging provides the surgeon with direct visual feedback of the lymph flow and its drainage pattern to the SLN, rather than indirectly via a Geiger-teller. In cervical cancer, where lymph nodes are located deep in the pelvis, this may help improve detection.

Nonetheless, the greatest significance lies in the step-up approach towards targeted imaging. Targeted fluorescent contrast agents may be fused with tumor-specific antibodies or substrates specifically directed at tumor cells. In this manner, intraoperative fluorescence imaging has great potential to radically alter the current practice of oncologic surgery.

VN and GMvD are member of the scientific board of SurgOptix Inc. Prior to the procedure, the research protocol is approved by the local Investigational Review Board (IRB) and informed consent from the patient is acquired.

We are indebted to Mrs. Ina Wesselman for training and planning of the OR personnel.

A correction was made to Live Imaging of Dense-core Vesicles in Primary Cultured Hippocampal Neurons. There was an error with an author's name. The author name was corrected to include a first initial as follows: 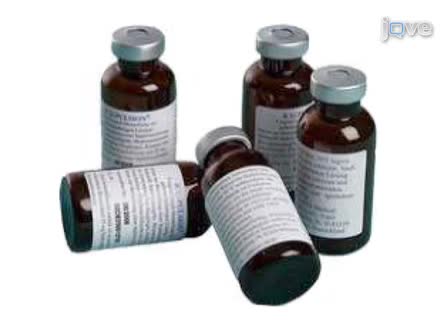