A major endocytic pathway initiates with the formation of clathrin-coated vesicles (CCVs) that transport cargo from the cell surface to endosomes1-6. CCVs are distinguished by a polyhedral lattice of clathrin that coats the vesicle membrane and serves as a mechanical scaffold. Clathrin coats are assembled during vesicle formation from individual clathrin triskelia , the soluble form of clathrin composed of three heavy and three light chain subunits7,8. Because the triskelion does not have the ability to bind to the membrane directly, clathrin-binding adaptors are critical to link the forming clathrin lattice to the membrane through association with lipids and/or membrane proteins9. Adaptors also package transmembrane protein cargo, such as receptors, and can interact with each other and with other components of the CCV formation machinery9.

Over twenty clathrin adaptors have been described, several are involved in clathrin mediated endocytosis and others localize to the trans Golgi network or endosomes9. With the exception of HIP1R (yeast Sla2p), all known clathrin adaptors bind to the N-terminal -propeller domain of the clathrin heavy chain9. Clathrin adaptors are modular proteins consisting of folded domains connected by unstructured flexible linkers. Within these linker regions, short binding motifs mediate interactions with the clathrin N-terminal domain or other components of the vesicle formation machinery9. Two distinct clathrin-binding motifs have been defined: the clathrin-box and the W-box9. The consensus clathrin-box sequence was originally defined as L[L/I][D/E/N][L/F][D/E]10 but variants have been subsequently discovered11. The W-box conforms to the sequence PWxxW (where x is any residue).

Sla1p (Synthetic Lethal with Actin binding protein-1) was originally identified as an actin associated protein and is necessary for normal actin cytoskeleton structure and dynamics at endocytic sites in yeast cells12. Sla1p also binds the NPFxD endocytic sorting signal and is critical for endocytosis of cargo bearing the NPFxD signal13,14. More recently, Sla1p was demonstrated to bind clathrin through a motif similar to the clathrin box, LLDLQ, termed a variant clathrin-box (vCB), and to function as an endocytic clathrin adaptor15. In addition, Sla1p has become a widely used marker for the endocytic coat in live cell fluorescence microscopy studies16. Here we use Sla1p as a model to describe approaches for adaptor-clathrin interaction studies. We focus on live cell fluorescence microscopy, GST-pull down, and co-immunoprecipitation methods.

1. Incorporation of a GFP tag and selectable marker in the SLA1 gene

Apply the Longtine method17 in order to fuse a GFP tag directly at the 3' end of the SLA1 gene open reading frame (Sla1p C-terminus) and simultaneously mark the gene with the E. coli kanr gene that allows for G418 selection.

2. Mutation of the variant clathrin box (vCB) in the SLA1 gene

Figure 1. Analysis of Sla1p clathrin adaptor at endocytic sites by live cell fluorescence microscopy. One frame (left) from a video and corresponding kymographs (right) of yeast cells expressing Sla1-GFP or sla1AAA-GFP carrying an LLDLQ to AAALQ mutation. Both wild type and mutant Sla1-GFP were expressed from the endogenous SLA1 locus. Endocytic sites are observed as bright spots distributed in the cell periphery (left images). The area between white lines corresponds to the region from which kymographs were generated. Movies were taken at a frame rate of 1 frame/sec. Notice the longer lifetime of Sla1-GFP in the LLDLQ to AAALQ mutant (sla1AAA) compared to wild type (SLA1).

Figure 2. Physical interaction between clathrin and the Sla1p-variant clathrin box. GST fused to Sla1p fragment aa798-813 containing the sequence LLDLQ (GST-vCB), the corresponding AAALQ mutant (GST-vCBmut), or GST alone (GST) were bound to glutathione-Sepharose beads and incubated with a cytosolic extract from wild-type yeast cells. The associated proteins were eluted and analyzed by immunoblotting (IB) for clathrin heavy chain.

Clathrin-coated vesicles (CCV) participate in endocytosis and transport from the trans Golgi network and endosomes, conserved pathways that are fundamental to eukaryotic cell biology. The approaches described in this methods paper are useful to study the molecular mechanisms responsible for CCV formation, in particular interactions between adaptor proteins and clathrin. GST-fusion protein affinity and co-immunoprecipitation assays allow testing for physical association between an adaptor (candidate) and clathrin. GFP-tagging and fluorescence microscopy imaging permit dynamic studies in live cells. Yeast cells in particular offer the advantage of easy genetic manipulation to introduce tags and mutations in the adaptor endogenous gene thus maintaining normal expression regulation of the tagged/mutated protein. Similarly, clathrin or other components of the CCV can be tagged with RFP or other fluorescent proteins to facilitate dual imaging studies in living cells16.

D.F. is supported by an NSF Bridges to the Doctorate fellowship. The microscope used in this work is supported in part by the Microscope Imaging Network core infrastructure grant from Colorado State University. Work on clathrin adaptors in the author s laboratory is supported by CSU start-up funds and American Heart Association award 09SDG2280525 to S.D. 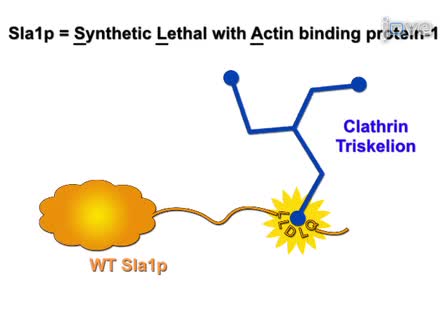