We present a protocol that uses functional magnetic resonance imaging to investigate the neural correlates of the memory-enhancing effect of emotion. This protocol allows identification of brain activity specifically linked to memory-related processing, contrary to more general perceptual processing, and can be used with healthy and clinical populations.

Emotional events tend to be better remembered than non-emotional events1,2. One goal of cognitive and affective neuroscientists is to understand the neural mechanisms underlying this enhancing effect of emotion on memory. A method that has proven particularly influential in the investigation of the memory-enhancing effect of emotion is the so-called subsequent memory paradigm (SMP). This method was originally used to investigate the neural correlates of non-emotional memories3, and more recently we and others also applied it successfully to studies of emotional memory (reviewed in4, 5-7). Here, we describe a protocol that allows investigation of the neural correlates of the memory-enhancing effect of emotion using the SMP in conjunction with event-related functional magnetic resonance imaging (fMRI). An important feature of the SMP is that it allows separation of brain activity specifically associated with memory from more general activity associated with perception. Moreover, in the context of investigating the impact of emotional stimuli, SMP allows identification of brain regions whose activity is susceptible to emotional modulation of both general/perceptual and memory-specific processing. This protocol can be used in healthy subjects8-15, as well as in clinical patients where there are alterations in the neural correlates of emotion perception and biases in remembering emotional events, such as those suffering from depression and post-traumatic stress disorder (PTSD)16, 17. 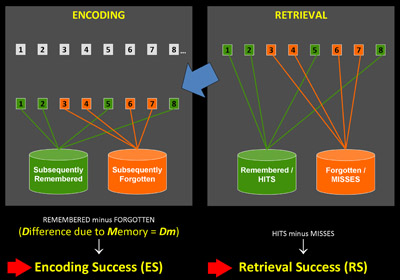 Figure 1. General Diagram of the SMP design. Brain regions whose activity during encoding is greater for subsequently remembered than for subsequently forgotten items (R > F) are associated with encoding success (ES). Similarly, if this difference in memory (Dm) 3 is measured based on comparing brain activity recorded during retrieval (Hits > Misses) it identifies regions associated with retrieval success (RS).

Several important aspects must be considered in studies using the SMP with emotional stimuli:

2. Preparing the Subject for the Scan

All Subjects provide written informed consent prior to running the experimental protocol, which has been approved by an Ethics Board.

Prior to Entering the Scanning Room

The main focus in the present protocol is on findings from a study using a cued-recall memory test 11, in which participants were provided with verbal cues for each picture and they had to provide in writing details about the pictures they could remember. However, other retrieval tasks can also be used. Of particular relevance is the so-called R-K paradigm 31, a memory recognition task in which participants categorize each retrieved item based on whether they recollect specific contextual details from encoding (Remember responses) or just have the feeling of familiarity that they encountered the items (Know responses). Used with fMRI and with emotional stimuli, this task allows not only dissociation of the neural correlates of recollection- vs. familiarity-based retrieval 32 but also identification of differential effects of emotion on these two types of retrieval, and the associated neural correlates 12.

Statistical Parametric Mapping (SPM: (http://www.fil.ion.uc.uk/spm/) in combination with in-house Matlab-based tools were used for data analysis. Pre-processing typically involves: quality assurance, image alignment, motion correction, co-registration, normalization, and smoothing (8 mm3 Kernel), but if analyses involve anatomically defined regions of interest (ROIs), increased spatial specificity is obtained if data are not smoothed and normalized (see 11). Individual and group-level statistical analyses involve comparisons of encoding/retrieval brain activity based on subsequent memory performance. The modulatory effect of emotion on memory-related activity can be seen in areas showing greater ES / Dm or RS activity for emotional than for neutral stimuli (see Figure 2). Investigations targeting MTL activity allow identification of functional dissociations, which are linked to the emotional content of stimuli (emotional vs. neutral memory; 11), the type of memory being studied (item vs. source memory; 19), or the type of retrieval task (recollection- vs. familiarity-based; 12, 36). Investigation of brain regions outside of the MTL particularly target areas in the prefrontal cortex (PFC), that are differentially involved in emotional vs. neutral memory 10, 20. 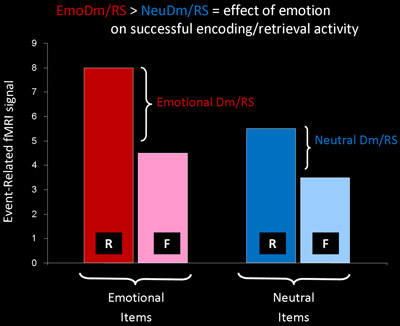 The employment of the SMP in studies of emotional memory has proved successful in shedding light on the neural correlates of the memory-enhancing effect of emotion. Providing strong support for the modulation hypothesis 37, 38, studies of memory encoding have found evidence supporting the idea that emotion enhances memory through modulatory influences from the amygdala, a brain region involved in emotion processing, on activity in memory-related brain regions, such as the medial-temporal lobe (MTL 11, see Figure 3) and the prefrontal cortex (PFC10). Moreover, studies of memory retrieval provide further evidence that the modulation hypothesis also applies to retrieval, and that various MTL regions are differentially involved in recollection- vs. familiarity-based retrieval of emotional memories 12.

Figure 3. Evidence for the Modulation Hypothesis. Supporting the modulation hypothesis, the memory-enhancing effect of emotion was associated with increased ES/Dm activity (A) in and interactions (B) between the amygdala and the MTL memory system (illustrated in C & D). The bar graphs compare the percent signal change for emotional and neutral ES / Dm, as extracted from the peak activation slice and averaged across hemispheres. The scattergrams show the co-variation between ES / Dm activity in the amygdala and the entorhinal cortex for emotional and neutral pictures. ES / Dm = Encoding Success / Difference due to Memory. From Dolcos et al. 11, with permission.

This experimental protocol allows investigation of the neural correlates of the memory-enhancing effect of emotion, by specifically separating the memory-related brain activity that is susceptible to modulation by emotion from activity in brain regions susceptible to emotion modulation during general/perceptual processing. This design has been instrumental in advancing our understanding of the neural mechanisms underlying the impact of emotion on memory, and given its versatility it is expected that SMP will remain crucial in determining how various aspects present at the time an event is experienced will later affect one’s ability to recollect and re-experience a memory for that event and the associated emotions. Furthermore, this protocol can be easily adapted to investigate the neural correlates associated with biases in emotional processing and memory that are typically found in specific clinical populations (e.g. depression and PTSD patients) 16, 17. Successful implementation of the SMP to investigate the effect of emotional memory depends on properly considering the various factors mentioned above, including the manipulations that may influence responses during encoding and/or retrieval tasks.

FD was supported by a Young Investigator Award from the National Alliance for Research on Schizophrenia and Depression and a CPRF Award from the Canadian Psychiatric Research Foundation. 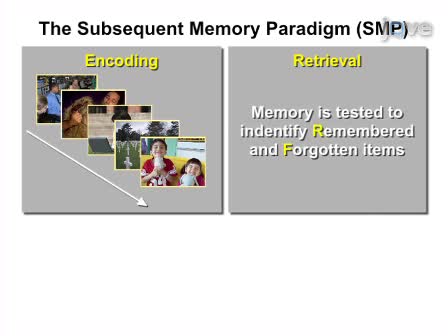