A technique for performing intravital microscopy of the inguinal lymph node (LN) is outlined. Such technique allows for real-time, in vivo study of the lymph node microvasculature and structure both during homeostasis and infection. This technique can be adapted to cell trafficking studies and to other lymph node sites.

Lymph nodes (LN's), located throughout the body, are an integral component of the immune system. They serve as a site for induction of adaptive immune response and therefore, the development of effector cells. As such, LNs are key to fighting invading pathogens and maintaining health. The choice of LN to study is dictated by accessibility and the desired model; the inguinal lymph node is well situated and easily supports studies of biologically relevant models of skin and genital mucosal infection.

The inguinal LN, like all LNs, has an extensive microvascular network supplying it with blood. In general, this microvascular network includes the main feed arteriole of the LN that subsequently branches and feeds high endothelial venules (HEVs). HEVs are specialized for facilitating the trafficking of immune cells into the LN during both homeostasis and infection. How HEVs regulate trafficking into the LN under both of these circumstances is an area of intense exploration. The LN feed arteriole, has direct upstream influence on the HEVs and is the main supply of nutrients and cell rich blood into the LN. Furthermore, changes in the feed arteriole are implicated in facilitating induction of adaptive immune response. The LN microvasculature has obvious importance in maintaining an optimal blood supply to the LN and regulating immune cell influx into the LN, which are crucial elements in proper LN function and subsequently immune response.

Intravital microscopy of the inguinal LN allows direct evaluation of microvascular functionality and real-time interface of the direct interface between immune cells, the LN, and the microcirculation. This technique potential to be combined with many immunological techniques and fluorescent cell labelling as well as manipulated to study vasculature of other LNs.

Following the equilibration period the preparation should yield a clear image that allows for identification of both the arteriole and venule that supplies the inguinal lymph node. There should be minimal adipose cells surrounding the vessels to allow for walls of the arteriole and venule to be clearly observed for the video calipers to be superimposed to calculate vessel diameter. The integral point of a successful preparation is the arteriole has a rich supply of blood moving through the lumen and that there is a significant degree of vascular tone (i.e. the arteriole has the ability to vasoconstrict and vasodilate to smooth muscle and endothelial specific agonists respectively). 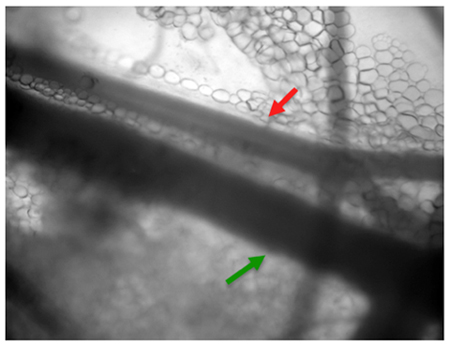 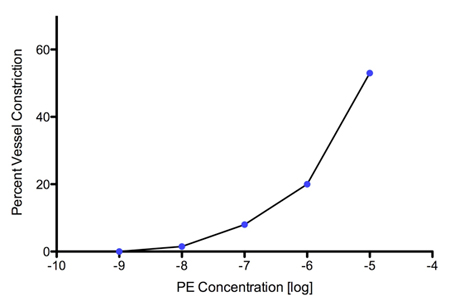 Figure 2. Normal vasoactive response to superfused phenylephrine (PE) by cumulative addition to physiological saline from the concentrations 10-9M to 10-5M. The presence of a robust vasoconstriction is suggestive of normal smooth muscle function present in the arteriole. 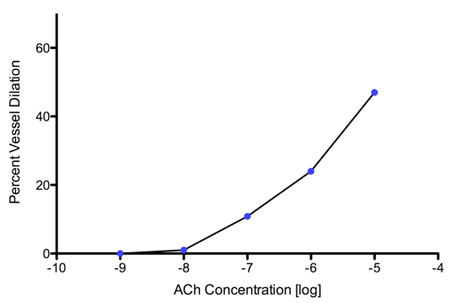 Figure 3. Normal vasoactive response to superfused acetylcholine (ACh) by cumulative addition to physiological saline from concentrations 10-9M to 10-5M. The presence of a robust vasodilation is suggestive of normal endothelial function present in the arteriole.

Intravital microscopy of the inguinal lymph node presented here provides the ability to image microvasculature of the lymph node in-vivo. Thus, it facilitates a means of direct, real-time observation. Imaging of the LN microvasculature is a unique site that allows one to study the interface between the immune response and the vasculature. Using this preparation, focus can be directed specifically at the immune response, alterations in the vasculature, or at interaction between the two.

As with all experimental approaches, standard intravital microscopy has both advantages and limitations. Standard IVM, such as the preparation described here, can easily be modified, and has been previously demonstrated by the authors to allow epifluorescent microscopy via the introduction of fluorescent tracer dyes or labeled cell populations. Although standard IVM does not give the possibility of three dimensional imaging and tracing such as would be given by two-photon microscopy or angiography, cell tracking is still achieved in two dimensions allowing cell-to-cell and cell-to-vasculature interaction to be observed and quantified and in conjunction with in-vivo administration and subsequent staining with fluorescent antibodies can be used to give data on protein/marker expression in real-time.

Notably, alternative imaging techniques require a static environment for images; clamping of the surgical area or the addition of a coverslip on a flat preparation is frequently needed. This limits, if not eliminates, the ability to actively perfuse vascular or other mediators over the preparation to evaluate vascular integrity and physiology etc. or the use of other techniques such as conducted vasodilation experiments within the IVM preparation. Furthermore, standard IVM does not require a completely flat preparation and is not affected by motion, such as that generated by the breathing of the animal. This allows standard IVM to be used in more surgical areas with greater reproducibility. This is exemplified by the inguinal lymph node preparation described here. Given the size and shape of the lymph node, the preparation can not be made flat without injuring the tissue and the location of the node gives rise to significant motion due to animal respiration. Such issues would be difficult to overcome by other methods, but are easily dealt with using the standard IVM preparation described.

In summary, the preparation detailed above can be combined with any number of other biochemical, vascular, and/or immunological techniques such as transfer of subsets of activated or labeled cells, induction of hypoxia, and over-expression of depletion of vascular mediators. However, additional applications are dependent on the health of the initial preparation. Therefore, it is vital to always test the health of the vasculature being imaged and evaluated. Key points to achieving a health preparation are ensuring the preparation is constantly perfused with equilibrated PSS at body temperature and minimizing contact and stress placed on the surgical area during surgery.

This work is funded by the Canadian Institutes of Health Research, Canadian Foundation for Innovation, University of British Columbia Centre for Blood Research and University of Northern BC. 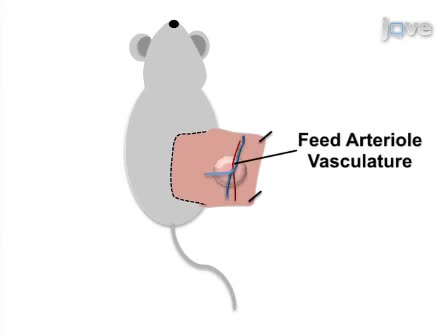