Here we present the methodology for fast and high resolution fluorescent voltage-sensitive dye imaging of detailed activity of neurons in the crab stomatogastric ganglion.

Voltage-sensitive dye imaging of neurons is a key methodology for the understanding of how neuronal networks are organised and how the simultaneous activity of participating neurons leads to the emergence of the integral functionality of the network. Here we present the methodology of application of this technique to identified pattern generating neurons in the crab stomatogastric ganglion. We demonstrate the loading of these neurons with the fluorescent voltage-sensitive dye Di-8-ANEPPQ and we show how to image the activity of dye loaded neurons using the MiCAM02 high speed and high resolution CCD camera imaging system. We demonstrate the analysis of the recorded imaging data using the BVAna imaging software associated with the MiCAM02 imaging system. The simultaneous voltage-sensitive dye imaging of the detailed activity of multiple neurons in the crab stomatogastric ganglion applied together with traditional electrophysiology techniques (intracellular and extracellular recordings) opens radically new opportunities for the understanding of how central pattern generator neural networks work.

The detailed steps of the STNS dissection and preparation, including the desheathing of the stomatoastric ganglion (STG), are presented in the JoVE article by Guttierez and Grashow1. All experiments were carried out in accordance with the European Communities Council Directive of 24th November 1986 (86/609/EEC). Figure 1A shows a schematic diagram of the STNS and Figure 1B shows a typical desheathed STG having its neurons arranged as a flat semicircle in the posterior part of the ganglion.

The Petri dish with the STNS is fixed to the operating platform of the imaging microscope (BW51 WI; Olympus, Tokyo, Japan) with modelling clay. Both, the microscope stage and the microscope are mounted on a vibration isolated table (Scientifica, Uckfield, UK) to prevent movement artefacts during the optical recording. The motor patterns generated in the stomatogastric ganglion (STG) are monitored using extracellular recordings2-4. This is done through the following steps:

2. Preparation of the Dye Solution

We used the fluorescent voltage-sensitive dye Di-8-ANEPPQ (Cambridge Bioscience)5, which has a double positive charge that facilitates the loading of the dye through microelectrodes by using positive current pulses. The dye solution should be protected from light as much as possible. The dye solution is prepared as follows:

We used sharp microelectrodes to load the neurons with the dye. To check the dye loading we use the MiCAM02 imaging system (SciMedia, Tokyo, Japan)6. The imaging system has two CCD cameras: the HR camera has a larger sensor chip (6.4 mm x 4.8 mm) providing better spatial resolution with the best temporal resolution being 1.4 ms, the HS camera has a smaller (2.9 mm x 2.1 mm) but faster sensor chip allowing faster imaging having 0.7 ms as its best temporal resolution. The steps of the dye loading are as follows:

5. Analysis of the Optical Imaging Data

To analyse the imaging data we used the BVAna software (version 10.08; SciMedia Ltd, Tokyo, Japan) associated with the MiCAM 02 imaging system. The software supports the visualisation of the imaging data and provides a range of analysis tools as well. The steps of the data analysis and interpretation are as follows:

Figure 2 shows the simultaneous recording of two neurons (LP, lateral pyloric neuron; PD, pyloric dilator neuron) in the pyloric central pattern generator of a crab STG together with the recording from the lvn. The optical recordings of the LP and PD neurons identified on the basis of their intracellular recordings show that indeed these match well with the extracellular recordings corresponding to LP and PD neurons. There is a consistent 12 ms delay between the optical and lvn recordings of spike peaks (see inset of Figure 2) due to the axonal transmission delay between the ganglion and the extracellular recording site. The presented data also shows that the neural activity in the soma that corresponds to spikes of the recorded neurons is clearly detectable. 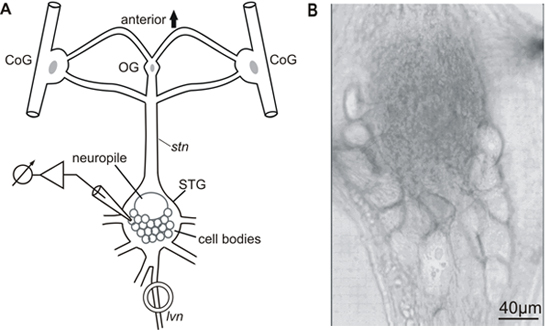 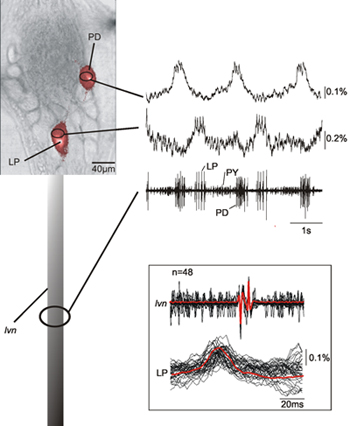 Figure 2. Simultaneous single-sweep recording of a PD and an LP neuron together with the recording of the lvn. The data shows that that the optical and nerve recordings match very well and that we can identify the neural activities corresponding to spikes recorded form the nerve. The inset shows an overlay of several sweeps of LP action potentials - both optically and electrically recorded - and their average demonstrating the match between optically and electrically recorded activities. Due to the fact that our optical recording method does not filter out the low frequency components of the data we are also able to record slow membrane potential changes characteristic for PD and LP neurons14.

The voltage sensitive dye imaging8,9 of STG neurons in combination with traditional electrophysiology methods (intra- and extracellular electrode recordings) allows an improved understanding of how this small, well-known and still complex neural system works. The STG is a prototype of central pattern generator (CPG) neuronal networks (it includes the pyloric and gastric mill rhythm networks)10,,11, thus a better understanding of the emergent functional properties of the STG will also help to understand how in general CPG networks generate their network level functionality. CPG networks play a critical role in motor control12 and also in higher cognitive functions13, consequently the better understanding of their emergent properties may have a major impact in many areas of neuroscience.

We acknowledge support by the School of Computing Science and Faculty of Science, Agriculture and Engineering of Newcastle University, by the Ulm University, and by the SciMedia Ltd (Tokyo, Japan). 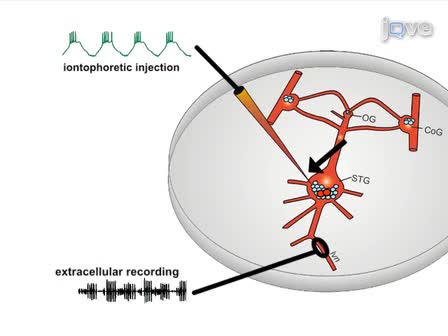