We describe a minimally-invasive and painless method to measure canine hindlimb muscle strength and muscle response to repeated eccentric contractions.

We describe a minimally-invasive and reproducible method to measure canine pelvic limb muscle strength and muscle response to repeated eccentric contractions. The pelvic limb of an anesthetized dog is immobilized in a stereotactic frame to align the tibia at a right angle to the femur. Adhesive wrap affixes the paw to a pedal mounted on the shaft of a servomotor to measure torque. Percutaneous nerve stimulation activates pelvic limb muscles of the paw to either push (extend) or pull (flex) against the pedal to generate isometric torque. Percutaneous tibial nerve stimulation activates tibiotarsal extensor muscles. Repeated eccentric (lengthening) contractions are induced in the tibiotarsal flexor muscles by percutaneous peroneal nerve stimulation. The eccentric protocol consists of an initial isometric contraction followed by a forced stretch imposed by the servomotor. The rotation effectively lengthens the muscle while it contracts, e.g., an eccentric contraction. During stimulation flexor muscles are subjected to an 800 msec isometric and 200 msec eccentric contraction. This procedure is repeated every 5 sec. To avoid fatigue, 4 min rest follows every 10 contractions with a total of 30 contractions performed.

1. Setting up for the experiment

It is assumed that the hardware is connected to the computer that runs the DMC software, and that the system is calibrated. The software may be revised from time to time; therefore, instructions are provided below relevant to the current software version that we use. When the software is opened, it is already running.

The user can initially write a protocol in DMC (e.g., to stimulate at 50 Hz for 1.5 s to produce an isometric tetanus) and the protocol can then be saved for subsequent use. We use two standard protocols: (1) isometric contraction protocol (e.g., twitch or tetanus); and (2) eccentric stretch-injury protocol. We start with the isometric contraction protocol for the twitch. To optimize the twitch, the Monitor Outputs screen is used; torque generated during the twitch can be observed as the electrodes are moved. When the maximum twitch response is achieved, the data are collected by returning to the main screen (select Continue) and selecting Begin and Done. Files are saved from the Save As pop-up window. With the electrodes maintained in the same position, a tetanus (50 Hz) is then collected and saved. When all isometric contractions are completed, the eccentric stretch-injury protocol can be loaded and run. Because there are a series of contractions to be executed in this protocol (10 contractions), on the main screen the Run One button is selected to reveal Run All status. Now when Begin is selected, a Run All Protocols pop up window appears that asks for the root file name and the directory into which the files are to be saved. Then, Start Protocol Series Test and Done are selected to initiate the eccentric protocol. The files are saved automatically into the selected Directory.

2. Positioning the animal in the physiology rig 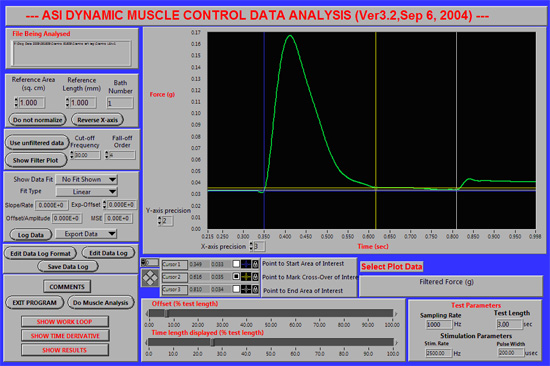 Figure 1. Placement of the blue (#1), yellow (#2) and white (#3) cursors to analyze a twitch. A representative screen shot of the DMA software is shown for tibiotarsal extension twitch in a healthy 13 kg dog. Note that for subsequent analysis performed by the software, the data are exported to a spreadsheet, and the force output (shown in the figure as Force (g) can be converted to torque (N-m).Torque is calculated by the product of force and lever arm distance (in this the distance = length measured from axis of rotation to lateral digit of the paw). 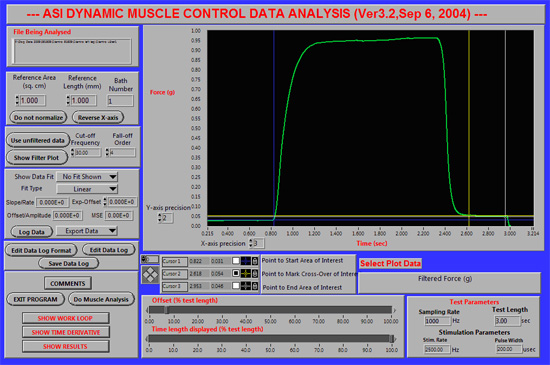 Figure 2. Placement of the blue (#1), yellow (#2) and white (#3) cursors to analyze a tetanus. A representative screen shot of the DMA software is shown for tibiotarsal extension tetany, same animal as shown in Fig 1. 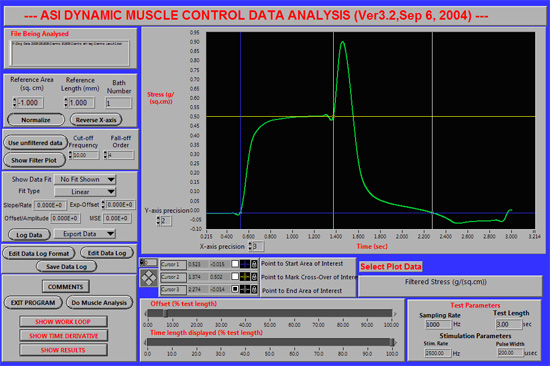 This protocol is used to assess large animal muscle function in vivo to analyze, document and determine efficacy of treatment interventions or to document biological features of disease progression.1-6 Animal positioning, limb placement and electrode placement are key variables that significantly impact results. In a preliminary study, mean alveolar concentration (MAC) values for isoflurane did not significantly affect force measurements (Schueler RO, Koch H, Kornegay JN, unpublished data, 1993).Hardware and software are commercially available and methods well-established.7,1,2,8,4,9-11,6,12 It is recommended that users obtain and use the software and equipment described above when following this protocol.

Modifications: limitations of the current servomotor include body mass of about 23 kg and paw length of 20cm. Note that the torque limit is ~8 N-meters for the torque transducer (model 310LR) described here. This value may be exceeded by normal dogs at 6 months or older. Possible modifications to the current protocol include updating the software and to increase the torque range of the transducer. Aurora Scientific manufactures a limb positioning device for large animals that can be substituted for the stereotactic frame used in the current protocol. This method has successfully been applied to other animal models, including non-human primates.

The production of this video-article was sponsored by Aurora Scientific, Inc. 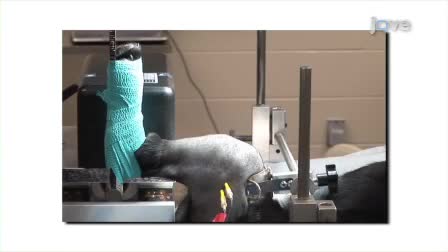