This article describes an electrophysiological method for isolating chemical stimulation to individual sensilla via extracellular, tip-recordings under mineral oil.

We describe a modification of an existing tip-recording technique1,2 for electrophysiologically investigating short, peg-like sensory sensilla3,4. On the mid-ventral surface of all scorpions are two appendages called pectines, which have dense fields of mechano- and chemosensory peg sensilla5,6. One method for assessing chemoresponsiveness of these sensilla uses a tungsten electrode for extracellularly recording neural activity within a sensillum as a volatile odorant is introduced to the sensory field5,7. The limitations of this method include slow data collection and uncontrolled stimulant introduction to, and removal from, the peg field. To overcome these limitations, we developed a new tip-recording technique that uses nonpolar mineral oil as a medium through which to deliver water-based tastants to individual peg sensilla8,9. We have successfully applied this method to obtain sensillar chemoresponses to citric acid, ethanol, and salt. Here we describe the experimental protocol for such a study9. We think this new method may be useful for studying the response properties of other arthropod chemosensory systems, including those of insects10, 11 and crustaceans12.

3. Preparing an Animal for Multiple Days of Experimentation

Depending on the recording equipment used (e.g. the particular amplifier, digitizing hardware, etc.), a representative result is an extracellular recording with a S:N ratio of at least 3:1.

Successful construction of the mineral oil chamber is necessary for isolating chemical stimulation to individual sensilla, as it provides a medium for delivering polar (water-based) chemical tastants8. If there is too little oil or none at all, the stimulant solution will spread from the recorded sensillum to its neighboring sensilla, which is likely to cause a prolonged, uncontrolled bout of chemical stimulation8.

The protocol above describes how to prepare a desert grassland scorpion (Paruroctonus utahensis) for electrophysiological study. Specifically, we show how to build a chamber for controlled extracellular tip-recordings of pectinal chemosensory neurons under oil. Because oil and water do not mix, it is possible to isolate chemical stimulation (with water-based stimulants) to single sensilla. It should be stressed that P. utahensis, is a relatively small animal (≈ 2.5-5 cm) and applying this protocol to larger animals may require many size adjustments, such as the size of the animal's platform, chamber, and amount of oil applied. We recommend conducting pilot studies to test the minimum amount of oil necessary for controlled delivery of water-based chemical stimulants.

Furthermore, we found no effect of oil on the baseline neural activity within pectinal sensilla8. This should be confirmed for other model systems as well, prior to assessing chemoresponsiveness.

This method may be used in conjunction with another method to test for chemoresponse interaction effects among sensilla in the sensory field. For example, it is possible to tip-record (under oil) from one sensillum as we base-record (via a tungsten electrode) from a neighboring sensillum9. Such a recording configuration may be used to assess whether or not chemically stimulating one sensillum affects the neural activity of the base-recorded sensillum. To date, no one has tested this for scorpion pectinal sensilla, and it remains an open question for other chemosensory systems as well.

To summarize, we think the tip-recording method under oil advances the scope of electrophysiological investigations into the neural basis of arthropod gustation. In this manuscript, we provide a protocol for preparing animals for this method, and we hope it provides a firm foundation for further study of peripheral sensory nervous systems.

We thank the Life fund, University of Oklahoma Undergraduate Research Opportunities Program, and the Department of Zoology for funding this work. We also thank Dr. Mariëlle Hoefnagels for editorial help. 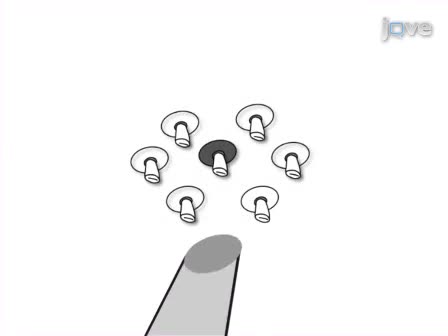