The effect of weightlessness and hypergravity on both hemodynamic and electrophysiological processes in the brain is going to be followed during parabolic flight by EEG and NIRS techniques. A feasibility study of a more complex experiment, which is planned to carry out during medium- and long-term space flight.

Previous studies of cognitive, mental and/or motor processes during short-, medium- and long-term weightlessness have only been descriptive in nature, and focused on psychological aspects. Until now, objective observation of neurophysiological parameters has not been carried out - undoubtedly because the technical and methodological means have not been available -, investigations into the neurophysiological effects of weightlessness are in their infancy (Schneider et al. 2008).

While imaging techniques such as positron emission tomography (PET) and magnetic resonance imaging (MRI) would be hardly applicable in space, the non-invasive near-infrared spectroscopy (NIRS) technique represents a method of mapping hemodynamic processes in the brain in real time that is both relatively inexpensive and that can be employed even under extreme conditions. The combination with electroencephalography (EEG) opens up the possibility of following the electrocortical processes under changing gravity conditions with a finer temporal resolution as well as with deeper localization, for instance with electrotomography (LORETA).

Previous studies showed an increase of beta frequency activity under normal gravity conditions and a decrease under weightlessness conditions during a parabolic flight (Schneider et al. 2008a+b). Tilt studies revealed different changes in brain function, which let suggest, that changes in parabolic flight might reflect emotional processes rather than hemodynamic changes. However, it is still unclear whether these are effects of changed gravity or hemodynamic changes within the brain. Combining EEG/LORETA and NIRS should for the first time make it possible to map the effect of weightlessness and reduced gravity on both hemodynamic and electrophysiological processes in the brain. Initially, this is to be done as part of a feasibility study during a parabolic flight. Afterwards, it is also planned to use both techniques during medium- and long-term space flight.

It can be assumed that the long-term redistribution of the blood volume and the associated increase in the supply of oxygen to the brain will lead to changes in the central nervous system that are also responsible for anaemic processes, and which can in turn reduce performance (De Santo et al. 2005), which means that they could be crucial for the success and safety of a mission (Genik et al. 2005, Ellis 2000).

Depending on these results, it will be necessary to develop and employ extensive countermeasures. Initial results for the MARS500 study suggest that, in addition to their significance in the context of the cardiovascular and locomotor systems, sport and physical activity can play a part in improving neurocognitive parameters. Before this can be fully established, however, it seems necessary to learn more about the influence of changing gravity conditions on neurophysiological processes and associated neurocognitive impairment.

Mapping the transition from the hypergravity phase to weightlessness we were able to observe increased brain cortical activity in the frontal cortex and decreased activity in the temporal and occipital cortex 2000 - 2350 ms after the onset of weightlessness (Figure 2a,b). sLORETA allowed localizing this increased frontal activation in Brodmann area 9 of the dorsolateral prefrontal cortex, which is known to be involved in executive functions with the integration of sensory and mnemonic information in the course of motor planning, organization and regulation, (Figure 3a, b). In addition, subject 2 showed an increase in Brodmann area 6, the premotor cortex, which plays a role in sensory guidance in the course of body stabilization (see Figure 3b).

The cognitive task resulted in decreased performance scores for both participants in normal gravity during the flight compared to a preflight session. Only subject 2 showed a decreased score in weightlessnes (Figure 5).

Figure 1. Parabolic flight sequence. Order of tasks and measurements during the flight; number of parabolas are indicated in grey, numbers with apostrophe indicate the length of longer breaks between parabolas. 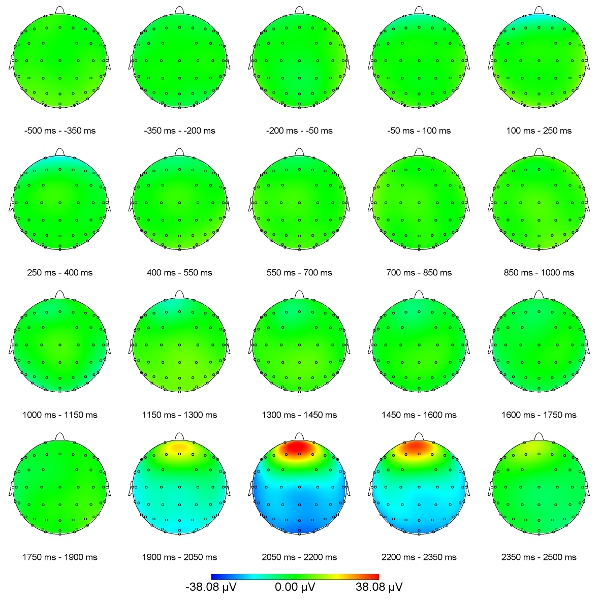 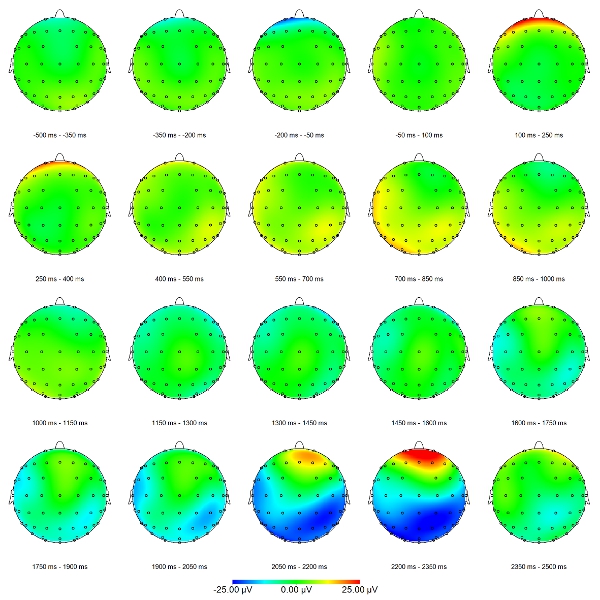 Figure 2 Mapping view of two subjects over the timeframe of 500 ms before weightlessness (in hypergravity) until 2500 ms in weightlessness. View is from above the head; little circles indicate electrode positions, blue color decreases and yellow to red color increases of electrocortical activity in micro Volt. 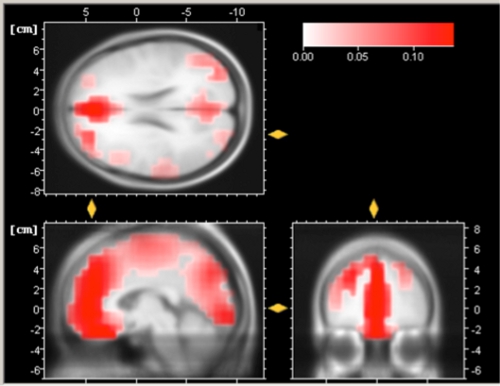 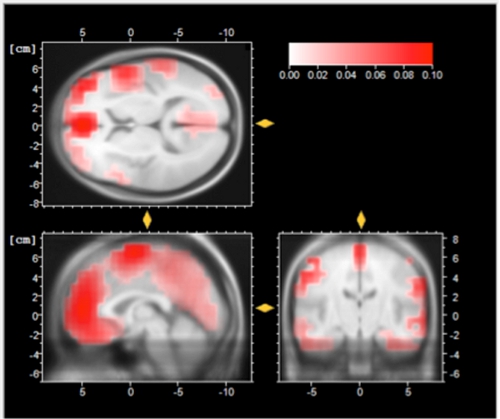 Figure 3. Three LORETA views (top: from above, bottom left: from the left side, bottom right: from the back) of two subjects over the timeframe of 2000 ms until 2350 ms after onset of weightlessness. Red color indicates increased brain activity. 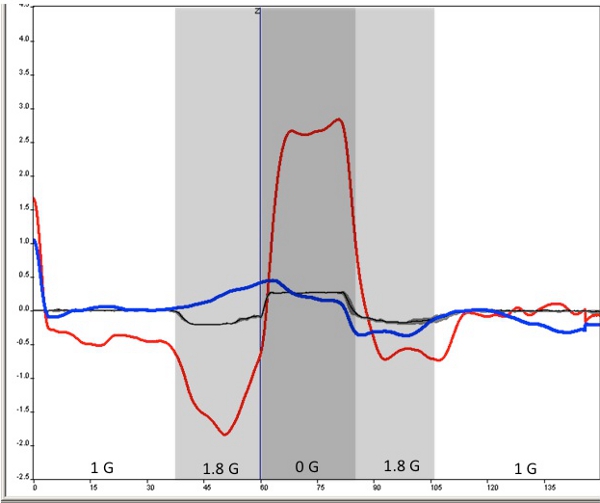 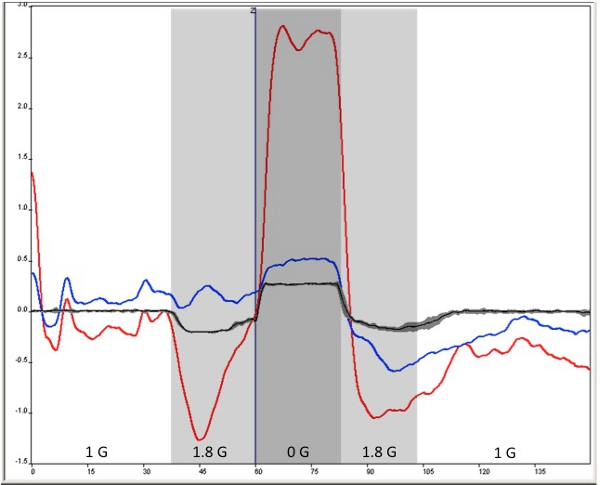 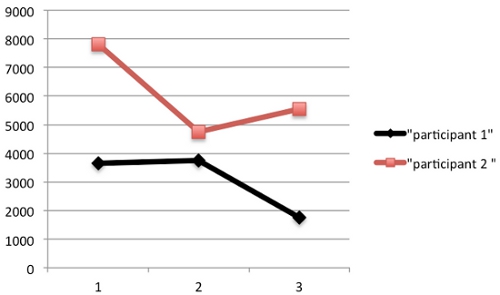 Figure 5. Performance score of cognitive task of participant 1 (blue trace) and 2 (red trace) for the measurements training before flight and inflight in weightlessness (0G) and normal gravity (1G).

Due to missing brain-imaging methods under extreme conditions so far the underlying neurophysiological processes for impairment in cognitive performance and mental state have not been evaluated. In this paper we were able to display changes in brain cortical activity and oxygenation level in the course of a parabolic flight and to localize these changes within the brain using EEG combined with LORETA and NIRS. As expected, we found an increase in electrocortical activity during weightlessness, which was localized in frontal brain regions (Brodmann areas 9+6). Results indicate that approximately 2000 ms after the transition brain cortical activity is altered mainly in frontal brain regions. It might be assumed that this increased activity in Brodmann area 6 and 9 reflects the mechanisms of the brain detecting and processing changed gravity conditions in order to keep body stability as well as motor ability in altered gravity conditions.

Regarding hemodynamic changes, NIRS revealed that the O2Hb of the frontal brain dramatically decreases in the first hypergravity phase and increases in weightlessness, whereas, HHb showed only moderate changes. Accordingly this effect cannot be attributed to a shift of blood volume solely. More likely this seems to reflect a kind of cerebral autoregulation, especially as the increase of O2Hb occurs long before the transition from 1.8 G to 0G (especially in figure 4). In contrast O2Hb and HHB both decrease in the second hypergravity phase.

The results of the cognitive task indicate no clear impairment during normal gravity or weightlessness inflight compared to a preflight session. Based on the results of two subjects no clear statement is possible whether parabolic flights or weightlessness together with its increase in brain activity and oxygenation level have an influence on cognitive performance. Earlier studies give reason to believe that in this context stress might also play a role (Schneider et al. 2007), nevertheless no changes in cortisol concentration could be obtained for both subjects. Further data is needed to validate these findings and to allow correlation of changes in brain cortical activity, hemodynamic changes as well as cognitive performance.

This paper intended to show that monitoring of local changes in brain cortical activity and oxygenation level throughout different phases of changed gravity is possible by using EEG in combination with NIRS and LORETA. These results are a success for space research and will enable displaying complex and local changes of brain cortical activity in hypergravity or weightlessness and correlating mental or motor test with objective changes in the brain. The next step is to apply this method during long-term space missions.

We would like to thank Brain Products GmbH for providing their equipment, expertise and help. This study was funded by the Federal Ministry of Economics and Technology via a grant from the German Space Agency (DLR) 50WB0819. 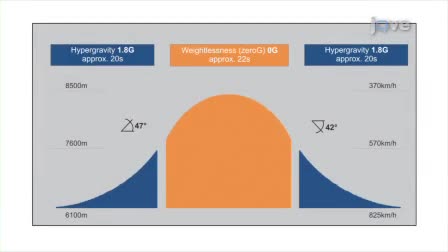