Working safely and humanely with research rodents requires a core competency in handling and restraint methods. This article will present the basic principles required to safely handle and effectively administer compounds to mice and rats.

Being able to safely and effectively restrain mice and rats is an important part of conducting research. Working confidently and humanely with mice and rats requires a basic competency in handling and restraint methods. This article will present the basic principles required to safely handle animals. One-handed, two-handed, and restraint with specially designed restraint objects will be illustrated. Often, another part of the research or testing use of animals is the effective administration of compounds to mice and rats. Although there are a large number of possible administration routes (limited only by the size and organs of the animal), most are not used regularly in research. This video will illustrate several of the more common routes, including intravenous, intramuscular, subcutaneous, and oral gavage. The goal of this article is to expose a viewer unfamiliar with these techniques to basic restraint and substance administration routes. This video does not replace required hands-on training at your facility, but is meant to augment and supplement that training.

1. Safe Restraint and Gentle Handling of Animals is a Key Part of Experimental Procedures

When animals are handled correctly, there is a minimum of stress for both animal and handler. Handlers do not get bitten or scratched, and animals are handled humanely and competently. Compounds are administered via the correct route with minimal damage to tissue and as little discomfort to the animal as possible.

If investigators are new to handling animals, working with a small stuffed animal may be helpful. There are also animal simulators available for some techniques, such as the Koken rat. For many investigators, there is little chance to gain familiarity with needles and syringes before working with animals. Representative parts of a needle and syringe are illustrated in Figure 1A and 1B. Before injecting animals for the first time, it can be useful to practice injecting before working with animals. Very fine needles, such as 28 and 30 g, are easy to damage. If withdrawing substances from multi-use vials, use a larger needle for that purpose and then replace it with the smaller gauge needle for injection. A burred needle is seen in Figure 1C. Basic safety precautions should be taken when working with needles, such as not recapping used needles by hand. Figure 1D shows a needle recapper in use. This can be valuable to investigators who need to remove needles to, for example, express blood from a syringe without the hemolysis seen when blood is pushed through a needle.

Figures 2 and 3 illustrate landmarks for intraabdominal injection and the typical structure of the tail, illustrating the targets for injection. Figure 4 provides examples of proper sizing of gavage needles. Gavage needles should reach from the mouth of the animal to right below the last rib. 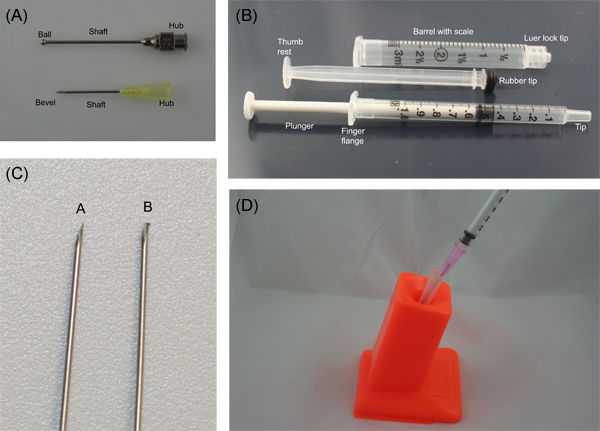 Figure 1. A) Needle and B) syringe parts, labeled. C) Burr on needle caused by repeated placement of the needle into a multi-use vial. D) Needle recapper in use. 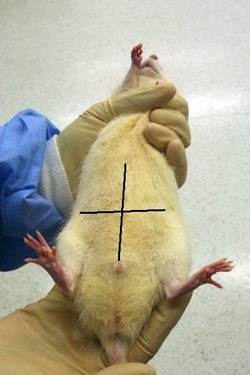 Figure 2. Quadrants of the ventral abdomen. Only inject into the lower two quadrants, preferentially the right lower quadrant. 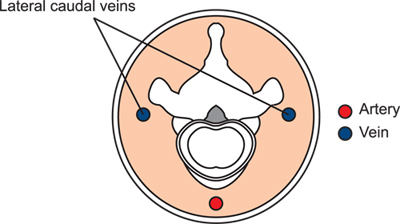 Figure 3. Schematic of the tail in cross-section, illustrating the relationship of the arteries and veins to the bony and tendenous structures.

Table 1. Recommended doses and needle sizes for various routes of compound administration in mice and rats.

Training in animal-related procedures is vital to the success of research. To perform most experiments, animals must be handled by research staff, and the better the animal handling, the less stressed the animal 3. Accustoming animals to gentle human contact can reduce stress and make animals more tractable research subjects 4,5. Handling stress has been shown to affect some types of research 6 and it is possible it can affect others as well. Restraint of rodents should be accomplished with careful, but firm handling (a tentative grip is likely to result in injury to rodent and handler) and should be for the shortest duration practical. Restraint methods are usually chosen based on the size of the animal or the access sought. For example, handling adult rats by the scruff, although possible, is often met with strong resistance by the rat, especially if the handler is inexperienced. Holding a mouse or rat by hand can make access to the tail veins difficult and a restraint device is often chosen to keep the animal as still as possible.

When researchers handle animals, they are often seeking to administer a compound or biologic for further study. The route of administration of substances can affect absorption, bioavailability, and suitability for a particular experiment. Familiarity with various routes should provide researchers with the ability to administer their substance in the best way possible for their research. For example, a route that promotes rapid absorption of a substance, such as intravenous or intraperitoneal, should not be used if the researcher wants to administer the substance in a slower-acting manner. Recent reviews of some of these techniques and considerations for volume, equipment, and solute may be found in two papers by Turner et al. 1,7

Whenever substances are to be administered to laboratory rodents, consideration should be given to the proper size of equipment and volume of substance (outlined in Table 1). Improperly sized equipment or large volumes may result in discomfort, injury, or death of the animal. Generally, substances administered parenterally are sterile, except where the research goals would make this impossible (i.e., bacterial studies). Compounds and biologicals should be in a solute or vehicle that will have the least effect on the animal. A physiologic pH (7.3 -7.4) is generally well-accepted, especially for subcutaneous, intramuscular, and intraperitoneal routes. Non-physiologic pH levels in substances administered by these routes may result in pain or necrosis and tissue damage. Wider ranges of pH are tolerated with intragastric and intravenous routes 7. In small rodents, another important consideration is the possibility of chilling if large volumes of room-temperature fluids are given. If fluids are being administered intravenously or intraperitoneally, especially in support of an ill animal, they should be warmed to body temperature (37 °C).

In rodents, the intranasal route is typically used to study substances introduced to the lungs via a more "natural"; method than intratracheal instillation. Mice and rats are obligate nose-breathers, so inducing them to inhale very small amounts of fluid is not difficult, even in conscious animals. Since the nasal mucosa is well-supplied with blood vessels, intranasal administration of some substances can be similar to intravenous administration. This route is not recommended in animals with rhinitis, however, as that may compromise absorption. Attempts to administer large volumes by the intranasal route may result in dyspnea or drowning of the animal.

Although both the subcutaneous and intradermal routes involve the skin, there are differences between the bioavailability of substances placed in the skin vs the subcutis. Subcutaneous administration is often considered a "deposition" route, with slower absorption than other routes, such as intravenous or intraperitoneal. Intradermal administration is used for very small volumes of substances, typically immunostimulatory substances such as adjuvant-antigen mixtures. In both cases, the substances administered should be of physiologic pH and non-irritating. Intradermal or subcutaneous injections should not be performed in the scruff, since this is a commonly used site for restraining the rodent.

The intragastric or oral gavage route is often used to mimic a common dosing route in humans. It also allows for precise dosing of substances when compared to oral administration through food or water. Bioavailability of compounds administered via gavage will vary based on the fed/fasted state of the animal, as well as the solute or vehicle of the compound or biological. Gavage or feeding needles should be of the appropriate size for the animal being used, and should be cleaned between animals, if disposable gavage needles are not practical. Injuries caused by gavage are not uncommon and include deposition of the substance into the lung or rupture of the stomach or esophagus. Training should be supervised by an experienced party and undertaken on euthanized animals first, then anesthetized animals (that will be euthanized) before gavage on awake animals is attempted. First gavage attempts on awake animals should involve average-sized animals and small volumes of a substance, such as saline, that will not cause injury if the procedure goes awry. Animals should be closely assessed for signs of distress, such as gasping, turning blue, bleeding, or excess salivation ,after gavage and euthanized if necessary. If euthanasia is required, the animal should be necropsied to determine why the gavage procedure failed.

The authors are employees of Charles River.

The research presented here was supported by Charles River. 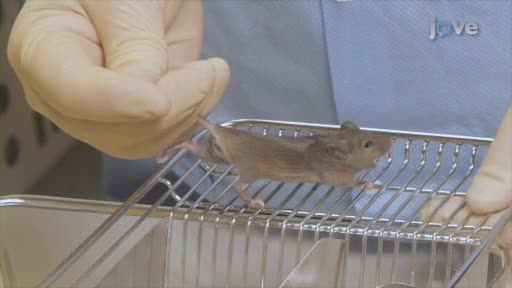