Voice disorders are debilitating in aging and Parkinson disease. The ultrasonic vocalizations of rats, also affected by these conditions, can be used to study these voice disorders, their neural substrates, and the nature of functional recovery with behavioral intervention.

Voice deficits are a common complication of both Parkinson disease (PD) and aging; they can significantly diminish quality of life by impacting communication abilities. 1, 2 Targeted training (speech/voice therapy) can improve specific voice deficits,3, 4 although the underlying mechanisms of behavioral interventions are not well understood. Systematic investigation of voice deficits and therapy should consider many factors that are difficult to control in humans, such as age, home environment, age post-onset of disease, severity of disease, and medications. The method presented here uses an animal model of vocalization that allows for systematic study of how underlying sensorimotor mechanisms change with targeted voice training. The ultrasonic recording and analysis procedures outlined in this protocol are applicable to any investigation of rodent ultrasonic vocalizations.

The ultrasonic vocalizations of rodents are emerging as a valuable model to investigate the neural substrates of behavior.5-8 Both rodent and human vocalizations carry semiotic value and are produced by modifying an egressive airflow with a laryngeal constriction.9, 10 Thus, rodent vocalizations may be a useful model to study voice deficits in a sensorimotor context. Further, rat models allow us to study the neurobiological underpinnings of recovery from deficits with targeted training.

To model PD we use Long-Evans rats (Charles River Laboratories International, Inc.) and induce parkinsonism by a unilateral infusion of 7 μg of 6-hydroxydopamine (6-OHDA) into the medial forebrain bundle which causes moderate to severe degeneration of presynaptic striatal neurons (for details see Ciucci, 2010).11, 12 For our aging model we use the Fischer 344/Brown Norway F1 (National Institute on Aging).

An ultrasonic microphone mounted above the male's home cage records the vocalizations. Recording begins after the female rat is removed to isolate the male calls. Vocalizations can be viewed in real time for training or recorded and analyzed offline. By recording and acoustically analyzing vocalizations before and after vocal training, the effects of disease and restoration of normal function with training can be assessed. This model also allows us to relate the observed behavioral (vocal) improvements to changes in the brain and neuromuscular system.

Ultrasonic vocalizations of rats are affected by physiological changes associated with aging and 6-OHDA Parkinson disease models. 13 Typically, we see a reduction in quality of the ultrasonic vocalizations characterized by a reduction of the following quantitative acoustic parameters: bandwidth, peak frequency, duration, and intensity. Figure 6 shows the frequency modulated vocalizations of a rat in the PD model at three different time points: baseline, after induction of PD, and after vocalization training. In the PD condition, the call shows a reduction in bandwidth, duration, and intensity. Additionally, the frequency modulation has become irregular.

Figure 1. Number of vocalizations per session (target met by all rats each week) and vocalization rate (mean and standard error shown) both increase over a 6-week training period in a group of both young (9 mo) and old (32 mo) Fischer 344/Brown Norway F1 rats.

Figure 2. Representative vocalizations of each of the three categories of 50 kHz vocalizations; (A) simple, (B) frequency-modulated, and (C) harmonic.

Figure 3. Representative frequency-modulated vocalizations from a single rat at (A) baseline, (B) post-PD induction, and (C) after vocalization training.

There are many factors to consider when using this protocol. First of all, despite genetic homogeneity and procedural consistency, rats have a variable response to training. Some rats naturally vocalize more than others,5 or are motivated by exposure to a female more than by a food or water reward. One way we account for this variability is by examining the change in acoustic parameters from individual rats' baseline vocalizations to their post-lesion and post-training vocalizations. Although not discussed in this protocol, we also have behavioral assays to quantify interest in the female, such as latency to mount. Additionally, depending on the age and activity level of an individual rat, a wire top may be needed on the home cage during training to prevent escape. Despite individual variability, we have successfully used this protocol on a variety of strains and ages to improve vocalizations relative to each individual rat's baseline.

Rats are sensitive to seemingly small changes in the environment, such as scents, temperature, and personnel. An effort should be made to avoid scented personal care products, such as lotions, hair products, and perfumes. Before attempting training, an individual must be comfortable interacting with and handling rats. Furthermore, any inconsistencies in personnel or environment may affect the rats' vocalization response.

Because rats are nocturnal, they should be kept on a reversed light cycle to allow for training to take place during the dark portion of their cycle when they are most active. We illuminate our training room with red lights. Additionally, if a water reward is used during training, rats should have restricted access to water. Our rats are water restricted for 21 hours prior to the training session. Three hours of water exposure was determined by our Institutional Animal Care and Use Committee to be the least restrictive time period that allowed water to be useful as reinforcement in our behavioral studies without presenting a substantial compromise to animal health or well being. Rats are given access to water at random times (10 minutes to 30 minutes) after training and subsequently have free access to water for three hours during the dark portion of their light cycle. Rats should be inspected every day for signs of dehydration and weighed every other day to ensure there is no significant (greater than 10%) weight loss. A food restriction is not necessary if using a food treat as a reward. Treats specific to rats are commercially available, but we have found a small piece of a sugary cereal to be an effective reward.

As mentioned above, female rats in estrus elicit a higher vocalization response from males than non-sexually receptive females. By maintaining a large number of females in the colony, there is a high likelihood that at least one female will be in estrus on any given day. However, estrus can also be pharmacologically induced in female rats by subcutaneously injecting 10 μg of β-estradiol in 0.1 cc sterile sesame oil 48 hours prior to training followed by 500 μg of progesterone in 0.1 cc sterile sesame oil 4 hours before training. Additionally, male rats that are naive to female rats must be sexually experienced prior to vocal training. This is accomplished by placing a female rat that is exhibiting signs of sexual receptivity (darting, lordosis, ear wiggling) into the male's home cage until the male mounts and ejaculates. Males may not mount during the first few sessions and the female may be removed after the male shows interest in the female by sniffing and/or chasing the female around the cage. Sexually experiencing is done once a day for two weeks. This time period also provides an opportunity for rats to habituate to the experimenter(s) and recording room.

One limitation to this method is the subjective determination of the vocalization type. In addition, this factor limits the speed of data collection, as each call must be independently examined and manually classified. Related to this is the importance of having experienced raters who have been consistently trained in vocalization identification. Both intra and inter-rater reliability should be assessed within your own lab.

In summary, ultrasonic vocalizations in rodents are used in many different models to study brain-behavior relationships, including emotional states, reward and addiction, and disease states, such as autism.6,14-16 This novel method is a way to study the mechanisms underlying targeted vocal training for the treatment of voice deficits in aging and Parkinson Disease. This method has the potential to be applied to other disease models which affect communication and voice.

Experiments on animals were performed in accordance with the guidelines and regulations set forth by the Public Health Service Policy on Humane Care and Use of Laboratory Animals, the NIH guide for care and use of laboratory animals, and the animal welfare act. The animal use protocol was approved by the Institutional Animal Care and Use Committee (IACUC) of the University of Wisconsin-Madison School of Medicine and Public Health. 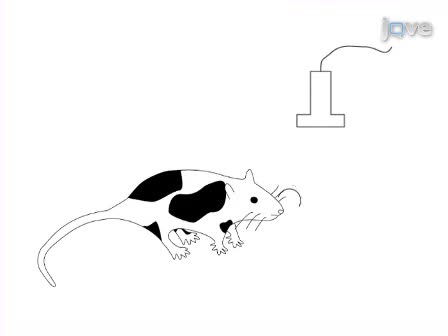