A powerful model for perioperative and critical care related acute kidney injury is presented. Using whole body hypoperfusion induced by cardiac arrest it is possible to nearly replicate the histologic and functional changes of clinical AKI.

Acute Kidney Injury (AKI) is a common, highly lethal, complication of critical illness which has a high mortality1-4 and which is most frequently caused by whole-body hypoperfusion.5,6 Successful reproduction of whole-body hypoperfusion in rodent models has been fraught with difficulty.7-9,9,10 Models which employ focal ischemia have repeatedly demonstrated results which do not translate to the clinical setting, and larger animal models which allow for whole body hypoperfusion lack access to the full toolset of genetic manipulation possible in the mouse.11,12 However, in recent years a mouse model of cardiac arrest and cardiopulmonary resuscitation has emerged which can be adapted to model AKI.13 This model reliably reproduces physiologic, functional, anatomic, and histologic outcomes seen in clinical AKI, is rapidly repeatable, and offers all of the significant advantages of a murine surgical model, including access to genetic manipulative techniques, low cost relative to large animals, and ease of use. Our group has developed extensive experience with use of this model to assess a number of organ-specific outcomes in AKI.14,15

All procedures described are conducted in accordance with the National Institutes of Health guidelines for the care and use of animals in research and all animal protocols were approved by the Oregon Health & Science University Institutional Animal Care and Use Committee. 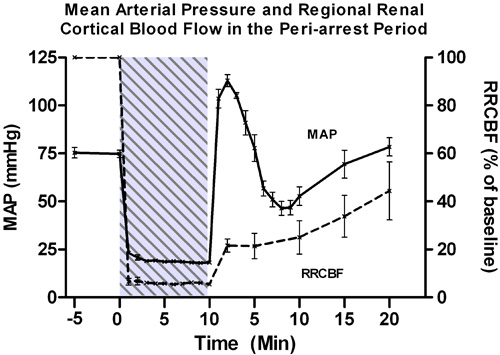 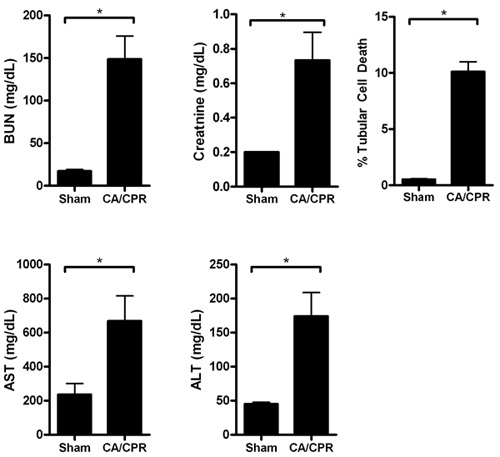 Figure 3. Western blot performed using polyclonal antibody to neutrophil gelatinase-associated lipocalin (NGAL), a sensitive indicator of renal ischemic injury. Urine samples were obtained immediately prior to (“pre”) and 24h after (“24h”) CA/CPR in 4 animals (labeled a, b, c, and d above). NGAL is massively upregulated in mouse urine after CA/CPR. Reprinted with permission from14.

Figure 4. A) Hematoxylin and eosin stain of a short axis hilar section of renal tissue 24h after CA/CPR. There is patchy but clear damage to medullary and corticomedullary tubules with tubular plugging. Arrows point to damaged tubules with swollen, pyknotic nuclei at the corticomedullary junction. B) Flouro-jade B stain of the same region in the same animal, 24h after CA/CPR. Fluoro-jade B stains necrotic cells bright green, showing patchy corticomedullary tubular necrosis. Arrows point to brightly stained damaged tubules at the corticomedullary junction. These findings are substantially similar to renal biopsy findings from humans who develop AKI, and unlike those produced by other animal models of AKI.

The normothermic model of cardiac arrest and cardiopulmonary resuscitation in the mouse offers multiple avenues of evaluation in a model which replicates the pathophysiology and morphology of the most common clinical cause of AKI, whole-body hypoperfusion. Hypothesis testing may be aided by access to a panoply of genetic manipulation techniques and the well-understood and characterized anatomy and physiology of the laboratory mouse.

As described here, survival in experienced hands is 80%. Although the surgical preparation and post-arrest care are straightforward, the actual resuscitation of an arrested mouse is a challenging surgical skill which requires significant practice. In our experience, successful resuscitations become the norm after about the first 30-50 attempts at resuscitating individual animals by an inexperienced surgeon, and consistent injury and resuscitation take additional practice. In particular, during the early phase of learning the technique (i.e., for the first 20 animals), meaningful survival is unlikely, and any survivors should be euthanized immediately after resuscitation to prevent unecessary distress. After early training, when survivors demonstrate vigorous cardiac recovery in the minutes following resuscitation, it is appropriate to continue surviving animals through the 15 minute post-ROSC mark. Animals that demonstrate vigorous spontaneous respiratory efforts by that point will likely survive 24h with appropriate recovery. This practice phase should be specifically addressed in IACUC protocols. The most difficult skill to learn is the chest compressions themselves as it is difficult to deliver compressions at the needed rate without increasing pressure to injurious levels. Mechanical resuscitators have been devised and used in our lab and others16 but to date no mechanical resuscitator for the mouse has produced acceptable survival.

There are some limitations to this model. First, no mouse model can fully model human physiology, and results must be interpreted with respect for interspecies differences. In particular, the mouse heart is robust; we achieve 80% survival at 8 minutes of cardiac arrest, but in clinical studies human survival is less than 50% even with resuscitation beginning 2-3 minutes after arrest.17 The small size of the mouse renders procedures technically exacting, and there is a significant learning curve, particularly for chest compressions. Second, in this protocol, drug doses and ventilator settings are not indexed to animal weight. This is because we use only animals in the 20-25 g weight range in order to minimize the effect of equipment size. For example, we use a 22 gauge catheter to intubate the trachea; the seal obtained is not the same in a 30 g mouse as it is in a 25 g mouse and the increased gas leak may be physiologically significant. However, the use of animals in a defined weight range does not faithfully reproduce the variety of body classes that are subject to clinical ischemia-reperfusion injury. Third, the no-flow state may not faithfully replicate results from low-flow states. In particular, temperature gradients may develop within the mouse during no-flow. To minimize the effect (if any) of gradients on results, temperature is measured near the organ of interest. Finally, because of early data from our lab which confirmed significant metabolic acidosis in the postarrest period, we hyperventilate during resuscitation. As recent data indicate that hyperventilation during CPR is deleterious,18,19 it is possible that this practice reduces survival in the model. Many alternatives models for whole-body ischemia reperfusion injury exist. For example, CA/CPR has been described in dogs,20 rabbits,21 lambs,22 pigs,23 rats,16 and arctic ground squirrels.24

We have shown that postoperative renal function may be evaluated by a number of chemical, immunological, or histological techniques at 24 hours. Animals can be survived for longer than 24h, however, and the transient nature of AKI makes this model an attractive one to use for investigation of mechanisms of recovery and/or permanent injury. The injury itself is titratable by altering the parameters of time and temperature during CA. Longer arrests and maintenance of higher temperatures produce greater injury (but adversely effect survival). As we have shown with the included liver function data, other organ systems are also affected and may be investigated using adaptations of this model, however, significant effort may be required to optimize experimental conditions for the organ system of interest. 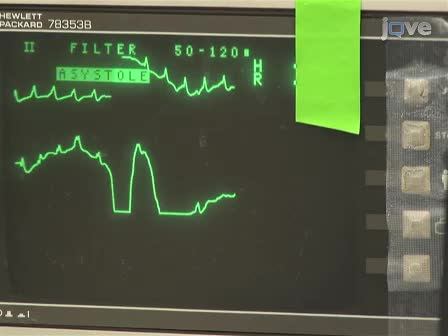