This article describes the basic procedures for conducting optical mapping experiments in the Langendorff-perfused rabbit heart using the panoramic imaging system, and the dual (voltage and calcium) imaging modality.

Optical imaging and fluorescent probes have significantly advanced research methodology in the field of cardiac electrophysiology in ways that could not have been accomplished by other approaches1. With the use of the calcium- and voltage-sensitive dyes, optical mapping allows measurement of transmembrane action potentials and calcium transients with high spatial resolution without the physical contact with the tissue. This makes measurements of the cardiac electrical activity possible under many conditions where the use of electrodes is inconvenient or impossible1. For example, optical recordings provide accurate morphological changes of membrane potential during and immediately after stimulation and defibrillation, while conventional electrode techniques suffer from stimulus-induced artifacts during and after stimuli due to electrode polarization1.

The Langendorff-perfused rabbit heart is one of the most studied models of human heart physiology and pathophysiology. Many types of arrhythmias observed clinically could be recapitulated in the rabbit heart model. It was shown that wave patterns in the rabbit heart during ventricular arrhythmias, determined by effective size of the heart and the wavelength of reentry, are very similar to that in the human heart2. It was also shown that critical aspects of excitation-contraction (EC) coupling in rabbit myocardium, such as the relative contribution of sarcoplasmic reticulum (SR), is very similar to human EC coupling3. Here we present the basic procedures of optical mapping experiments in Langendorff-perfused rabbit hearts, including the Langendorff perfusion system setup, the optical mapping systems setup, the isolation and cannulation of the heart, perfusion and dye-staining of the heart, excitation-contraction uncoupling, and collection of optical signals. These methods could be also applied to the heart from species other than rabbit with adjustments to flow rates, optics, solutions, etc.

Two optical mapping systems are described. The panoramic mapping system is used to map the entire epicardium of the rabbit heart4-7. This system provides a global view of the evolution of reentrant circuits during arrhythmogenesis and defibrillation, and has been used to study the mechanisms of arrhythmias and antiarrhythmia therapy8,9. The dual mapping system is used to map the action potential (AP) and calcium transient (CaT) simultaneously from the same field of view10-13. This approach has enhanced our understanding of the important role of calcium in the electrical alternans and the induction of arrhythmia14-16.

2. Harvesting and Perfusion of Rabbit Hearts 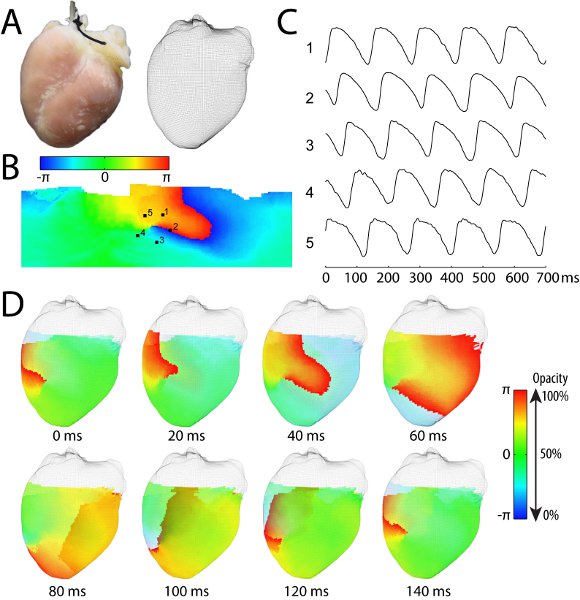 Figure 1. Representative results of a Langendorff-perfused rabbit experiment using the panoramic optical mapping system. (A) The anterior view of the rabbit heart and the reconstructed rabbit heart geometry in the form of a three-dimensional mesh-grid surface. (B) The unwrapped epicardial surface color-coded by the phase (obtained from the phase plane analysis18) indicating the wavefront shown in red during an episode of tachyarrhythmia. (C) The optical action potential recordings from five locations around the phase singularity marked by 1-5 in panel B. (D) Eight snapshots of activation wavefront (red color) propagation during a cycle of a stable reentrant arrhythmia. The wavefront circles clockwise around a phase singularity, which is visible at the anterior surface of the heart. The color for repolarization (blue) is set to be partially transparent so that the posterior wavefront is visible (e.g., at 80ms, 100ms, and 120ms). A movie of this reentrant arrhythmia is provided in the supplemental video 1. The methods for geometry reconstruction, signal registration, calculation of phase map, and surface unwrapping are described in details elsewhere6. 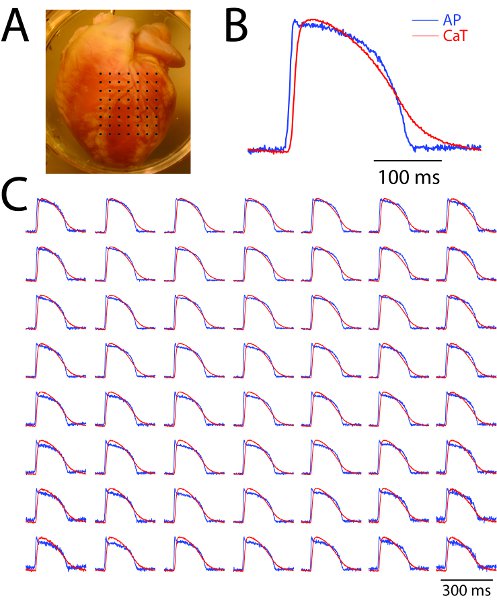 Figure 2. Representative results from a Langendorff-perfused rabbit heart experiment using the dual mapping system (simultaneous mapping of action potential and calcium transient). (A) The anterior surface of the heart with the mapping field of view covered by black dots. (B) A close-up view of recordings from one site. (C) Sample traces of action potential (blue) and calcium transient (red) from an array of evenly spaced locations marked by the black dots in panel A. Note that not all the pixel recordings are shown and the spatial resolution is 200μm.

Based on our experience, the keys for a successful Langendorff-perfused rabbit heart experiment include well-prepared Tyrodes' solution, quick harvest of the heart, well-maintained perfusion pressure, and appropriate pH of the oxygenated solution in the perfusion system. In order to record the signal with highest possible signal-to-noise ratio, we need to consider factors including light source, optical filters, focusing optics, photodetectors, etc19. Details of these aspects are discussed elsewhere19. Young rabbits (age: 4-5 months; weight: 7-9 pounds) could be used to avoid the epicardial fat, which decreases the signal to noise ratio of the optical signals.

The signal recorded by each pixel is a weighted integration of emitted light from a volume of tissue. The depth of this tissue volume depends on the excitation and emission wavelengths of the dye used. For di-4-ANEPPS, as an example, the estimated penetration depth is 300μm in the rabbit heart20. Thus, interpretation of the optical signal should be done with caution when the local heterogeneity of electrical function are present in sinoatrial node, atrioventricular node, and during ventricular arrhythmia 1,21,22.

One limitation of the optical mapping technique compared with electrode recording is that the repolarization phase of the optical action potential is often distored by motion artifact caused by cardiac contraction. Mechanical constraint could be used to reduce the artifact, but cannot completely eliminate it. In comparison, pharmacological excitation-contraction uncouplers are effective in removing the motion artifact. However, these uncouplers (e.g. 2,3-Butanedione Monoxime) could have significant electrophysiological side effects. Blebbistatin was demonstrated to have no adverse side-effects on the cardiac electrophysiology in the normal heart23, and is thus a promising uncoupler for optical mapping. It should be noted that the acceleration of edema due to the abolishment of the contraction could also affect the electrophysiology. 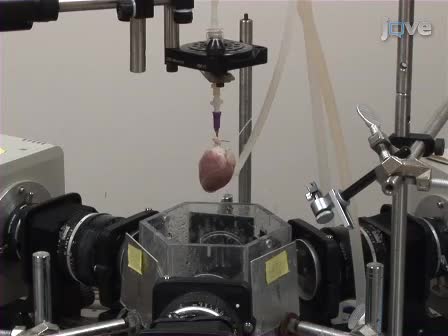