A lensless on-chip fluorescent microscopy platform is demonstrated that can image fluorescent objects over an ultra-wide field-of-view of e.g., >0.6-8 cm2 with <4μm resolution using a compressive sampling based decoding algorithm. Such a compact and wide-field fluorescent on-chip imaging modality could be valuable for high-throughput cytometry, rare-cell research and microarray-analysis.

On-chip lensless imaging in general aims to replace bulky lens-based optical microscopes with simpler and more compact designs, especially for high-throughput screening applications. This emerging technology platform has the potential to eliminate the need for bulky and/or costly optical components through the help of novel theories and digital reconstruction algorithms. Along the same lines, here we demonstrate an on-chip fluorescent microscopy modality that can achieve e.g., <4μm spatial resolution over an ultra-wide field-of-view (FOV) of >0.6-8 cm2 without the use of any lenses, mechanical-scanning or thin-film based interference filters. In this technique, fluorescent excitation is achieved through a prism or hemispherical-glass interface illuminated by an incoherent source. After interacting with the entire object volume, this excitation light is rejected by total-internal-reflection (TIR) process that is occurring at the bottom of the sample micro-fluidic chip. The fluorescent emission from the excited objects is then collected by a fiber-optic faceplate or a taper and is delivered to an optoelectronic sensor array such as a charge-coupled-device (CCD). By using a compressive-sampling based decoding algorithm, the acquired lensfree raw fluorescent images of the sample can be rapidly processed to yield e.g., <4μm resolution over an FOV of >0.6-8 cm2. Moreover, vertically stacked micro-channels that are separated by e.g., 50-100 μm can also be successfully imaged using the same lensfree on-chip microscopy platform, which further increases the overall throughput of this modality. This compact on-chip fluorescent imaging platform, with a rapid compressive decoder behind it, could be rather valuable for high-throughput cytometry, rare-cell research and microarray-analysis.

Our lensless on-chip imaging platform comprises several optical components including a digital sensor array (e.g., a CCD chip), an incoherent illumination source, a prism, an absorption filter, a fiber-optic faceplate or a fiber-optic taper. As shown in Fig.1, these components are assembled with micro-fluidic devices to achieve fluorescent imaging of a large sample volume on a chip, without the use of any lenses, mechanical scanners or thin-film based interference filters.

Starting with the next sub-section, we will provide further details of our sample preparation steps.

In this lensless imaging platform, two different algorithms are used to digitally increase the resolution of the system, namely the Lucy-Richardson deconvolution and Compressive sampling based decoding. Through the use of these digital processing methods, we quantified the resolution enhancement that can be achieved with each approach by resolving closely packed bead-pairs (see Figs. 5-6). The reconstructed lensfree fluorescent images can then be pseudocolored (if desired) to highlight the natural color of the micro-objects, which surely requires prior knowledge of the fluorescent signal wavelength, unless a color (e.g., an RGB: red-green-blue CCD/CMOS) sensor-chip is used. For these digital processing methods, custom-developed algorithms are used that only require a CPU (e.g., a 3.2 GHz Processor, Intel Core). Potentially, next-generation graphics processing units (GPUs) could also be used for faster processing. In addition to imaging, if needed, the decoded fluorescent objects can also be automatically counted using a custom-developed interface (see Fig. 8) for on-chip cytometry applications.

An overview of our set-up is shown in Figure 1, with several optical components that are used in its assembly. Key features of our on-chip microscopy platform are explained in Figure 2, including fluorescent excitation and detection, total internal reflection as well as partially-coherent illumination for holographic transmission imaging on the same platform. Lensless fluorescent on-chip imaging results of a heterogeneous mixture containing various micro-particles (4 μm green and 10 μm green/red) are shown in Figures 3-4. Comparison of Lucy-Richardson deconvolution and Compressive Sampling/Sensing based decoding is provided in Figure 5 for digitally enhancing the resolution of raw lensless fluorescent images. Compressive decoding enabled spatial resolution (<4 μm) is quantified in Figure 6. Lensless on-chip microscopy of fluorescently labeled white blood cells is illustrated in Figure 7, which also provides comparison images taken with a conventional fluorescent microscope. Finally, our automated fluorescent object counting interface is shown in Figure 8. 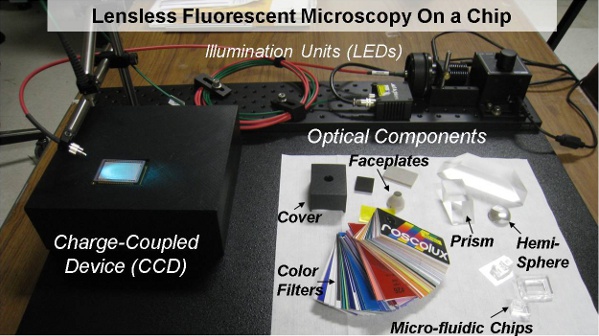 Figure 1. Overview of our lensless on-chip imaging set-up is shown with several optical components that are used in its assembly. 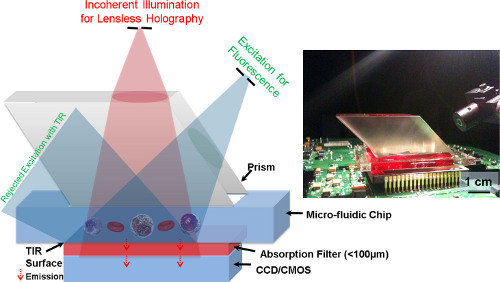 Figure 2. The schematic diagram of on-chip lensfree fluorescent imaging platform is shown (left image). Fluorescence excitation is achieved through the side facet of a rhomboid prism using an incoherent source. The experimental set-up of our on-chip fluorescent imaging platform is also shown (right image). Whole blood sample within a microfluidic chip (dimensions: 2.5 x 3.5 x 0.3 cm) was excited through the prism interface, where index matching oil was used to assemble the chip and the prism. Upon rejection of the excitation light by TIR and the color filter, only the fluorescent emission from the labeled blood cells was recorded by our CCD sensor chip (KODAK 11002) over an FOV of ~2.5 x 3.5 cm. 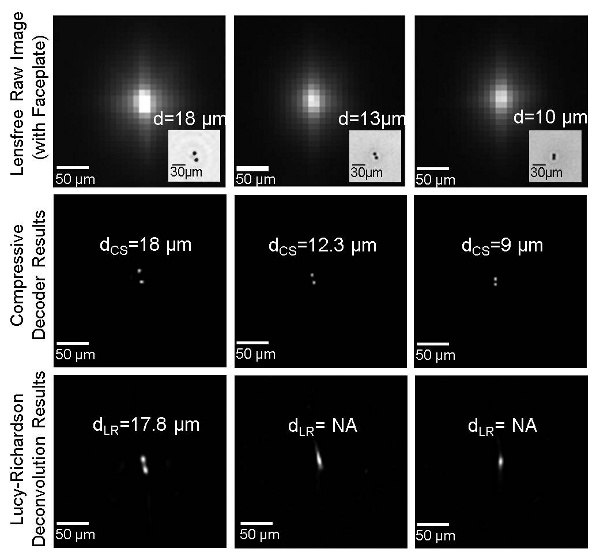 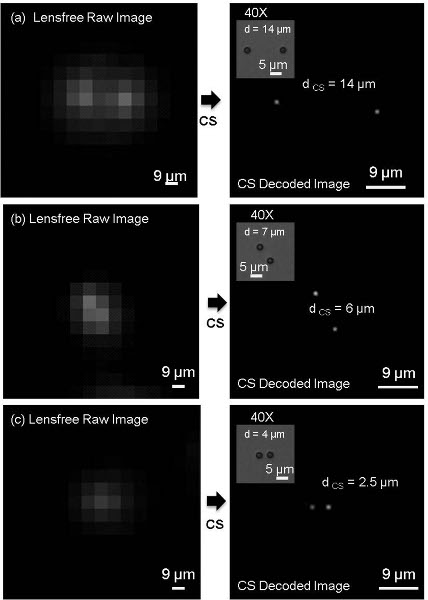 Figure 7. Lensless imaging of fluorescently (SYTO 16) labeled white blood cells is illustrated. The raw lensfree images are rapidly decoded using a CS based decoder, which agrees very well with a conventional microscope image of the same sample that is acquired with a 10X objective lens. 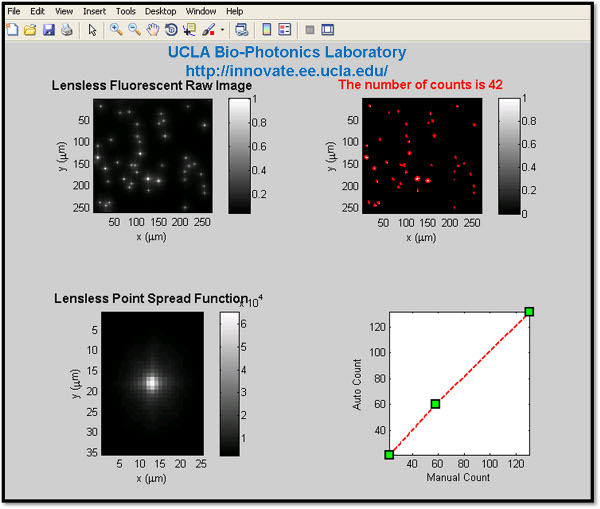 We demonstrated an on-chip fluorescent microscopy platform that can achieve e.g., <4μm spatial resolution over e.g., >0.6-8 cm2 field-of-view without the use of any lenses, mechanical-scanning or thin-film interference-filters. In this technique, with the use of a fiber-optic faceplate or a taper, the fluorescent emission from the objects is collected with a 2D-array of fiber-optic cables before being delivered to an opto-electronic sensor-array such as a CCD/CMOS chip. These acquired lensfree images are then rapidly processed to yield <4μm resolution over >0.6-8 cm2 field-of-view using a compressive sampling/sensing based decoding algorithm. Such a compact and wide-field fluorescent imaging platform might be quite useful for high-throughput cytometry, rare-cell research as well as for microarray-analysis.

A. Ozcan gratefully acknowledges the support of NSF CAREER Award, the ONR Young Investigator Award 2009 and the NIH Director’s New Innovator Award DP2OD006427 from the Office of The Director, NIH. The authors also acknowledge the support of the Bill & Melinda Gates Foundation, Vodafone Americas Foundation, and NSF BISH program (under Awards # 0754880 and 0930501). 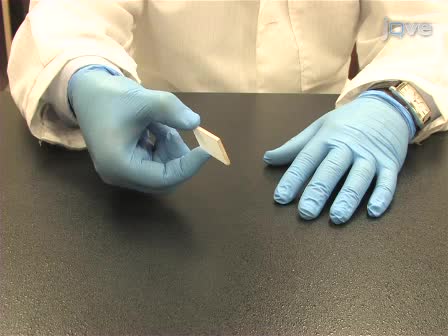